Tommy stumbled as the corridor plunged into absolute darkness, completely disoriented he could hear the dragging feet of the infected behind him, or were they beside him? In the dark the noises seemed closer and more threatening (if that was possible!). Somewhere back there the awful female zombie was reaching out for him, he could almost feel her cold, dead hand brushing the back of his neck.  Throwing himself forward in a full dive, desperate to create distance from the macabre female, he crashed into the heavy wooden doors causing them to burst open letting in the bright light from outside.  Scrambling on all fours, he threw himself out of the building and onto the flagstones of the pathway leading into the main entrance to the hospital. A forlorn groan which sounded, to Tommy at least, like that of frustration that their prey was escaping gave wings to his feet as he ran for his life toward the main road. 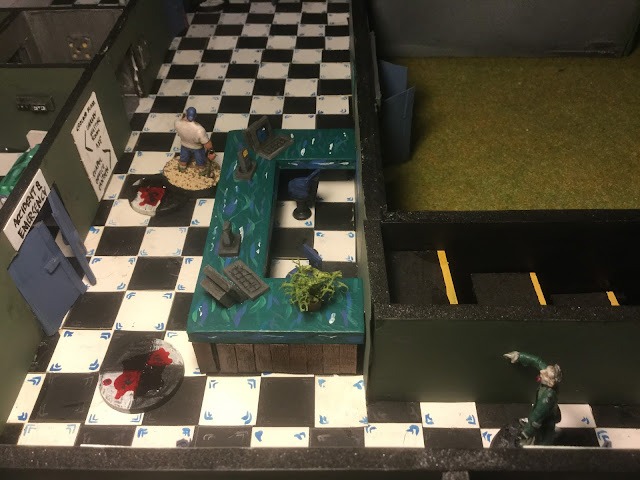 Anna screamed as the stairwell lights extinguished, halfway up the stairs she tripped on a riser barking her shin and causing her to scream again. Behind her Chris, groped blindly forward, desperately trying to make contact with his fiancé, frantic at her cries of pain.  “I'm ok” she called back in an effort to calm the big man, all the while trying to master her own fear in the oppressive darkness. Somewhere behind them were a mass of infected patients and hospital employees, she could hear them groaning and shuffling toward the sounds made by Anna and the guys as they tried to work their way up the stairs. They had to get out of the hospital, she knew that now, the sheer volume of potential ‘zombies’ was staggeringly high and was a death sentence.  Unfamiliar with the layout of the hospital (apart from A&E) and now hampered by the failure of the lights, the young medic struggled not to panic as dropped to hands and knees, crawling up the steps. 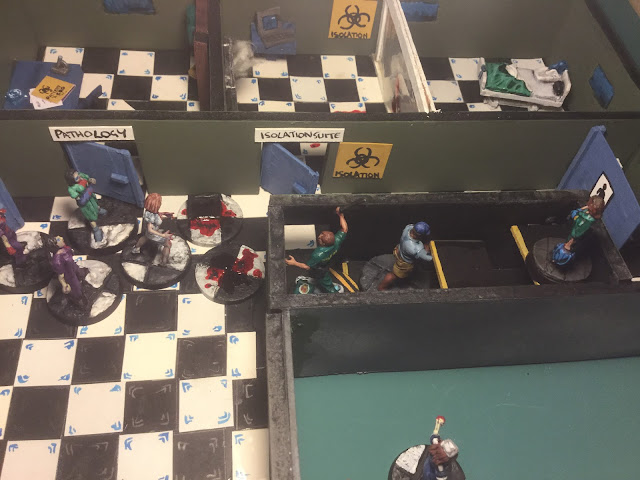 Gobbo swung wildly with the oxygen cylinder, sweeping it blindly in front of him and batting at the hands of the closest zombies. Back-pedalling slowly, testing each footstep as he went Andy fought to keep the infected at bay and give the young couple a chance to get away. He could hear them stumbling on the stairs, his heart lurching in fear for his friends at every cry and curse as they slowly ascended the emergency stairwell. He knew they were close to getting out, these last few stairs led to the rooftop helipad where they would find an external fire escape and they could flee this nightmare and get home. His thoughts flicked instantly back to his family and he misstepped at the sudden thought of the danger that they were facing, this was looking like an epidemic and here he was miles away. He needed to get back to them, now! He had managed to compartmentalise thoughts of them in order to deal with the immediate threat but now the images of them fighting off these beasts came thick and fast. Staggering backward, he dropped to one knee as the press of bodies became too much, holding the cylinder across his chest he batted the reaching hands away trying to keep the infected at arms length. Despair threatened to overwhelm Andy, the improvised weapon dropped slightly as he tired, the weight of the cylinder doubling in seconds or so it felt to the exhausted medic.

A sudden image of his strong, capable son – Stephen battering at the ‘zombies’ with strong kicks and punches developed through his martial arts fascination.  This was followed by images of his brave daughter - Astrid and staunch wife – Lisa standing side by side, chopping with the decorative axe and stabbing with the fantasy sword that had adorned the Gobbo’s man cave wall. The images flickered faster and faster through his brain, hordes of zombies at the gate of his neat, little house, crashing against the door, pouring through his narrow hallway… 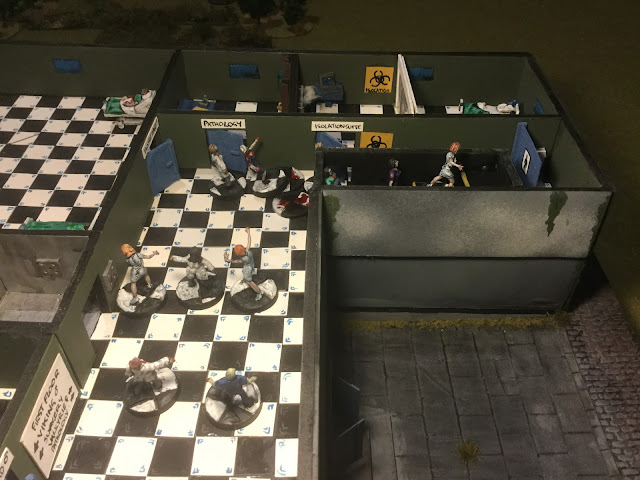 “NO!!!” With a roar of defiance, he thrust the oxygen cylinder out like a quarter staff as he surged to his feet, bowling over the nearest zombies and forcing them away.  Swinging the weapon in a wide arc and gaining space just as the stairwell flooded with daylight when Anna reached the rooftop access and flung open the trapdoor.  Turning on his heel, he smashed the regulator of the cylinder hard against the concrete step, letting go instantly and watching as the highly pressurised container launched like an Exocet missile down the corridor, spinning and whipping around and battering the remaining infected. Sprinting up the stairs, he followed the retreating form of Chris as he disappeared onto the roof. 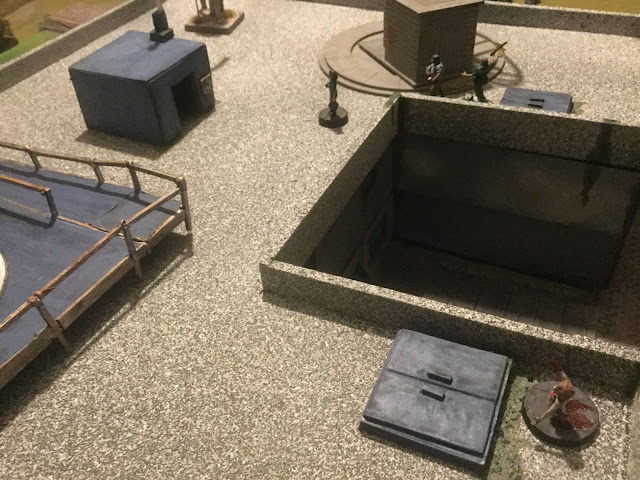 Bursting into the bright sunlight, Andy stumbled as he cleared the stairwell and hit the flat roof.  The empty helipad, itself a large steel structure dominated the area and concealed the fire escape on the far side. Ahead Anna and Chris were angling away from a zombie that was crawling across the rooftop, turning occasionally to keep the slow moving creature in sight. Andy could hear the infected shuffling up the steps behind him and he put his head down, running toward the young couple and the supposed safety of the fire escape, it was time to go home. 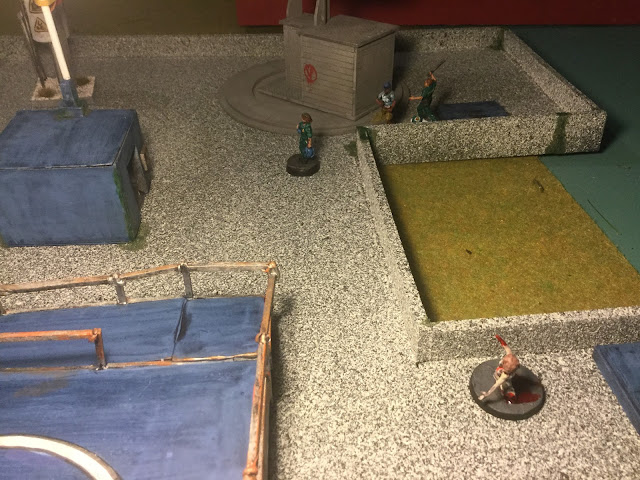 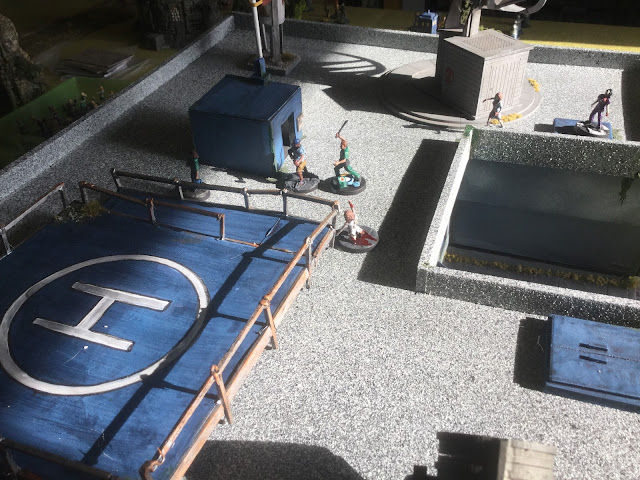 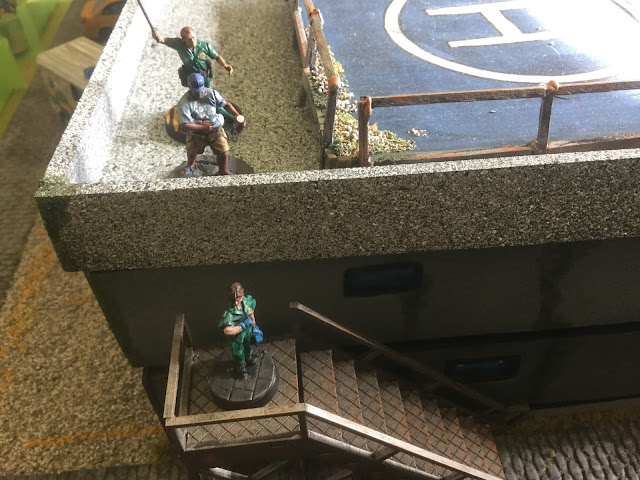 so that concludes this chapter in Day One, yes it's still Day One in my campaign!  Loads of plot points to consider and I'll be thinking on how these develop into a story arc for Gobbo and co. But for now we'll leave him heading toward his family.

Chris trailed behind his fiancé as she ran toward the ambulance bays, his mind racing with unusual thoughts. Normally an easygoing, happy go lucky fella - Chris was beset by horrible violent images parading randomly across his tortured psyche and had been since the great storm that had lashed the island.  Anna reached the vehicle, frantically pressing the fob and disengaging the locks before throwing the thick medical file into the cab. Chris eyed the folder suspiciously, noting the spidery handwriting from the admitting A&E doctor and the tiny neat script of the “other” specialist that had examined him.  That dude had scared him a little, although physically unimposing, he had somehow managed to exude a sense of unease among the regular doctors . The big man watched as Gobbo (what kind of ridiculous nickname was that?) jumped in an abandoned “truck” and headed home to get his family. Chris was glad that the older medic had gone, he was a little too handy with an oxygen cylinder and had been giving him strange looks since the rescue, he was sure of it. Anna gunned the engine of the ambulance with a heavy right foot on the gas, jolting Chris out of his thoughts and into the cab to join his fiancé. A sudden bang on the drivers side accompanied by a lurch of the ambulance, forced a scream from Anna as a diseased porter threw himself at the vehicle and the tasty morsels inside. Distracted by the infected, the young medic missed the thick medical file being stowed into the glove box. As Putters peeled away in a cloud of tyre smoke, Chris grinned wolfishly out of the window – alone at last…