This week I was going to post about the gaming convention Uncon, that I was hosting games for. It was a rather awesome weekend and I was buzzing when we finished on the Sunday evening, with my games going down very well indeed. I was all set to produce a glowing post and I went to bed in fine spirits.

Unfortunately I had that dreaded early morning phone call... my dad has passed away. So here I am with very little enthusiasm for blogging and no desire to post for a while. I will still be hobbying, painting has always been a way of relaxing and de stressing and I will keep gaming. However, I won’t be blogging for a while until I can get my head straight and my posting mojo high again. Rest assured I still enjoy reading my favourite blogs but it is unlikely I will comment frequently.

Thanks for your patience
dGG aka Andy
Posted by Da Gobbo at 23:17 15 comments:

U-Boot the board game


Over the last couple of years I've backed a number of new Kickstarters, mostly smaller campaigns that fulfilled nicely and on time.  Last week, I received the KS that I have been (im)patiently waiting for - I was literally humming as I camped out by my front door! 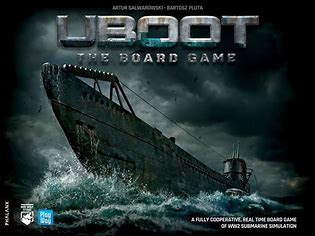 U-Boot the board game is the brain child of two Polish designers Artur Salwarowski and Bartosz Pluta from Iron Wolf Studios and published by Phalanx Games.  The game is a WW2 submarine simulator and played on a 3d model of a U-Boot alongside a companion app.  This is from the designers themselves...

"Thank you very much for purchasing U-BOOT The Board Game. When we started this project, we set ourselves a goal: to create the first ever tabletop submarine simulator. A game that would let players experience World War II submarine warfare like no other game before it. One that would explore various aspects of living and fighting at sea, from dwelling inside an iron coffin to playing a deadly game of cat and mouse with the enemy.

Now, after a lot of hard work and research, we are proud to present a game that redefines submarine board gaming, featuring true to life navigation, visual identification of targets, and many other elements that you probably haven’t seen in a board game yet. This might seem daunting, but rest assured: the game comes with everything you need to become a U-boat ace in no time.

Firstly, a separate Tactical Guide booklet. It lays out the most important dos and don’ts without getting into unnecessary detail, so you should quickly get an idea of how to conduct combat. Secondly, player aids that summarize the most important information for each role and, lastly, online videos that teach you how to play. All of these will help you understand the basics quickly. Once you do that, the rest will come with experience.

And the experience that U-BOOT can deliver is truly unique. Approaching targets without getting detected, lining up perfect torpedo shots, and sneaking away from the escorts’ counterattack… Or getting pounded by relentless depth charge attacks. This game has it all and much more, so if you wish to savor it to the fullest, be serious about your training. Trust us: it will be worth it."

I don't think I could have stated it any better!  What I can tell you is that this is the literally the best board game I've ever played. It is immersive, tense, exciting and extremely entertaining, a fantastic simulator that will only get better as the app develops and more missions get added, graphics improve and extra touches come into play.  Even better, you can play it solo (up to 4) and it works perfectly, so I can get my fix whenever I want!! 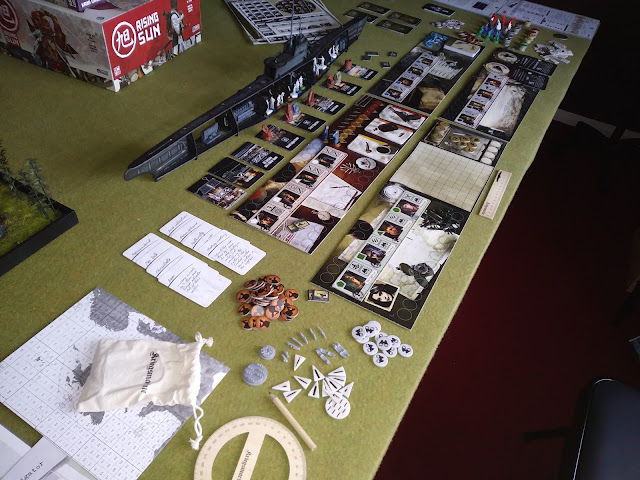 I backed the game with a fairly high pledge because I wanted the resin tokens and interior detail that just make the game pop. I've managed to paint the interior work but none of the other bits yet...

below is the navigator equipment, which is my favourite role.  You have a tactical map for when the action gets hot and the boat is submerged.  Using the attack wheel, the navigator can plot attack vectors for the capt to launch his salvos. 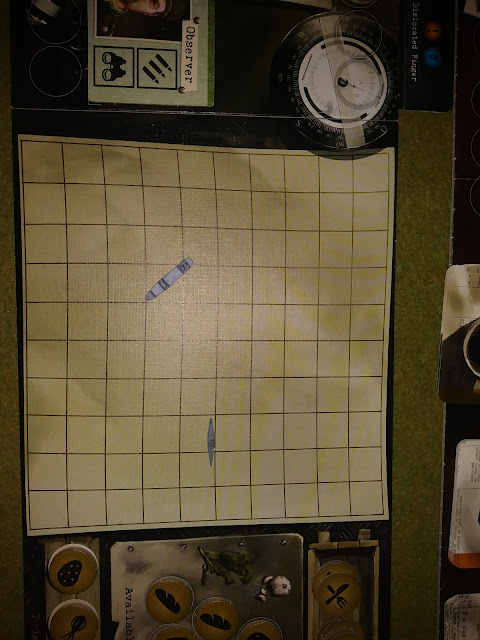 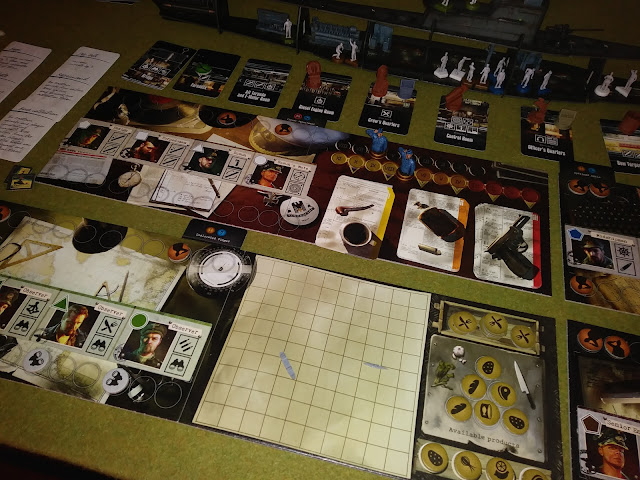 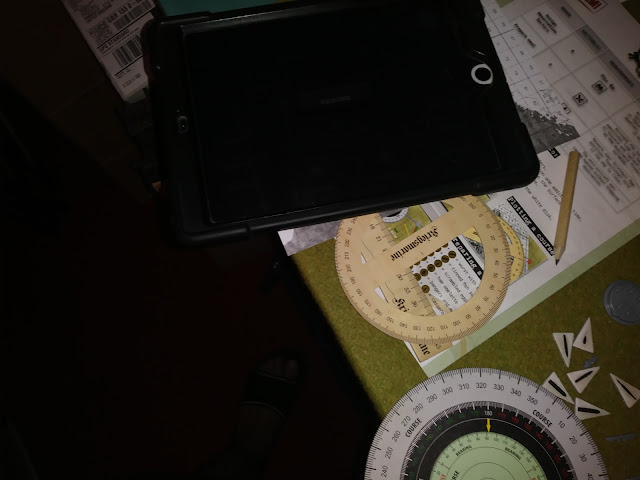 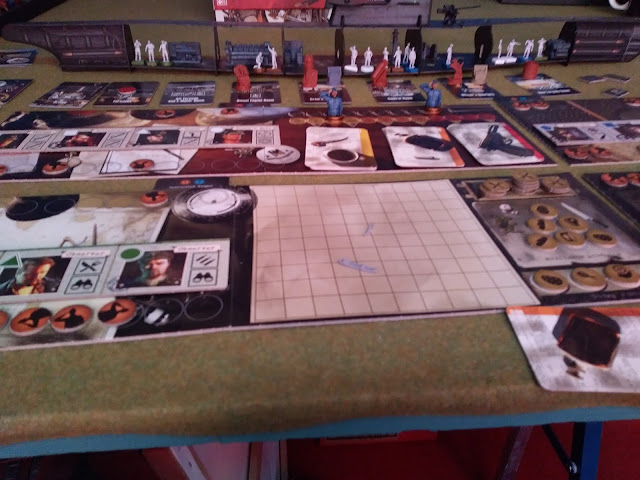 The Navigator passes on the information to the First Officer, who inputs it into the companion app and updates the TDC. He then relays the info to the Capt for orders. 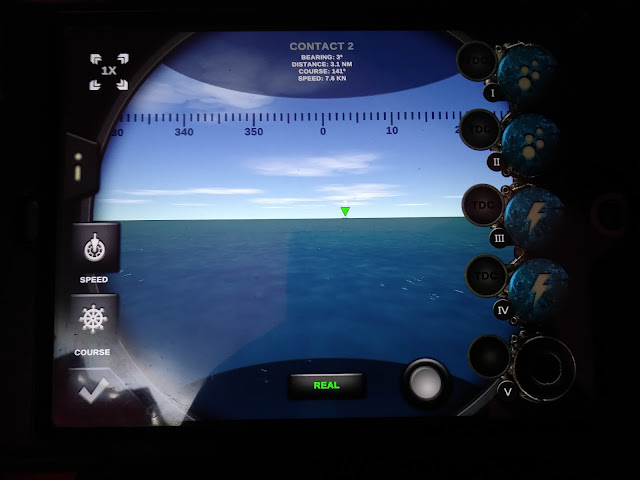 the video below was from my first training mission, a single unescorted freighter to practice on.  Normally there are escort ships for these groups and the covert stalk, launch and subsequent evasion makes for thrilling game play.

at the end of each mission you get your rating.  There are a few single missions and a campaign mode which I'm yet to try but will be starting real soon.  More missions will be added to the app as it gets more developed and I'm really hoping they will eventually add "Wolfpack" type scenarios where you can link in with other players via the app. 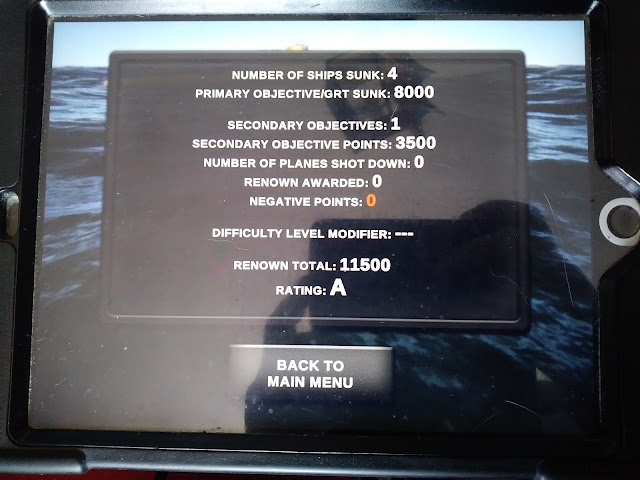 anyway, that's my initial thoughts on this game, i'm sure as I play through the missions more posts will follow. Next week will be post Uncon so I'll let you know how that went, of course anyone in the Kent area who fancies a weekend filled with amazing gaming and maybe even crewing up with me for a game of this awesome simulator then pop on down to Broadstairs and say hi