Normally my enthusiasm for long term projects would have seriously waned by now, hence the long gap from my old Warhammer part of the blog and the new multiple gaming system,all purpose part of the blog.  But I've really enjoyed putting my thoughts, projects and game reports out there and the interaction it has generated between like minded bloggers.  Without getting too watery and teary, if it wasn't for the regular commenters of my various posts then there wouldn't be incentive to carry on posting and producing some of the work I have to this point.  Those comments combined with the other blogs that i read have helped shape the projects I have worked and am now currently working on, so thank you. I guess the thank you list is essentially my followers list (small as it is lol)

Special thanks however must go to Bryan aka "Vampifan" whose suggestions on miniatures,websites, links and his generosity in sending through material that have directly benefited my gaming cannot be underestimated. Cheers dude!

i'm getting all gushy now so i think i'll go sit quietly in the corner of da Grotto and think about the next hundred posts i want to write, i already have a few things in mind......

Oh and before I forget I believe it's traditional to give away a small token when one reaches milestones so I guess I'd better do something in a similar vein.  Comment below on what your favourite post over the last 100 was (oh the vanity!!) I will randomly select a winner and send him/her a couple of miniatures from my collection for you to do what you will (ebay, collect dust in a corner, strip and reuse, game with.....)

Games Workshop, before they sold their collective souls to big business - ie 1987, produced this excellent solo board game.  It was one of the first solo games I played back in the day (I think I started gaming sometime in 1984)

The player takes on the role of the Chainsaw Warrior and has sixty minutes to navigate a labyrinth composed of an abandoned urban slum in New York, represented by two decks of cards, locate the entity Darkness attempting to destroy the city and kill it. The slum contains hazards, zombies, mutants and other creatures affected by Darkness, who will attempt to kill the player or slow him down. Failure to kill Darkness, either by running out of time, dying of injuries, or succumbing to zombie venom/radiation poisoning, resulted in a loss for the player.

The player has several attributes randomised by die roll at the start of the game, which affect hand to hand combat, marksmanship, ability to take damage and reaction time. There are also separate tracks to record the effects of zombie venom and radiation damage.
At the start of the game, the player is equipped with a random assortment of weapons and items (which can include the eponymous chainsaw) and a critical item called the Laser Lance, which is the only weapon capable of destroying Darkness. Loss of the Laser Lance or running out of ammunition for it resulted in the player being forced to leave the slums for a replacement, then re-enter after a time penalty.
Before we get too excited, no I'm not giving away Chainsaw Warrior the game.  I truly love the game so much, although I don't play it as often as I should (we all know that feeling!) However I will give away two of the three (i can't find the other!) miniature versions of the Chainsaw Warrior.  they aren't used in the game but they are a truly lovely set of miniatures.  I have stripped my 1990's paint jobs and redone them for this give away (but as stated above feel free to re-strip or whatever!) 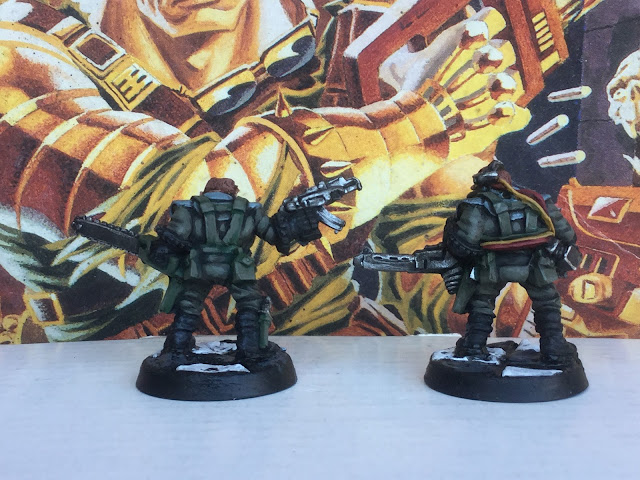 for the lucky (imho) winner, if you don't have Chainsaw Warrior there is an amazing blog "War Factory" and the guy on there is producing an interesting game adapting Chainsaw Warrior and Space Hulk.  In fact it looked so much fun that I very nearly kept the models, plus they're are very nearly the oldest, surviving models I have bar my War Wyvern.  I hope whoever wins them can find a good use for them.