My love for Bushido, the skirmish game from GCT Studio is well known among those who follow this blog. Despite my lack of mojo over the last few months and the distraction provided by the development of B,S&H, Bushido and the fabulous minis from their range is never too far onto the backburner.  This year at Salute, I hit the GCT stand first (as always!) and although I didn't smash my debit card, I did pick up some awesome models to bolster my factions.  Chief among them was Kosuke... 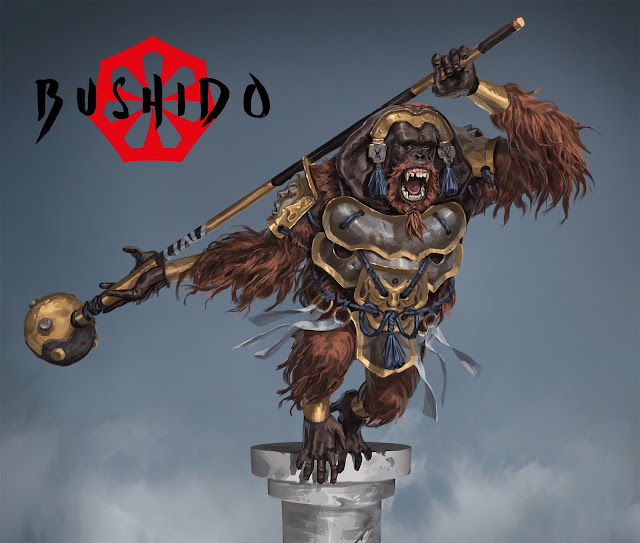 Kosuke hails from the mainland of the Empire. He fights with all four limbs, strength and skill are indistinguishable between arms and legs, hands and feet. He comes in aid of his fellow monks of the Ro-Kan and the prowess he shows on the battlefield will be well received by those he fights alongside. However his presence has caused disquiet amongst the Masters of the Ro-Kan. What message does Kosuke’s presence herald?

I think you can probably understand why I wanted this dude!!!  Sculpted by the talented Ban Calvert-Lee of Master Crafted Miniatures, Kosuke is a must have for me and my Temple of Ro-Kan warband. But not only is he an awesome sculpt, this ape can kick ass.... 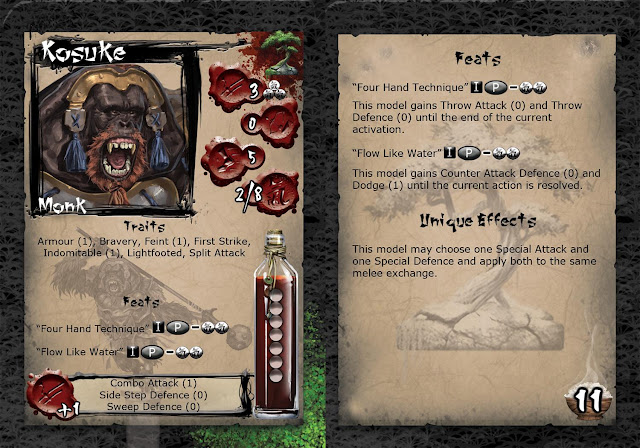 While his melee dice is 3, not bad but not as high as other Monks, Kosuke benefits from armour (1), unusual for Ro-Kan, he's Brave, and can force an opponent to reroll an attack dice with feint. He's gonna attack first due to his first strike ability and cannot be outnumbered easily.  What is best about this King of the Swingers though is his Ki Feats and Unique Effect, allowing him to use both a special attack and special defence, meaning that this mean ape is gonna pound on you and then throw you into the dirt!  I literally cannot wait to get this bad boy on the table... 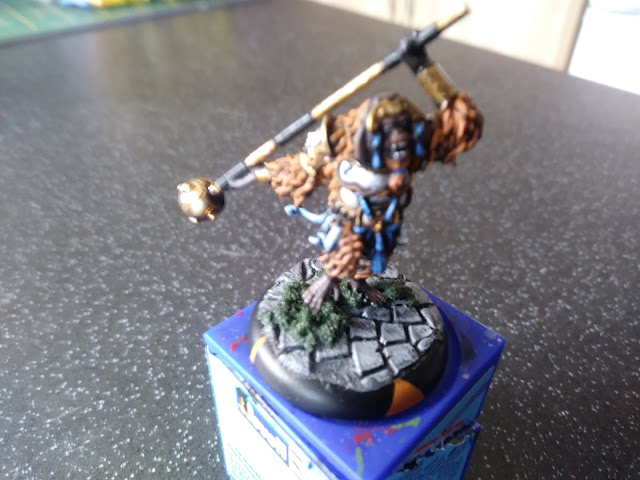 And here he is (sorry about my blurry photos) 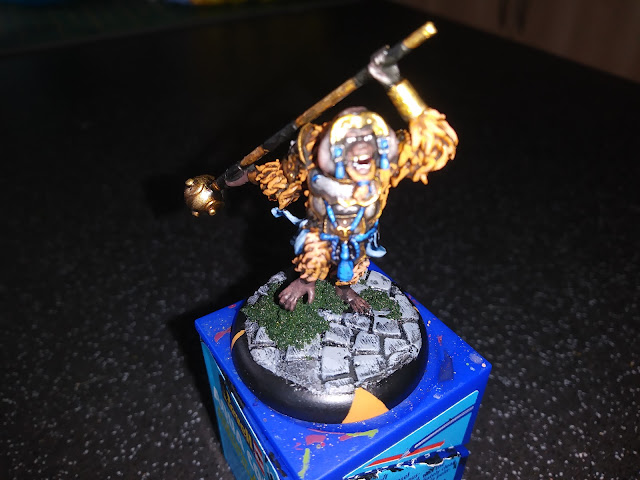 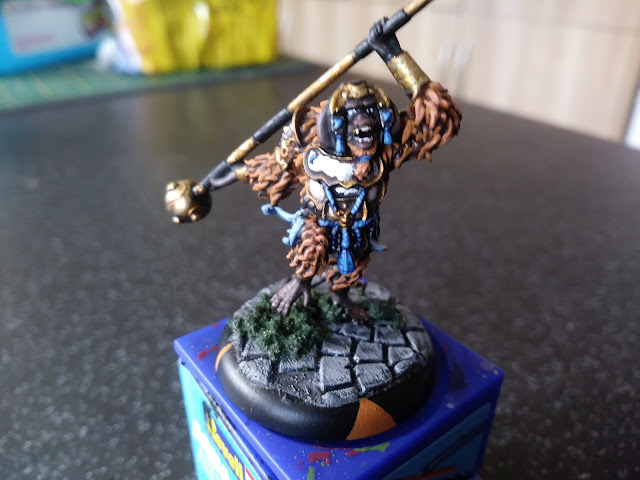 I stuck to the artwork colours as his orange hair more or less fit my faction colours anyway lol.  The base was made from Das clay and pressed with a roller from Green Stuff World.  Not my best work but seeing as it's my first mini in weeks, I'm fairly pleased. 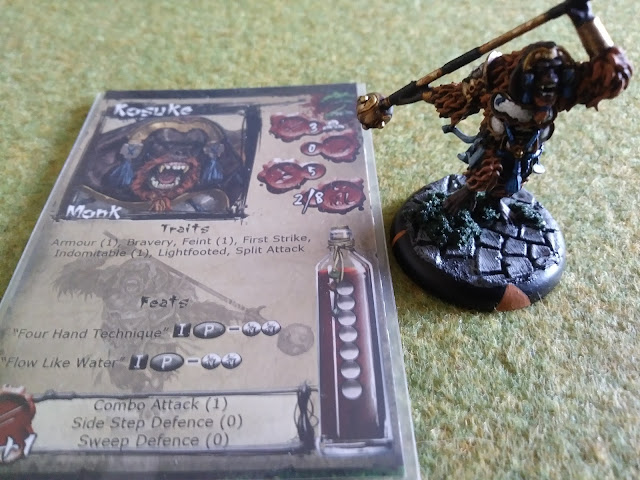 Kosuke will be a must have in my Ro-Kan warband and he will join what I hope is a relatively useful "Kids & Critters" line up. 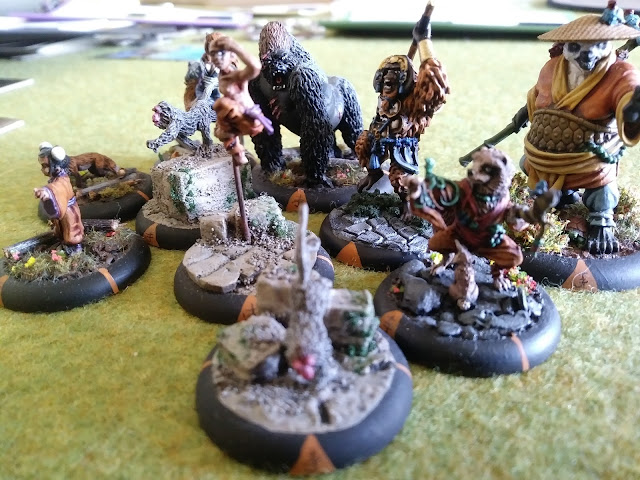 Kosuke will join Kuma and The Guardian as my warband bruisers, big powerhouses who can throw down with most others.  Master Akari and Kitsune are my speedy objective grabbers, darting in to win scenario and gain VPs.  Koji is my scout and with his monkeys can fend off enemies and protect the big guys from being surrounded. Aiko will sit back and use her Ki feats to buff my fighters.

I hope to get them onto the table soon and start working toward some more competitions.


Yes I’m frustrated! Real life is getting in the way of hobby time, as always. The amount of available time for gaming is impacted, of course but there has also been no progression on any gaming fronts but one. No minis painted, no terrain built, no Flashpoint Zoo progress.....nilch, nada, nowt....

So to the one thing I have been working on - Blood, Sweat & Horses. Joe’s been working through the rule book with me and has been raising questions, issues and proposing solutions. Most of which I have been able to incorporate, discuss or smooth over into the game. This has, in my opinion enhanced the game greatly and through his fresh eyes i’ve been able to tackle some of the ‘niggly’ bits of the game. Once again can I express my deep gratitude for this.

Of course it’s not all good news on this front, hence the title of the post. All the good progress I’ve made on the development of the project has now meant that I’m at the point where my talents have come to an end and I’m stuck a little bit with moving the game forward and moving closer to me being able to offer it out as a product.

While the bulk of the rules and mechanics are in a reasonable shape and I can push this with further play testing etc, the look of the printable version of the game is very drab and functional and completely unprofessional. The event and activation cards were created in a plain word document and look unimpressive. This is the frustrating part because I’d love to progress this but I can’t!

I know I need artwork but can’t use other people’s work, I know I need to put that into some kind of template to produce event cards etc... but all of these things need a budget I just don’t have. My budget for this project is £0.00, yup nothing at all. I can’t commission an artist for my vanity project, so I’m stuck - frustrating!

I guess I need to find an artist and a graphic designer that would do me a solid (free!) favour...


Just a brief report from Broadside, the annual wargames show held in Sittingbourne, Kent and hosted by the Milton Hundred club.

This is my closest wargames show of any size and I like to make an annual pilgrimage and have a nose through the Flea market and natter with the likes of Clint, Ray and Lee.  This year I was excited to be going up to help my buddy Darius run his stall promoting Uncon 4.0 (November 10/11), the games convention that we've been trying to develop over the last year or two and this year at Broadside we were going to play some gateway games that would entice wargamers.

About three days before Broadside, Dave - one of the organisers put out a plea for clubs to put out a game as he had a dropout.  Ok, I'm not a games club and I was already helping Darius out but I couldn't resist the chance to test out Blood, Sweat & Horses on a wargames community. So, yes you guessed it! up went my hand......

anyway, cut to the day and I turn up with B,S&H and the board games that Darius had thought might appeal and we set up with plenty of time to spare. We went with a nice lightweight game to start with - Scythe!

After setting up, I managed to get around the event before opening and chat with Clint and the Rejects lads before heading back to my table.  I was glad to, because within minutes of the doors opening I had a group of interested players ready to sit down and try their luck. (pictures posted with permission) 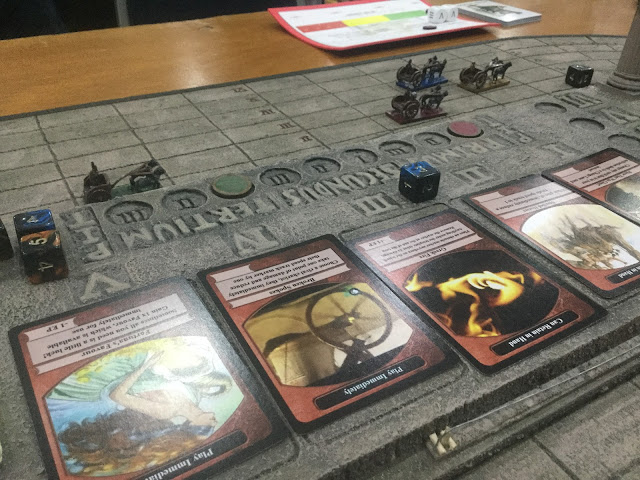 I didn't get much opportunity to get around the show after that as my game had a steady stream of players, wandering over and giving me a thrashing at my own game....

still there were some very lovely looking tables 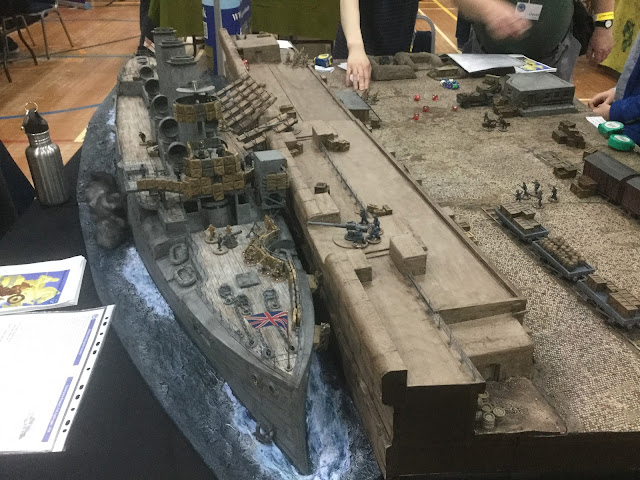 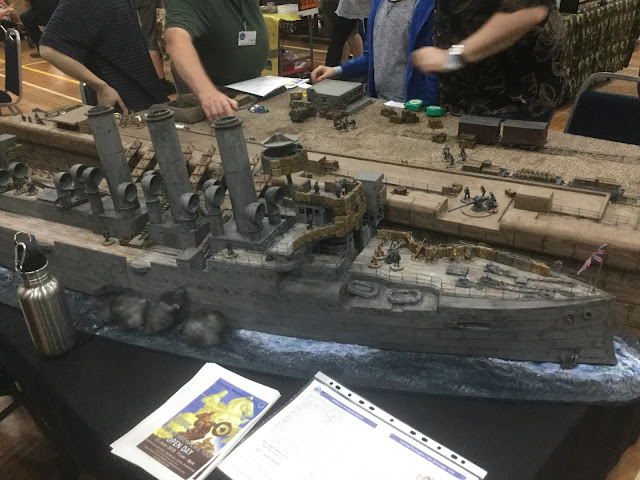 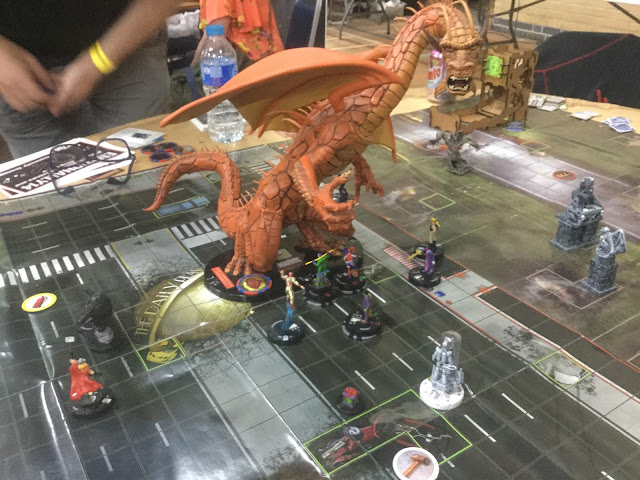 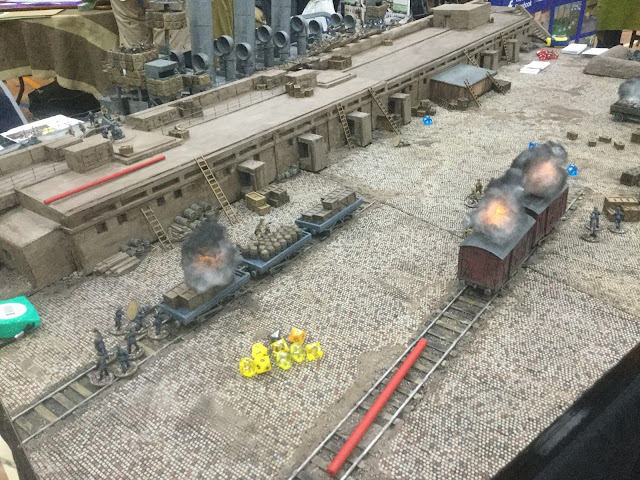 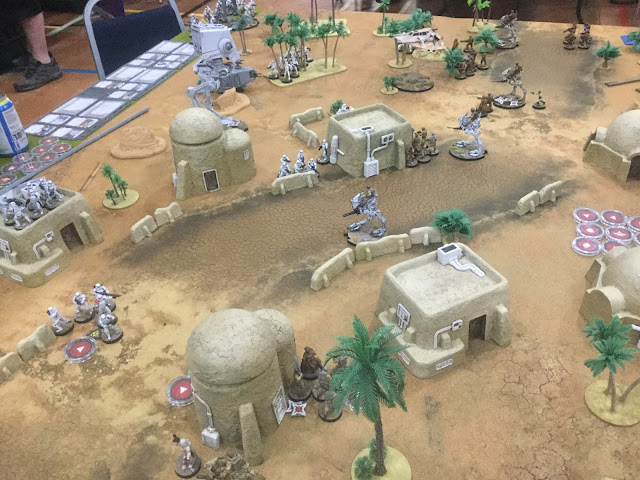 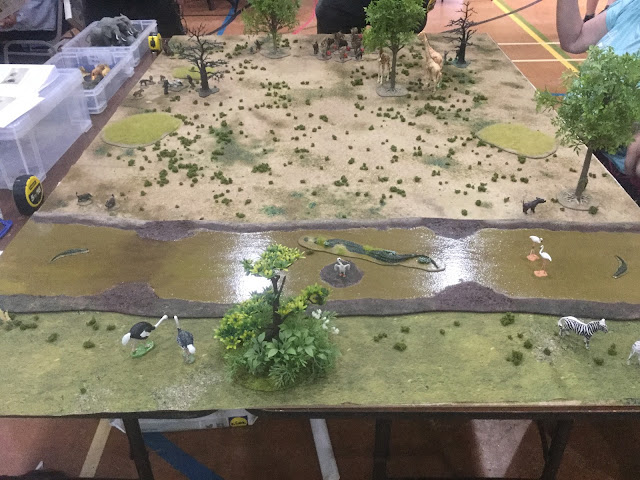 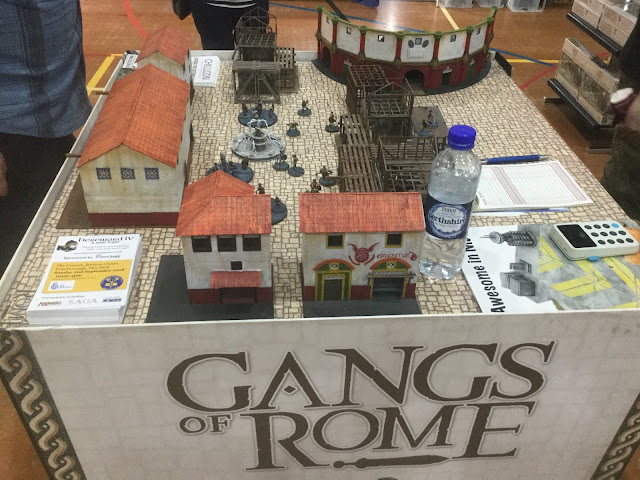 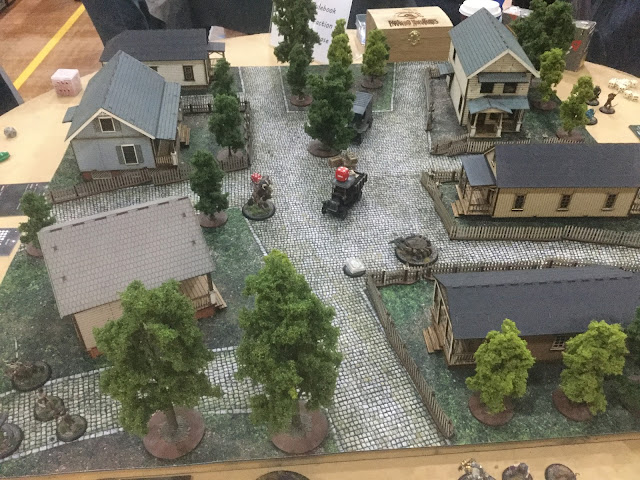 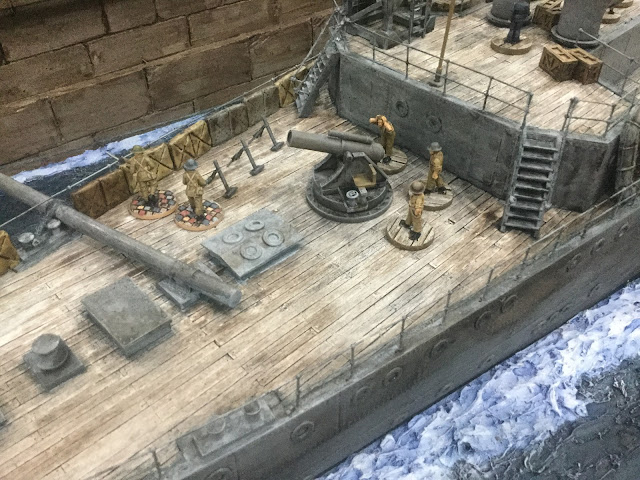 sorry I didn't get the names but I'm sure someone will put a name to each game on their (better written) posts.

My final game was with these two herberts.... 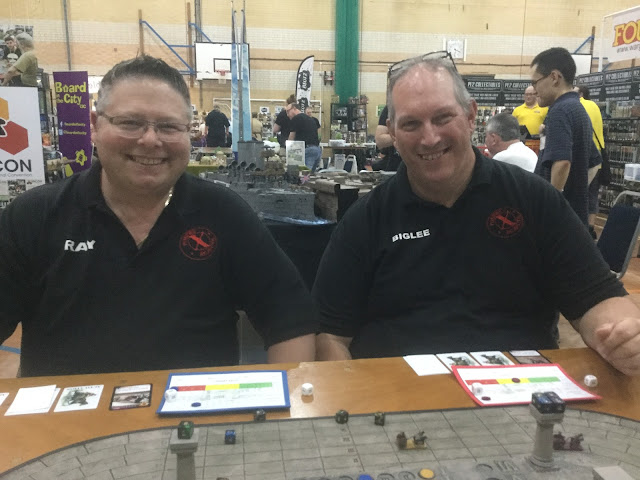 Big Lee with a very convincing win! Ray ended the race in the pits having tanked his chariot in the final corner.....

yeah I'm looking for some volunteers to playtest my game "Blood, Sweat & Horses". I need those of you who have a mixed gaming group with board game and war game enthusiasts alike to give it a go and feedback to me their thoughts/feelings on the game.

Let me firstly reassure you that I have tried to put my ego to one side regarding the game i.e. I'm not going to get angry or frustrated by negative comments - although would like them to be constructive as well.  So if someone doesn't like an aspect or rule of the game or indeed the whole game, I would like to know why and how they would change it. Suggestions for improvements are always welcome and where possible will be incorporated into the design - the whole game has changed in so many ways due to the play testing of my own group! 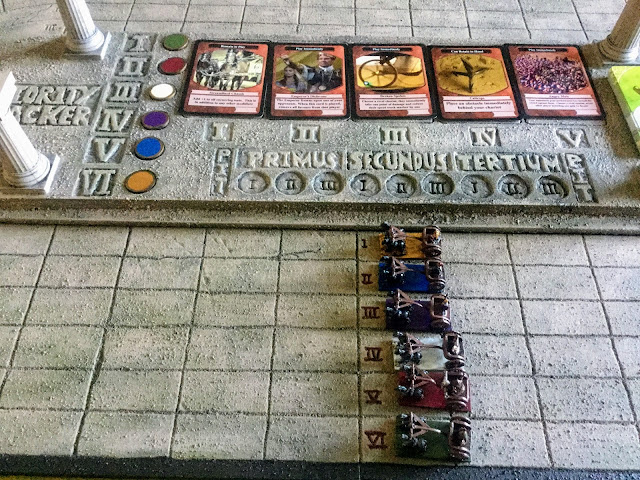 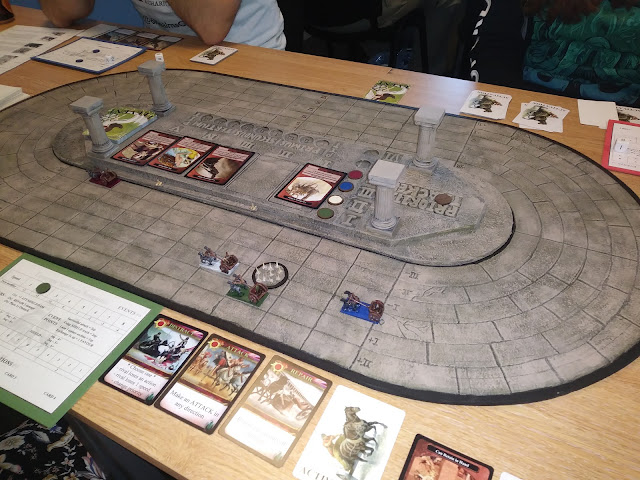 Anyway, for those of you who don't know what I'm talking about, I've been designing and building a Romanesque chariot themed board game for the last few months. See this post for more details here.

Historically accurate it is not, but I hope it captures the theme and your imaginations.  The game play is designed for 3-6 players at 14 years+.  I've tested it down to 4 players but it is more fun at 6! At some point I'll be trying it with just 2.

I've tried to get it to the point where it can just be printed out, including the track and cards.  So don't worry about having to do much more than a bit of arts and crafts. The board can be printed out in A3 or A2. Don't worry about your home printers because the A2 version can be printed out in 6x A4 pieces, I mounted mine onto some blue foam for rigidity but corrugated card would be just as good. The board can be printed greyscale so don't be worried about it being too costly.  Tokens-wise, I use small mdf bases to use on the priority tracker and either cubes or really small mdf bases for speed and damage markers. For chariots I use 10mm scale minis from Irregular Miniatures, but you can use anything you want including the images I've included in the pdf which can be made into cardboard standees. 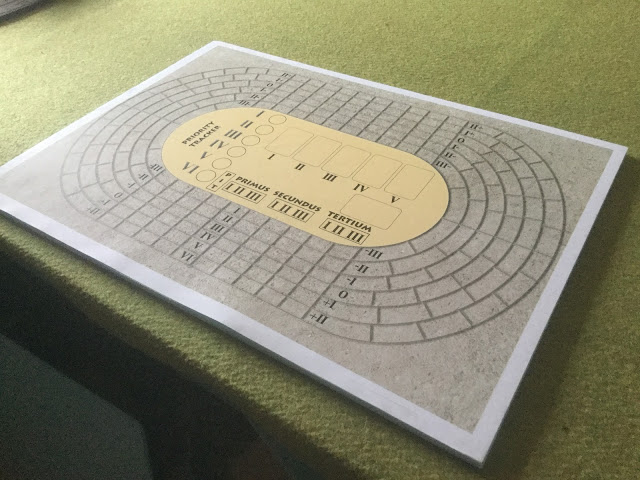 I will be attempting to put together a "How to Play" video to help with rules interpretation, but I'm obviously available for questions at surprising times of the day due to my shift pattern.

So if you are interested please just email at

just remove the spaces and place the correct symbol in the right bits....

I would like all feedback returned as soon as possible as this project is gathering pace, so please get in touch, especially if you are able to get a game in or two within the next month or two.


you know how i'm always moaning on about how busy I am? how I can't respond to my favourite blogs or put out regular posts? (2 posts in 2 days though Andy?)

Weeeeeellll, I may have let myself in for even more..... oops!

So, you know that my board gaming group put on a convention and it went really, really well.  You also know (if you read my blog regularly) that I hosted a big zombie apocalypse game and a dungeon crawl over the two days of the weekend. Well they went down very well indeed and attracted a lot of attention over the course of the convention.

Fast forward to a few weeks ago and I'm rolling dice with a couple of the group when I casually remark that Flash Point: Fire & Rescue (the game we were playing) would look awesome as a 3d game..... stupid, stupid, stupid boy.....

It was agreed, that yes indeed it would look awesome....I'm so stupid.... and that it would be a really cool table at the next Uncon....for goodness sake...

Fast forward to a week ago and I'm ordering blue foam and other essential building items.....d'oh!!

and then today the stuff starts to arrive....bugger

So there we have it! I'm building a 3d board for Flash Point: Fire & Rescue for a future Uncon event.  we have one in November but it's unlikely to be ready for then, so probably April’s event. I've decided to do a video diary of the whole project and the links to the first and second episodes are below.