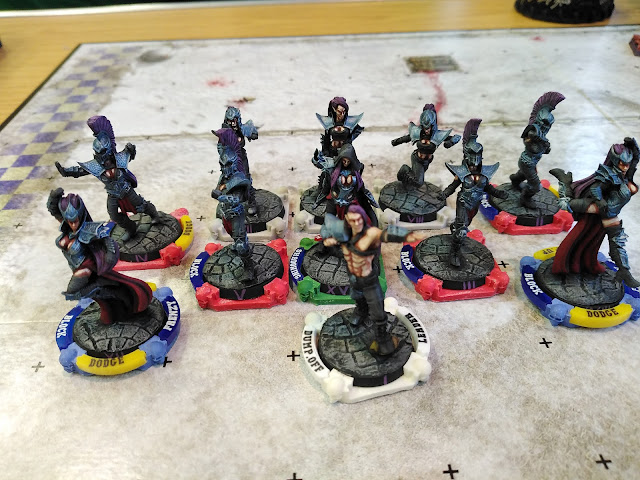 So most of my xmas gifts from missus Gobbo and my wider family were Blood Bowl related (yes I've gone a bit loopy for it...).

In addition to all of the Almanacs, which are a collection of the Spike! journals and provide additional rules and star players for the various BB teams, I also received a complete Halfling team.

May I present to you the Fanitt Fatties. 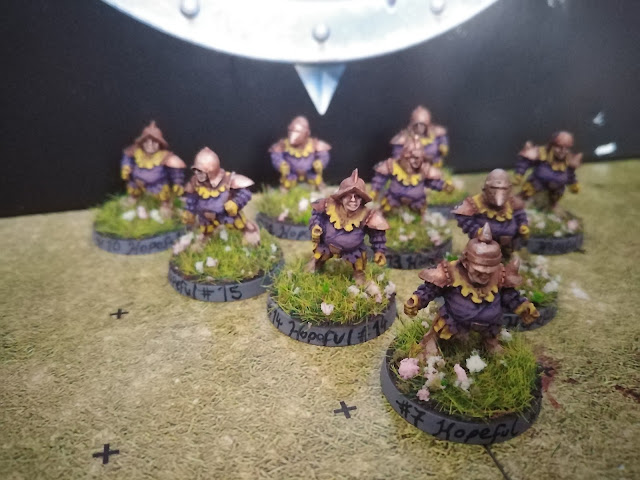 Halfling players are too short to throw or catch, only run at half speed, and let’s admit it, they’ve got little hope of blocking anything! Most Halfling coaches make up for this lack of quality though with sheer quantity. After all, if you can get half a dozen players in the opposing team’s End Zone, and by some miracle end up with the ball, all it takes is one of the little guys to score that all-important goal. 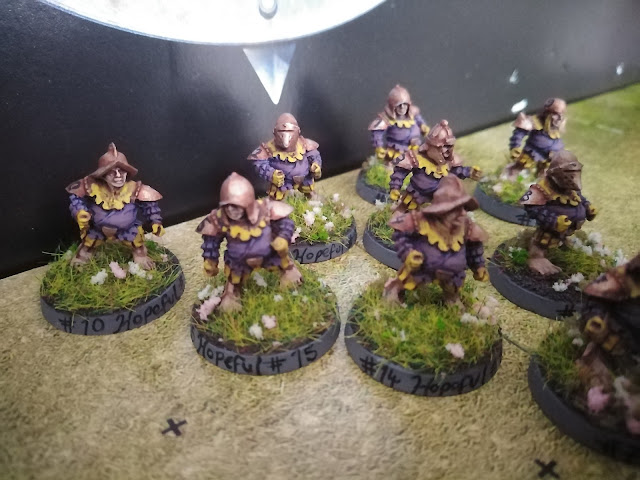 The miniatures are from Black Scorpion, made from resin and were very easy to paint, with lovely character.  Although the BS minis don't differentiate between the new positionals that GW have introduced, I split them into various groups so that I could recruit them into those roles.
Hopefuls are the traditional halfling lineman role. Not quick, not strong and not armoured, they often spend most of their time in the dugouts. 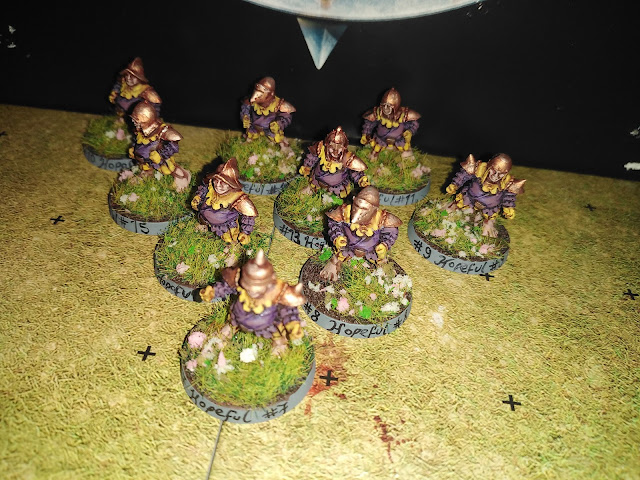 The Treeman is probably the strongest player in the whole of Blood Bowl. He's gifted with an extraordinary natural strength against which very few players can compete. However, the Treeman is extremely slow and has a bad tendency of taking root in the middle of the field. If that happens, he won't be able to move...at all.

I adapted the second Treeman with the simple addition of an eagle from Master Crafted Miniatures, which adds a nice contrast to the first.  that said the "leafy beard and hair" are also quite distinctive. 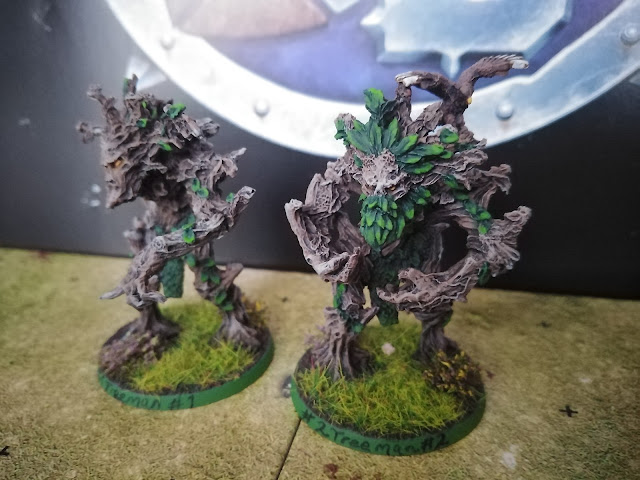 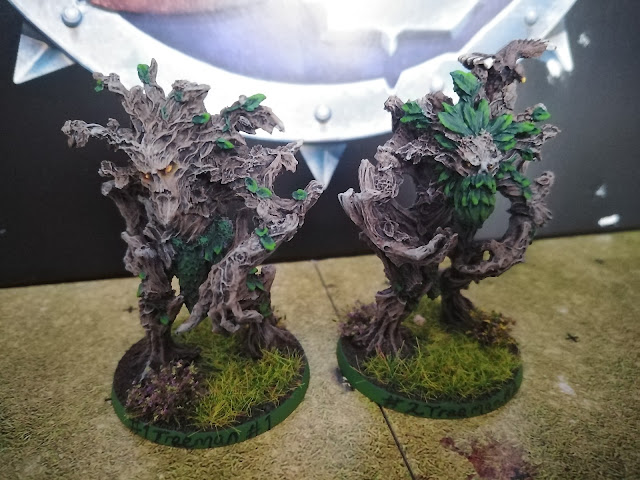 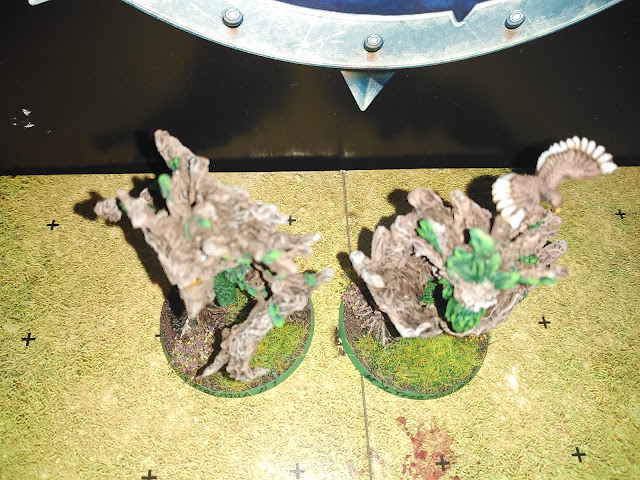 The new positionals are the "Catcher" and the "Hefty".  The catcher is fairly typical, has some nice skills that keep your 'fling from being turned into jelly and hopefully score those TDs!
At first I thought Heftys were going to be the 'fling attempt at a blitzer, so before reading the new rules for them, I chose the armoured minis and painted them up.  Later I found out they are more akin to Thrower roles and can take "passing" skills. So they got white rims on their bases, but I still liked the minis and so they stayed. 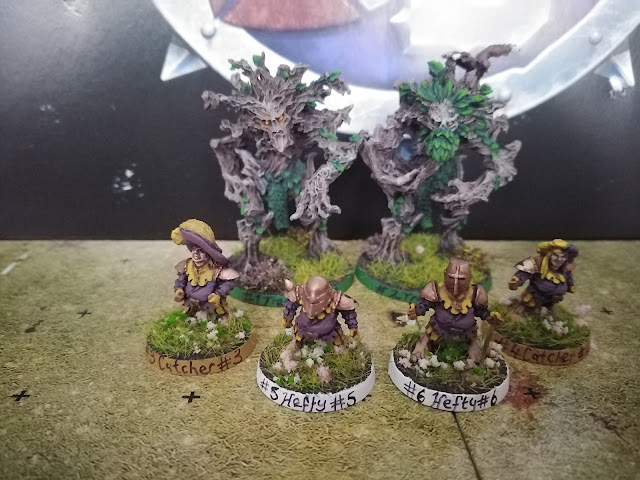 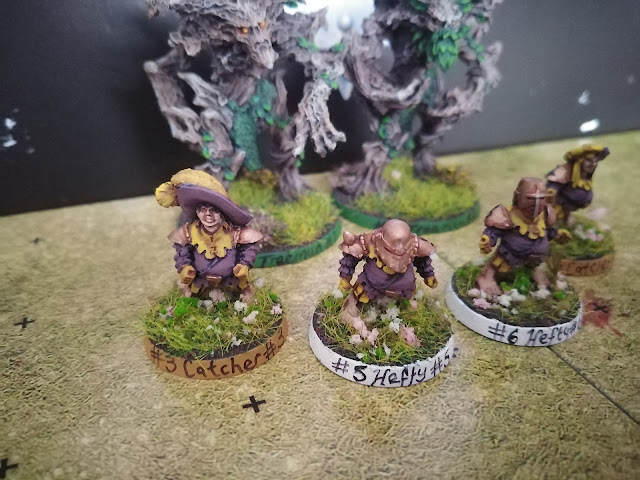 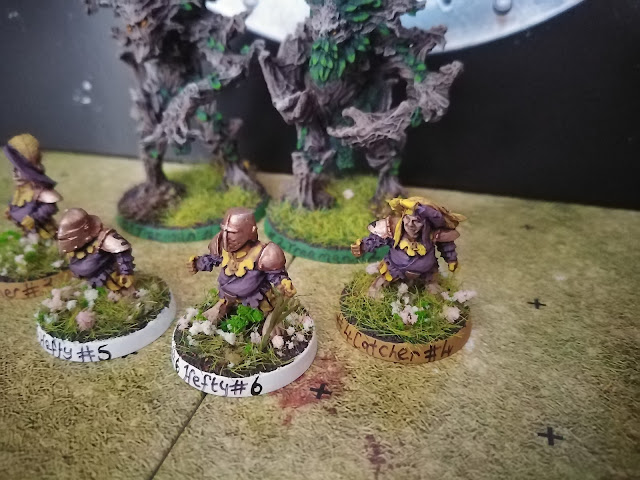 For size comparison to the GW minis, I used an Orc from the base game and I think they scale reasonably well, although I think the BS minis are more true 32mm rather than the GW "heroic" 32mm. Still I don't think they'll look out of place and at £40 for the entire team, they are a lot cheaper than the equivalent GW. 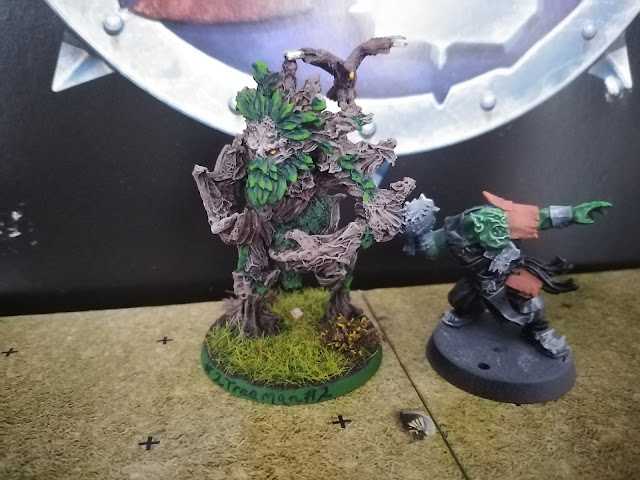 Hi all and Happy New Year to you all.


I hope you guys got the toys you wished for! I was certainly very lucky, with my family being particularly generous and you lucky people will be seeing that largesse, as I post the minis as they get painted.

First up, this week I painted the minis from the board game Western Legends.  Western Legends by Herve Lemaitre and Kolossal Games is a sandbox game set in the Old West full of cowboys, outlaws, native American Indians and a host of historical figures thrown in to boot. You can play as Billy the kid, Calamity Jane or Geronimo picking from a line-up of 12 characters. 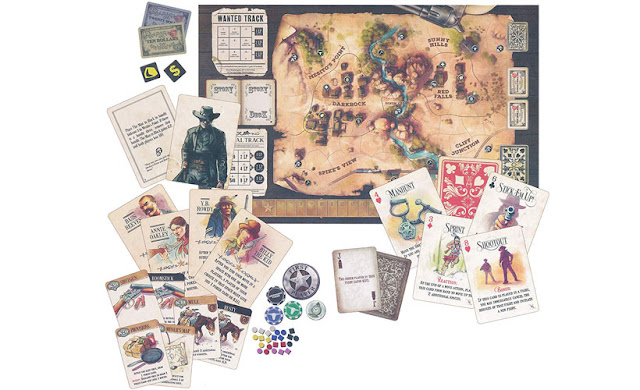 As a sandbox game this is where the fun really begins, on your turn there are just so many options and all of them can support you in working towards becoming the most legendary figure in the Old West. You really can play this as you want to, become the most wanted character or become a marshal chasing down the bad guys arresting them and placing them in jail. Either way you can go into one of the two towns to spend your cash in the general store to buy a mule or a horse to increase your movement or buy and upgrade your weapons which prove your abilities in fights.
The general store also stocks some additional items that you can buy that will provide further bonus actions or abilities. Any upgraded weapons and mounts provide additional legendary points when you get to the end game scoring, so it is well worth spending cash to do this.
In the two towns, Dark Rock and Red Falls, you can play poker; 'Texas hold em' of course, either against any other player who is in the same town or simply against the house. To the winner goes the pot, at least $60, or more if more players ante up the $10. You can also go to the cabaret and pay $30 to catch a show, a drink and gain legendary points. You will also find the sheriff's office and the doctors. Wanted characters will be sent to the Sheriff’s office when arrested by players or the sheriff himself. The Doctor allows you to pay to have all your wounds healed.
Out of town are two goldmines and you can roll the two dice to find gold nuggets, gold dust or gravel. The nuggets can be taken to the bank and exchanged for cash and legendary points. Gold dust provides the gold digger with $10 and there is even a gold dust re-roll face.
You could choose to go to one of the two farms and move the cattle. Here you decide whether to go for valour or infamy. You can choose to wrangle the cattle delivering them to the station to gain the bonus on the reverse of the token and one marshal point, or you can rustle them taking them to the other farm in exchange for one wanted point.
So here are the minis and my paint jobs. 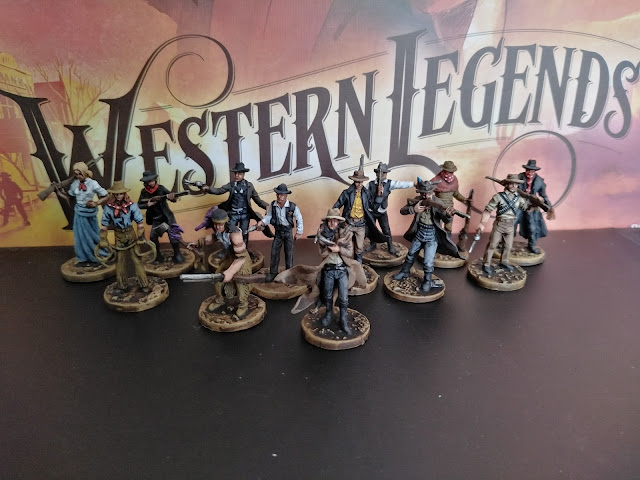 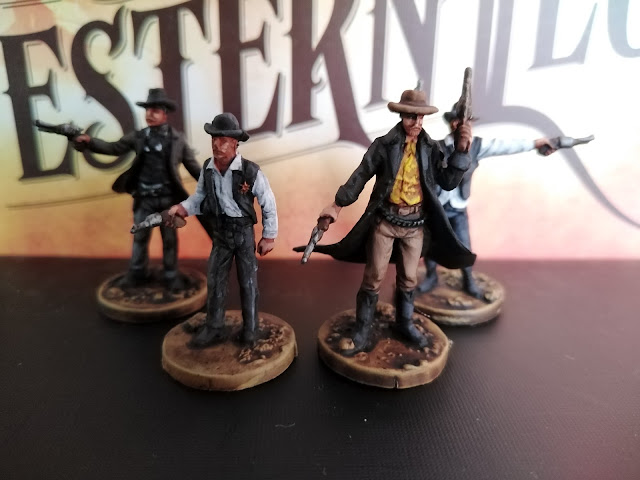 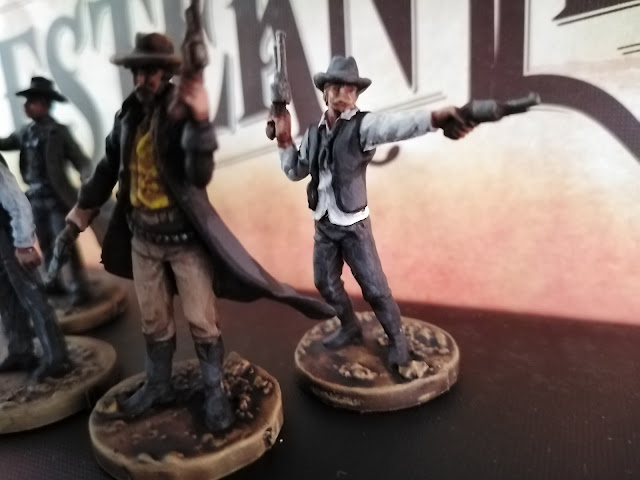 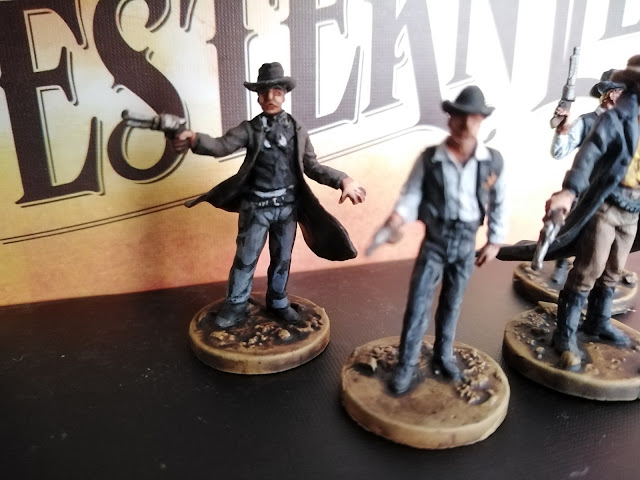 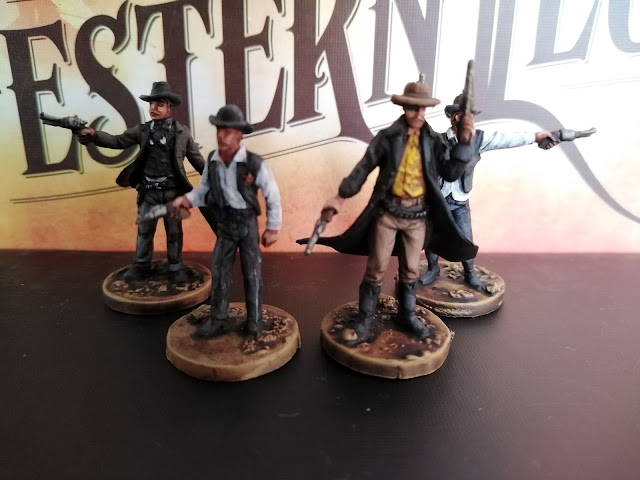 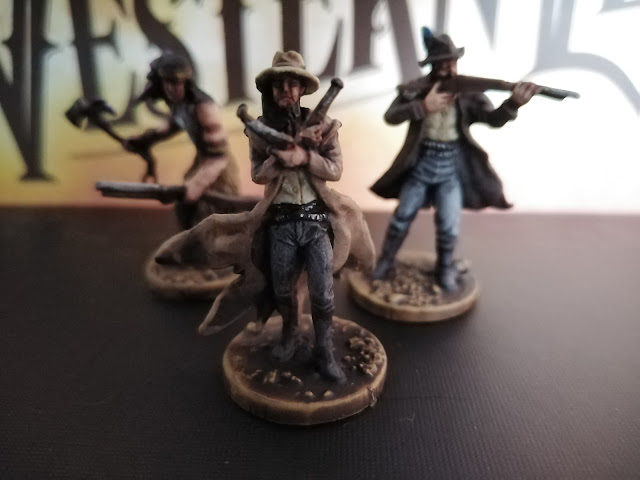 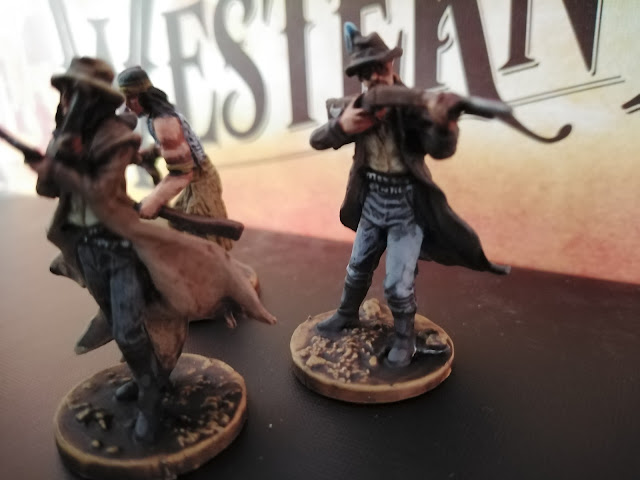 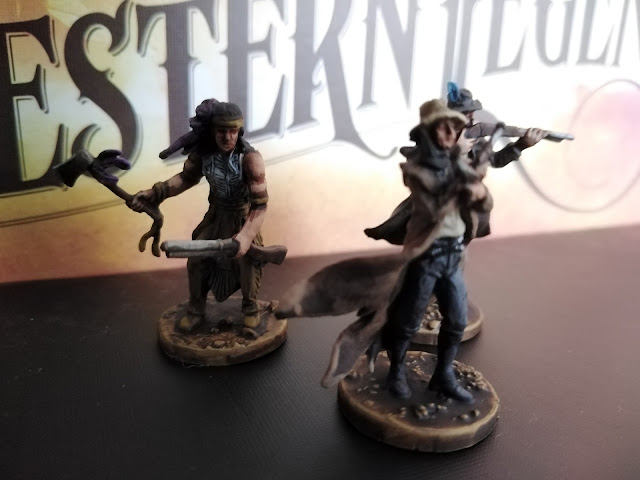 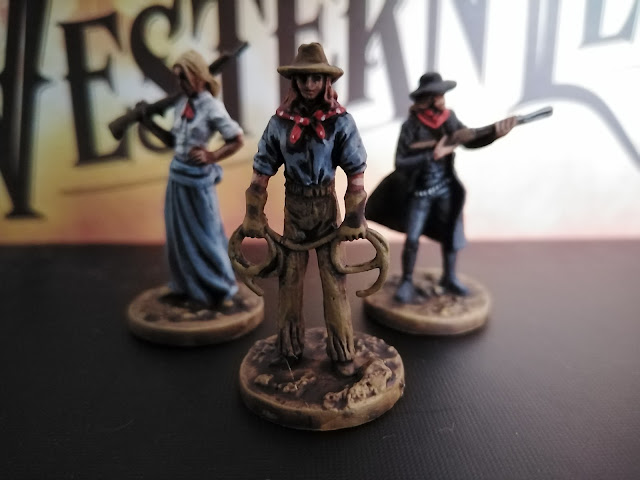 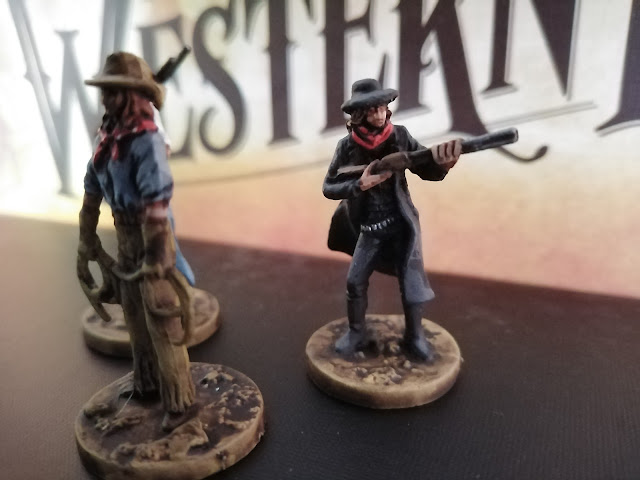 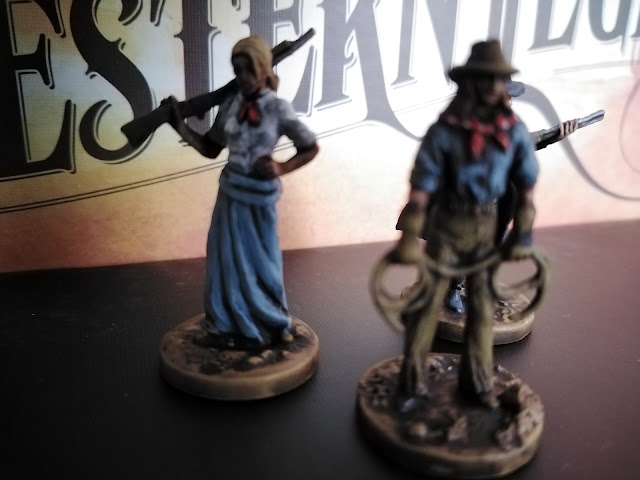 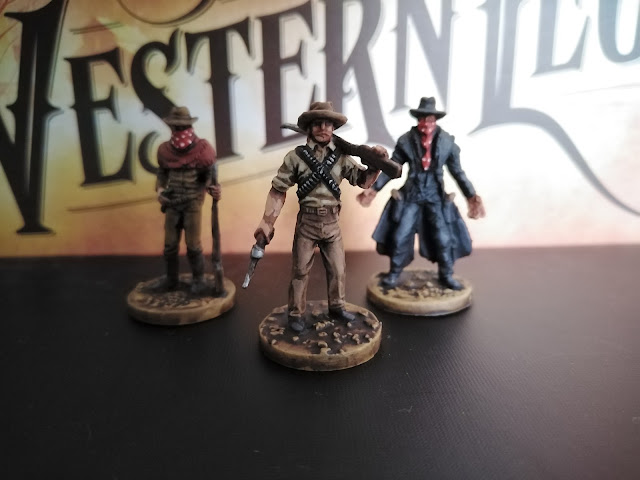 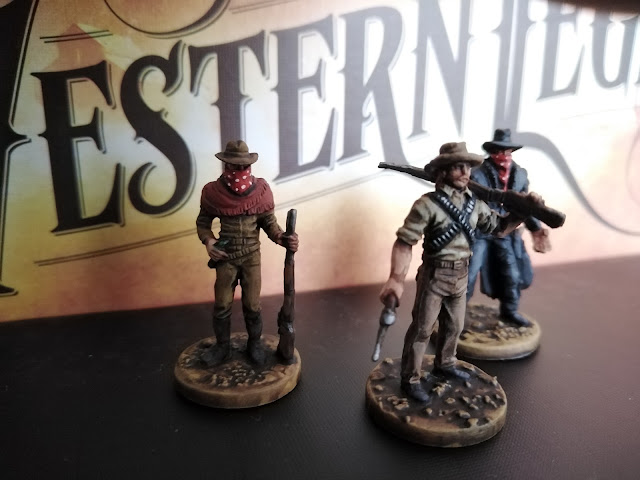 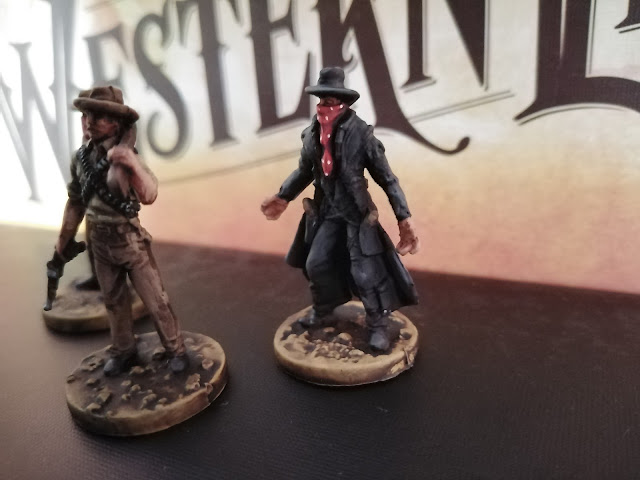 Despite the fact that they are relatively poor sculpts compared to bespoke miniatures, they were quite a lot of fun to paint, so I managed to get through them quite quickly.  They scale to about 25mm so would actually fit most settings and could conceivably be used in TT wargaming, however there are better miniatures out there, so I'm happy to stow these away with the game and use them purely for this.  That said, I'm very tempted to make a larger 3d replica of the board to play at Uncon, when it returns at the end of the year!
hope you enjoy
dGG