Ariniel crept stealthily along the length of the slender branch, high in the boughs of the ancient oak he was nigh on invisible to the creatures that violated the woodland clearing below. “Not that they would notice me if I was on the lowest branches” he snorted to himself, the filthy Orc scum couldn't see beyond the length of their porcine snouts, besides the noise they made was astonishingly loud given that there was only five of the beasts. Oddly the quietest of the whole group was the solitary prisoner, sitting sullenly with her back to the huge oak in which the elf was now hiding. The diminutive gnome had at first been raging as she was dragged into the clearing and despite her small size it had still taken three orcs to subdue her. As soon as she had entered the sacred grove however, she had stopped struggling and become almost compliant, allowing herself to be bound to the trunk of the tree and not even flinching as the spiteful orcs discussed grisly methods of killing their prisoner.

His bare feet made hardly a whisper as he traversed the clearing, 20 feet above the clamouring monsters until he reached the optimal position. Rage boiled within the young elf, his hatred of the foul greenskins was more than just a reaction to the desecration of the goddesses sacred places, no this was a visceral hate deep within his core. He could still picture his mother’s face as she buried him under thick undergrowth, tears filling her huge blue eyes begging him to be still, be quiet as the rampaging Orcs tore through the handful of elvish villagers. He had watched from his hiding place as she drew a small belt knife and turned as a pair of brutish warriors charged at her, slicing the first from ear to ear before his partner drove a filthy, ragged blade through her ethereal form.

Taking a deep cleansing breath, then another Ariniel fought to sublimate the roiling emotion within his soul as he sought the serenity which would aid him in the fight to come. Drawing on the power of Mielikki ‘s sanctuary, he gradually found the sense of calm he'd been looking for and slowly smoothed his furrowed brow, a slight crooked smile formed and the storm had passed.  With one last deep breath, pushed all the way out he was ready. With an almost playful flick of the wrist, he cast his long bladed spear at his chosen target. Aided by gravity, the weapon sped across the twenty feet like a lightning bolt before boring through the back of the Orc that had been looming threateningly over the gnome and bursting through its chest in a shower of gore.  As the spear left his hand, Ariniel dropped casually from the overhanging branches, landing lightly in the middle of the four remaining monsters. Despite the height of the fall, the elf did not break stride as he immediately launched a pair of throwing stars at the biggest Orc.  The razor sharp discs, stamped with the symbol of his goddess and blessed by Andraste, the ancient head of his order thudded into the face of the ugly beast, tearing into the right orbit and cheek and destroying the eye. With a squeal the creature fell to the floor, clawing at it’s face trying to dislodge the missiles, before crawling out of the clearing on hands and knees.

The remaining three orcs had barely time to react to the sudden loss of their companion and the felling of their leader before the elf was on the move. With the speed of a striking serpent, Ariniel launched into a series of kicks that pushed the flustered creatures backwards, causing one to fall to its knees and the others to reel away. Drawing his simple belt knife - his mother’s simple belt knife, the blade - good elvish steel, worn but still keen despite the near century of use flashing in the filtered sunlight pouring through the canopy, Ariniel rolled across the back of the kneeling orc trailing the razor sharp blade almost lazily behind him and across the creature's hamstrings.  With a roar of pain the beast collapsed to the floor, unable to regain it's feet.  Nimbly the elf  darted between his final standing opponents, an open palm strike stunning one and a sweeping kick flooring the other.  Past the greenskins, Ariniel reached the corpse of his first victim ripping his polearm from the body of the foul creature and causing the awestruck gnome that had been pinned under the body (and had been using the blade of the spear to cut her bonds) to wriggle free.

Now rearmed with his favoured weapon, he began the deadly dance of death in earnest.   With an exquisite grace the wood elf ghosted around the bewildered pair of greenskins, who desperately tried to block and parry the thrusts of the long bladed spearhead to little effect. The tempo of the dance grew faster and faster as Ariniel weaved an increasingly complex pattern of strikes that the brutal beasts had no chance of stopping.  First one then the other took fatal thrusts to the heart as the monk penetrated their defenses with a practised ease.  Finally all that was left was the hamstrung orc still howling its pain to an uncaring world,  Ariniel strolled casually over to the beast and with only a hint of the anger that lived below the surface, thrust his spear through the beady bloodshot eye of the filthy creature, ending it's howls in an instant.

Looking around for the fallen leader of the foul band of orcs, his eyes grew narrow as he spotted it's trail.  Hefting his spear he was about to follow the path of broken foliage when the pitiful cries of the gnome bought him to his senses.  Trotting over to the gore covered female, he vowed to catch the escaping beast, he did not want to let even one get away....


When I decided to ask my daughter to run a summer campaign for D&D, I started to think about what type of character I would run.  Loads of things crossed my mind - did I want a burly Dragonborn fighter? or maybe a Tiefling sorcerer? my favourites are normally Halfling rogues, but I fancied something different.

As most of you know I love me some Bushido, I love the game, the miniatures but mostly I love the background to the game - the Jwar Islands are a fusion of Eastern cultures that just sets my imagination racing and my absolute favourite faction is the Temple of Ro-Kan.  The Temple is a band of warrior monks and Yokai dedicated to maintaining "the Balance" in the Isles, i love the idea of these Shaolin type monks and their "airbender" type control of the elements.  What has this got to do with D&D? I hear you ask, well one of the class types is monk - SOLD!! At first I wanted a Halfling monk, but finding a miniature was nigh on impossible, I was even tempted to pay a lot of money and get a figure purpose built but it was too prohibitive in the end.

So I went to Salute! and scoured the stalls for a suitable miniature, I didn't find a Halfling but I did find this chap....

Sculpted by Kev at Hasslefree Miniatures, he is absolutely perfect for what I want - no armour, simple weapons and a kind of simple look.  Just what was needed for that monk like feel.  I bought the metal version for just under a fiver. So here is the background I devised for him...

Ariniel Galenodel is a young elf, barely a century old or at least he thinks so. He was found as a young child wandering in the  burnt out remains of his dwelling after his small wood elf village was destroyed by Orcs, by a passing band of elvish monks.  The devout followers of Mielikki took in the raggedy orphan and raised him in the ways of their “Temple” – a vague term only as the temple usually consisted of any woodland clearing deep in the heart of the forests, places sacred to the goddess.

A keen student, Ariniel drank in the lessons taught to him by the monks particularly the spectacular martial arts sessions. The brothers (and sisters) of the glade were especially skilled in the way of the open hand and were considered the defenders of the goddess, blessed with preternatural speed, senses and balance. With a will, the boy took to the path of the monk and mastered simple weapons, particularly the spear which became an extension of his own body. Athletic and acrobatic, the boy was grace incarnate as he “danced” to the blade song, determined to excel and always pushing himself further and further, this has only become even more ingrained as he has become an adult.

He has struggled often with the deaths of his parents and the destruction of his village and harbours a hatred for greenskins of all kinds, but particularly Orcs. Despite this he fights with a serenity that belies the underlying darkness that plagues him, a serenity that allows a clear sense of the battle around and gauge the flow of the fight. This clarity of thought has seen him through many hard fought conflicts with those who would ravage the forests of Mielikki and pollute the natural world.

In contrast to his serious nature on the battlefield, off it he is quick to laugh, sings often and is fiercely loyal to his order and in particular Andraste, the ancient monk who first found him.  Andraste has now set Ariniel on a new path, one that has led him away from the secluded clearings of the temple, one that has driven him out into “civilisation” and amongst the other races of Faerun, one that will lead to many adventures and new challenges and one that Ariniel hopes will allow him to slaughter Orcs…

Paint wise I stuck with neutral, earthy colours to reflect the wood elf and monkish look.


I was going to add one of Ben Calvert-Lee's eagles onto the end of the haft of his polearm but it might be just a touch too big and in consultation with the Nerd Herd I left it off. 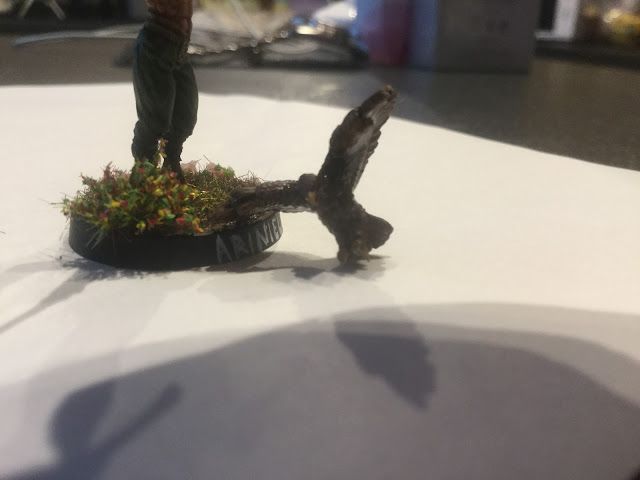 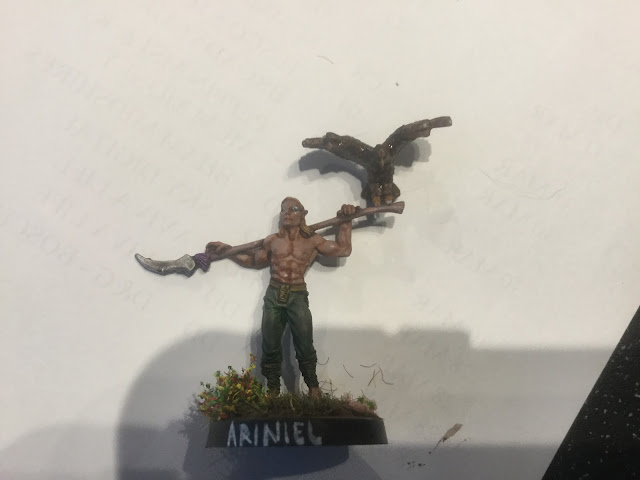 So there we have Ariniel... 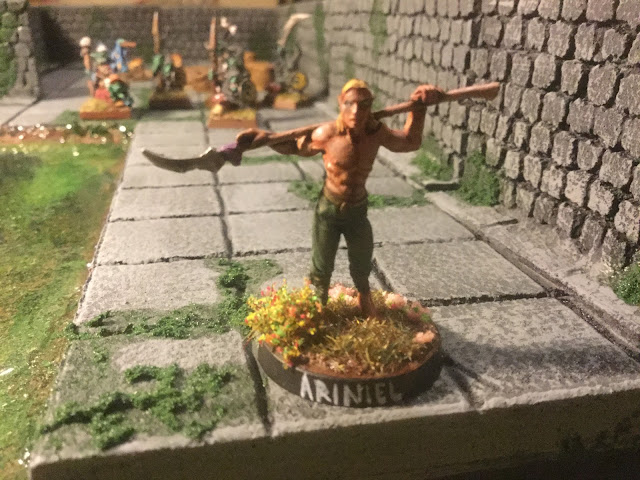 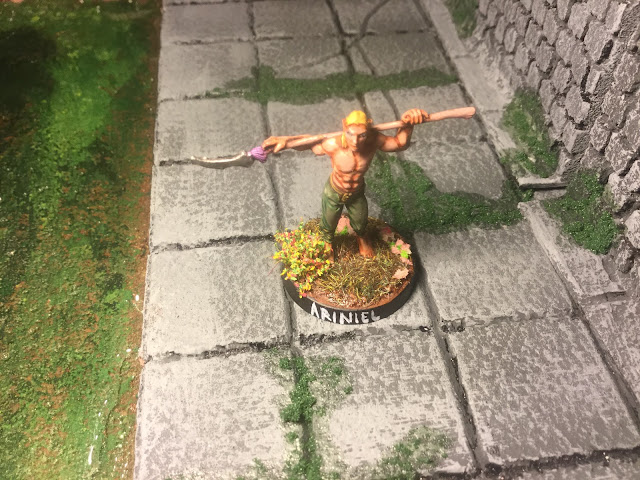