Debbie 'don't call me Debs' Wills gulped visibly as the four large gangers surrounded her, holding their various weapons loosely in their massive hands.  Ling Mei and JJ were too far away so were of no help to her at the moment.  The weight of her huge sigsauers on her hips, normally a comfort seemed to mock her with their unavailability.

The leader of the gang, with his towering blue mo-hawk and 'roid loaded frame smirked at Debbie and spat on the ground.  "Ok missy, hand over those guns and any valuables you may have about that pretty little person of yours or me and the boys will have a little fun!"

Debbie, eyes darting left and right looked for a way out of the tight spot she found herself in.  The irony of being in the middle of the zombie apocalypse and dying in a straight up daylight street rip pissed her off mightily.  Seeing no escape she sighed deeply, so be it she thought to herself, her sweaty hands inching toward the butts of her 'saurs.

"She's drawing!" screeched the ganger bearing a large shotgun in his hands with a massive fireaxe strapped to his back.  The pump action swung up and a gout of flame leapt from the barrel, a cloud of pellets spraying out and slamming into Debbie's chest, lifting her up and away from the big man.  The other three gang members opened up with their guns wildly, hitting nothing but adding to the cacophony.  With a thump Debbie hit the ground, driving the remaining air from her lungs and leaving her groaning on the floor.

Ling Mei, seeing her friend thrown to the floor, let out a primal scream and shot from distance with her bow.  The arrow, rushed and wild, went high and she shouldered her bow in frustration putting her head down and sprinting toward the gangers.  JJ, her face red with anger, fresh tears pouring down her cheeks lifted her shotgun to her shoulder and pulled the double triggers.  Her first shot dropped the youngest of the gang to the floor, the pellets tearing lumps of flesh from his upper legs.  The second caught the leader of the group through the throat, the buckshot pulverising the trachea of the big man and nearly severing his neck with the force of the blast.  With a grunt of satisfaction she slammed fresh shells into the smoking  weapon. A green haired gangbanger toting a hunting rifle, took a look at the savage intensity on JJ's face and with a grim Ling Mei bearing down on them, decided he had had enough and without a second glance took to his heels, running flat out away from the carnage and leaving his mate to face the woman's fury.  With a shaky hand the last punk tried to lift his huge magnum but had barely raised it passed his waist when a freshly reloaded JJ emptied her gun at the hapless ganger nearly ripping him in two.  Ling Mei reached the screaming ganger on the floor, who had had his legs blown away by JJ's opening volley.  With a casual thrust she drove her blade through the temple of the boy to silence him. 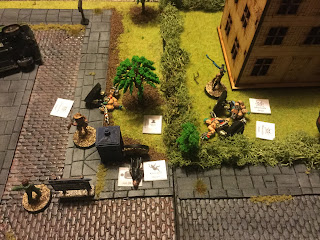 All the noise of this combat had not gone un-noticed by the undead and several came over to investigate.  Four zeds charged Ling Mei and JJ and they soon became embroiled in melee with the foul creatues.  Ling Mei slammed her lead blade through the open maw of the first zed and used her left hand sword to keep the other at bay, while JJ smashed the other two into little pieces in a whirlwind of fury.  Ling Mei stood over her friend's prone form spinning her twin swords in a defensive weave keeping the dead-head away and finally with a lightning stroke took the head from its shoulders in a spray of black blood.

Just as soon as it started so the combat came to an end as the last zombie fell to the floor in two separate places.  Ling Mei knelt down to her friend, a quick pulse check confirmed she was still alive. It was then she noticed that Debbie was wearing the flak jacket she had taken from the national guardsmen only the week before, breathing a sigh of relief and slumping to the floor.

JJ came over to the two friends lying on the ground; "come on Ling Mei, lets go get this weather chick!  Debbie can stay here and can keep our 6 covered..."

"go on" breathed Debbie, clearly in discomfort, but also clearly determined for the group to complete it's mission.  "go get her."

Shooting a fretful glance back at her friend, Ling Mei nodded to JJ and without hesitation headed into the looming darkness of the tunnel.
Posted by Da Gobbo at 07:17