As another Zombtober comes to a close I have the last of my Wargames Factory zeds and a few survivors from the Male WGF box that I've had time to finish in a rather busy month for me outside of hobby work, so I do apologise for the lack of quality Zombtober entries.  Next year I should be qualified so I'll hopefully be able to do something a bit better.  Anyway we have the last 5 zeds to be finished in time.... 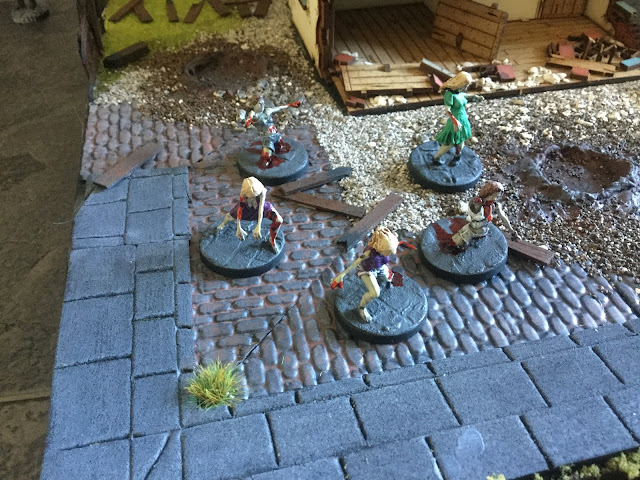 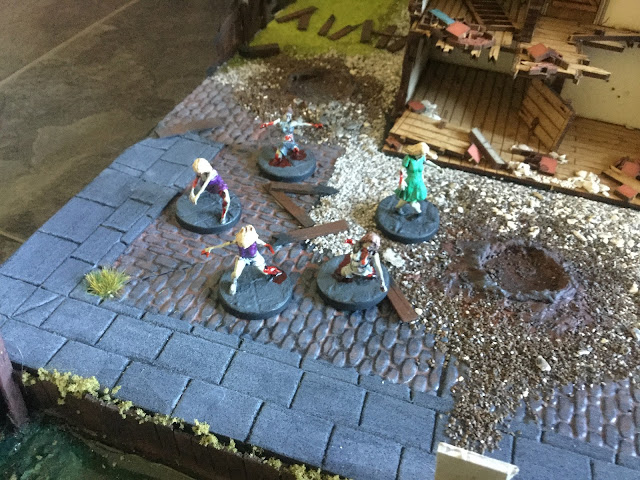 I also managed to put together three survivors to fit in with my ATZ - an English Adventure campaign. These are the last of the WGF male box set, although I still have quite a few female survivors to put together at some point. As they were the last three I wanted them to be a little special but they still needed to fit in with the English theme so there were no firearms on display!

First is "Charlie" an escaped prisoner from HMP Elmley, one of the three detention centres on the Isle of Sheppey.  Following the explosion of the SS Montgomery and the subsequent tidal surges, Sheppey was completely flooded, thousands were evacuated from the main towns and villages off of the Island and relocated to nearby evac centres on the mainland.  Not so the prisoners of the "Cluster" - HMPs Elmley (used for category B/C prisoners), Swaleside (B) and Standford Hill (D), located near the town of Eastchurch.  The prisoners were left to their own devices and hundreds were trapped in their cells, left to drown.  Charlie was a Cat A prisoner, inside for various gang related offences including assault and firearm offences (murder had never been proven), he had been transferred to Elmley temporarily so he could appear before a local Crown Court on Manslaughter charges when the tidal wave hit.  Out in the open between the transport truck and the cell-block he was quite literally swept over the wall and out into the open land surrounding the prison.  Charlie spent an exhausting night clinging to the heaving deck of a small fishing boat that had broken free along the coast and ended washing up on Margate Beach.  Still clothed in his prison blues, he was set upon by the local "infected" population and fell back on the particular skill set of his past, grabbing a nearby tire iron and constructing 'molotov cocktails' he destroyed a dozen zeds before disappearing into the Old Town. 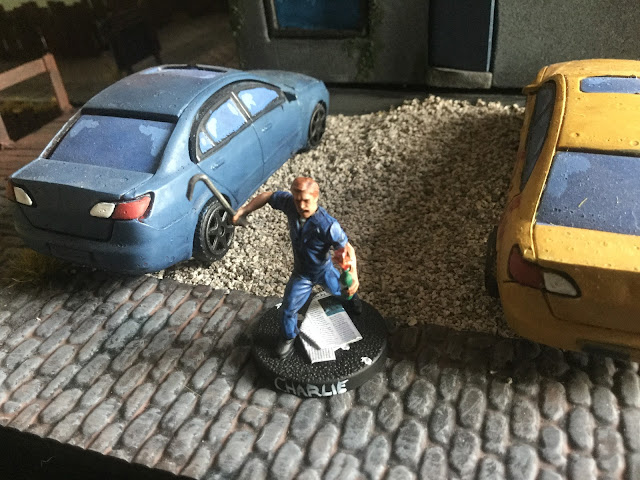 Unlike their US counterparts, British prisoners are more likely to be clad in blue, hence the colour scheme. 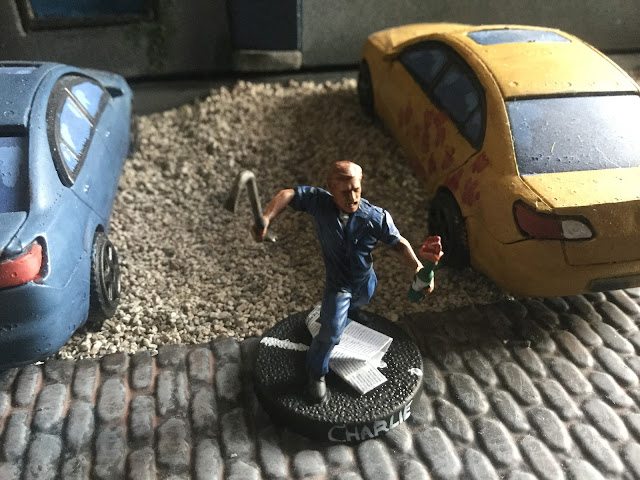 Next is "Steve".  Steve is a local archery enthusiast! Captain of the Thanet Archery Club and 3 times County Champion he has mastered his craft with the compound bow, is currently practicing with the long bow and actively scorns those in the club who use the lowly crossbow.  Following the passage of Daenerys and the subsequent "Troubles" Steve made sure that his compound bow was never far away and a plentiful supply of arrows to hand. 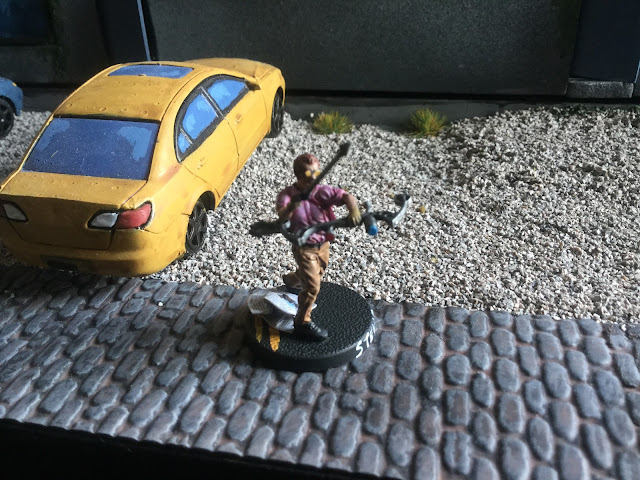 Steve is sporting the club uniform of salmon shirt with red power tie and chinos.  Making sure he has safety glasses on at all times.  Steve was heavily converted as i needed to equip him with a bow which is from the female boxset.  Essentially I chopped off the hands of the cricket bat wielding model and the hands off of the female bow carrier and attached them with a bit of plastic glue, as this left a bit of  a seam I painted Steve's hands as "shooting" gloves which worked really well.  The torso's positioning actually lent itself really well to the dynamic posing of the archer as it looks like he is placing an arrow on the string. 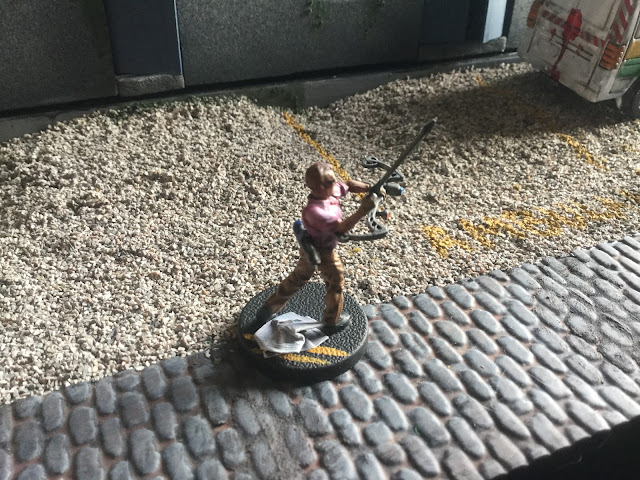 Lastly we have Andy "Gobbo" Wosa, star of the show.  Gobbo's background is covered in my earlier posts so I won't repeat them here. 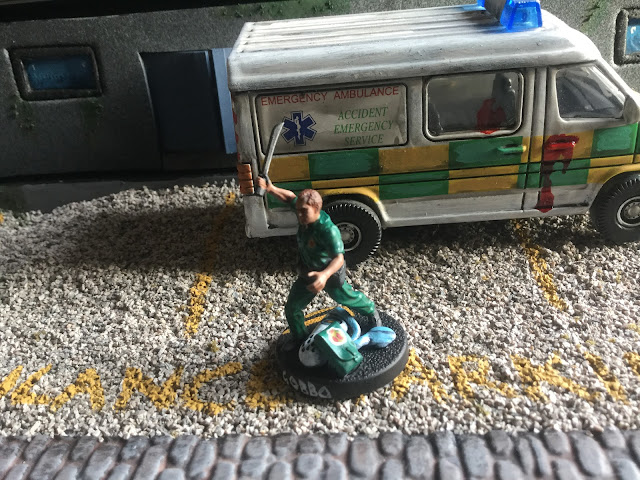 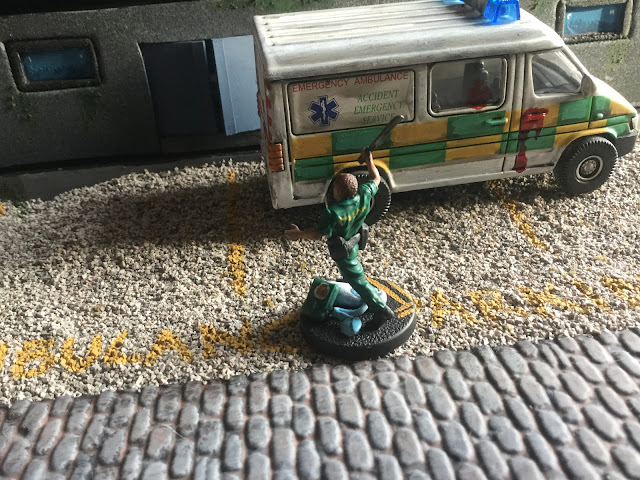 Although I love my current paramedics minis I felt that the male one lacked the gravitas of the lead in this adventure.  So the very last of my box-set was converted over.  A fairly easy conversion I simply made a belt and pouches out of miliput and an Oxygen cylinder that originally he was going to be swinging but ended up on the floor in a kit dump with his response bag.  He is actually holding a large butchers knife as a nod to a former career (I used to be a butcher many moons ago!). 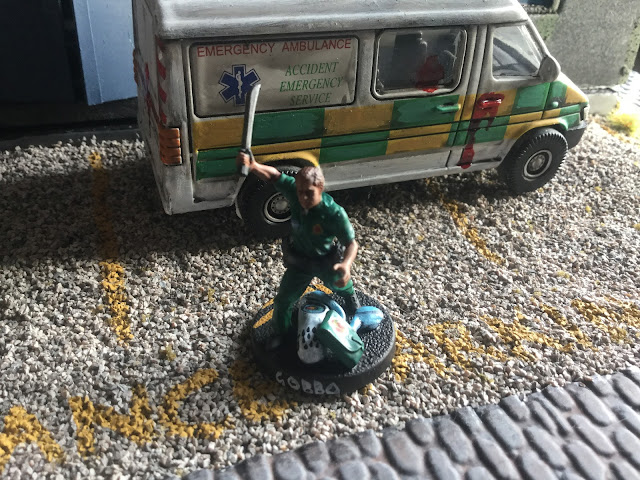 And here is a couple of WIP and a group shot of the survivors. 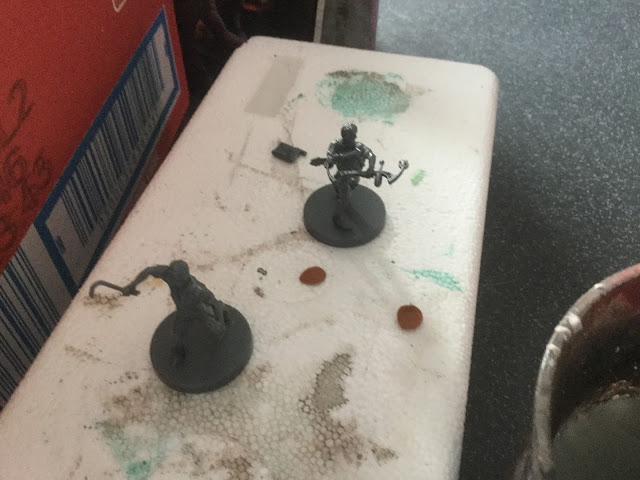 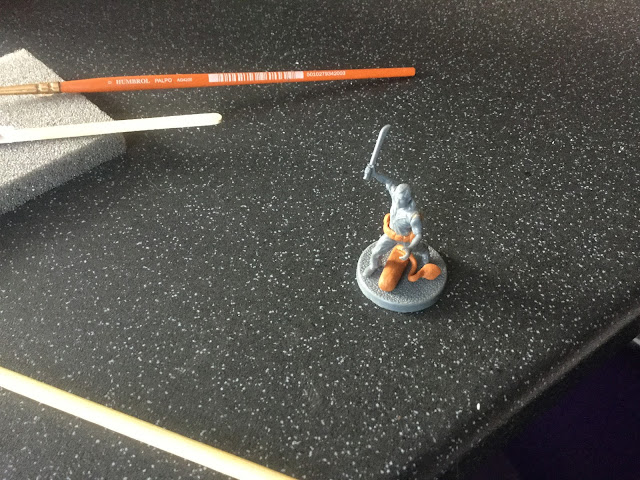 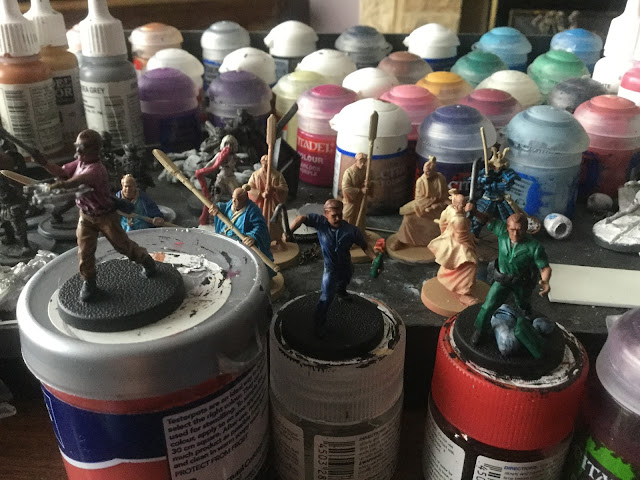 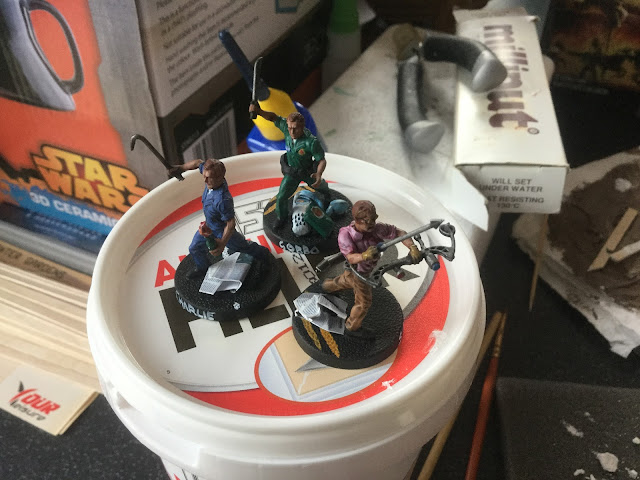 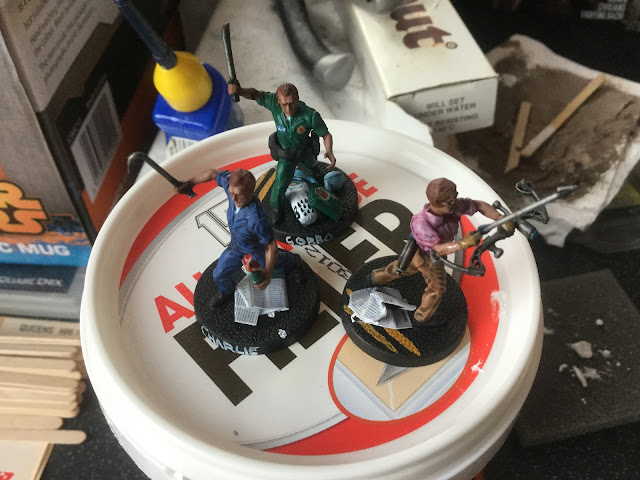 As you can see I've added some newspapers to the bases of Steve and Charlie, these were a very kind gift from Bryan "Vampifan" Scott and have really enhanced what were very boring bases.

and finally to draw Zombtober to a fitting close, a group shot of all the Zombtober entries just to see what I've managed to achieve - 21 (although one has mysteriously vanished) minis in 5 weeks (not including my Bushido minis). Not too bad considering!

Email ThisBlogThis!Share to TwitterShare to FacebookShare to Pinterest
Labels: Zombtober