The Cult of Yurei - a new faction!


yes you heard me, yet another new faction for the awesome game of Bushido.  Now normally I have a policy of posting on this blog in a strict order, so that the posts come out in the order they are written which can sometimes be inconvenient, but in Zombtober all bets are off !

I normally finish introducing the current faction I'm working on with just occasional updates when i get figures for my existing warbands and yes I am in the middle of reviewing the plastic Pirates of Jung that I "liberated" from Damon's Kage board game, there are still more minis to come! BUT i just finished the starter set for the Cult of Yurei, a faction i've been angling for for some time. I managed to find a really cheap set that I saw on the Bushido Trading FB page and I purchased it for half price with some dice and bits thrown in - bargain!! of course there was a downside as the profile cards were for the older version of the game and are not compatible with the latest version, something the vendor didn't mention - grrr!

Not to be deterred, I downloaded the cards from the GCT website (which they encourage) and placed all of the cards on a really easy document that when laminated will have the cards on the front which you can mark off wounds with a dry marker and all of the traits listed with their rules on the back for easy reference - win!

anyway, the reason this particular faction gets an early review is because it fits so neatly into Zombtober you see the Cult of Yurei is a faction based on the undead spirits of the Jwar Isles.....

In the shadows and dark corners of the world, the worshippers of Yurei are gathering force. The many members of this Cult may not even be aware that they are serving the same dark masters, but serve them they do – the Yurei Bargain, which in its various forms allows control over life and death, has proven a temptation to many different people who would otherwise have nothing in common. In the Cult of Yurei, you may think yourself the master of your own Fate but you are always advancing the unfathomable goals of dark unseen masters. Even a puppet master has someone pulling his strings.. 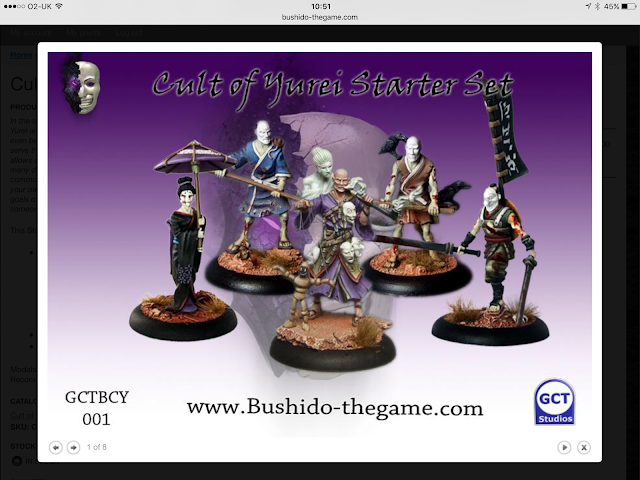 We start with Kato the Puppet Master.  There is no official blurb for Kato or the rest of the starter set but in the rule book (which I don't have because I downloaded the rules for free!) is a lot of stories that follow Kato's decline into madness and the bargain he has struck with the Yurei.  There is an excellent podcast that a fan has produced that is well worth listening to, you can find it here. Kato is called the "Puppet Mater" because he can produce a dangerous marionette that can attack and attaches itself to a character and allow Kato to control their actions!!

Scary stuff indeed, Kato also carries a lot of masks and use these to capture the souls of his opponents in melee and turn them into the walking dead or "Kairai".

I decided that my faction colours would be purple and green, so Kato got his kimono in GW Genestealer Purple and edged with Sybarite Green.   Although the Cult aren't a military unit therefore they will not be all in uniform colours the members of this warband will have that combo featured on them in someway to unify the faction.  The spirit creature wrapped around Kato and conjured from the opium pipe he is smoking is washed heavily in Nihilakh Oxide.  In all of my other factions I have crafted bases to add a little flavour of the faction to the warband (Temple of Ro-Kan get ruined temple and natural bases, Prefecture get the polished wooden floors of the great houses, Jung get nautical bases) for Yurei I decided to go for a very barren look as if the land was scorched by their very touch.  Therefore I did plain earth with no vegetation and used black ink to create scorch marks around the feet of the minis (this is a bit more evident in other pics).

Next we have Ikiryo, the undead geisha.  I love this mini and she is very powerful in the game providing some much need ranged attacks and mystical power.  I also loved painting her and I really went to town painting a small pattern on the sleeves of her kimono and cherry blossoms on her parasol. 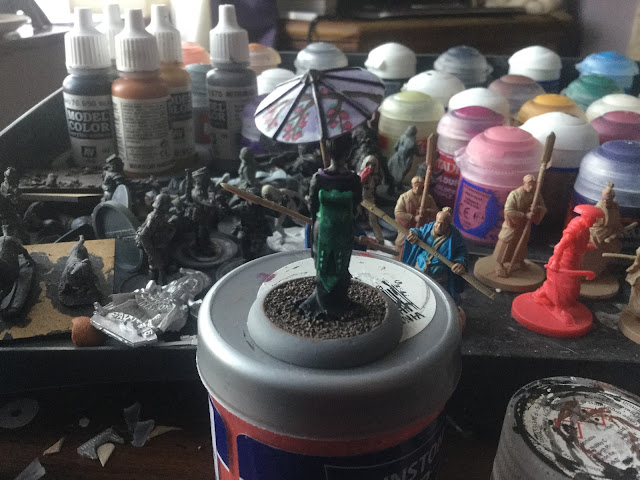 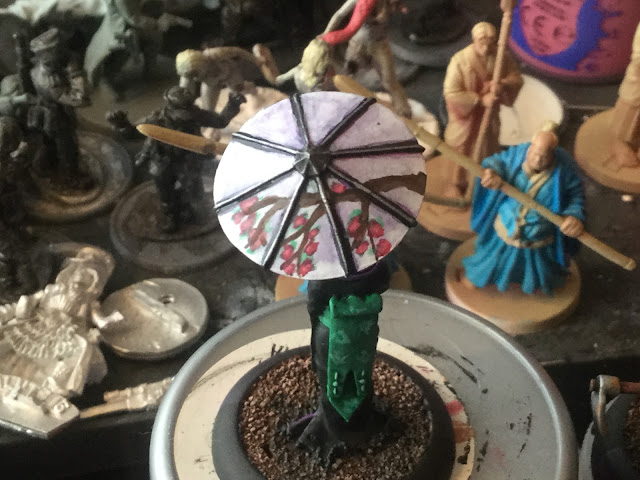 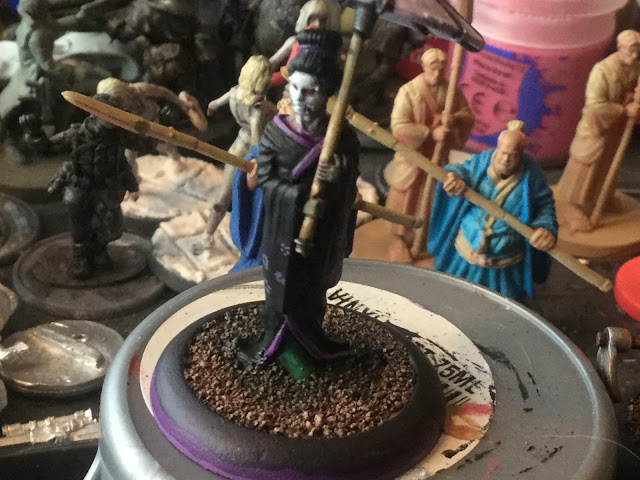 Lastly we have the Kairai, there is some blurb from GCT on these creatures as you can buy more seperately...

The secret and powerful art of soul trapping was thought lost for generations until Kato was judged worthy to know its dark secret. Yurei’s cruel mockery of the living, their anguished masks taunt the living for his amusement their fear adding fuel to his dark fire. They are puppets to their dark masters will. 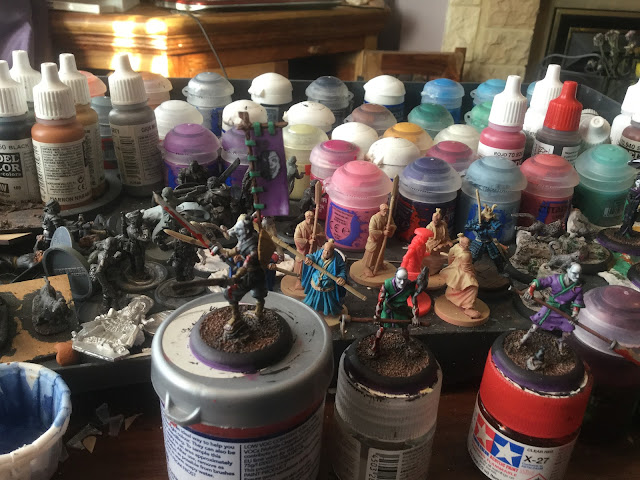 these guys all followed the faction painting rules with the kimonos of the villager/militia just having the main colours reversed.  For the armoured Kairai as he had a sashimono (back banner) I decided that is where the faction colours would be represented with just a generic black armour and grey kimono underneath and grey pants.  The Sashimono looked a little bare so I painted the japanese kanji for death on one side and the mask of Yurei on the other.

and finally we have the group shots of the starter set. 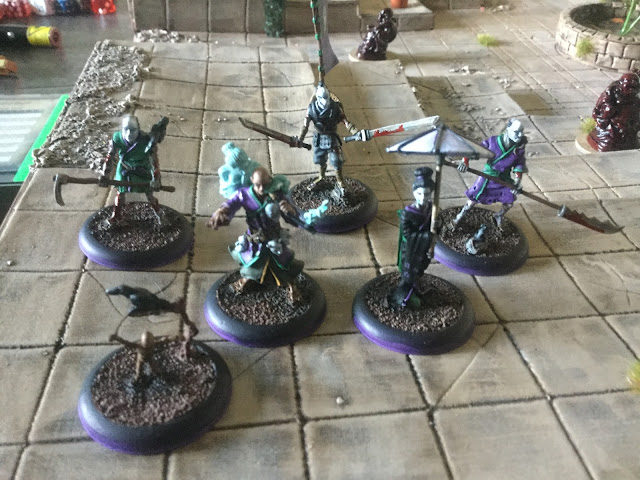 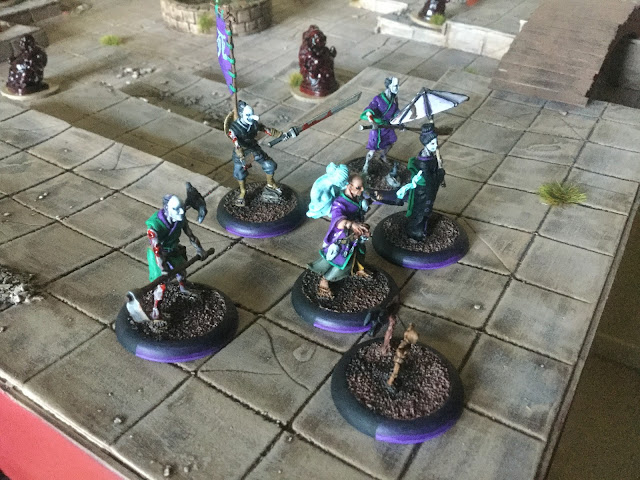 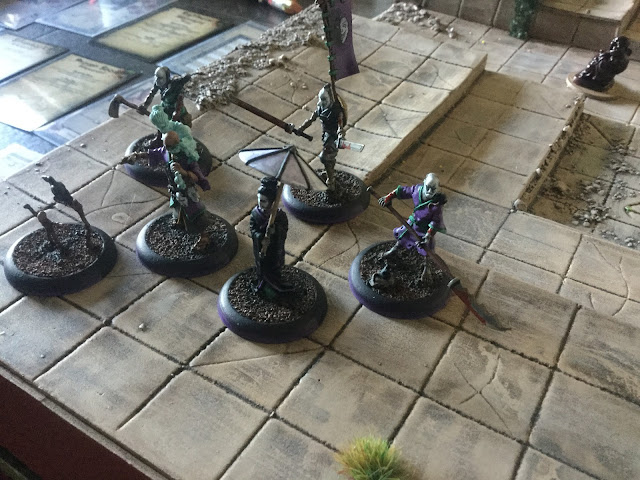 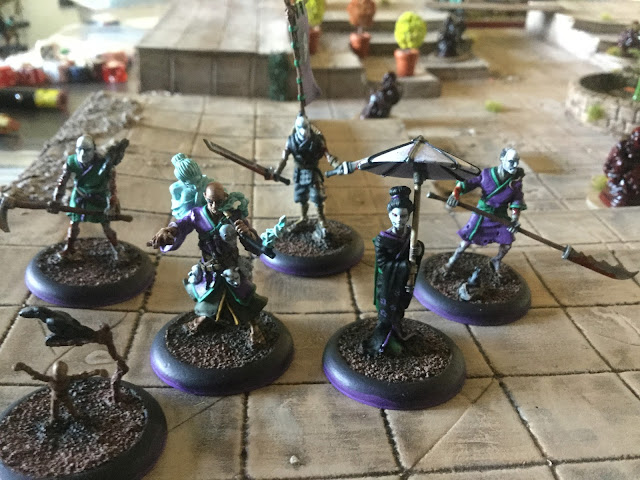 my apologies for the long post, normally I break up the review of the models to show them individually but I binge painted the whole set as they are so awesome and I'm procrastinating over some essays that are due soon.....

that's it for now, back to Pirates next.
hope you enjoy
dGG