All Things Zombie - Final Fade Out (ATZ-FFO), is a table top skirmish game designed by ED Texiera and set in post apocalypse America following some kind of viral contagion causing the “zombification” of the human population.  Now then pretty much throughout the game Ed states that it’s your game for you to do whatever you like including modifying tables. So that’s exactly what I wanted/needed to do in order to set my new campaign in jolly old Blighty. 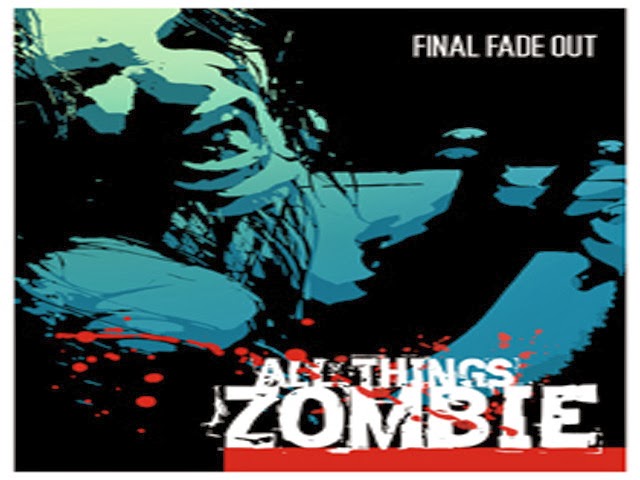 ‘We have everything in common with America nowadays, except, of course, language’ - Oscar Wilde 1887

Despite Oscar Wilde’s quote there are actually many differences between the US and the UK, far too many to state here and nor would I want to, but for our purposes that biggest one would be the availability of firearms. The ownership of weapons has always been tightly controlled in England since the 16th Century when it was illegal to possess a gun or bow, the laws were updated in the 18th Century (any dangerous weapon at all – a little vague!), again in 1987 following the Hungerford Massacre (self-loading rifles and magazine loaded shotguns) and finally in 1997 following Dunblane (handguns).  Before the bans in 1997 it was estimated that less than one person in a thousand possessed a firearm. Even our police force (now called police service so as not to sound too threatening) is not routinely armed, with very few officers carrying a firearm – just over 7,000 in 2009 against a total of about 127,000 coppers.  With the systematic reduction in armed forces across the UK our military is also becoming a thing of myth and legend!

That leaves our English survivors in a little bit of trouble…. or so it would seem.

Let’s face it nothing is ever what it seems! There are more weapons available than most people think in the UK, but more importantly for my campaign - the Isle of Thanet.  Aside from the armed response police vehicles that occasionally patrol down from Police HQ, there is an Royal Air Force (RAF) military base at Manston, although hugely scaled down and without any actual flights out of the biggest runway in Europe it still is a military base with armed MPs patrolling the grounds, an armory and rumour has it an old set of bunkers left over from the cold war that form part of the national nuclear defence structure, who knows what goodies lie beneath the surface?

There are other legal weapons scattered around the Island, most farms have a shotgun or two for pest control, these are usually single or double barrelled as pump actions are banned.  There is an archery club with a large membership meaning there are bows, compound and crossbows, even some target pistols (although these tend to be .22 calibre) in private ownership all across the various towns. Of course there are the less than legal weapons floating around! There are various gangs around the area ranging from rather pathetic little chav street gangs with little-to-no weapons up to organised Eastern European gangs who are armed significantly better (this may sound grandiose but Thanet has thriving ports and has been used to smuggle goods from mainland Europe for centuries).

Following the Second World War many servicemen came home from the front with mementos that they had gathered from the battlefields of Europe – Lugers particularly were prized and other German weapons including some Sub-machine guns! And then there are the service weapons that the now demobbed citizenry didn’t hand into the quartermasters. Lastly there are always those guns that sit in private collections, supposedly “decommissioned” these guns are often quietly restored back to full function.

So although not as prolific as in the US, firearms are available to the survivors in an English Apocalypse.  The biggest problem that they would face would more likely be the availability of ammunition, and this will be reflected by the use of the “Really Tight Ammo” rule on page 24 of the ATZ ruleset right from the beginning of the campaign. The Risk and Reward cards will be used as they are very useful in deciding who or what are lurking in buildings, with the addition of a couple of tables to better reflect the availability of weaponry in the UK it should speed up the game.

The best way to use the cards I think is to just ignore what guns are available.  So whenever it refers to a firearm the player (ie me) will instead roll on the “Firearms Table” below.  All other aspects can remain the same and be used as is.  For example using the left hand card shown in the picture – if the encounter was in a rural setting, the survivor would find a “Ganger” normally armed with a BA (Big-Ass) pistol, instead it would be a single “ganger” armed with whatever the result of the roll on the Firearms Table.  Looking at the bottom of the card, if the survivor survived the encounter with the “ganger” he would find nothing in the building of any use. Conversely the card on the right of the picture can be used entirely as is.  This does not make the whole process too complicated and can utilise the speed of the card system.  the tables below can be adjusted by +1/+2 depending on the location to be determined before the game starts. 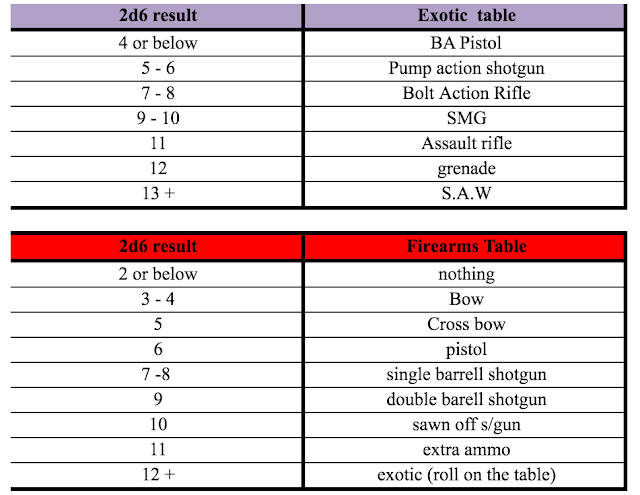 I have made special mention of the various types of shotgun in the tables.  In ATZ all shotguns fall into a broad category and that is fine in most games, but due to the gun controls on shotguns and the ban on the pump action guns etc I think that its only right to go into detail.

all shotguns still count as firing 6 shots for noise purposes and all dice used are counted in respect of tight ammo.

One of the other major changes that I need to make is the availability of armed police within the game.  With less than 5% of police officers being armed with firearms in the UK there is an obvious need to address this in the game.  Thanet has a major police station in Margate and smaller satellite police offices in Ramsgate and Broadstairs (these being the three towns that make up most of the urban settings on the Island).  None of these buildings have armed police stationed routinely at them, in fact the armed response units (ARUs) are based 50 miles away in Maidstone - the County Seat. Therefore the chances of encountering an armed unit are quite small, this combined with Kent Police's habit of sending out single manned vehicles (something I find incredibly dangerous!!) means that  I need to reflect this. The standard load out for an officer in the UK is:

So whenever the police are involved in someway I will need to roll on this table instead to see what I get.

Although this means statistically I'm more likely to encounter armed police than in real life, this is a wargame!

So these are my modifications for now, there will be more dependent on the scenario played and how the storyline develops. Next time, I will introduce the principle characters and the start of the first day of the apocalypse.