Sadly I've been working over the Halloween weekend and have missed all the celebrations and have been too tired to put together a suitably Halloweeny style game (being a shift worker sucks some times!) so instead I've just got a post that was due to go out on Wednesday instead....sorry.


following on from my recent series of plastic Bushido Pirates of Jung sourced from Damon's purchase of the GCT Studios boxed game "Rise of the Kage" and its expansion set "The Docks of Ryu" I've managed to "steal" a few more of his figs for my own Bushido faction.  This time though I've taken some from the main game, they are duplicates as Damon was able to purchase not only the game but loads of additional minis (it worked out to about 75p per mini!).  As I've said in previous articles the plastic minis for the game have now been made into metal versions for Bushido - New Dawn i.e the tabletop version and although the detail is a little soft they actually look very good even alongside their metal equivalents.

Kenta is a true samurai in every sense of the word. As a boy he knew his path, the one he has walked for many cycles in service to his family and the name Takashi. A veteran of countless battles and campaigns, he is a master swordsman, no foe able to outflank him due to practised footwork and deft movements. Many times enemies foolishly thought they had struck the killing blow but the ancestors favour Kenta amongst all others. Though quietly spoken his presence in battle banishes any fear in his troops, steeling their hearts for victory. 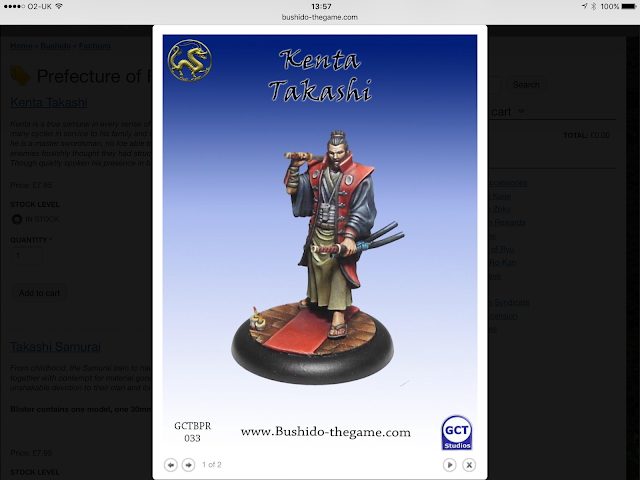 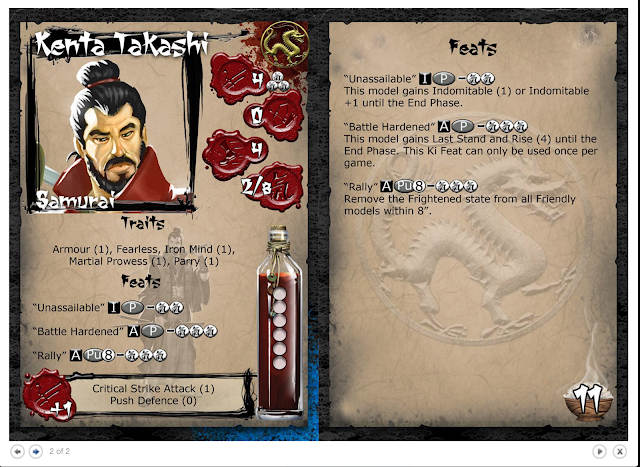 This is my version of him, not quite so polished as the metal version painted up by the Studio, but I'm happy with him.  I thought I would also try out the new basing idea for showing LoS in the game that I used for the Pirates.  Let me know what you think. 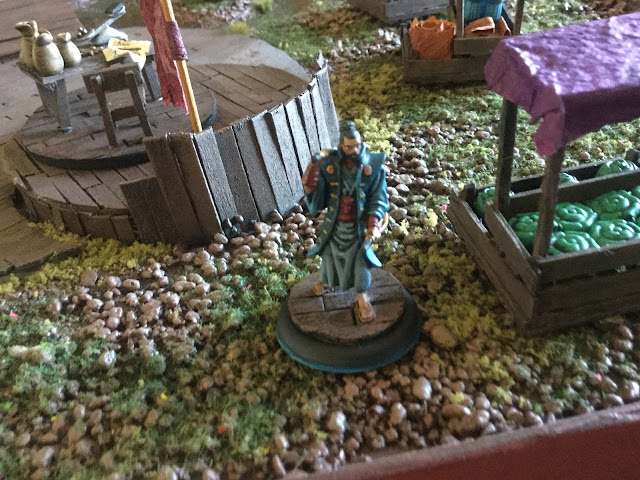 Next up is Iiijo Makato...

A ward is a member of a noble clan who has been taken in by another clan to be raised for a time. The practice varies, with it sometimes being undertaken voluntarily - to help prospective heirs learn the customs of other clans as part of their education. It can also be involuntarily, with the "ward" actually being a "hostage" for his or her clan's good behaviour or until a ransom is paid. Sometimes, as part of marriage alliances, one of the betrothed is taken as a ward so he or she can get to know his or her future spouse. 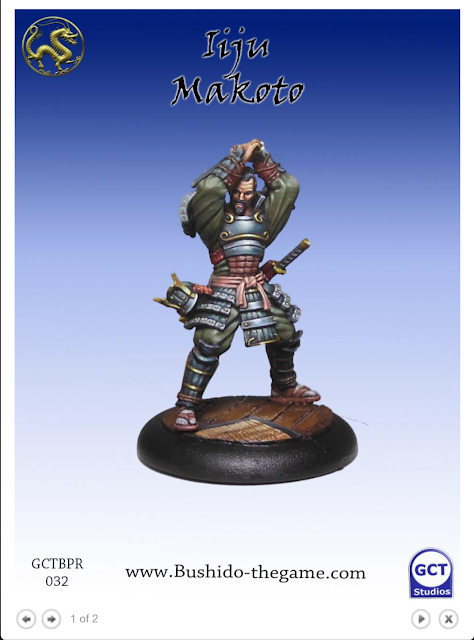 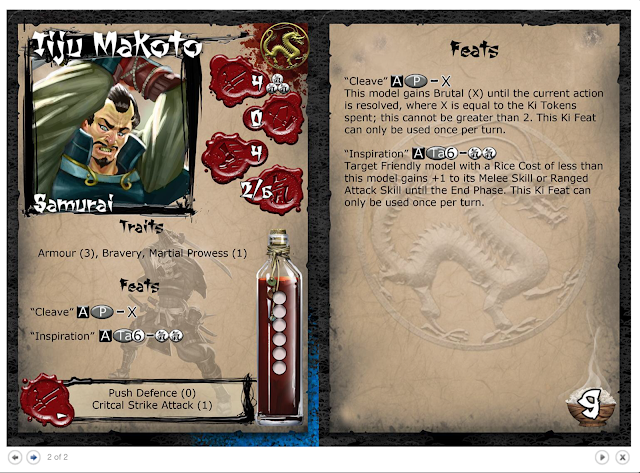 and my version, although he is a ward and not a member of the Takashi family, he has been equipped by them. 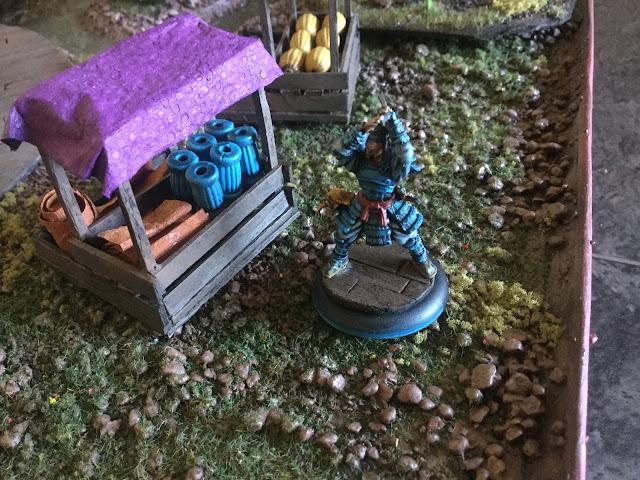 and finally for today we have Bachiko Takashi.... 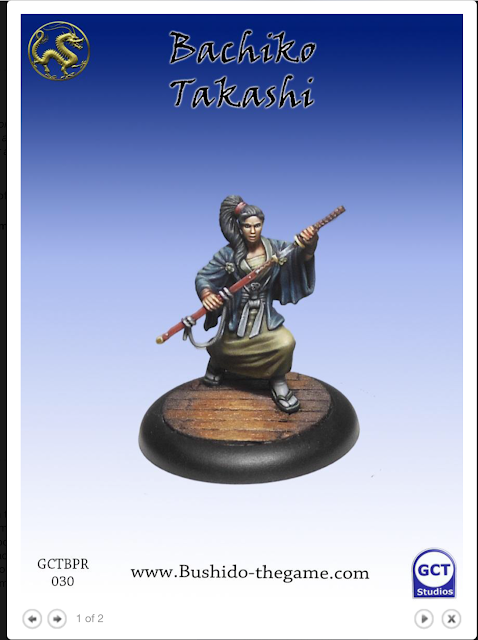 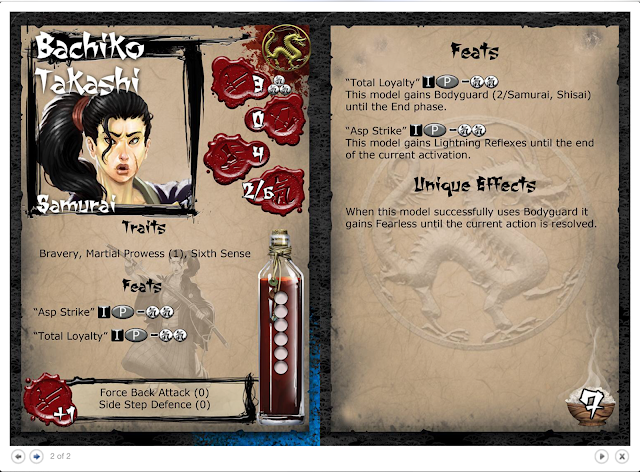 and my version of her 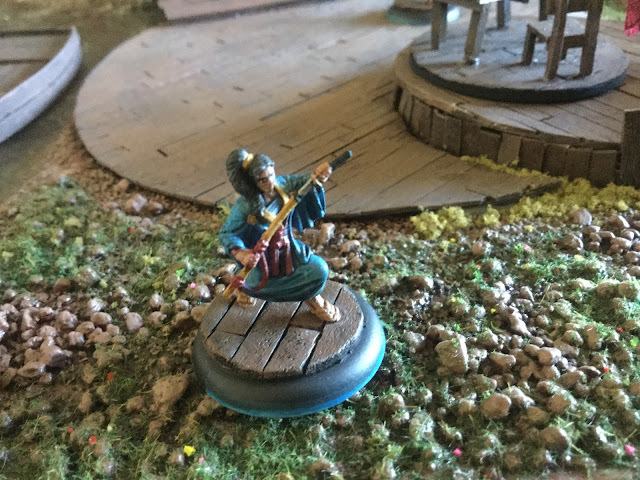 Use wise the two men are particularly good in combat as reflects their samurai status, heavily armoured they can go toe to toe with most opponents, with plenty of bite.  Iiito's "Inspiration" is particularly useful as it boosts other warriors around him.  Bachiko is of course still an excellent warrior but the best thing that she brings to the party is "Sixth Sense" allowing her to defeat the camouflage of the sneaky ninjas which causes a lot of trouble for most factions, this means she can act as a ninja radar!!

That's it for this time, I have some guards of Ryu and a generic Samurai to go from this set, there are of course hundreds of these figures that Damon has and I have left him to deal with them all!!  I will post them up here when I'm done but for now.

Email ThisBlogThis!Share to TwitterShare to FacebookShare to Pinterest
Labels: Bushido, Docks of Ryu, Prefecture of Ryu, Rise of the Kage