ATZ - the Board Game part 1

Hahahaha yes shockingly this post is not about Bushido, instead it incorporates the unboxing of All Things Zombie (ATZ) the board game, published in 2009 by Lock and Load. The game is by Two Hour Wargames and Ed Texiera as the designer.  I was the very lucky (and grateful) recipient of the largesse by the lovely Gilberts of “The Gamers Cupboard” fame. It won’t be a comprehensive review of the game as I will leave these things to the experts of which there are many including our very own Bryan “Vampifan” Scott, who could and probably have taken the game through it’s paces, I have a feeling that it has been rewritten as well.  I’m also going to run through in the form of a batrep the first scenario from the game that I played recently with my son. 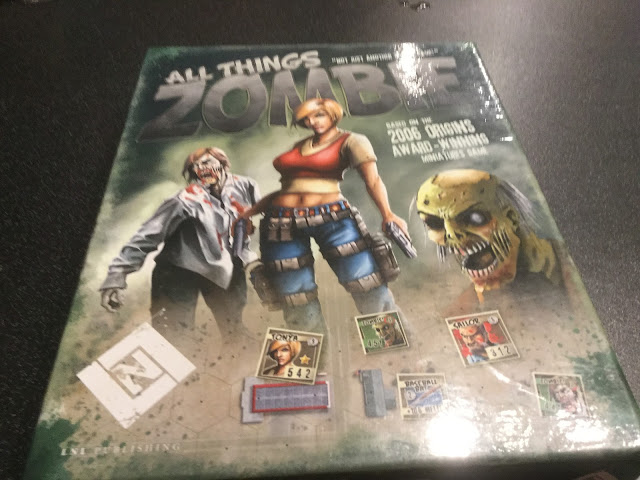 Inside the game you have five white dice and one black, a full-colour manual with all of the rules in it. You have cards for each of the set characters with all of their profiles and gaming stats on.  There is a turn on track, with which you can mark your progress (I’m not sure if the scenarios require limited turns but it’s there should you need it.  Also you get a pack of cards for randomising the amount of zombies that spawn in an area and some loot cards for when you explore buildings. There is a full set of card counters all in colour and printed on very thick card which is very durable.  There are two double sided playing mats printed on the same card and marked out with hexes all given a specific designation and with buildings covering the board.  Lastly you also get a a quick reference guide, this has on it the insight reaction test, received fire reaction test and other valuable information. 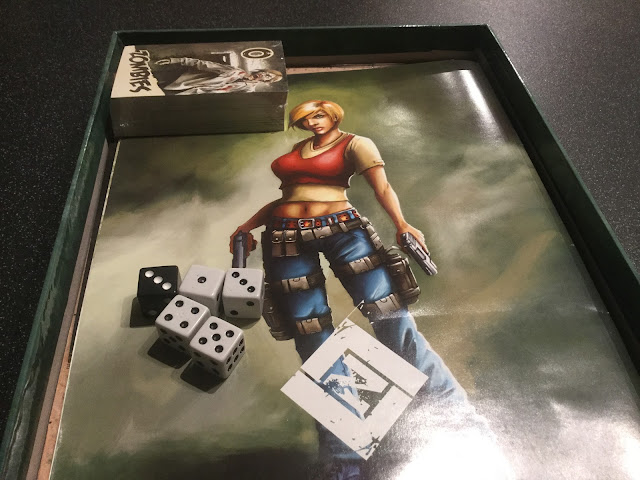 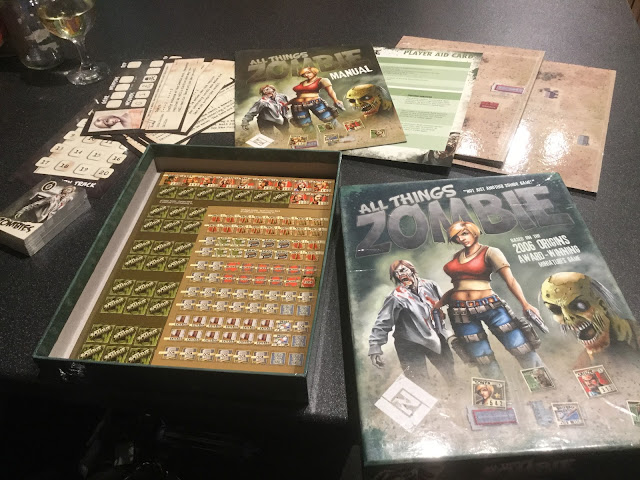 As stated earlier we will playing the first scenario – “For a Few Minutes More”, set on Apocalypse Day +26. Stefan will be playing Tonya who is a “star” and I will be playing Beck her sidekick and buddy, who is a “grunt” but for ease I will be playing as a “star” and we will both be competing against the zombies controlled by the game mechanics.  The idea of the scenario is for the girls to explore the buildings on the map until they both find a weapon or they have searched all of the buildings and escaped off the map edge.

Tonya strode down the dusty road as if it were the Strip back in Vegas, larger than life and as bold as she ever was back in the day before the world blew to hell.  Beck snuck an admiring glance at her friend, trying to emulate the confident and graceful stride that Tonya seemed to effortlessly pull off.  The girls had been moving constantly since the early days of the Apocalypse and the end of humanity as the dominant species on the planet.  Moving during the day and fortifying whatever shelter they could find at night, barely sleeping and always on high alert, they were exhausted.  Not that you would know from looking at Tonya, Beck reflected ruefully, Tonya looked like she had just woken from a solid ten hour slumber – bright eyed and bushy tailed! Only the grime on her clothes and the 9mm in her right hand betrayed the recent turn of events and stopped her friend from looking like she had stepped out of the pages of a magazine. “Well maybe ‘Guns and Ammo’ magazine at least” Beck mused with a snort and a supressed laugh, earning her a quizzical look from her BFF.  This only made Beck laugh harder as she bent over holding her sides, every enquiring look and now clear exasperation from Tonya made it worse until tears rolled down Beck’s filthy face leaving tracks of clean skin down her sunburned cheeks.

Several minutes later she managed to reduce the noise of her raucous laughter down to a few little hiccups and snorts, much to the annoyance of her friend, when she heard the first shuffles and moans of nearby zombies.  “Damn it Beck” Tonya sighed, pulling the slide on her pistol and checking to make sure a round was chambered.  Eyes up and scanning the girls moved into survival mode and headed toward the nearby residence.

That's it for this post, next one is the batrep - stay tuned!
hope you enjoy
dGG

Email ThisBlogThis!Share to TwitterShare to FacebookShare to Pinterest
Labels: AAR, ATZ board game