I thought I would show the different stages of how I put together the terrain tiles I've been working on. The first one was the factory tile. 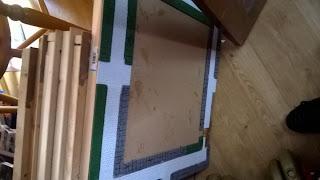 The tile is 3mm MDF strengthened by a wooden frame, I wanted the tiles to be able to be placed in any direction so there would be a road connection in the middle of each edge. The roads are cobblestone effect plastic sheets from Amera plastics - very inexpensive at £2 a sheet. The paths were made of foam sheets and with the slabs carved in with a ballpoint pen. 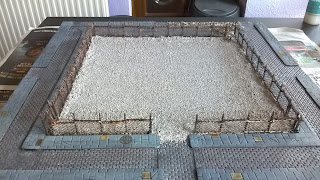 The fence was scratch built matchsticks and covered by a netting type fabric before being spray painted and then drybrushed and finally hot glued into place. The barb wire I scratch built using a tutorial I found online from a model railway enthusiast. It was so cheap to make - about £1 compared to 5 or 6 times that for shop bought from army painter for the amount I needed! 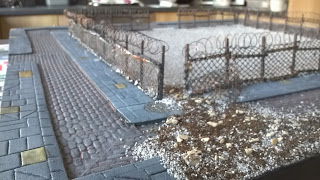 A small breach in the fence following an explosion nearby! 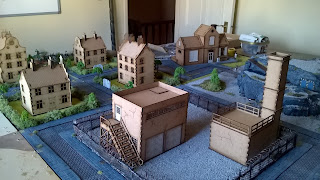 The finished tile with the medium factory and power plant from sarissa precision (now painted) I've just got to add some power lines, which I have ready just need to base them.