Ling Mei grabbed her keys from the kitchen counter and headed out.  Across from her building sat the black Chevvy Suburban she had treated herself to after winning her Olympic silver in the last games. Jumping into the beast she checked under the seat for the Glock taped to the bottom, satisfied it was still there she started off to the Gas 'n Save so she could top off the tanks and grab some food. 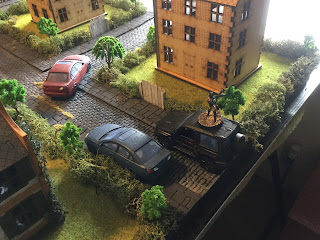 Pulling away she manoeuvred around some cars that looked abandoned by their owners they were so badly parked.  Tutting under her breath at the terrible driving of others she headed toward the junction.  Across the way she could see a small group of citizens streaming toward the junction from the other side.  As she arrived two "people" sprang up from behind the hedges bordering her building.  Something was not right with the way that they moved, like a puppet on tangled strings.  An old man accompanied by a teenager ambled in her direction and emitted a low moan. Looking carefully at the odd pair she saw blood dripping from their jaws and running down the front of their clothing.  Zombies! The word described the shuffling creatures perfectly. Ling Mei moaned softly to herself as she knew what she had to do. Hitting the gas of her Chevvy, the big car leapt forward crunching into the zeds and smashing them into the pavement.  The sound of the gunning engine caused two more of the creatures to look up from their bloody meals....

Up ahead the citizens stopped at the junction in fear at the zeds in front of them, seemingly rooted to the spot they could do nothing as the undead monsters ran at them with outstretched hands.  Ling Mei looked out the window as she saw some of the citizens go down with zombie jaws taking big chunks of meat from their bodies.  The sight of this horrible feasting caused her to veer of the road momentarily and the crunch of gravel under the tyres brought her to her senses in time before she crashed into the side of the store.  The other humans fought desperately with the remaining z, trying to keep its snapping teeth from their throats.

Ling Mei knew that their was nothing she could do in time and rushed to the pumps with a burst of speed.  The big Diesel engine of her SUV like a siren call, caused three zombies to shuffle out of the shadows.  Throwing open her door she dashed to the pump and started to refuel.  It was not long after she heard the click of the fuel flow stopping, the pump had run out of diesel! Cursing she looked up in time to see a pair of zeds bearing down on her, she had just enough time to draw her swords before the were upon her.  Parrying the first z's clawed hand with her dominant sword she thrust her offhand blade through it's forehead, dropping it to the floor.  Stepping out from its dying grasp she swept her foot out and tripped the second creature to the floor before shearing its head from its neck in a single downward blow.

Diving into the car she sped off in time to see three more zombies fall out of the store.  Maybe she would get some food after picking up JJ!