The mystery of the zombie virus - the AAR (part 1)

With the squealing of well worn tyres, the camper screeched to a halt just shy of the courtyard in front of the majestic old building.  Carved into the worn stone fascia was the name of the formidable structure.

"Jungville General Hospital, we made it!" exclaimed Fred, spitting the dust of the road onto the paving slabs that led up to the imposing main doors and adjusting the katana strapped to his back.

"Don't spit Freddy, it's not polite." drawled Daphne as she stepped lithely out of the vehicle, checking the safety of her huge Glock was definitely off.

"Hey guys, like are we gonna go inside the creepy big creepy building? I just hope there is some food in there, what do you say Scooby-Doo?" added Shaggy as he disembarked, nudging the barrel chest of the Great Dane that jumped down beside the hairy hipster.

"Quit your messing fools!" snapped Velma angrily, the fiery red head dropped athletically to the street and reaching back, dragged a massive chainsaw from behind the seats. "Those dead-heads are looking our way."  With a jerk she whipped the starter cord of the saw, ripping it into life. "Let's go show  'em what the new Mystery Inc's all about...."

This batrep will be in a different format to how i normally write them.  In the past I have written them as a narrative, which has been a lot of fun but a lot of hard work trying to set the scene.  What I'm going to try to do this time is a mix of narrative and what is essentially my notes cut and pasted onto here, then a bit "tarted up".  On asking for feedback on these batreps there were comments regarding lack of photos so hopefully this lack will be addressed.

We start with the battleground..... 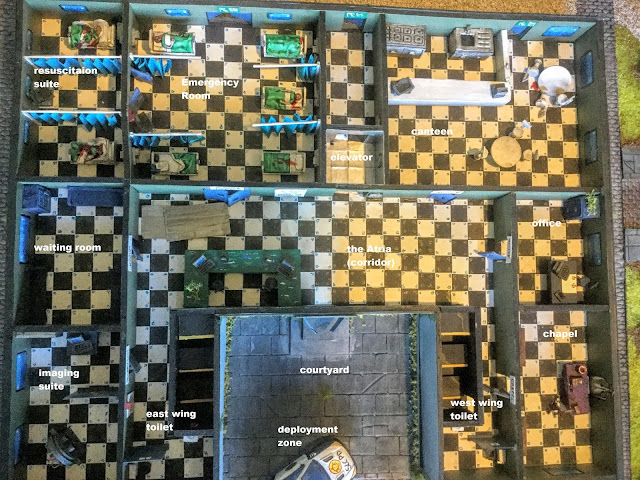 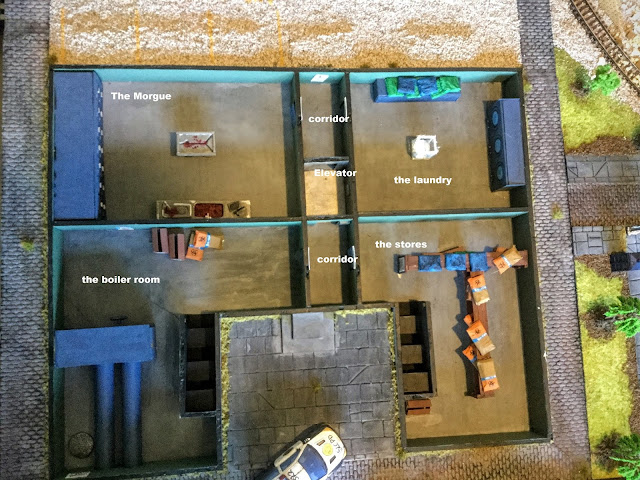 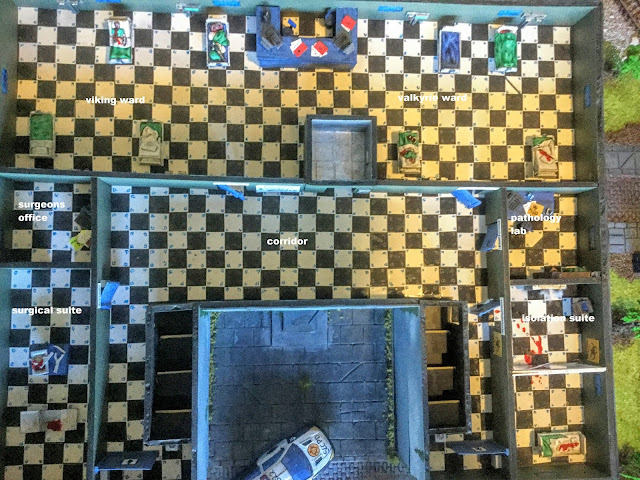 and finally the roof 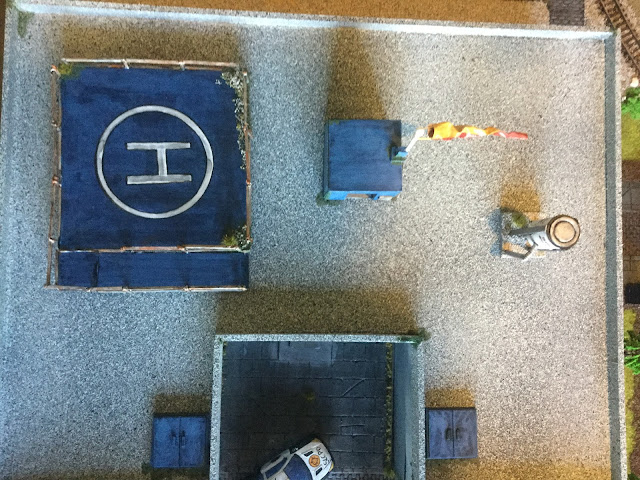 when the gang first move onto the table, there are 5d6 worth of zombies deployed. Rolling the dice i score an average 16 and they get scattered around the outside of the building - none on the inside, there are plenty in there already.... 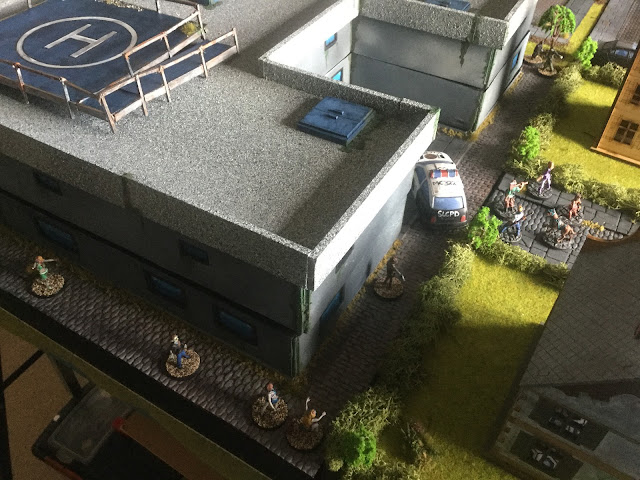 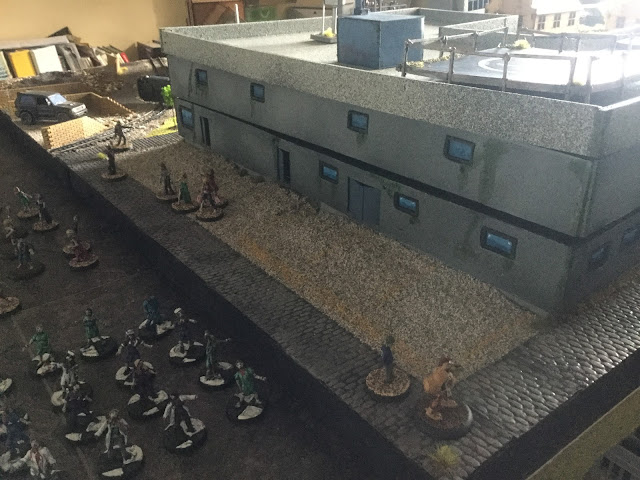 Velma grinned as she leaped at the undead police officer lurking behind it's cruiser, only during the adrenaline rush of combat could she switch off the constant stream of thoughts that now coursed through her brain since the fall of humanity.  Scooby-Doo galloped alongside her, almost playfully outrunning her and barreling into the zombie, teeth snapping, trying to get a hold on the zed's arm. With a yelp he was swept aside as the former lawman crunched it's huge fists into the K9 body armour  covering his flanks and throwing him to the floor in a heap.  Velma didn't flinch as the sharp cracks of the other's firearms picked off the nearby dead-heads, nor did she waver when the police zombie turned it's cloudy eyes back on her.  With a whoop she drove the whirring blades into the creature's torso, gunning the motor she tore through it's chest and into it's head in a shower of gore.... 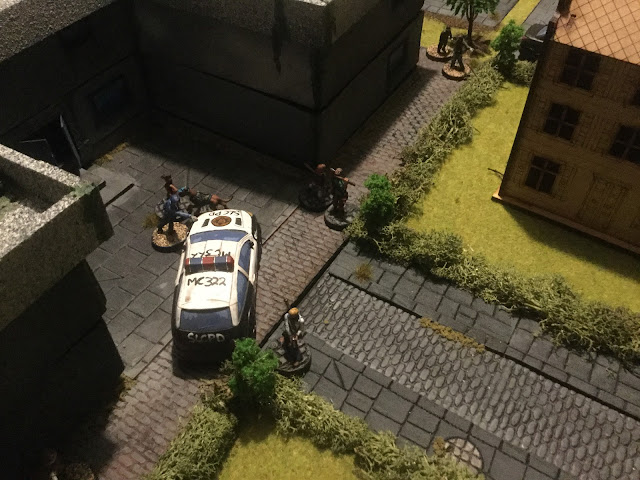 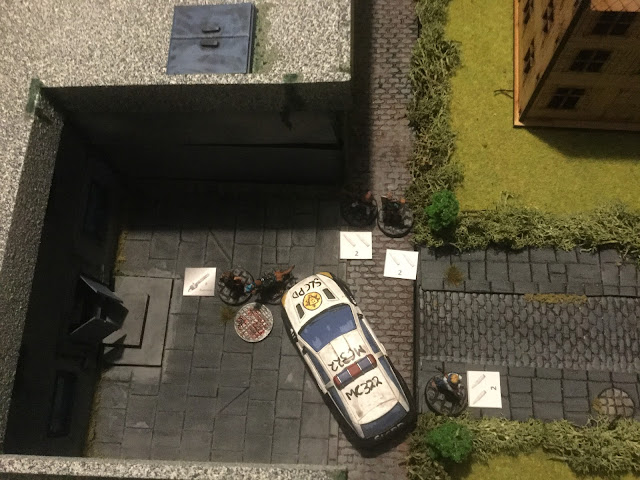 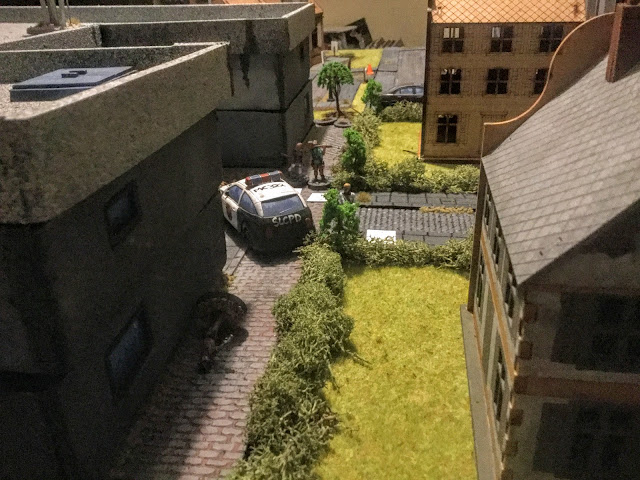 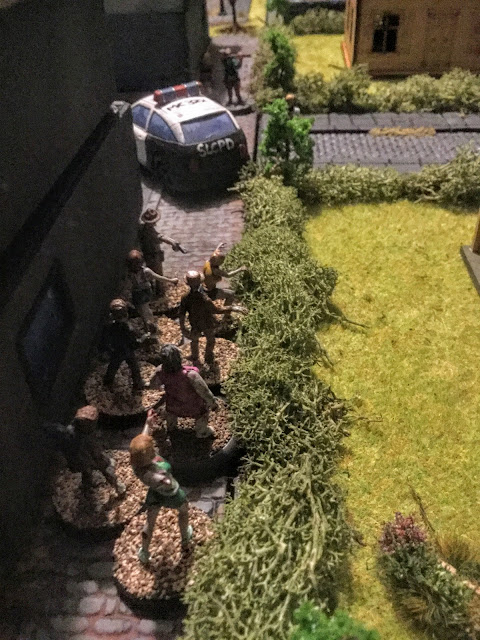 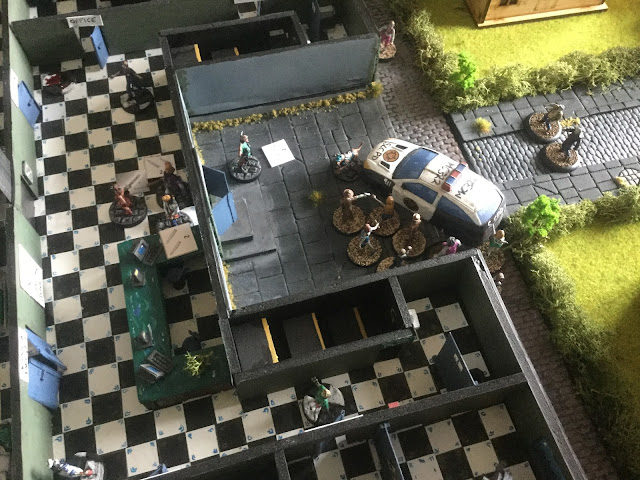 Shaggy heard the moans of the approaching zombies get more hurried as they shambled toward him. Lifting his pistol he sighted down the length of the barrel, targeting the head of the nearest brain eater - click, click.  The sound of the hammer falling on an empty chamber, gave him that sinking feeling. Desperately he re-holstered the gun and tried to heft the big axe he was holding in his weaker hand.

Across the way he could see Scooby-Doo ripping the throat out of zed before raking his front paws down the face of a second, tearing big lumps of flesh from the bone.  Using his bulk, which was significantly greater with the armour rig he was wearing, the Great Dane pinned a further two zombies to the floor.

The first of the zombies piled into Shaggy then and he lost sight of his faithful (and now quite frightening) old pooch.  The axe seemed to weigh a ton as he feebly thrust the axe-head spike into the eye of the zed, dropping it to the ground.  Using the oak haft of the weapon he tripped a second but was soon desperately trying to ward off the grabbing arms of a pair of zeds.... 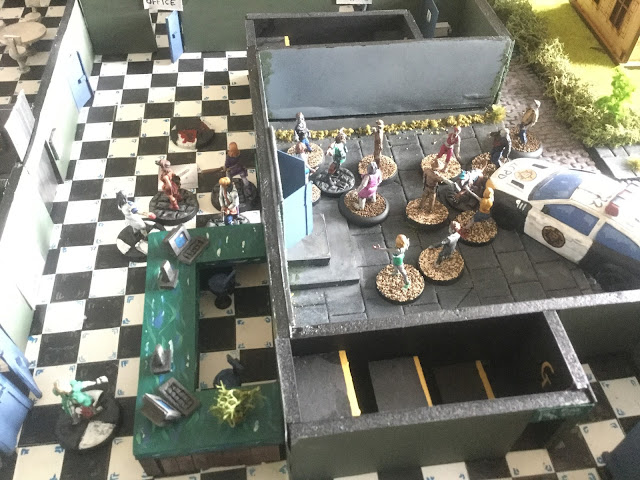 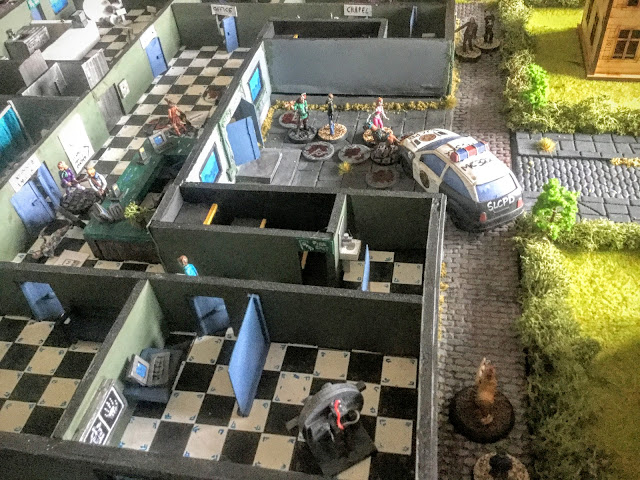 "Hello, hello.... Freddy, V there's no-one on the phone just some weird clicking noise!" With a jab of her finger Daphne ended the call and looked around at the other two just as Fred stabbed down with his katana into the brain pan of the floored zombie.  Behind Velma two former patients of the hospital shuffled absently around, as if they couldn't quite make up their minds whether to attack the fiery red head. "I don't blame them" she thought to herself....

"Don't blame who Daph?" Velma asked curtly as she fingered the trigger of her saw, glancing back at the zeds with a smirk.

"oh no-one V!" she stammered, colour rising in her cheeks, realising she had spoken her thoughts out loud....again. "I wonder how the boys are getting on?"