Vimiero, 21st August 1809 - a battle report the game was played over the course of the day

Hi all (warning this is a long post, get a cup of coffee and settle in)


just recently most of my posts have been about zombie/post apocalyptic gaming, in fact most of my hobby recently has revolved around this theme.  However i do play other systems, in fact this blog is titled a Warhammer blog although it hasn't featured that in about 4 years and probably won't for a while until GW (boo-hiss) sort out the Age of Sigmar abomination.  Just after the New Year I was able to return to another game I'm very passionate about - Black Powder!

I have some semi regular games with a couple of good friends, normally revolving around BP or Bolt Action.  The BP is set in the Napoleonic era, one of my favourite periods of history.  So on 4th January my buddy Rich and I, who live in East Kent travelled up to Crowborough (East Sussex) to game at my old mucker Chris's man cave.  Chris has a very large room in the top of his house with a huge table, i'm guessing and i'm sure Chris will correct me but it has to be about 12x6 foot!  Chris is also a prolific painter and despite only starting BP last year he has amassed an astonishing amount of figures.  In fact all of the figures in the following report bar 12 (yes 12 measly models!) are his. The game was played over the course of the day and was so all consuming in its excitement that we played through lunch!

Anyway i will hand you over to Chris, who not only supplied everything and hosted us but has also prepared the bat rep. Enjoy.....

DEPLOYMENT
1. The British deploy first and may be deployed in any permitted formation within their marked Divisional zone. The French may then deploy as above.
2. 50% of formed British battalions must be deployed behind the crest of the ridges (see below) or behind the ridge. This was the first time Wellesley used the reverse slope in a defensive battle.
3. The 43rd Monmouthshire Light Infantry and 60th Rifles may not deploy into skirmish formation until a French unit comes within 12".
TERRAIN
1. The hills represent ridges running along the table length. The crest of the ridge runs lengthways along the halfway point of the ridge. A unit on one side cannot see a unit on the other side or shoot over the crest of the ridge.
2. The two orchards and the vineyard (not on map) class as soft cover and may only be entered by troops in skirmish formation. Corn fields are table dressing and provide no bonus or penalties.
3. Vimiero and Ventosa are built up villages and provide +2 to both saves and combat resolution. Toledo is a farm and provides only +1
4. The impassable rocky area is impassable to all troops.
VICTORY CONDITIONS
Broken Divisions retiring count as lost.
Glorious French victory if they take Vimiero, break 3 or more British Divisions and lose no more than 3 Divisions.
Victory if they break 3 or more British Divisions and lose no more than two.
Any other result is a British victory.
British achieve a glorious victory if they obtain a "Victory" and occupy Toledo by end of game.
Duration 12 turns. 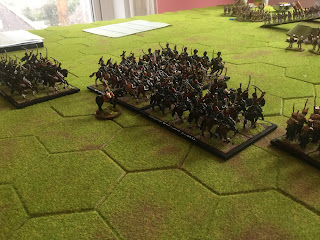 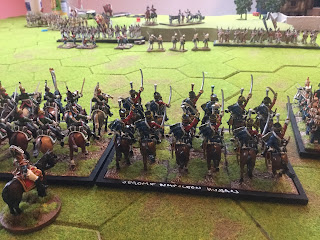