this will be my last WIP for this project- Yippee!! mostly because apart from some detail on the inside it is largely done.  All of the rooms are now playable including the roof.  there is always going to be more bits and pieces i will add in order to add atmosphere to the piece - posters, blood splatters, weathering and the like but by and large it is complete. Now all I have to do is paint up all of the beds/trolleys i got from Grekwoods so that i can add them to the wards and A&E to give them substance.  That and the medical zombies that i've got (also Grekwoods) but that shouldn't take me long.

Throughout this project i have added objectives scattered around the hospital in order to keep scenarios fresh and get maximum use out of this huge piece of terrain (2 foot x 2 foot!!). So in the basement we have the sewer exit - can players escape this way? the morgue - is this where patient zero can be found or a loved one? the stores - what is in those bio bags? on the ground floor we have A&E, the canteen - can supplies be found? the chapel - is there a supernatural element? In the office - is there something on the hospital database that can help? and so on.

so onto the bits i've just finished i.e first floor and roof.  We have the pathology lab, a coffee stirrer shelving unit houses medical books made from foam just double over. On the desk i made a microscope and a rather poor petri dish (sorry, one of the bits i think i could have done a lot better) out of scraps of mdf and foam. The files on the desk refer to patient zero and could be a clue for a cure?
The next room is the isolation suite, after the x-ray machine & room i built this is my fave room.  The room will house one of the grekwood beds (yet to be painted) behind the plastic curtain, made out of heavy translucent plastic that some 4Ground buildings came in glued to a wooden frame.  The TV screen is cracked and broken - from the creature that broke through the curtain? with little wisps of smoke (cotton wool). 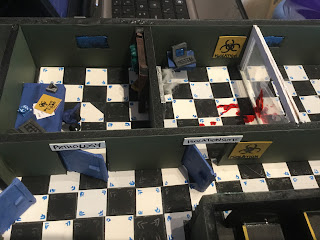 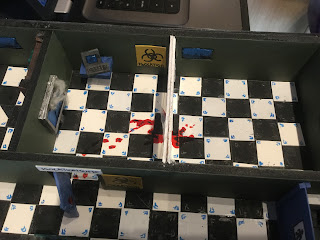 Next is the wards, Valkyrie (female) and Viking (male) wards, seperated by the nurses station.  This ward looks pretty bare without the beds (i know, i know they're on the painting table i promise!) but i did add some diagnostic monitoring on the walls where the beds will go.  I wanted this space to be fairly open as the whole piece can be a bit claustophobic, so no curtains around the beds. 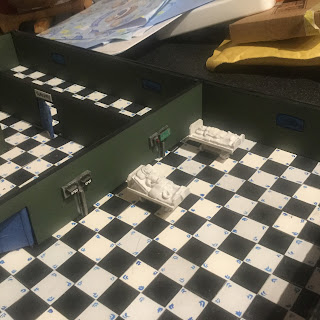 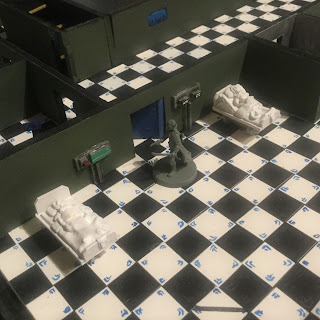 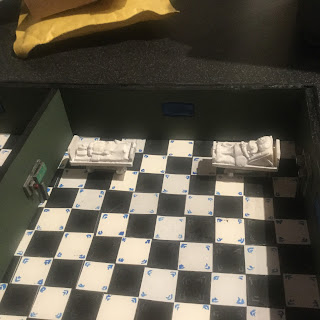 Lastly on this floor we the surgical suite.  Originally it was going to be one long room but i decided to divide it up into the surgery and surgeons office,  Just a walk-through divide but i think it gives it a little more character.  The office holds more clues, inc a Top Secret document lying carelessly on the desk and a file on the floor that could be important?  The surgery itself holds a table of instruments (not a fan of what ive done here as they're a bit big but my sausage fingers can't do tiny!) and a surgeons table.  I researched a few surgical tables and ive seen a few from when i take patients into pPCI units, so i know it looks more like a dentists chair but believe me (those who have never had surgery) that modern surgeons often use tables that can move and manipulate patients around. 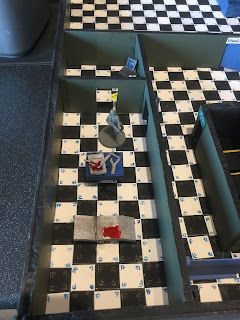 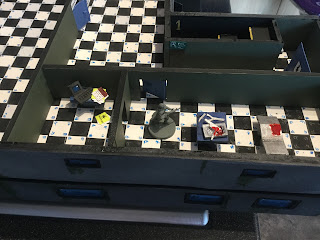 Lastly, lastly is the roof.  I showed you a WIP a few weeks ago of the spray i used on the roof and it has turned out really well (imho).  To that i have added the lift shaft complete with wind sock and detachable roof. The sock was just made up of paper towel, stiffened with pva glue and the flag pole was a cocktail stirrer that my wife found for me.  The helipad was scratch-built out of foamboard and
matchsticks that i hotglued together and weathered up a bit, unfortunately the paint has bowed the foamboard and it looks a bit sagged :(  I have added a couple of trap-doors where the stairs would exit, i could have put two more buildings on the roof but i think it would have crowded it up a bit. Finally I built a little tower, it was going to be water storage, but i changed it to gas storage just to liven things up and making it a bit more spicy........ the tower is made from a bottle top of a shampoo bottle, coffee stirrer legs and a drinking straw piping. 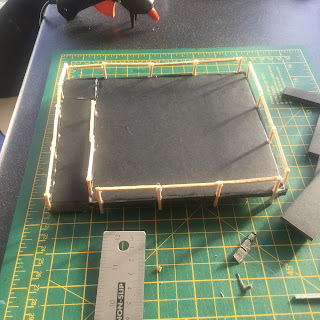 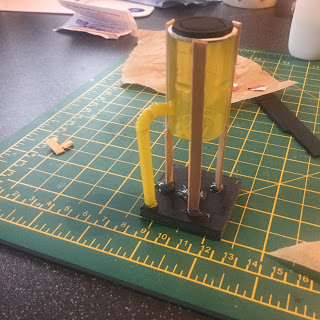 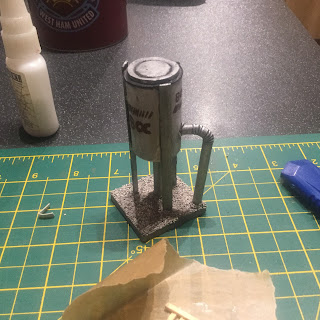 The whole building was weathered a little bit using moss that i made up using a recipe i found on sarcophagi's blog and some green and brown inks.  I'll probably do more at a later stage. 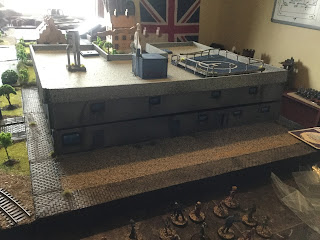 So that is the project pretty much done, as much as they things are ever done! All i need to do now is finish the beds and zombies and find an ambulance and a helicopter model!