"Well sports fans, have I got a treat for you!  Not only will you see blood, violence and destructive mayhem, you may even see the game being played with some style.  Yes thanks to our sponsors BloodWeiser - Ale with Attitude! we proudly introduce those gorgeous Elven gals, the Football Fae, the sirens of the gridiron - the Alzuri Angels!"


Following on from my last post regarding Blood Bowl, I thought I would showcase one of my "alternate" BB teams - the Alzuri Angels.  The Angels are a High Elven team, that I spotted online a few years ago from a company called Shadowforge, an Aussie miniatures company specialising in female figures - Gridiron (note the link is for the Fighting 15s, the supplier for Shadowforge in the UK).  At the time I was looking for anything that wasn't GW and these ladies certainly fit the bill.... 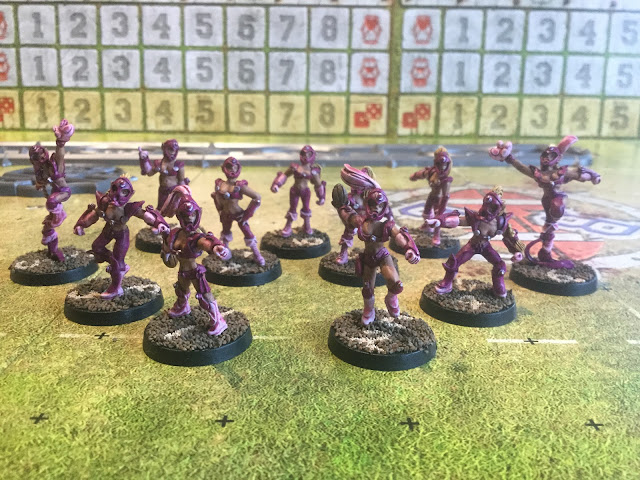 Commissioned by Prince Andris Deftblade - Lord of the Alzuri Heights, Keeper of the Sacred Chalice, Protector of the Shrine of Alfeyri Nubaris, the Alzuri Angels are a High Elven team with a difference - they are all female!

The crown prince, is well known for his skill with bow and blade, his love of rare elven wine, frivolous gambling and his hatred of the inferior races (all other races....).  The legend goes that when facing a particularly mediocre human team, the prince who then owned a male elf team called the Alzuri Avengers leaned over to the opposing team owner, a noble of a wealthy city-state and bragged that the humans were so inept even the Avenger's cheerleaders could beat them. The human, outraged by the condescending statement immediately challenged Andris to a wager.  Still clad in their cheerleader costumes, the beguiling elven beauties thoroughly trounced the humans with a display of acrobatic skill, accurate passing and downright vicious low blows...  The prince immediately sold the Avenger players to his cousin and the Angels were founded!

So let me introduce the squad. Firstly we have the teams two throwers.

Number 1 and team captain is Calarel "Hail-Mary" Helemaris.  Calarel is a master (mistress?) of the passing game even among elves, picking passes that seem almost impossible and drilling the football across the field of play with incredible accuracy.  A leader on and off the pitch she inspires her team to play hard and fight even harder!

Number 2 is her understudy and protege - Aneirin "The Bird" Reyven.  Under the watchful eyes of her captain, Reyven is progressing well.  Young by elf standards (90 years old) she can be a bit rash in her passing, leading to some embarrassing interceptions (the worst by Samuel Furfeet, a 3 foot tall halfling player) she none the less has produced some astonishing passes that have wowed the fans. 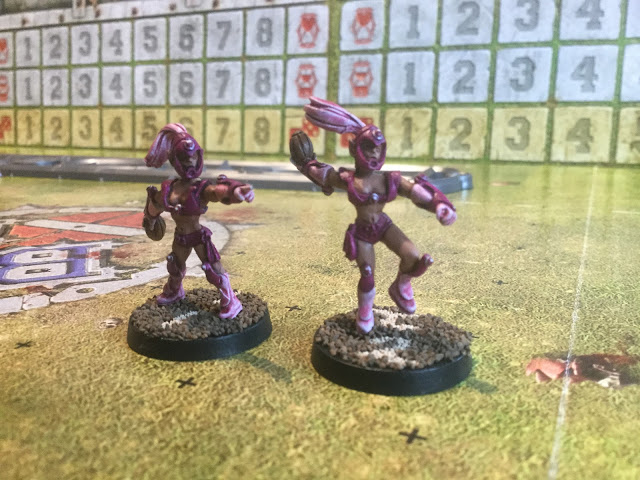 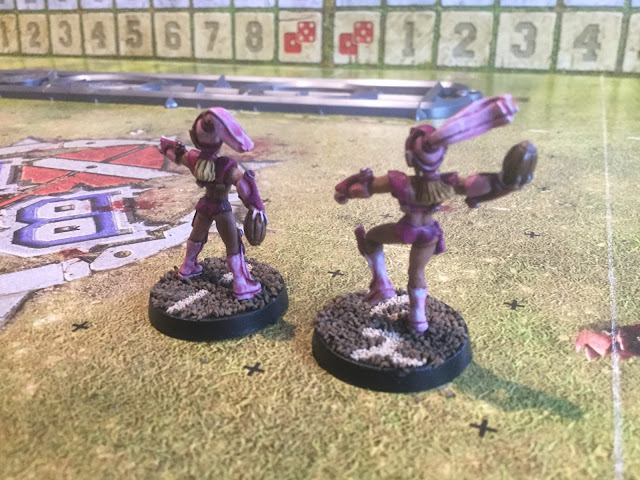 Next we have two of the teams catchers - Ayla Faerie and Alissa Gendove.


Number 3, Ayla is as elusive as her surname would suggest! quick on her feet and so nimble she ducks and weaves through opponents as if they weren't there, finding herself in open ground ready for that perfect pass.

Number 4, Alissa is an amazing, agile acrobat.  When the football comes over the top, she springs into action, plucking the ball from the air with ease! 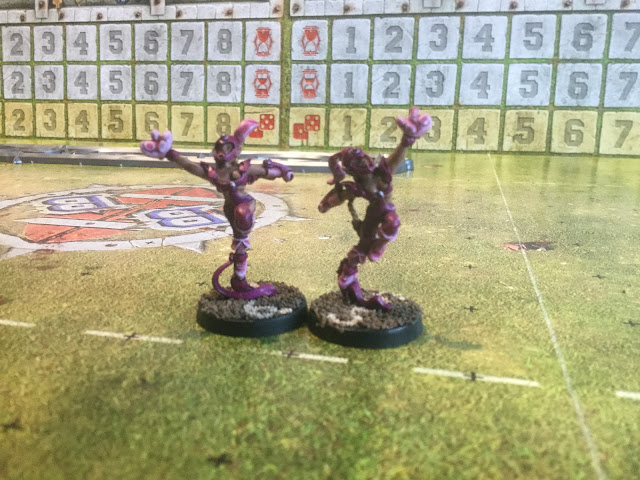 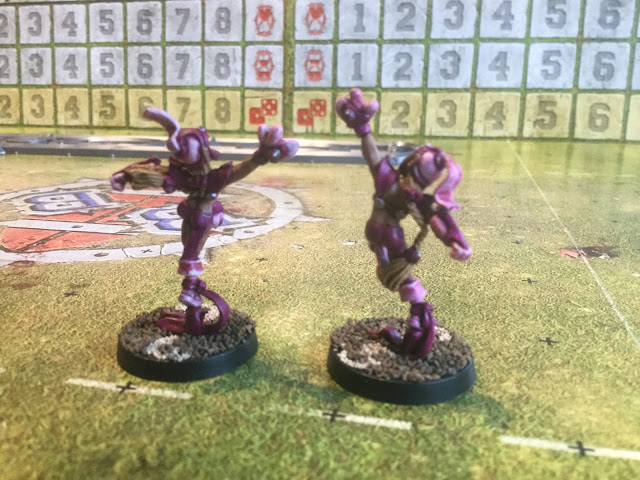 The team blitzers are next.


Number 5 is Lenna "Wrecking Ball" Iarwreck.  Unlike her more ethereal team-mates, Lenna is brutally solid. Most elves don't usually play the running game, casting disdain on the vulgar races who practice the more violent aspects to Blood Bowl. Lenna has no such prejudice and seems to take perverse pleasure in smashing her opponents into the ground before stepping over their prone body and running the football into the end zone.

Number 6, Nithenoel Uridove is the complete opposite of her fellow blitzer.  Related to the team's acrobatic catcher - Alissa Gendove, she shares her cousin's agility and relies on her skills to ghost passed her opponents and score those all important TDs.  That said, she packs one hell of a punch and isn't above cracking a player's jaw as she skips by them with ease... 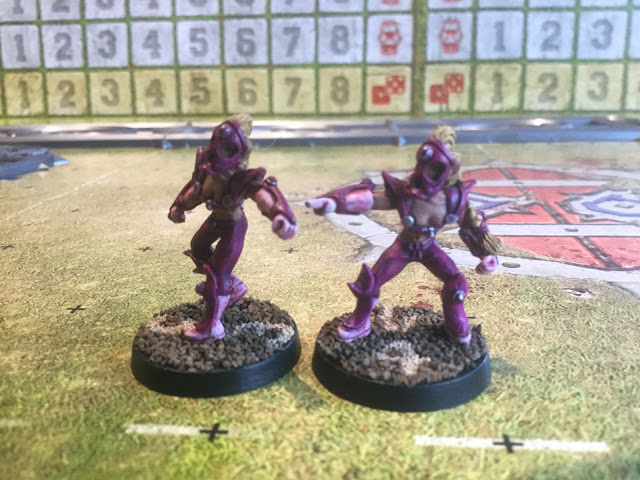 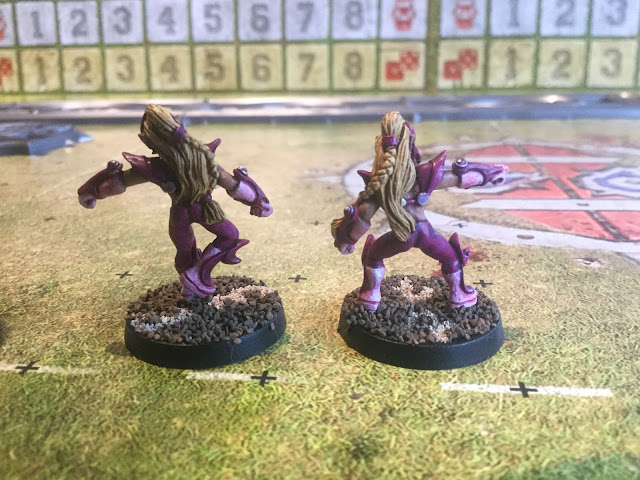 Making up the rest of the team are the Lineman...ahem women.

These elven beauties form the backbone of the team and fulfill those thankless tasks such as holding off rampaging Black Orcs or ganging up on their opponents star players and allowing their own to pass the ball at will. 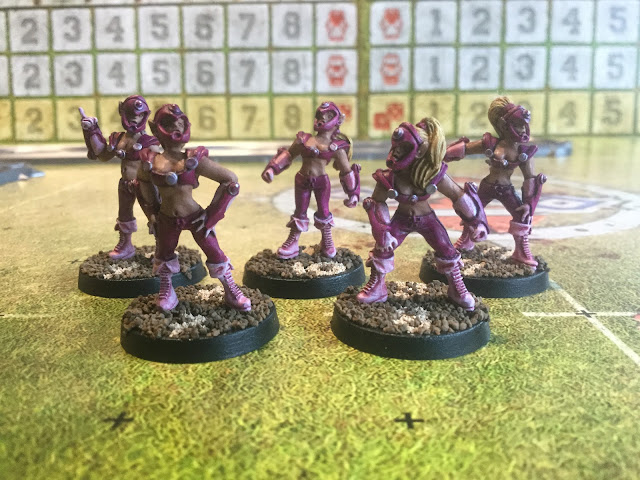 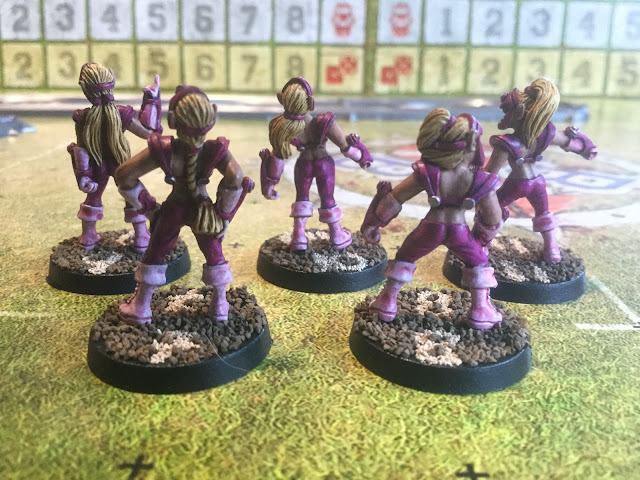 and there you have it, my elven ball players - The Alzuri Angels