Light first, just patches of light and then darkness again....

The sound comes in next – a crackling sound that reminds her of the cosy fires she shared with... darkness again...

More light and even bigger noises as the world turned upside down... She remembers falling... Then the screaming began...

Indistinct sounds that she remembered from before, the sounds of whimpering and the odd mewing noise of the badly hurt.

A shadow falls over her, blocking the flickering light from a nearby fire.

“Is she dead?” A fearful voice asks the question.  She can almost sense the shrug from the shadow. “Who cares, let’s get the fuck out of here”, the shadow sounds exhausted. “What about Tompkins?” the first voice almost whines. The loud crack of a pistol retort echoes around the wreckage of the giant military helicopter.  “What about him?” the shadow almost screams.

Anna kept her eyes tightly closed, waiting for the second pistol shot that would finally release her from the nightmare of the last few days. Long seconds go by, before the sounds of boots crunching through rubble and debris recede into the background before disappearing altogether.

Cautiously the former paramedic opened first one eye, then the other, scanning the immediate area.  With no living soldiers in sight (she carefully avoided looking at the broken remains of the wounded squaddie), she began a thorough assessment of her injuries. Running her fingers through her hair, she found only fragments of glass and rubble, no blood and she was able to turn her head. Chest intact, she was able to take a deep breath without coughing. Her pelvis was able to move without pain and she was able to move her arms without restriction. Moving down, her long bones were straight and had no deformity until she got to her ankles – a clear dislocation of the right ankle. All considering fairly fortunate, she muttered.  Looking around she found a hard rubber window seal from the destroyed chopper and bit down hard, with a practiced hand, she pulled the subluxation and re-seated the injured joint.

Her screams, muffled by the rubber seal, faded away as she gingerly got to her feet and tested the ankle.  It was painful and wouldn’t support her fully but she was sure she could move on it, albeit slowly.  Shuffling over to the broken form of the soldier who had shot at her friend Gobbo, she reached down and pulled the flak jacket off his still warm body and picked up his assault rifle. All around her the low moaning of the walking dead came closer and closer. 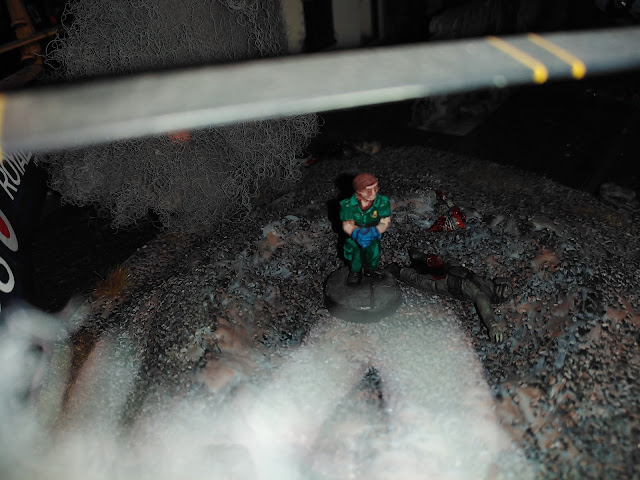 So with Zombtober nearly over and for the first time in a few years I've missed it, well nearly missed it anyway. I haven't painted any new zombies or survivors, simply because I haven't got any!  I've been playing Zombicide Black Plague and even these are all painted. I have bid on Zombicide 2 but that won't land until next year. So instead I've dug out the old ATZ boards and read through all of my previous episodes of this campaign and it's time to play out the next chapter (after well over 18 months of waiting). Here is a link to the ATZ page with the previous chapters for those of you who want to catch up - https://dagobbosgrotto.blogspot.com/p/narratives.html