More offerings from my newest Bushido faction - Clan Ito.  This time let me introduce you to Yuui Ito, one of the awesome Hebi...

Another daughter of Orochi, a ferocious warrior gifted with great prowess in battle and the honour of Orochi’s snake form body. She slithers across the battlefield seeking out the cowards in the shadows and dispatching them in Orochi’s name. Although not of the Ito bloodline Yuui has risen amongst the ranks of the followers of Orochi, a rise that has not gone unnoticed by many Ito, who by birth should outrank her.

Yuui is a cracking model and nice addition to the faction, for just 7 rice you get a 3MS model with all the benefits of being part snake! She has better than average speed at 5, is "light footed" meaning she ignores movement penalties for crossing terrain and is "steady" meaning she cannot be made prone by special attacks.  With her armour (1) and 8 wounds she can take a bit of punishment in combat, even better she can use her Ki feat "grapple" and immobilise her opponent setting them up for a beating by her kin.  With her hebi trait "blood of orochi" I can use her in the "Blessed" Theme and she contributes to the poison pool that allows me to grant poisoned weapons to some of my fighters!  Finally her ki feat "detect" allows her to sniff out those pesky ninjas!  All in all 7 rice well spent....

So the painting of Yuui followed my general theme, with green clothing and lots of gold ringlets around her tail and stuff. I gave her the trademark yellow viper eyes and repeated the colour on her underbelly.  The upper side of her tail I made a dark red to fit my "viper" theme and its not easy to tell from these photos but there is a subtle red pattern mixed in to break up the block colour.  Once again I went for the bases from "Debris of War" this time going with the flagstones to represent the inner temples of the God-Kami - Orochi. 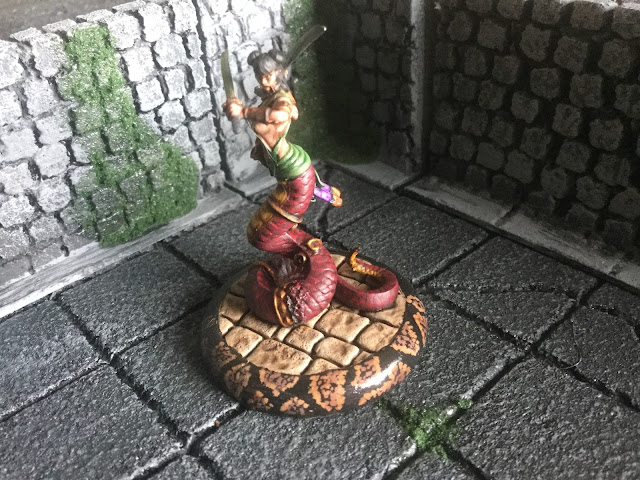 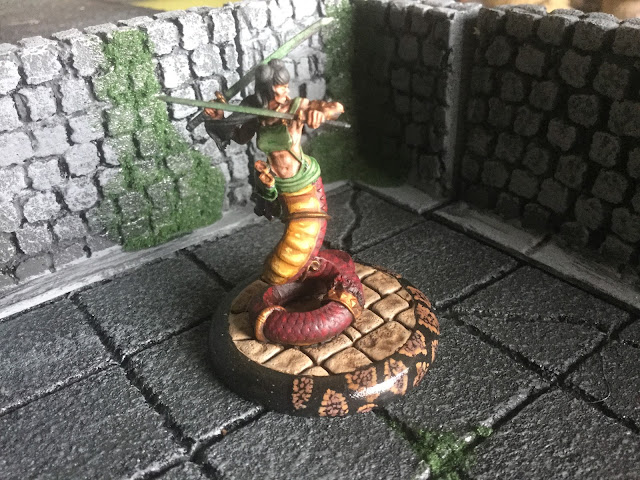 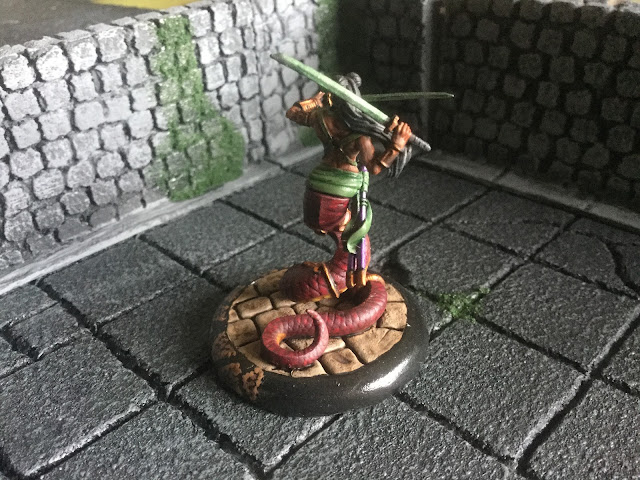