Year of the Snake!

Ok it's not actually the year of the snake, its the rooster to be precise but....

It's time to introduce my newest faction for Bushido - Clan Ito.  This is the official blurb from the GCT Studios -

The Ito have long been the laughing stock of the ruling clans. Never quite able to understand that it is their own flaws which hold their greater ambitions back. Being untrustworthy is synonymous with the Ito in the Jwar Isles; their support of the Shiho’s rise to power followed by their treacherous role in the Dragon Wars against the very same clan, highlights their fickle nature. Now though the Ito on the island of Izu have gone through a transformation, their alliance with an age old and powerful Kami has imbued them with a new found strength. If it was the Kami that caused the snake like changes or whether it has simply exaggerated the Ito’s natural affinity is unknown. What is sure is that the Ito finally have the power to rise against the other clans and avenge the mockery and mistreatment they have suffered. Will this venomous clan prove to be one dose of poison too much for the Jwar Isles?

So we have a human clan that have spent too long in the jungles of Izu, found a snake like deity/kami to worship and have returned with a shed load of snakey goodness, why oh why has it taken me this long to get stuck into this faction.  Well the simple truth is I bought them for Rich last year, but as he has made no move to paint them and GCT keep releasing the coolest models I cracked and splurged at Salute! this year. Over the next few weeks you will be seeing some of the amazing Hebi I've bought to supplement my faction but I'm gonna start, quite aptly with the "starter set".

Sadly I didn't get these quick enough to participate in the "Starter Set Wars" knockout comp between Damon and I but it will feature in the next time round.  One last thing before I delve in to the set, at Broadside I saw the most amazing resin bases made by a chap who has set up a local company - Debris of War.  Now, for my Bushido models I have made all of the bases and really enjoyed the process but this time I couldn't resist.  I know they aren't jungle bases but even the snake clan live indoors, so I've purchased the Japanese wooden flooring bases as they were just so pretty. Anyway to the set then....

We'll start with a scion of Clan Ito - Itsunagi Ito, here is his blurb...

Ito Itsunagi is the eldest of the heirs to the Ito clan. His training has been second to none and his skill at arms is quite astounding. A brutal and coldblooded killer, his only downfall is his arrogance, mocking opponents with his lack of armour.

One of my favourite models of the faction Itsunagi is simply a killer in melee.  His speed is phenomenal, with "Cobra Strike" ki feat he can attack first and reroll a low dice with his "Martial Prowess". "Do Kote" and "Umbrella Block" makes him hard to hit in return.  His 4 dice in melee give you loads of options whether to go on the offensive or tie up an opponent by going defensive, especially as he has "Indomitable" meaning he doesn't easily get outnumbered.  This guy ticks loads of boxes - unfortunately that means he comes with the price tag to match at 13 rice (ouch).  Still he certainly stands out and offers a lot of toys for a warband to play with.


Paint wise, I moved away from the official paint job as always and offered up a slightly different theme for my warband.  Firstly I used theme colours that run through all of the minis in the set and they will feature through all of the faction.  The first being that I'm not going to go with the traditional green snake skin look.  All of my sneaky snakes will be deadly vipers, which can mean only one colour - RED!!!  I also wanted all of my minis to have been effected by the worship of the kami Orachi, which means all of them will have at least yellow serpent eyes.  Green will be the main clothing colour definitely, offset by yellow.  Any snake skin will be in the red as stated and the main samurai and shisai will have res serpent scales somewhere on their body - in Itsunagi's case his back and shoulders.  Lastly the bases will have a different "Line of Sight" markings which I'm really pleased with and is the only snake skin not in red, I did it in python browns as they are more neutral colours. Finally I gave the lips of the bases a coat of gloss varnish as it gives it that shiny look that makes snakes look slimy even when they aren't. 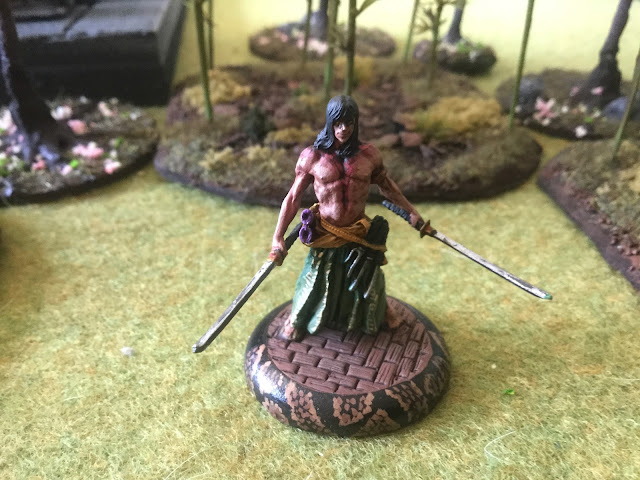 Next we have the Hebimiman - Akimoto, here's what GCT say about him...

How the transformation will take hold no one can be sure, Akimoto is taking on the very image of Orochi. In the heat of the battle his allies claim he transforms further, this claim is supported by the opponents that flee in terror in the face of his onslaught.

This dude sums up the set for me - half man/half snake, Akimoto is a great looking model despite the weird left arm position.  Armed with Tanbo or short sticks he looks like he's playing the drums, in fact my buddy Matt from "Sarcophagi" has converted him to playing a drum which looks fantastic.  Akimoto is a "Fear" causing dude making it difficult for enemies to charge him or causing them to lose activations and dropping dice in melee.  Which is a good thing as he has only limited combat potential.  Still he can gang up on an opponent with another more melee suited friend and really change the game.  Not only that but with his "Blood of Orachi" trait he can poison the weapons of friendly models at the beginning of each turn!

Painting for him then had to be red viper skin, just had to be! in fact he was the first model I painted in the faction and was the reason I chose the paint scheme. 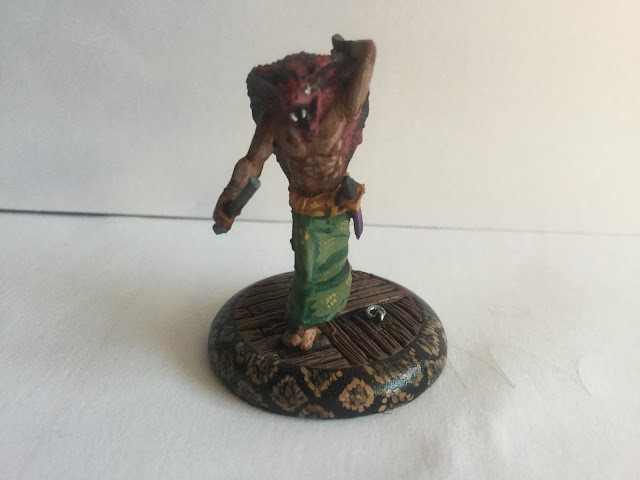 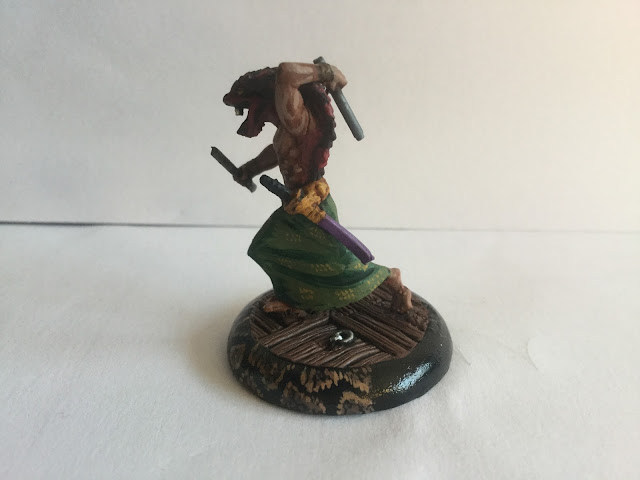 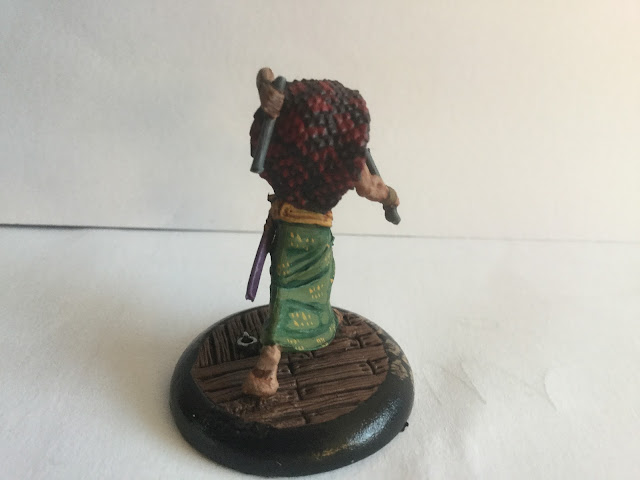 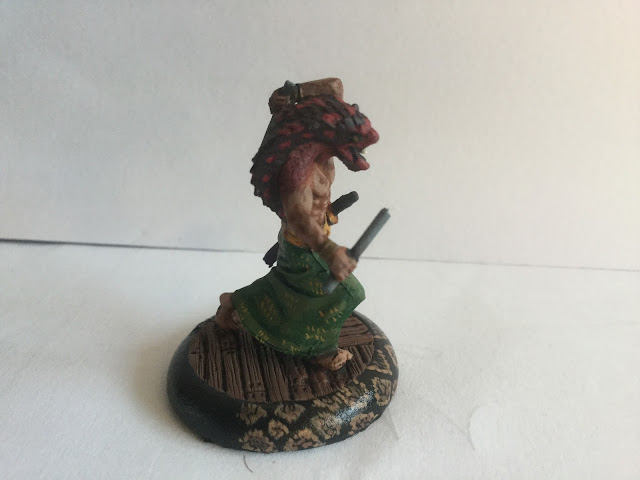 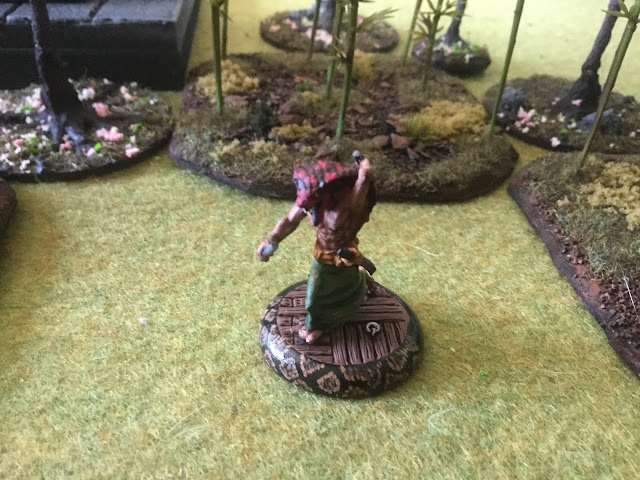 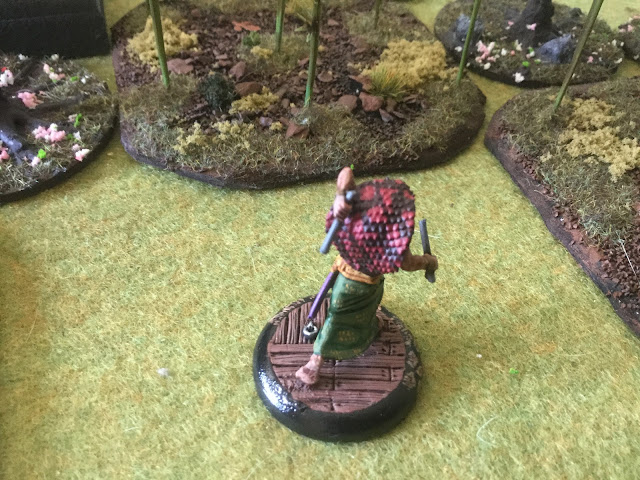 Next we have Sakura, a Shisai or priestess of the cult of Orachi....

A priestess of Orochi, she has dedicated her life to the snake kami and has been favoured by beginning the transformation. With the merest of looks Sakura can corrupt a man, turning the blood running through his veins into poison.

Sakura offers up some much needed support for the clan, with her "Blood of Orochi" she adds to Akimoto's poison pool.  It's her ki feats where she shines though with "Pyschic Venom" poisoning enemies at distance and "Protect the Mother" poisoning them in melee - Love it!  she is weak in melee so best to use her in the back of the field protected by one of the last two of the band....

Painting wise, she follows the theme colours and has started to develop scales so she was subject to the red viper treatment.  She also is covered in little vipers so they also were painted red. 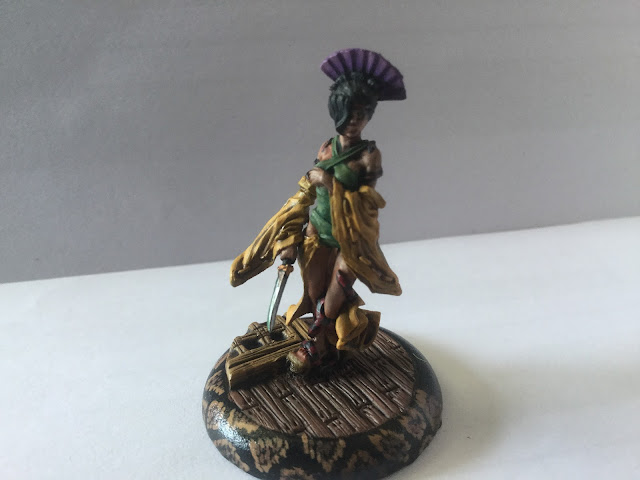 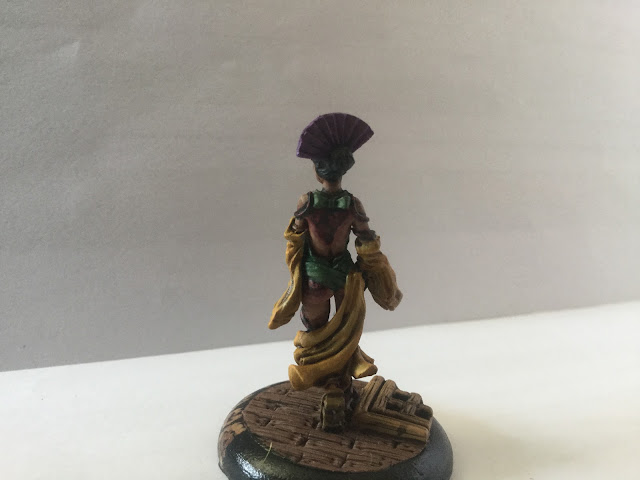 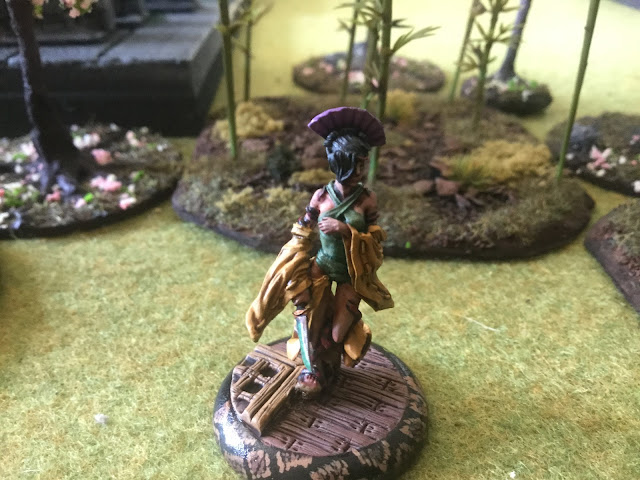 The last two models are Chiyo and the Temple Bushi, both fairly standard "grunts" in that they are low cost basic characters.  Chiyo is slightly upgraded model with "Leap" and "Jump Up" increasing her cost by one rice.  the Temple Bushi can be upgraded with the introduction of the card pack and it's worth taking, but in the standard starter set his best role is to bodyguard Sakura.  Chiyo is useful enough in taking objectives and can run with Itsunagi or Akimoto taking out low level minis.

Chiyo has distinguished herself further from her fellow Temple Bushi, she quickly mastered the art of the Asp Strike and her spirit and determination to return to the fray when knocked down has been noted by her superiors.

The Temple Bushi are chosen from the ranks of the Ito’s ashigaru for skill and prowess shown on the battlefield. Only the best are selected to guard the temple of Orochi and it is considered a great honour to be chosen.

Painting, I have kept with the standard themes.  Each of them has a snake skin wrap around their torso and pattern on their kimono, just to provide a little relief to the block colours and give the miniature some personality. 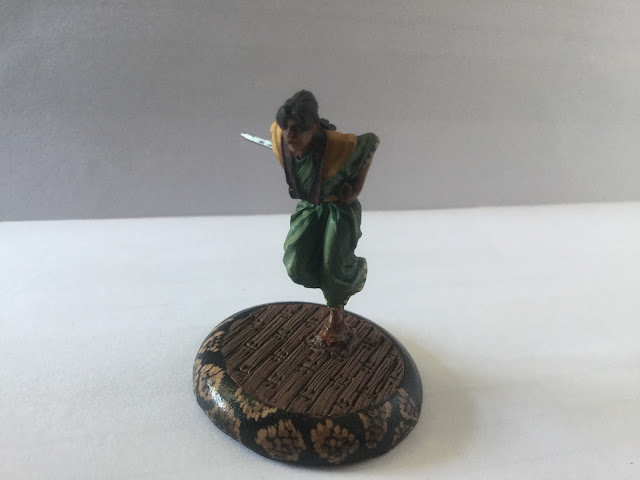 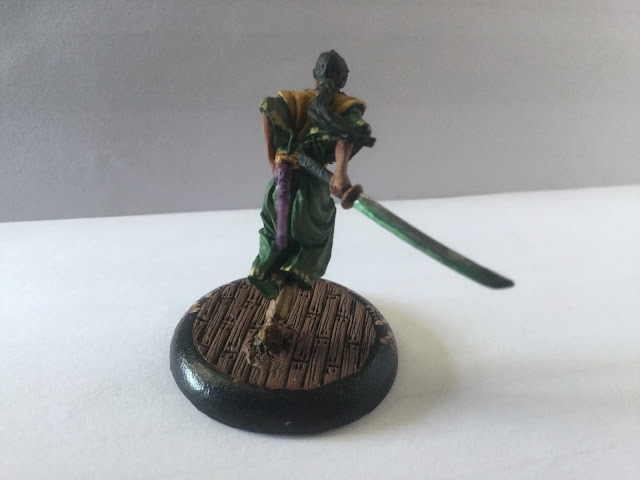 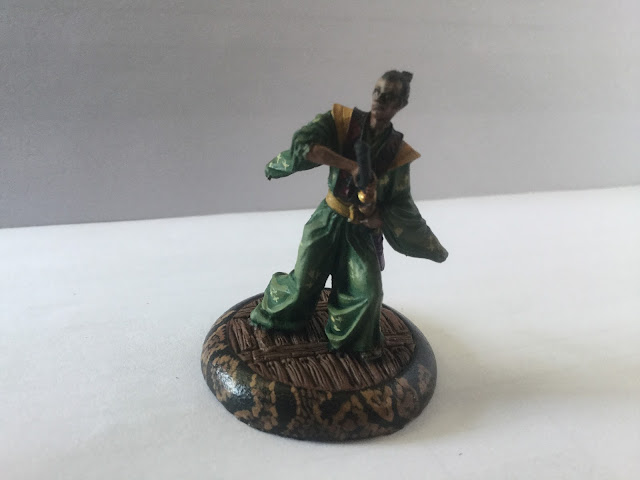 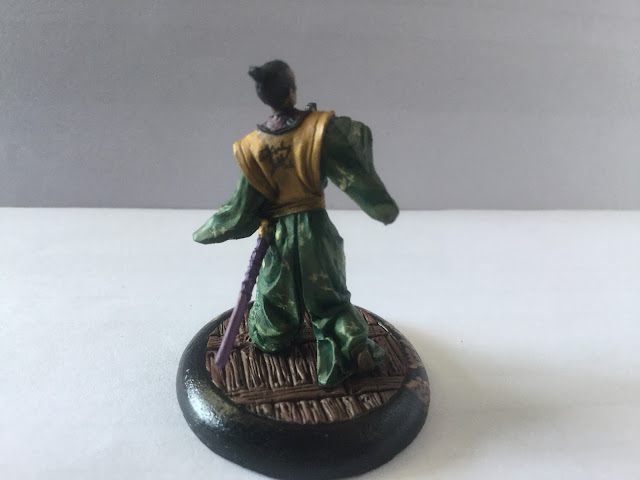 So that's the start of a very interesting and beautiful looking faction, next up will be the very gorgeous looking "Hebi" miniatures and you'll soon see why I 'm so excited by this faction! 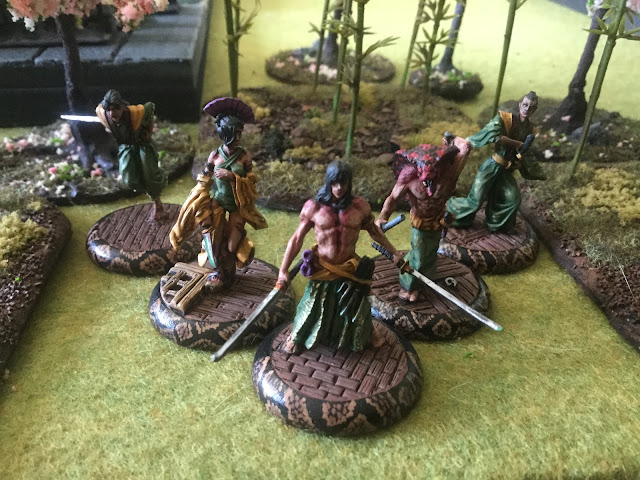 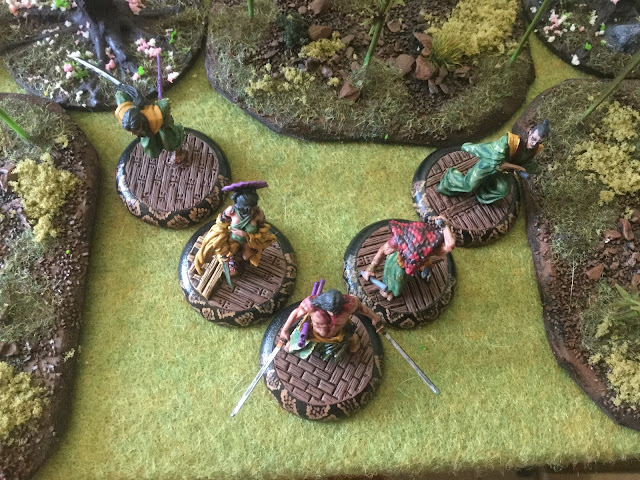 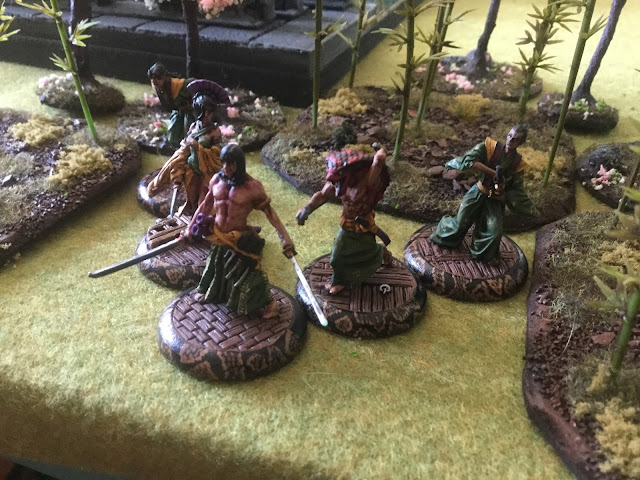 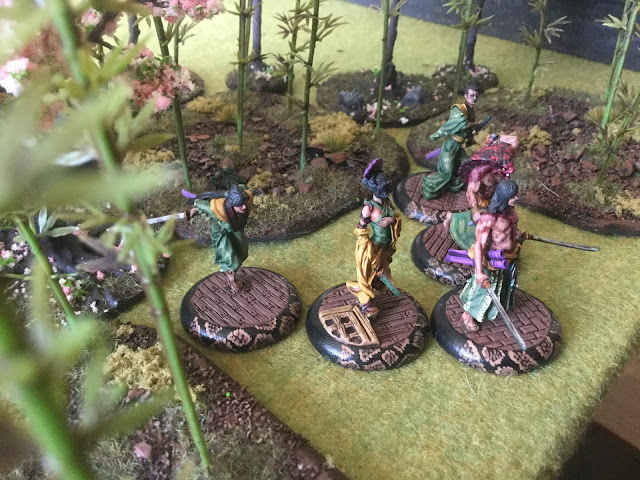