A rather odd title I'm sure you think, but there is a reason I chose such obscurity and that is to do with the new faction that has swooped into da Grotto further fueling my Bushido addiction - the Tengu Descension.

A little clarification then? Well according to Japanese folklore the translation for Tengu is literally Heavenly Dog.  I'll just be lazy and post the Wikipedia entry, which I found very interesting and provided the springboard for my research into this group of supernatural beings. 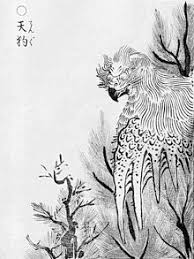 Tengu (天狗?, "heavenly dog") are a type of legendary creature found in Japanese folk religion and are also considered a type of Shinto god (kami) or yōkai (supernatural beings). Although they take their name from a dog-like Chinese demon (Tiangou), the tengu were originally thought to take the forms of birds of prey, and they are traditionally depicted with both human and avian characteristics. The earliest tengu were pictured with beaks, but this feature has often been humanized as an unnaturally long nose, which today is widely considered the tengu's defining characteristic in the popular imagination. 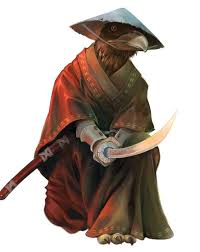 Buddhism long held that the tengu were disruptive demons and harbingers of war. Their image gradually softened, however, into one of protective, if still dangerous, spirits of the mountains and forests. Tengu are associated with the ascetic practice of Shugendō, and they are usually depicted in the garb of its followers, the yamabushi.

There is loads of great stories and information held on the inter-webs regarding this fascinating group of beings, but I can't do all the heavy lifting for you so I urge you to research them yourselves, you will not regret it.  For Bushido purposes, the guys at GCT have gone down the more warrior like stories of the Tengu, how they taught martial arts to humans and even allied themselves to the human tribes that inhabit the mountains that the Tengu have made their eyrie like homes in.

Now I've already given you a teaser post regarding the giant bird-like Samurai - Buzenbo, here is the starter set that will form the core of my emerging faction.

For countless cycles the elders of the mountain have watched and waited, their quiet vigil in the high places of the world unbroken. Silently they have over seen the rise and fall of innumerable clans, the petty squabbles of mortals bare no relevance to their goal. Gifted with generations of knowledge passed down through the written teachings of the Karasu Shugenja and oral histories of the Koroko Shisai the Tengu hold the secrets of the world in the their high homes.
Now stirred into action, one can only imagine the danger that looms that has rustled the Tengu to war.
So that's the official line here's my breakdown of the miniatures...
First we have Kotenbo
The Haiatake are the third of the warrior caste of the Tengu. Strong, loyal and fearsome fighters, dedicated to the pursuit of mastery of martial disciplines. Their traditional weapon the oversized Katana which they wield either single or double handed with equal skill.

Kotenbo will be trusted to hold the centre of the board, urging other Tengu Bushi on with his "Command" trait and then wading in with is huge katana, which when combined with his "Hack" ki feat can easily carve through the toughest of opponents.  "Battle Hardened" and "Armour (3)" will mean that he will present a real obstacle.

Faction colours wise, I've gone for a golden yellow and black combo with the Tengu armour plates being a bronze/golden metallic colour that I made mixing GW's "mournfang brown" and "shining gold". Feathers for the birdmen are a mix of Vallejo's "Orange Brown" and "Saddle Brown".  Once all of the base colours were blocked in I rather uncharacteristically chose not to shade each individual colour with a corresponding ink shade but instead decided to wash the whole miniature in Army Painter "Strong tone".  This proved to be a daunting prospect for me, but I think it lends a natural tone to the whole range of miniatures. 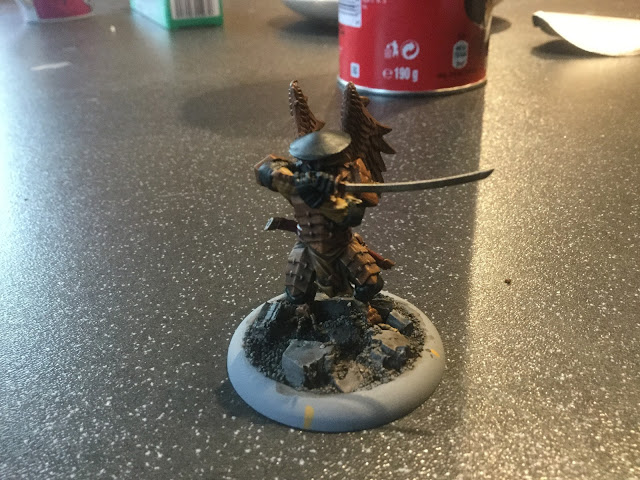 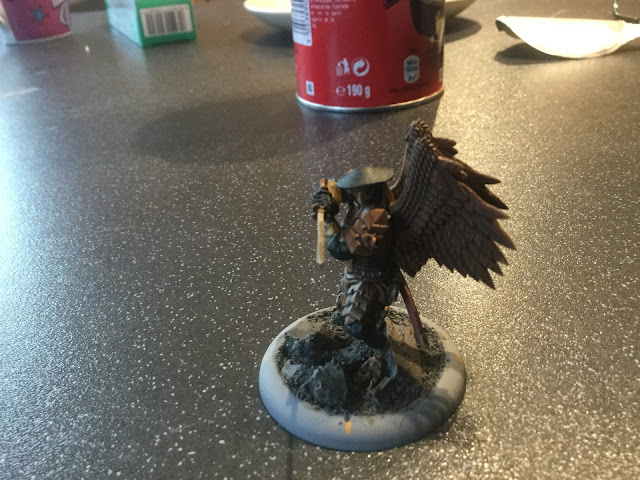 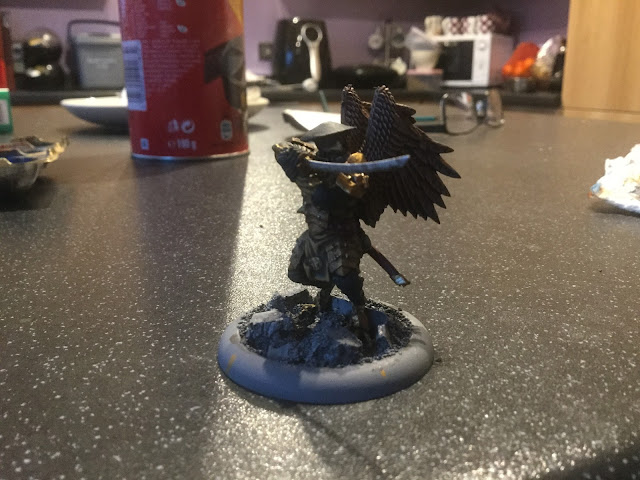 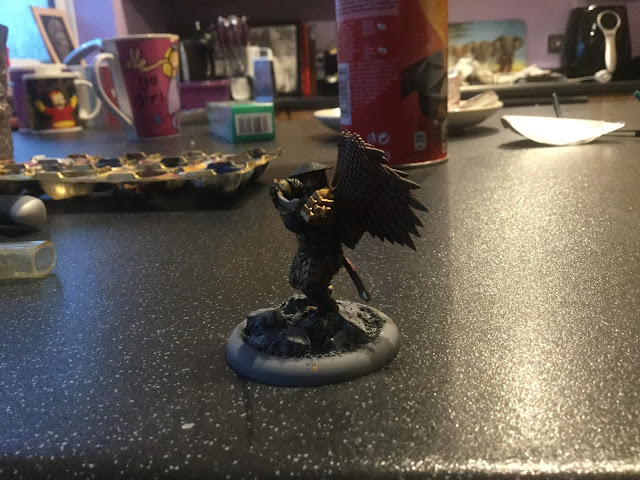 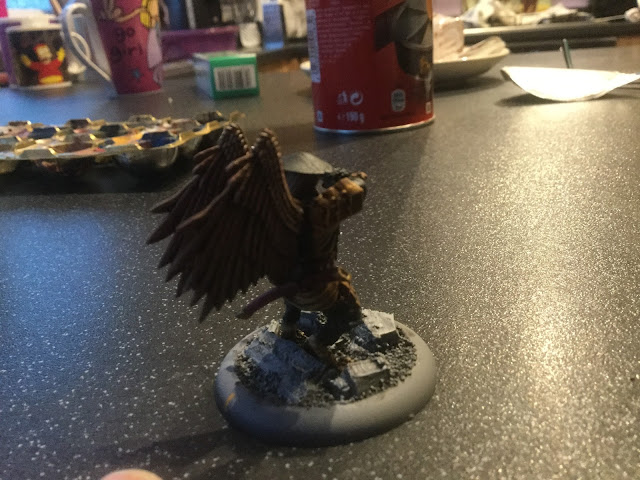 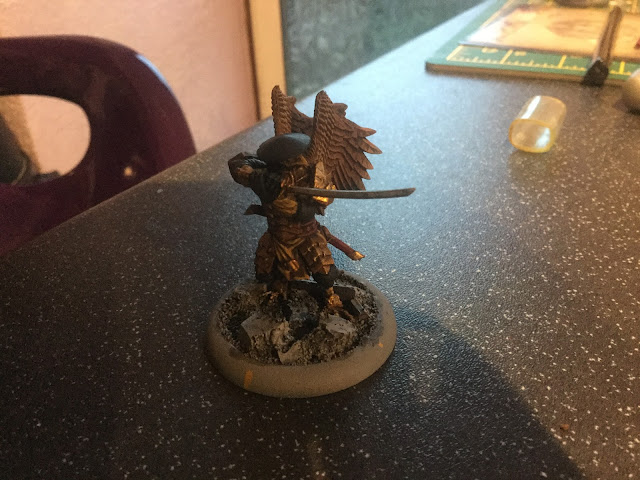 Next up Tarobo..
The Blue Gale scouts are comprised of the quickest and most nimble of the Suzume. Tarobo as the fastest amongst them, ducking and dashing from combat, foes swinging at empty air as the bushi severs limbs with the Blue Gale signature short blade. Always accompanied by a number of wild hunting birds that create a network of eyes for identifying any threat and swarming to distract them.

Tarobo will almost certainly be in every warband that I put together for the Tengu as he has the ability to "Stun" an opponent each turn, is able to "Scout" meaning he deploys further up the table or he can "Flank" and deploy on a neutral table edge from the 2nd turn on (on a dice roll). Armed with a bow and the "Camouflage" trait he can sit behind cover and snipe or "Dash" forward to capture objectives.

Next we have Zenkibo...
A legend amongst the Zephyr guard, Zenkibo is a nimble and ruthless fighter. Swift on the wing and skilled in the Suzume yari, he makes a strong addition to any Tengu warband.

Zenkibo is a reasonably able fighter with "Dodge", "Armour" and "First Strike" and his ki feat "Precision Strike" he's a handful for mid and low level characters with "Fly" he can leap opponents and turn their backs to other Tengu to finish the job!

On to the Tengu's human allies from the Hill Tribes we have Talriktug...
Taliriktug is as strong and rugged as the mountains he calls home. With his ancestral axe, crafted to last generations, none can resist his wide and arcing blows, felling opponents unable to the block his furious onslaught.

Taliriktug has a great combination of "Toughness" and "Armour" which means he will be a swine to remove off the board, add this to his offensive attributes "Cleave" and +1 damage from his enormous axe and he will be a handful.

Last but by no means least we have Nuniq....
An amazing hunter and tracker, Nuniq knows the mountains she calls home better than any other. Enemies to the tribes must tread carefully if they don’t want to lose men to the hidden traps and snares, obvious to the tribes people but undetectable to outsiders. Her eyes miss nothing, whether spotting prey, animal or human.

Nuniq offers a load of defensive and scouting goodies that should prove a handful and considering she is only 6 rice she is cheap enough to appear often in a warband.  "Snare" will haress and slow opponents down, wasting activations and disrupting my opponents plans.
so here is the finished pieces and a group shot.... 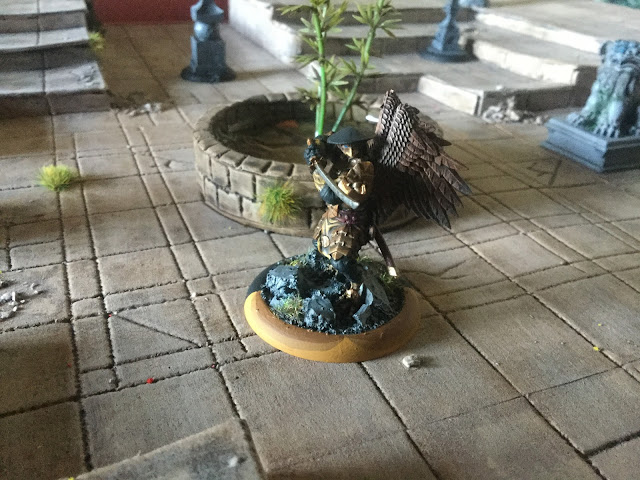 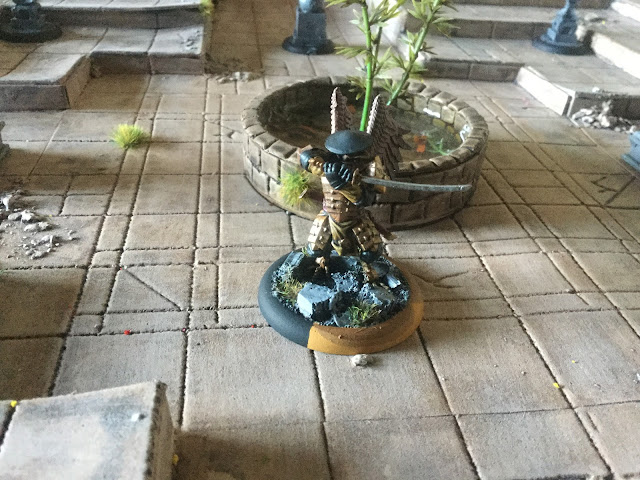 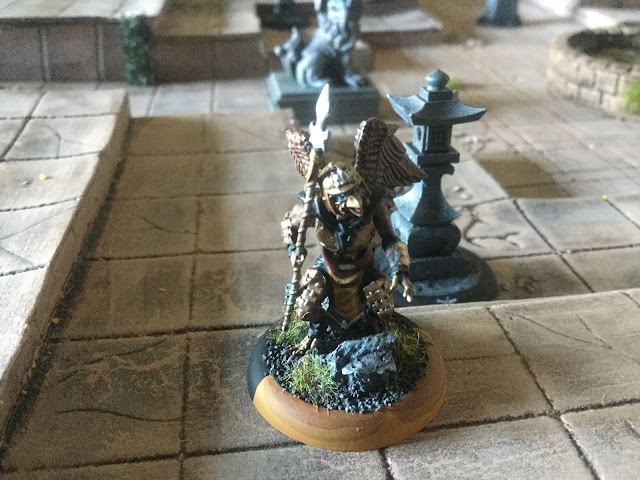 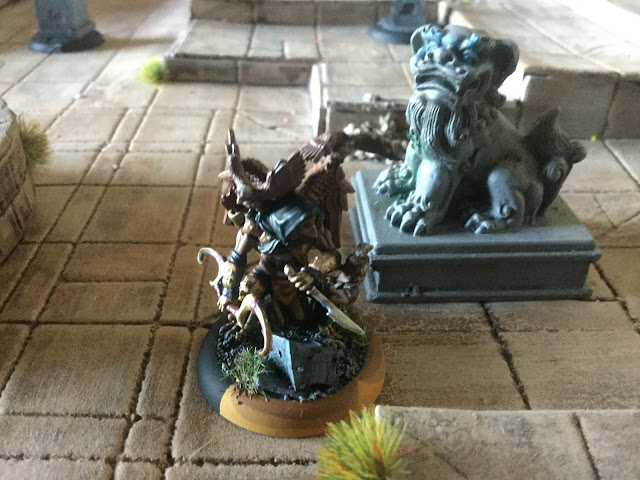 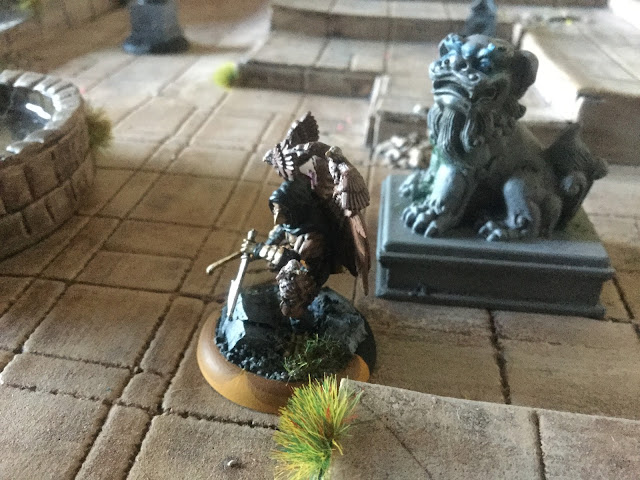 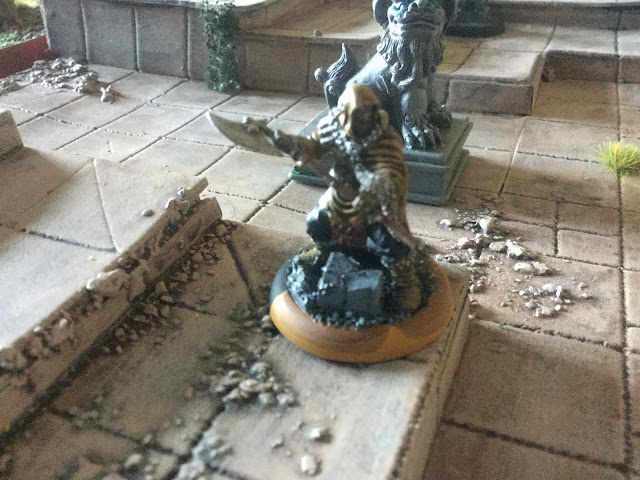 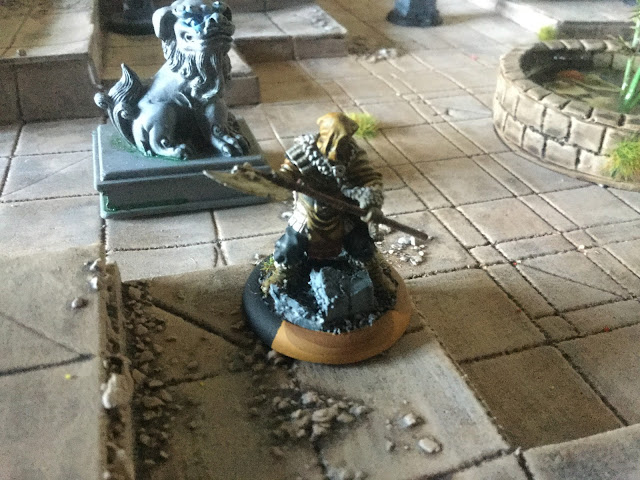 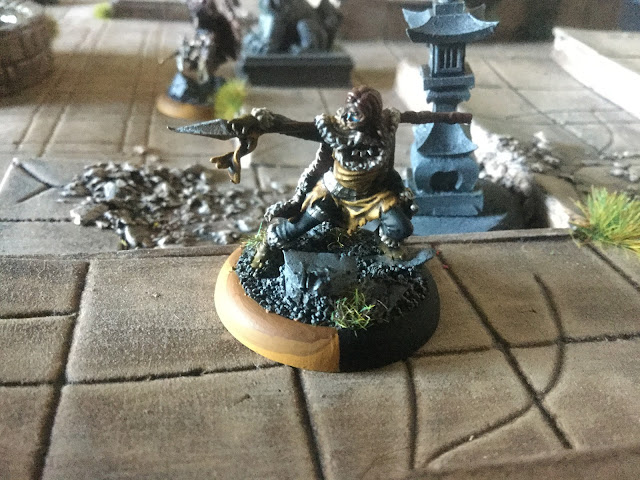 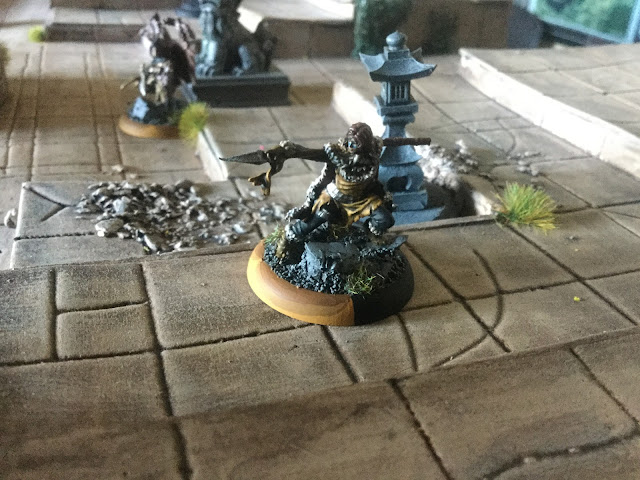 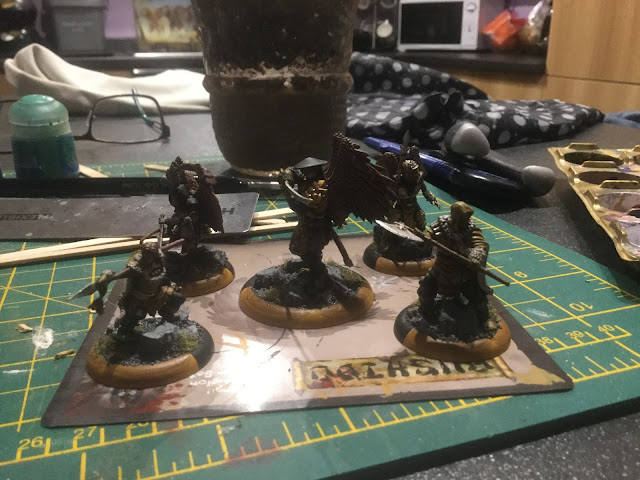 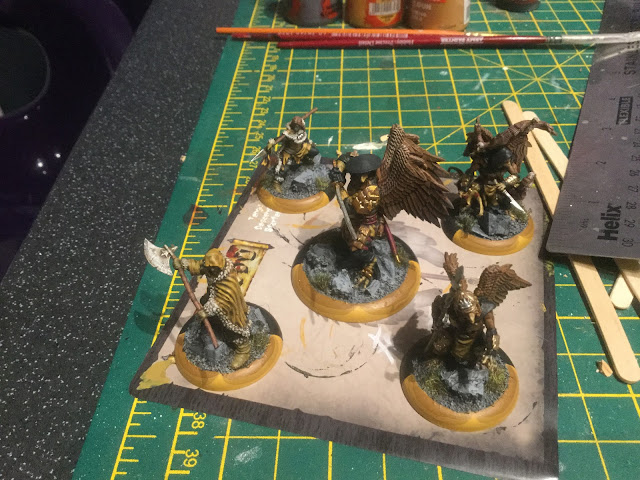 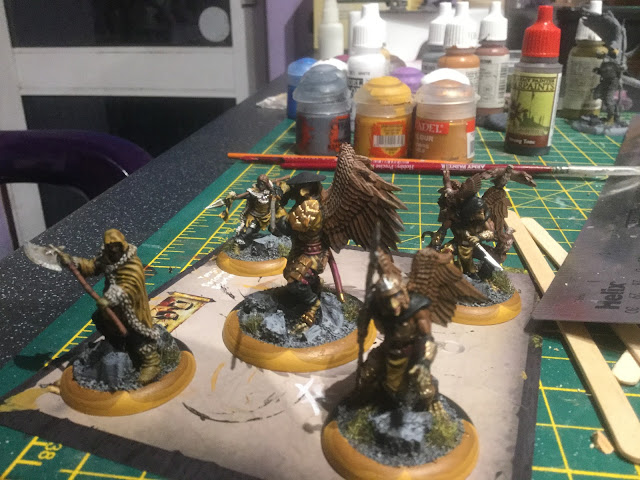 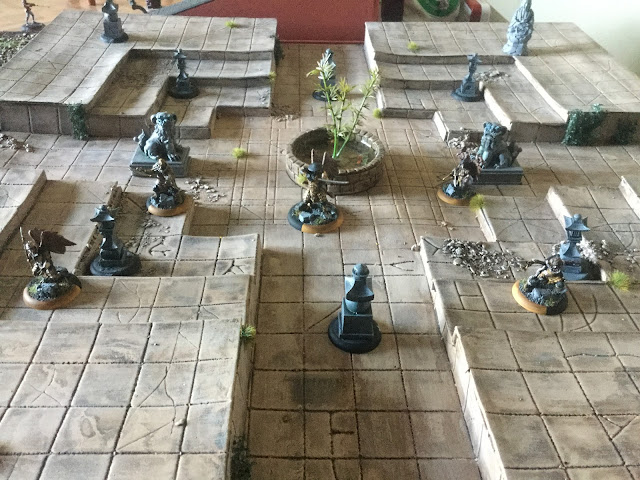 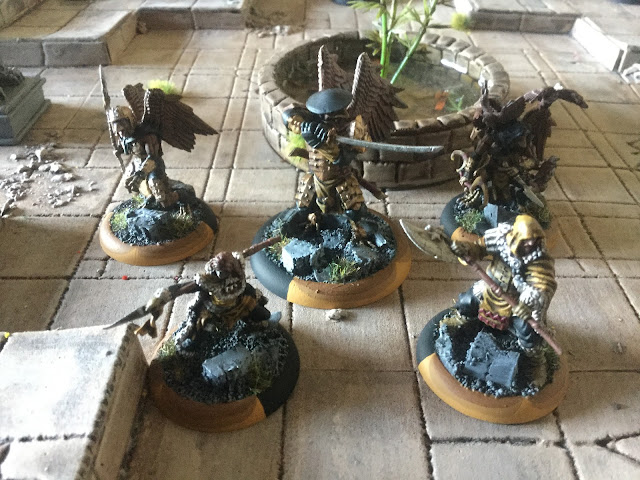 So there you have it my first 5 miniatures for the Tengu Descension, I have a few more yet and there will definitely be a spending spree at Salute in April to boost their ranks.