Over the next few weeks/months there will be more Bushido (no groans from the cheap seats please), no my love for this game hasn't diminished at all, if anything its gotten worse! Two new factions will be coming into da Grotto over the xmas period thanks to some canny Black Friday shenanigans. With 40% off a lot of them and 20% off the rest I couldn't resist bulking out my existing factions and starting some new ones (that I'd always intended on getting anyway!).  As is always the case, the ever suffering Mrs Gobbo stole the purchases away and is giving them back to me as gifts.....however this time I managed to blag a blister pack to be getting on with while I'm waiting.  Sadly its not a starter set but it is one of the newbies.

The first new faction and the one I'm going to introduce today is the Silvermoon Trade Syndicate, a shadowy criminal organisation that has a stranglehold on trade in the Jwar Isles - think a cross between the Japanese Yakuza and the Hong Kong Tongs!  This is the official blurb from the GCT website.

The thriving port of Jima is the beating heart of the Silvermoon Trade Syndicate’s operations. For generations the merchants of the syndicate have been the trade life blood of the Jwar isles. From the great gambling halls, where fortunes are won or lost, on the roll of a single dice or the draw of a card. A bustling and bountiful harbour brimming with exotic goods and rare delights. Famed arenas where colossal Jumo warriors clash in a brutal dance, or an array of fighting beasts struggle in a battle to the death. Water houses where ones wildest fantasies can become reality with the touch of a Rose. Their power lies not the in military might of the Ito, Takashi or Minimoto but in the stranglehold they have on trade. And not only the trade of goods, but of the secrets and whispers of even the most pious. Some would liken the Silvermoon to the flip of a coin. Pay your debts and you come up in the sun with the fortunes smiling, cross or try to cheat them and you’ll be in the dark and covered in dirt.

So onto my first painted miniature for this faction.  Let me introduce Dafukaia and the Kami of the Burning Anger.  here's his introduction from the website.

Not all those children raised in the monasteries and taught the teachings of Subarashi Baransu are able to complete their training, return to their homes and continue the cycle that has been in place since the beginning of memory. Dakufaia was a promising student, however the gnawing rage that burns inside him stoked by an unknown trauma could not be dowsed by the secrets of the temple. Despite many attempts to help and guide the boy, the masters could not risk letting him continue his training such was the ferocity of his temper.

I love this guy, he's an awesome fighter with 4 dice in melee, with Brutal and able to burst into a living flame with his Ki feats.  He will be, in combination with his kami able to take on the majority of my opponents best and brightest, at 10 rice he's costly but he does come with....

The Kami of the Burning Rage, this kami is awesome and adds loads of bonuses to members of my faction who start a turn in base to base contact with it.  Its also quick and not too shabby in melee itself.

So to my painting of this bad boy ex monk and his walking torch.  Simple undercoats to start with, white for Dafukaia and yellow for the Kami.  I then needed to paint Dafukaia up in my usual way choosing red as my faction colour, red being considered lucky in many oriental cultures.  I left out the flames until I'd done the rest of the mini and then I could paint his flames and the kami together. So here's a little tutorial on how I paint flames, i'm sure there are other better ways but this way is quite effective imho.  The key is to remember where the source of ignition is.  For Dafukaia it is the palm of his hands, for the kami I decided the part of it that touches the ground.  Now GCT have decided that the source of ignition is the middle of the kami which makes sense but it also makes for a difficult, intricate paint job which I just wasn't up to.  Then the brightest and lightest colours are always closest to the ignition source. 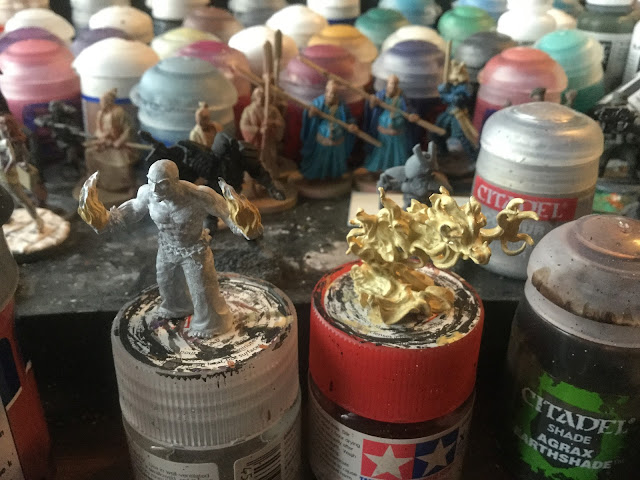 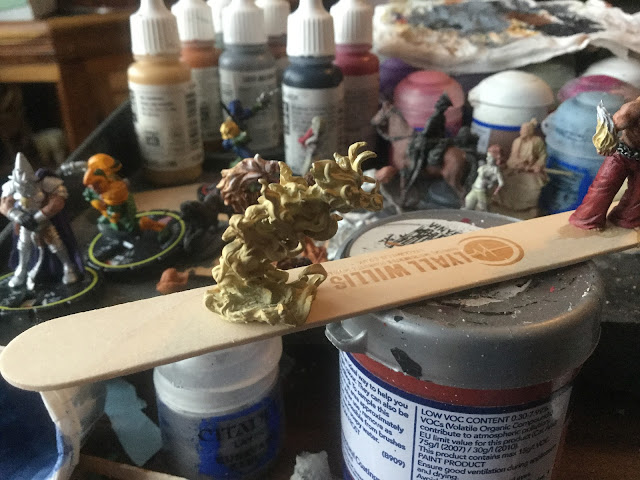 After this I started painting the flame effects, first I painted the base of the flames in his hands the same colour as the undercoat of the kami. 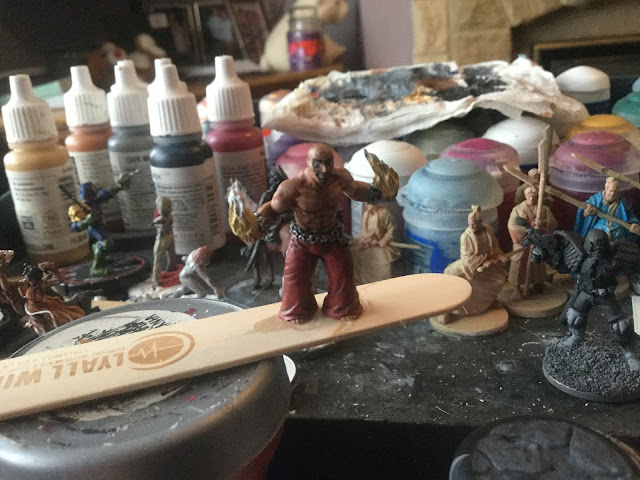 I then painted and orange/brown colour in the middle. 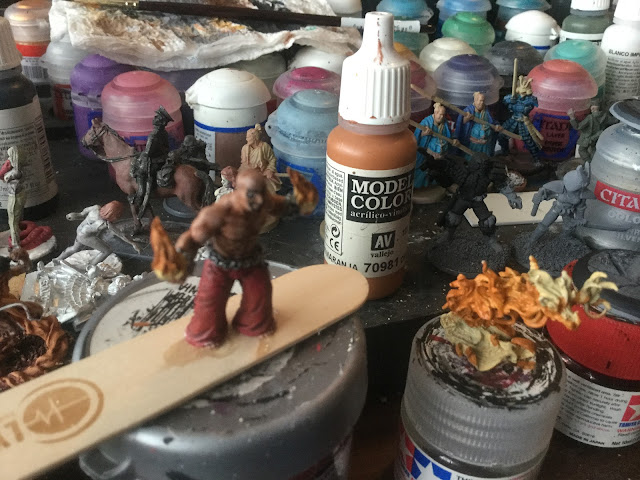 and finally a red at the top. 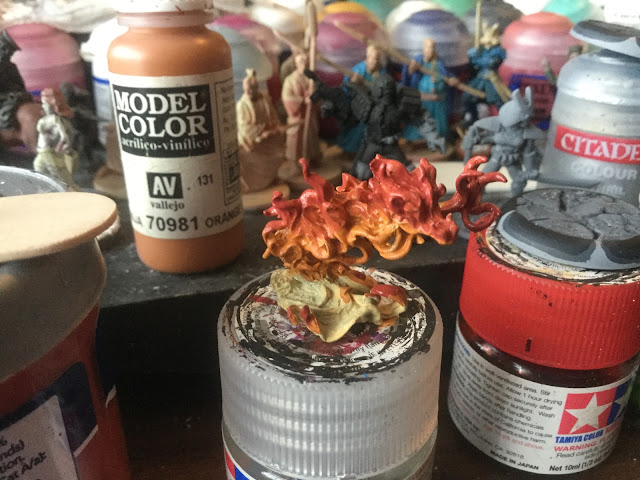 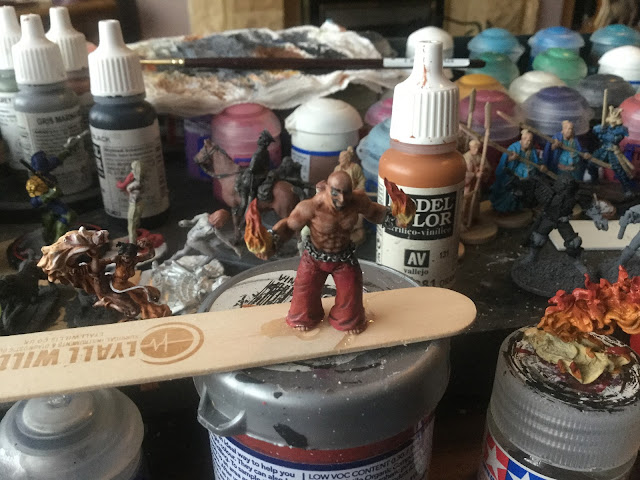 I then gave them a heavy washing of red ink. 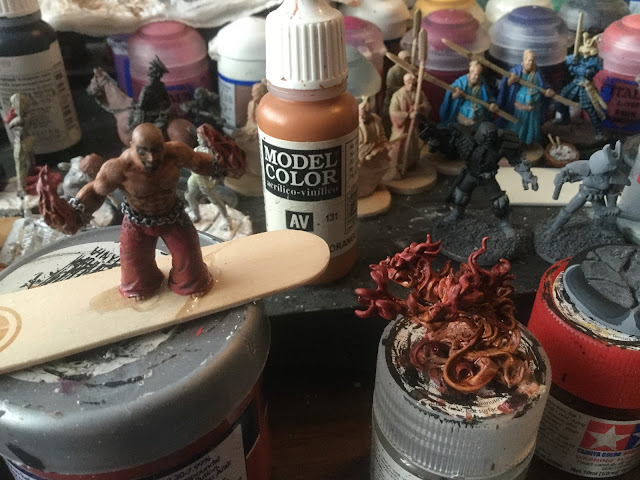 while that was still drying I started the highlights, which are done slightly differently to the norm in the fact that you highlight the darker colours with the lighter ones, by which I mean the red gets highlighted with the orange, the orange with the yellow and the yellow with white.  I then used white highlights throughout the rest of the mini. 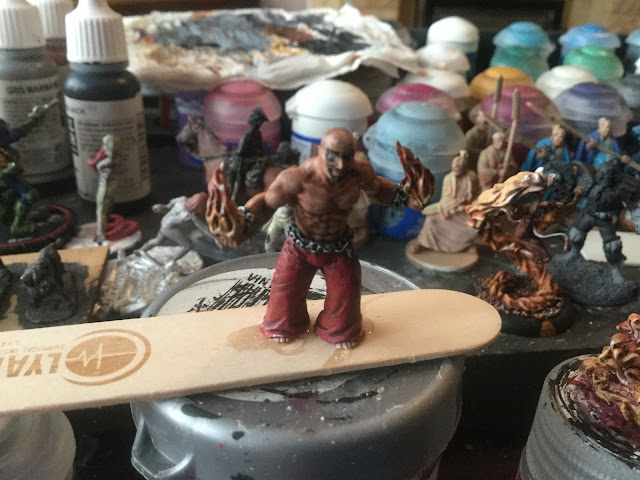 it worked really well for Dafukaia and moderately well in the kami, although it might be a little messy. 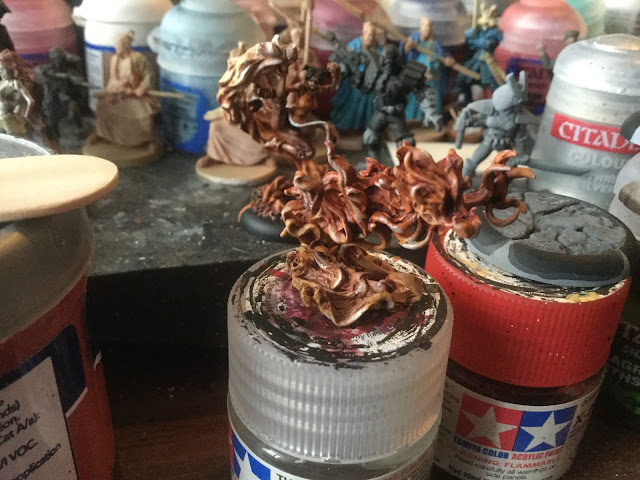 With the flames done it was time for Dafukaia's Yakuza like tattoos, which will be a theme that will run through my faction.  There is a great tutorial on the GCT webite for tattoos but the bones of it are adding your flesh tone to whichever colour you are using and to use a purple or green instead of black for an outline.  I did some tats on my Jung, they were pretty basic though so I thought I would be a little more adventurous.  So first it was purple bird of prey on the back as well as random kanji and a giant snake on his chest. 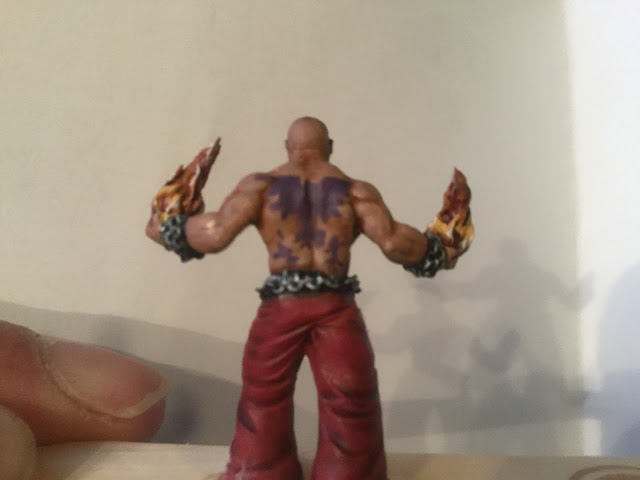 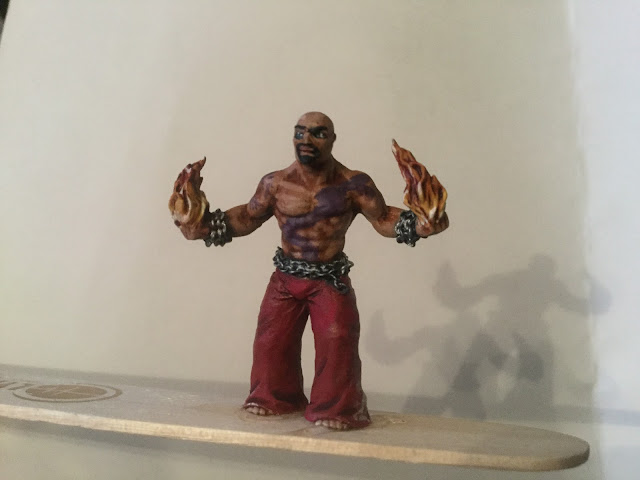 then a little colour 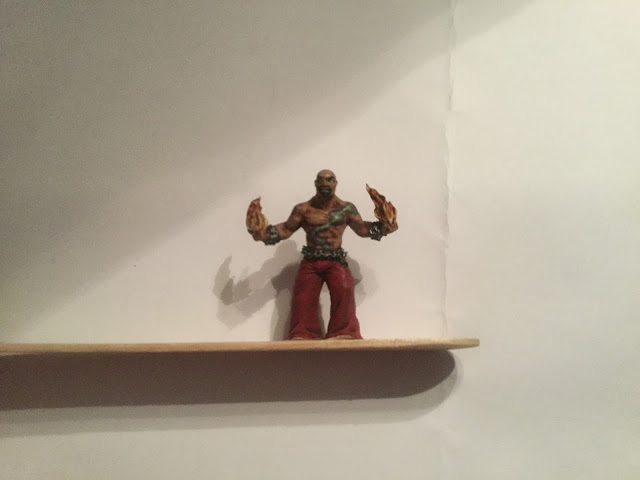 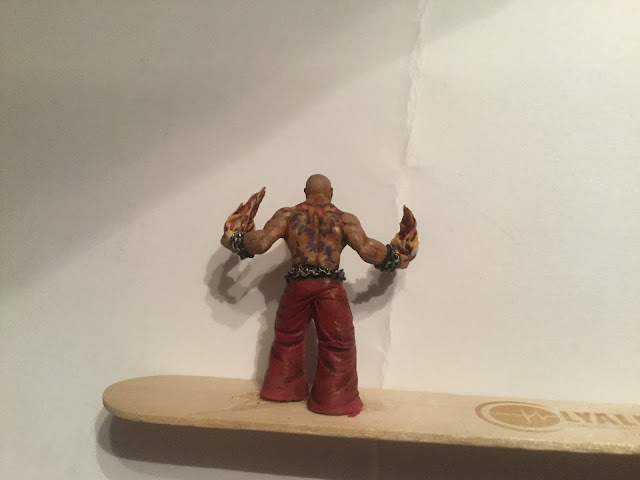 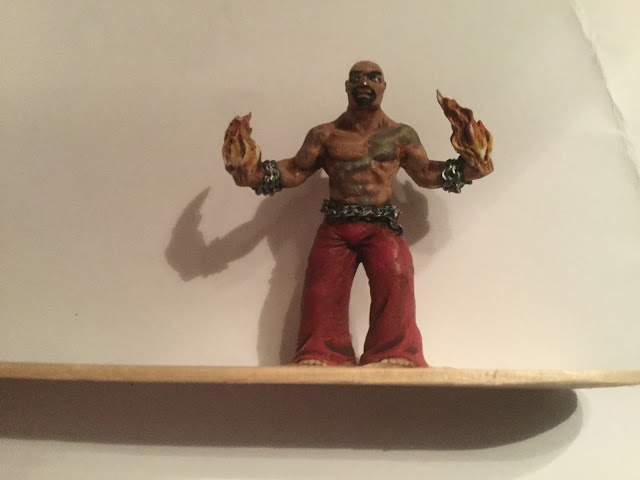 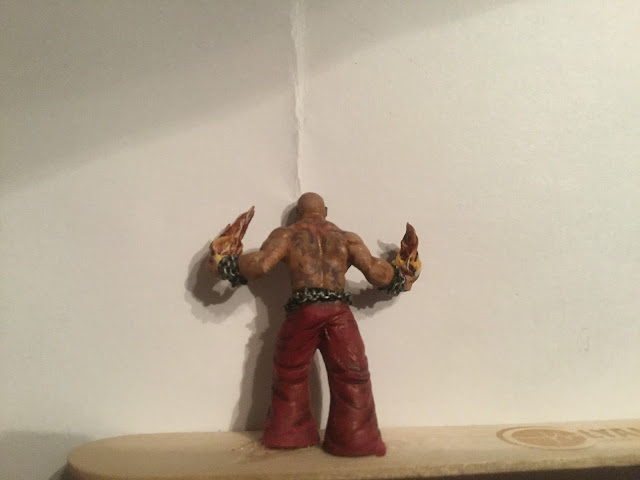 All of my Bushido minis have faction specific bases that I have made especially, this one is going to be no different.  I want the bases to reflect the streetwise nature of my gangsters so it's going to be broken streets and litter strewn alleyways.  With this in mind I took some filler and came up with these.... 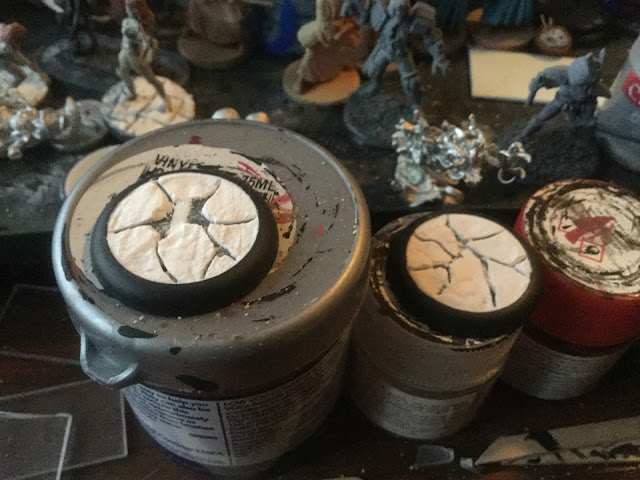 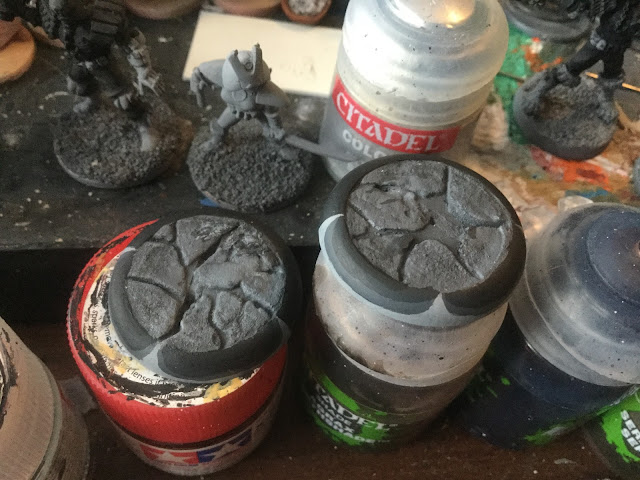 as you can see I've also painted the LoS markers on the bases differently, as regular readers of this blog know I've been struggling to come up with an aesthetically pleasing way of marking the all important LoS on the rim of the base.  I have tried plain white lines, faction coloured triangle/stripe and a blended style and then I saw what Damon did for his KKZ ninja faction and basically stole it as I liked it so much. It is in fact a combination of the triangle and blended techniques and I think it looks excellent!  I also added a crumpled list of debtors on the base of Dafukaia, I made it from a piece of paper stained with cold tea and then with some kanji written on it. 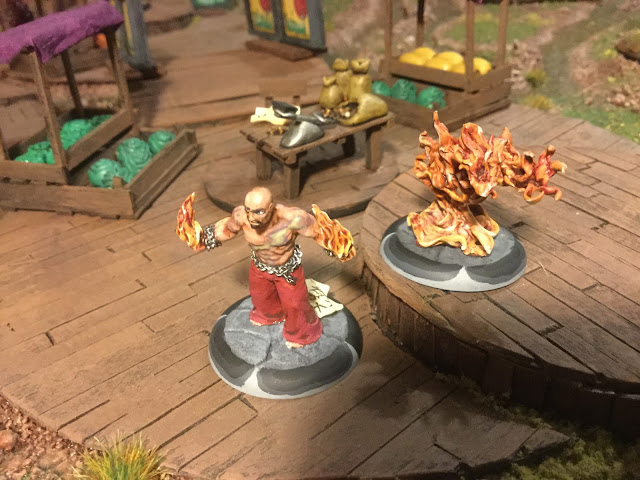 So super excited about the arrival of the rest of the gang over xmas and my birthday which is just after.