as regular readers of this blog will know I have recently been exploring the game - Bushido by GCT Studios, you can find their excellent website here
I started collecting the Temple of Ro-Kan faction following a black friday splurge and ended buying 8 fighting monks and associates.  Fast forward to Salute 2016 and my opportunity for another load of Bushido multibuy goodness! Visiting the GCT stall, i had a great chat with the sales team and a little play through which cemented my desire to play the game again.  The trouble was the vast array of gorgeous Bushido models on display weakened my resolve about which faction to buy,  In the end I bought the show specials Bikou and Kappa and an absolute shed load more - roughly £150 retail worth, all for the show stopping price of £70 - what an awesome bargain!!  So the faction that i went for was the Prefecture of Ryu, here is what the GCT website has to say about the faction....

The Dragon Clan won the rights to colonize the Westward Isles in a series of duels with their rivals, the Shiho Clan. However, when the Emperor’s vessel expired, and his young heir, too young and inexperienced to concern himself with the petty disputes at the fringes of his lands, the promise of sole settlement rights died with him. The newly formed Prefecture of Ryu found themselves yet again in conflict with their old enemies, the Shiho Clan. Now, the Prefecture’s grasp of power is weakened, due to the recent Tsunami. Their forces are in disarray, they are fighting on all fronts in the aftermath of the disaster. But still the men and women of the Dragon are ready to take their place at Destiny’s table, uniting the human world by defending it against all threats.

The reason I went for Prefecture, apart from the cool samurai was this guy... 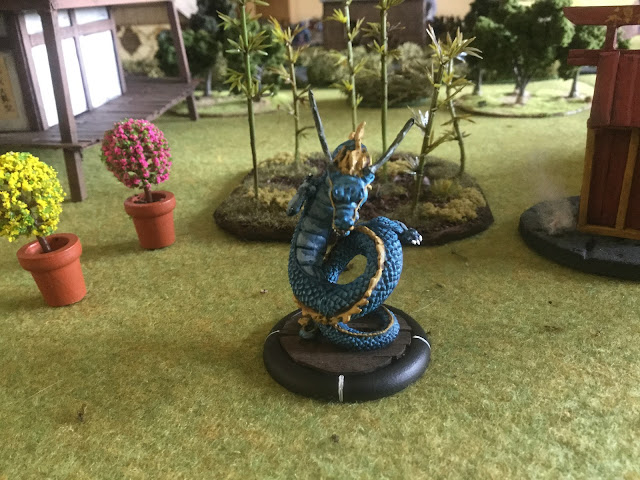 Mizuchi was recently awoken by the blood of Asama Takashi and he is sworn to protect her twin, Matsu. Swooping into battle he uses tail, tooth and claw as weapons against any who oppose the rule of the Prefecture of Ryu. His ability to quickly and easily traverse the battlefield have already proved the difference in many confrontations. Many within the Prefecture say that Mizuchi is a gift from the Kami’s and a sign of their right to rule.

Japanese dragons (日本の竜 Nihon no ryū) are diverse legendary creatures in Japanese mythology and folklore. Japanese dragon myths amalgamate native legends with imported stories about dragons from China, Korea and India. The style of the dragon was heavily influenced by the Chinese dragon. Like these other Asian dragons, most Japanese ones are water deities associated with rainfall and bodies of water, and are typically depicted as large, wingless, serpentine creatures with clawed feet. The modern Japanese language has numerous "dragon" words, including indigenous tatsu from Old Japanese ta-tu, Sino-Japanese ryū or ryō 竜 from Chinese lóng 龍, nāga ナーガ from Sanskrit nāga, and doragon ドラゴン from English "dragon" (the latter being used almost exclusively to refer to the European dragon and derived fictional creatures).

more pics of my efforts.... 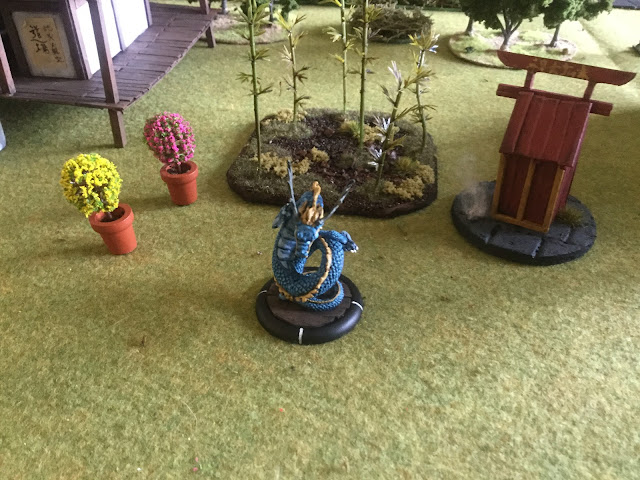 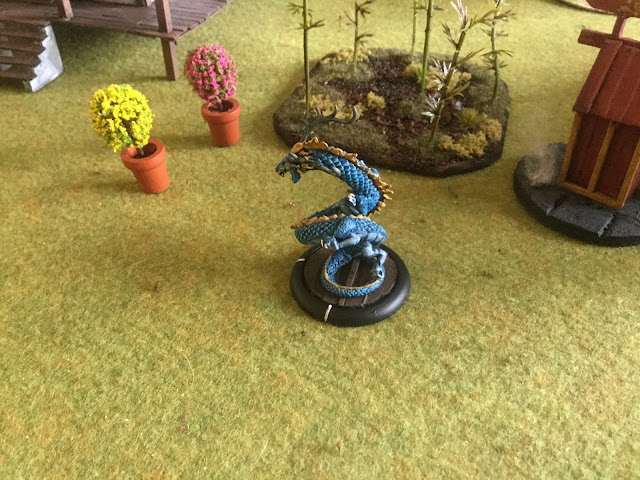 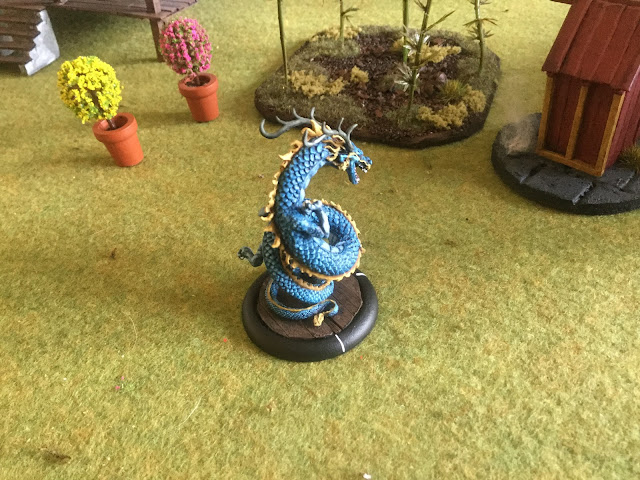 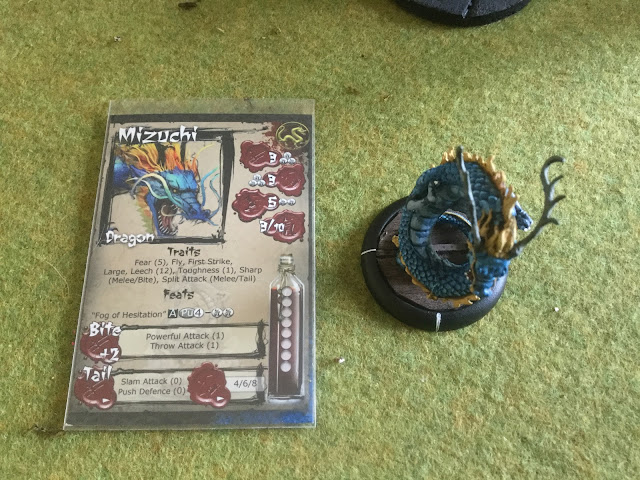 Mizuchi was the first Bushido model I ever saw after searching for miniatures for a WFB Nipponese project I had been contemplating (which ultimately came to nothing!) and was a factor in me returning to look at the game some years later.  I painted him in GW paint - Lothern Blue for the scales and fenris Steel for the underbelly and feet, Iyanden Darksun for the mane and Vallejo German Field Grey for the horns.

All of my Prefecture models will be based on wooden floor boards made from coffee stirrers rather than my usual ballast/static grass combo and all will feature blue in the scheme somewhere to tie them in together.

As you can imagine Mizuchi is a very heavy hitter and this will be his role in the few games i'll be able to afford to field him, chomping down on the big opposition while the rest of my force mop up the objectives.

You may also notice in the pictures a new terrain piece i had been working on at the same time - the Shinto Shrine. 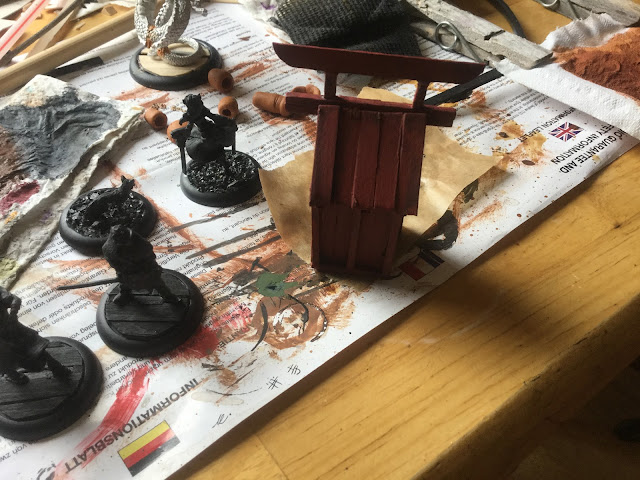 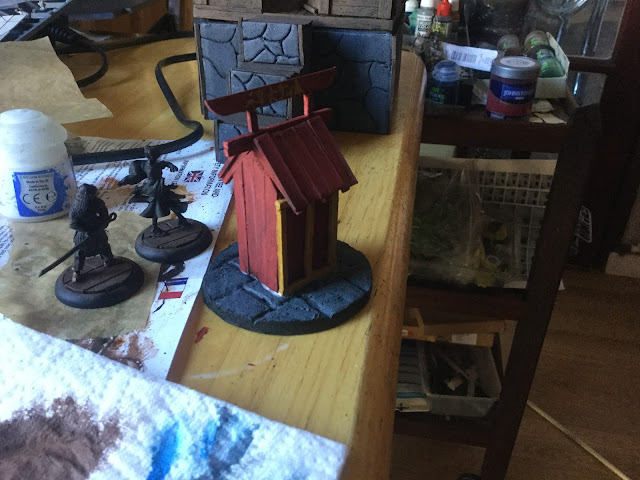 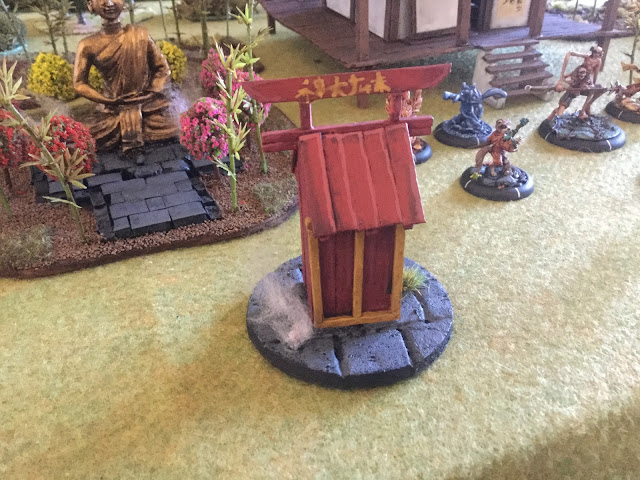 Due to my limited skills and tight budget for terrain, its not overly burdened with ornamentation but instead represents the more rural roadside type shrine built by the local peasant classes.  Made out of the now modelling staple - coffee stirrers and matchsticks, i made a simple box before cutting inverted V,s on either side, stirrer planks laid across the beam give it a roof and a half a stirrer along the beam gives it a Shinto feel. I used matchsticks to model a door frame that would give it some bas-relief and then mounted on a foamboard base with the uppermost card layer removed and stones carved into it.  The whole model was painted using emulsion from a tester pot - Johnson's Spiced Red and then washed in GW's Carroburg Crimson and highlighted.  The relief was painted a golden yellow colour with Iyanden Darksun and washed in Sepia. The kanji are representative of the five kami (elements) Earth, Fire, Water, Air and Void/Heaven. Finally to finish the piece I added one of the votive candles i had left over from my Buddha piece that you can find here

I'll leave it there for today, more Bushido to come (groan from some, cheers from others) but for the time being enjoy your Bank Holiday - for those of you in the UK at least! (it's a bit grey here in Kent, typical!)