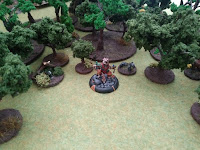 Akari, Master Monk of the Temple of Ro-Kan, held up a furry paw and chittered softly in the secret Tanuki tongue into the wind.  The whispered plea, buoyed by a thread of the master’s spirit energy -Ki, spread out among the ancient boughs of his forest sanctuary. Akari rested back into a meditation pose, cross legged on the gnarled tree stump that had been moulded to his diminutive frame. Moments later, a pair of tiny birds, their bright plumage flashing in the weak light of the glade, flitted over to his outstretched arm and came to rest. Solemnly, the ancient Master addressed his avian messengers.


“Little ones” he began, once again reinforcing his words with gentle whispers of his Ki, to settle the nervous nature of the wild creatures.


“Fear not, we face a challenge to the Balance and you must carry my words to the others in my stead. We have little time and I must determine the truest path for us to follow. Gather the younglings, bring them to me, the children of Ro-Kan and their companions will be our instrument, their innocence will counter the conniving political wrangling of the Prefecture and will restore the Balance.”


The birds, their feathery breasts puffed out with the importance of their mission, bowed their heads and spreading their wings darted off into the forests surrounding the Temple grounds.


Akari nodded his satisfaction and returned to his prayer pose. Opening his mind to the shining streams of Ki, he gently pushed his spirit out once more, hoping to determine the best course of action to prevent the pride of the Prefecture from pushing them closer to the darkness that threatened to overwhelm the Jwar Isles.


Following the tiny thread of probability that he had discovered, he attempted to unknot the twisted skein of possible events that led to the upsetting of the Balance.  Satisfied that he had found the right thread he tracked back toward the nexus point – the crucial moment that tipped the Balance.


“There!” he muttered to himself


In his mind, he saw a powerful samurai clad in full battle armour surrounded by a small band of Ryu retainers.  The samurai, clearly a member of the ruling house – Takashi, handed an important looking scroll, dripping with seals and ribbons, to a human female and bade her to guard it with her very life.


The retainer bowed deeply to her lord, clearly pleased with the honour of bearing such a prestigious document.  Placing the scroll into a leather bag and slinging it across her shoulder, she adjusted the large katana at her waist. With that, the retinue moved off setting a fast pace, clearly at haste to deliver the message.


Akari, with a quick focus of Ki, moved along the thread a little further, tracking the party across the cultivated lands of the Ryu clan and into the foothills that marked the border with Ro-Kan.  Here in the southern reaches of Akari’s adopted homeland the samurai drew his party to a halt.  A gentle nudge of Ki and the timeline edged forward a few hours to the point where a small group of green clad humans approached the Takashi lordling.


“what brings the Snake to parley with the Dragon?” 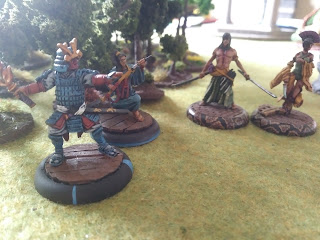 Whatever it was, it signified a shift in the Balance and that needed to be addressed.  Akari reached for his Ki and shifted the timeline back to the arrival of the samurai and his band. Drawing on his spirit energy he created a replica of himself and his companions and inserted the band of monks into the probability thread.  With that done, he drew back on his view until he could watch the events unfold.

Unbeknown to the ancient Tanuki, a small flash of red fur streaked across the unfolding conflict, ducking in between the twisted trunks of the woodlands and peered out from the thick undergrowth.
Posted by Da Gobbo at 08:48