I recently found some amazing Teenage Mutant Ninja Turlte models from a company in Russia called My Way. The figures are excellent  and I've already posted about them. Well my good gaming buddy Rich, who's work I showcased in my last post has photographed them for me so you can see them as they should be rather than my poor attempts on an iPad with bad lights. Thanks Rich, they really look great! (imho) 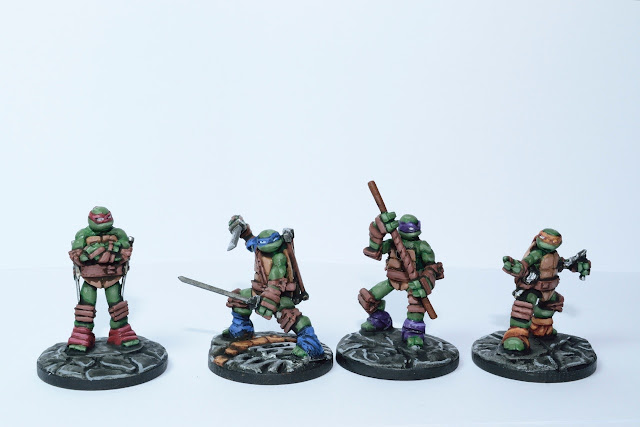 But these figures aren't for show, otherwise I would have put them on their decorative base (which is just as good!) I wanted to game with them so I've been looking at various gaming systems to play and am currently vacillating between 7TV2 and the TMNT original rpg by Palladium which you can buy on a pdf. But surely they would need an adversary I hear you say.....step forward the Foot Clan!

These bad boys are from Crossover miniatures and distributed in the UK by the excellent Minibits.  I have had nothing but the very best customer service from Leon at Minibits and now buy all my bases and custom mdf trays from him, I can highly recommend him and these cracking sculpts. They do come in two different head variants with the other being traditional ninja cowls, but I wanted the iconic Foot Clan bug eyed cowl.  I painted them mostly black, but in the comics (certainly the later comics) they started to sport purple trim, so in order to break up the monotone I did the same. 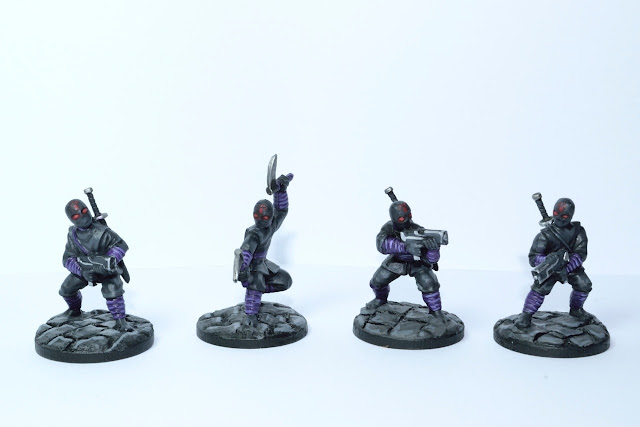 Now if you are wondering about the rest of the TMNT world, don't worry I've got it covered! When I get them built up and painted I'll show you some figs that will get you reaching for your wallets.....

i'm going to start a tally of painted minis vs incoming figs or figs that i've bought this year since the 1st Jan (at some point when im massively bored i might count the lead pile!) so after each post showing painted figs you will see this kind of thing or at least i will until i get bored or forget....