hi guys, sorry i couldn't wait till Friday to post this (I'm going to have a mid week post for a little while as i have 9 posts backing up as i'm getting loads of gaming time in!)

Following on from my TMNT posts, the last reinforcements for the Foot Clan faction have muscled their way in.  Thought to be two original protaganists of the Turtles, Bebop and Rocksteady didn't make it into the lineup until the Turtles cartoon had taken off in 1987 and were actually a marketing ploy as the manufacturer of the TMNT action figures -Playmates told Peter Laird (co-creator of TMNT) that they needed more mutants to oppose our heroes.


Bebop and Rocksteady were introduced in the series as part of a human street gang in New York City that was employed by Shredder. Rocksteady was a short and stocky blond Caucasian man, Bebop was a taller African American man with a purple Mohawk. With the other members of their gang, they were sent out to stop a Channel 6 reporter named April O'Neil from doing a report about crime in the city. April ran down into the sewers while being chased by the street gang and met the Teenage Mutant Ninja Turtles, who then defeated the gang in a fight.
After this humiliating setback, The Shredder developed a plan to defeat the Turtles by mutating members of the street gang that Rocksteady and Bebop are a part of so that they would have abilities greater than the Turtles'. Rocksteady and Bebop both volunteered to undergo the procedure (though neither was particularly aware of what it would entail) first with the promise that it would allow them to exact revenge on the Turtles. As the result of being brought into contact with a common warthog and a black rhinoceros that Shredder had abducted from the zoo, Bebop mutated into a humanoid mutant warthog while Rocksteady mutated into a humanoid mutant black rhinoceros.
Although the transformation did make them larger and stronger, they remained incompetent simpletons and were completely inept at stopping the Turtles or carrying out Shredder's plans. Throughout most of the series, they tried to attack the Turtles with brute force, without applying knowledge and strategy.

Before I show my humble efforts I also need to introduce you to another addition to my Foot Clan faction - Warlord Krang!  Krang was a warlord from Dimension X. To punish Krang before sending him from Dimension X, Krang´s brain was stripped from his body and his body reduced to a brain-like form. Banished from Dimension X, Krang ended up on Earth.
While on Earth, Krang allied himself with the Shredder, who, along with his robotic Foot Soldier army, moved into the Technodrome. In exchange, the Shredder had to design and build a new body for Krang, a human-shaped exo-suit. Shredder lived up to his part of the bargain, in no small part because he was unable to deal with the Turtles and needed Krang's help. Krang's ultimate goal is to take over the Earth; it probably only became his objective after he was exiled on the Earth, but this point has never been made clear. Every plan Krang conceives is either aimed at that goal, or towards the short-term objective of powering-up the Technodrome. He does not share Shredder's obsession with the Turtles and Splinter; while Shredder sees them as mortal enemies, Krang seems to regard them more like annoyances to be destroyed when they interfere in his plans. He and Shredder are constantly bickering about tactics and often take pleasure in the other's failings.


So here's my version of Bebop, Krang and Rocksteady.  the figures are from Greebo Games and are part of their Fantasy Footbal range.  I've tried to paint them up with the original colours from the 1987 cartoon series as the mutants did not make it into the comics until afterward. 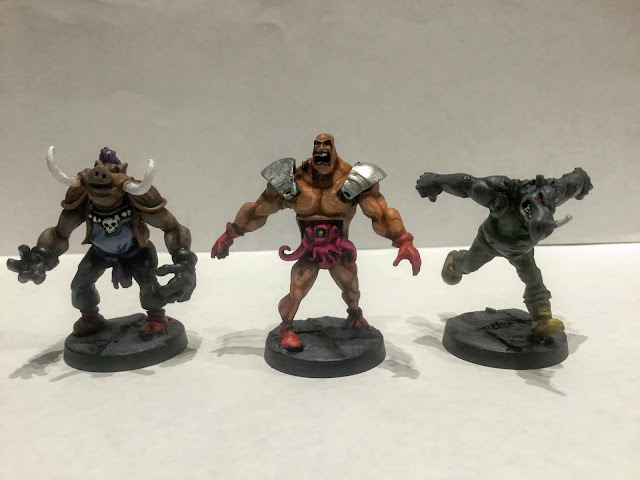 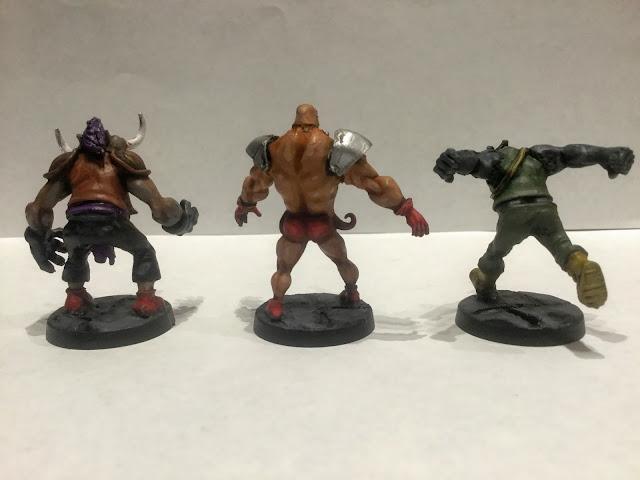 Rocksteady and Krang were fairly easy to paint up - Krang is citadel's Warlock Purple shaded with Carroburg Crimson and his robot body painted up in human flesh shades. Rocksteady in various shades of grey with Vallejo's German Fieldgrey for his combat pants and Vallejo khaki for his workboots.

Bebop was a bit more of a challenge as i wasn't really able to decide what flesh tone to for him, is he browns or greys? i went for both in the end with a Vallejo sea grey washed with 3x coats of reikland flesh tone to give a unique skin tone ;-P

All of the figures are multi-part metal models which is a major pain in the backside with lots of pinning, superglue, filler and swearing involved in their construction as well as the now obligatory polyfilla base.  Apart from the oversized hands on Bebop which are ridiculously big and heavy looking, these models and the other Greebo Games figs for this range are amazingly good.  Really decent sculpts, joyful to paint and look spot on for the TMNT genre.  Other figs that I didn't buy were a Baxter model and his mouser robots and the foot clan ninjas (i prefer the Crossover sculpts) The Turtles themselves in the range conversely, while still excellent sculpts, don't do it for me and i'm more than happy with the figs i got from MyWay miniatures and i said earlier i prefer the Crossover ninjas than the Greebo's.  The only problem I had with Greebo's, apart from the slow delivery (still within their promised delivery date though, just slow compared to what we are used to!) is the prices.  The minis are quite expensive, with the cheapest at nearly 7 Euros each and the bigger ones nearly 8 each so it can be quite prohibitive but I couldn't help it when I clapped eyes on the figs.

Now i've painted all of the models for each faction up I need to game with them and I intend to use 7TV2 as the system as a bit of a trial and see how we go.  I will report back to you to see how it goes.  In the meantime.....