A little while back as you may know, I purchased a model helicopter kit 1/48 version of the Westland Wessex. A venerable old aircraft it was used extensively by the RAF and the Royal Navy for search and rescue as well as anti-submarine warfare duties back in the 70's and 80's. This model took me right back to my childhood and I was very easily persuaded to paint it up as I remembered it.

Eventually I decided to do it as the Navy version as I had the source material on the box as well as plenty of online pics. Also there is a Wessex in the Spitfire museum less than 5 miles from my house. So please find my version below...

Firstly the astute purists amongst you will note that I have not attached the ASW modifications to the aircraft, this was deliberate. I wanted a sleeker look plus I figured any useless additions would be jettisoned by the crew in order to preserve fuel in an apocalypse, I mean zeds don't drive those subs do they?!? Plus there were some slight issues with me mixing the variants up a bit to produce a chopper that was pleasing to my games.

I painted the model using Citadel paints and washes, the interior was painted before final assembly so I could get the detail done. The extensive decals really make the model and I'm pleased with the way it looks. It was fairly easy to put together and overall I would rate the model as really good.....however......it does look a trifle big!

Measured against a 28mm mini, the cockpit and bench seats and indeed the whole model I'd say are spot on. But then you compare it to my buildings and it starts to look very disproportionate and way too large, in fact it is too big for my helipad I put on my hospital. When I put it next to my 4ground buildings it is the length of 3 terraced houses! Now it is in reality a big aircraft, but not that big! So I'm not sure what to do, I like it a lot and have already used it in an ATZ scenario but I may have to get another chopper to fit the scale a bit more and be a bit more aesthetically pleasing......oh well 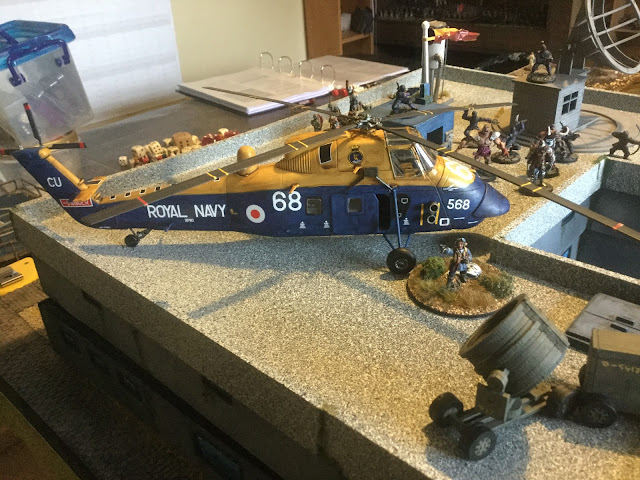