An off schedule, very quick, rough and ready Post salute post (I'll leave the dissection of the day to the experts). This was my first major show and what a show it was! I don't remember who did what and I'm just going to post a load of pictures of the demo games of which there were loads, all of good to excellent quality and the ones that I played were fun including Bushido which, despite my recent posts was my first game of it! It was awesome and I'm glad I got a faction before, I also bought a second faction immediately after playing which will be featured as and when I get them done (I still have a few more posts from my Temple of Ro-Kan faction yet). I also played Wacky Races based on the cartoon from the 70's - loads of fun! And a 54mm Napoleonic game by Victrix - the minis were amazing.

I managed to spend a ton of cash, although I could have spent a ton more! The discounts I got were amazing all on games I wanted to spend money on - no frivolous spends for me. As well as a new Bushido faction I grabbed the Saga rule set, a game I've had my eye on for years, an Anglo-Saxon starter set and accessories. With Rich and Chris also buying Saga stuff it looks like a little project is forming with each of the guys promising to contribute their Saga saga (!) to this blog, something to look forward to I hope.

Anyway the first pic is of all the swag I grabbed from the show including Saga, Bushido, Hasslefree and bizarrely some kangaroos....... The rest is of the demo games and the last is a pic of the nerdy travellers 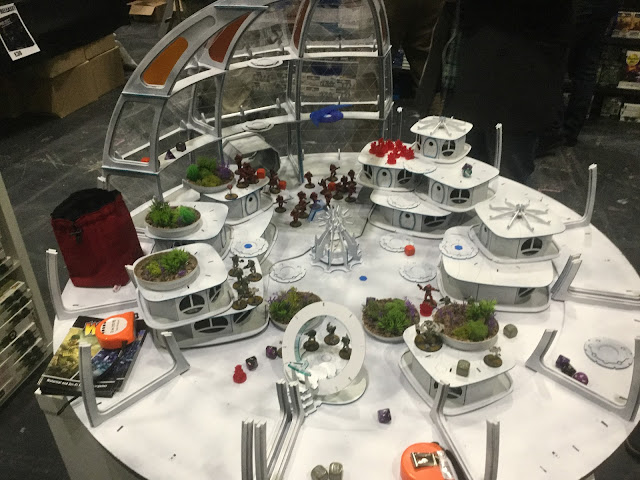 Ps my apologies to my fellow bloggers, I missed the meet. I was there I promise but for some reason never connected, i guess it doesn't help not knowing what you guys look like in the flesh. Maybe next year! i'll wear a red carnation instead of my Zombie t-shirt....

Email ThisBlogThis!Share to TwitterShare to FacebookShare to Pinterest
Labels: Salute