The fury of the Chrome Sea, the shark is the apex predator beneath the waves and Arata is just as frightening above water. Dazzlingly fast, driven wild by the smell of blood, he is a pure monster when unleashed. Whether savaging startled enemies with a maw of razor sharp teeth, or bowling then over with tremendous force he is a formidable warrior. Like all those changed by the great Kami    Sumiyoshi Sanjin, little is left of the man he once was but this does not matter in times of war.

As soon as this miniature was released I wanted him in my faction, in fact he was the reason I wanted the faction in the first place. I mean a frickin' Man-Shark for goodness sake! No matter what his stats were like or his rice cost he was gonna get caught in my net (ahem, sorry) as it happens his very reasonably priced in the game and worth the punt.

Looking at his card he stacks up pretty well, for just 7 rice he comes with 3 dice in melee with a charging bonus of slam attack (0) or an extra 1" to his move and sweep attack (0) if the model is wounded at all.  Causing models to lose a dice in melee or an activation through his "Fear (4)" trait enhances his chances of using those razor sharp teeth on his opponent! If he gets the Ki "Hammer Strike" all but ensures that he'll batter through any defence. He also comes stacked with "Sixth Sense" which is useful for sniffing out those pesky ninjas or seeing through the Bakemono induced "Darkness" that has been plaguing my games recently.  With a healthy 8 point wound track it's hard to find something not to like but then you get to "Impetuous" as a trait and you can see that tactically he's not all that subtle... This trait means he always has to be activated first which can be a real pain and can offer the tactical advantage to my opponent.  However not to worry, just point him at the enemy and let him munch his way through them with abandon! 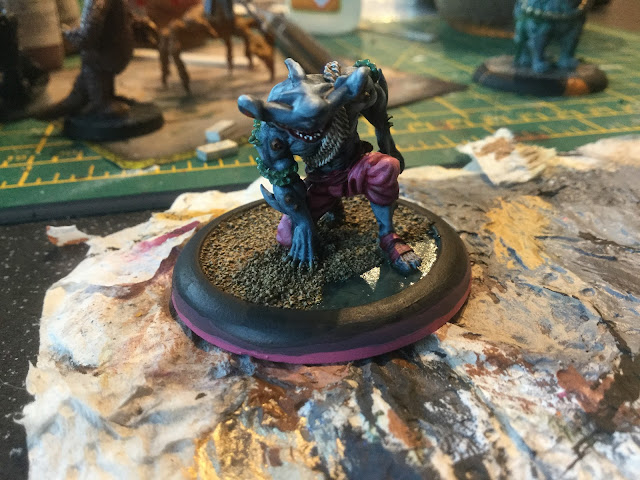 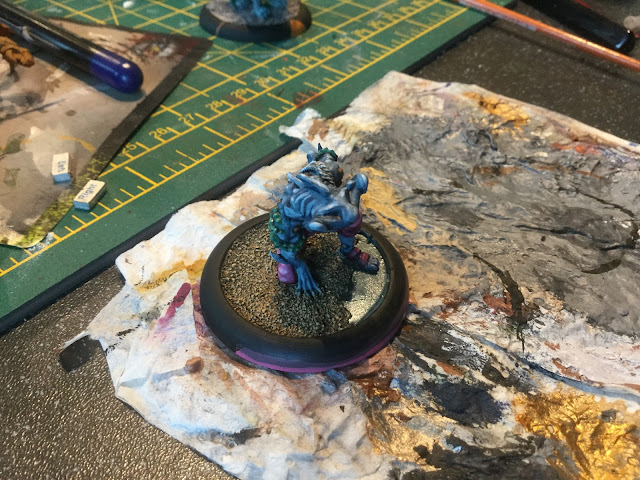 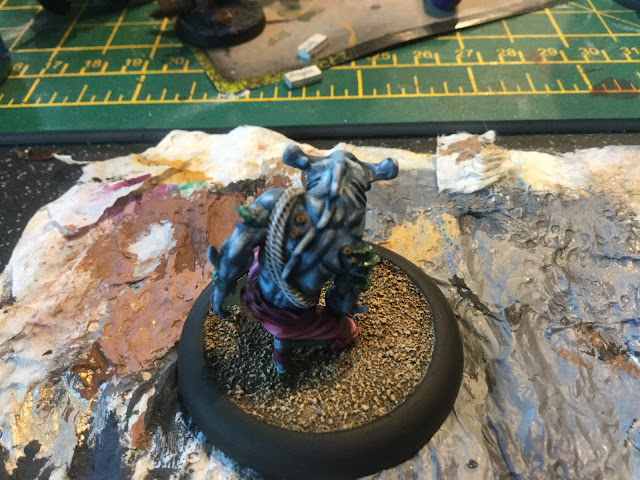 Paint wise he was relatively simple as a I used GW "Fenresian Steel" as a base coat for his rubbery hide and coated it with a healthy dose of blue ink and highlighting up.  The breeches are the faction colours to tie it in chiefly GW's "Emperor's Children Pink" and shaded with red ink.  The base was a very simple sand to represent a piece of coastland.

Use wise, he's simply there to bring the pain! no point in him trying to work the scenario as he always has to go first, so just point and shoot - job done.