Control Zones and other terrain pieces.


Some background first, so missus Gobbo got some fancy chocolate mints over xmas she scoffed said chocs (with the help of a certain rotund Gobbo) and then took a long critical look at the packaging, without blinking an eye she hands it to me and said "that'll make something interesting for your funny little men stuff".  Having gotten used to the terminology that my better half has for our hobby, I shrugged off the "funny little men" comment and looked at what she handed me and by jove she was right!  This is what she gave me.... 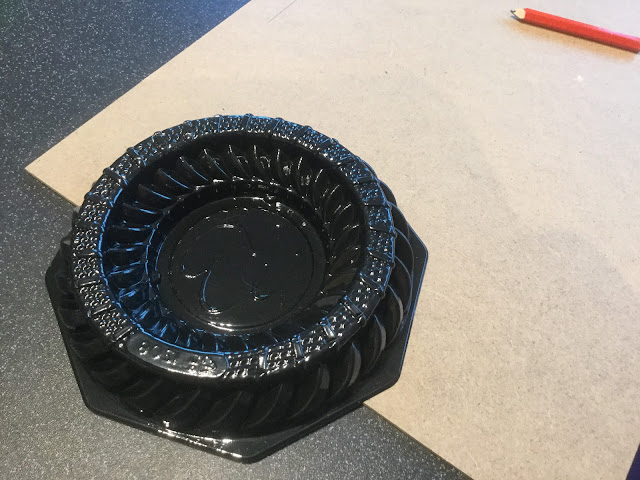 Right away I thought pond or portal!  Measuring the width of the piece the diameter of the wall is 4" from just inside the wall.  This is perfect as a zone of control in Bushido - so Koi pond it is!  Now I already have a Koi pond that I made some months ago for my Temple board but it really is a decorative piece only, I wanted this to have function, plus I had received some plastic Koi from Master-Crafted Miniatures for xmas (among other things by Ben).  First up it needed a base as the plastic is very thin and flimsy.  To that end I found a piece of 3mm MDF that had been part of a broken laptray and marked out a shape.  I liked the octagonal shape of the piece so replicated that for my base. 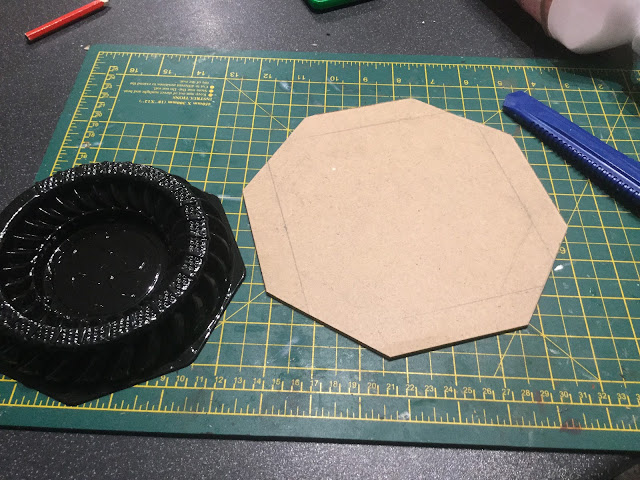 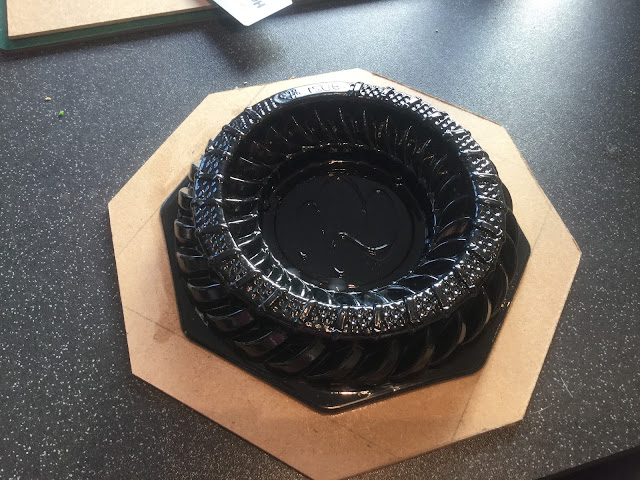 I then liberally covered the piece in homemade textured paint (PVA/Filler/paint/fine sand), idea courtesy of Luke Fellows of  Luke's APS. 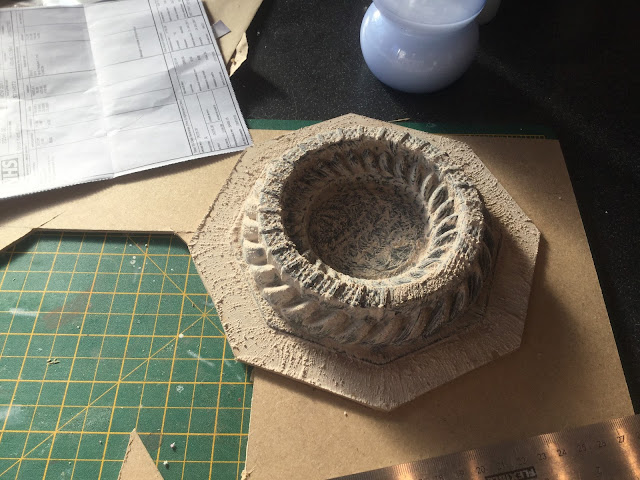 With that done I then used filler on the base to create flagstones and gave the whole model another generous coat of textured paint to strengthen the plastic. 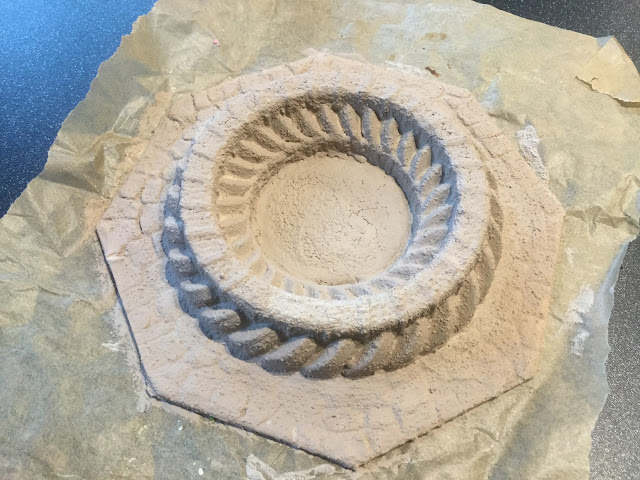 I then gave it a couple of washes with some homemade black ink. 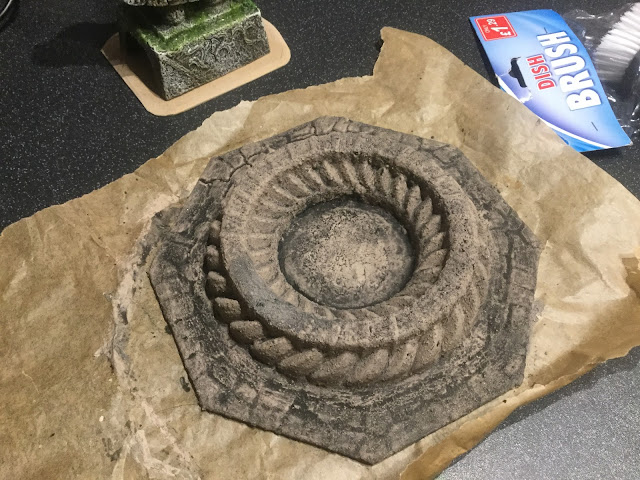 Then drybrushed to achieve the stone look I wanted.  Then I made up some vines/creepers out of Lichen, flock and watered PVA and applied it to the model as well as some reeds made out of an old scrubbing brush and hotglued to the base, adding a Koi to the bottom hiding among the reeds. 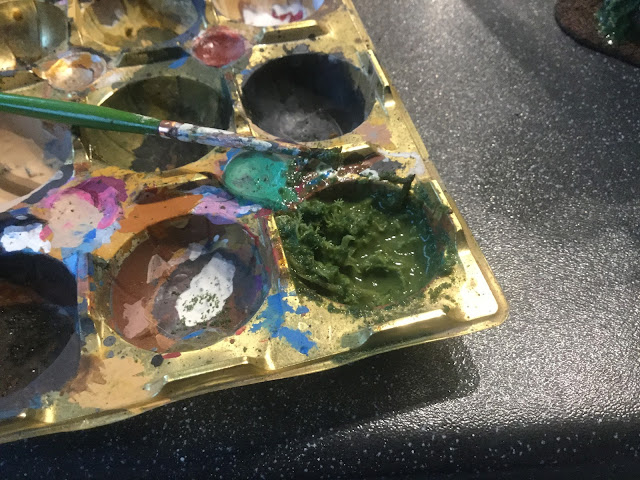 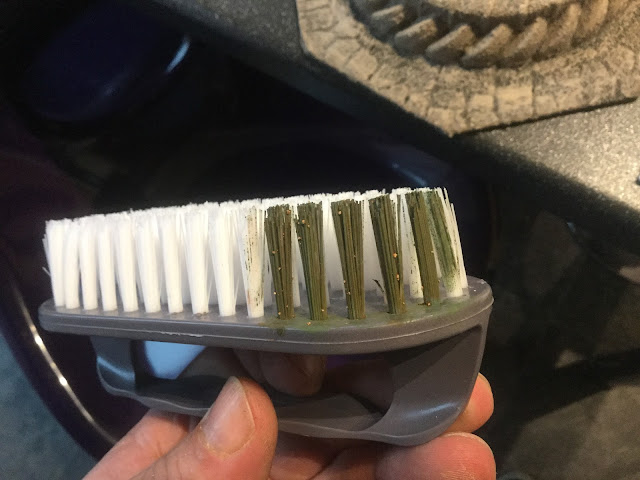 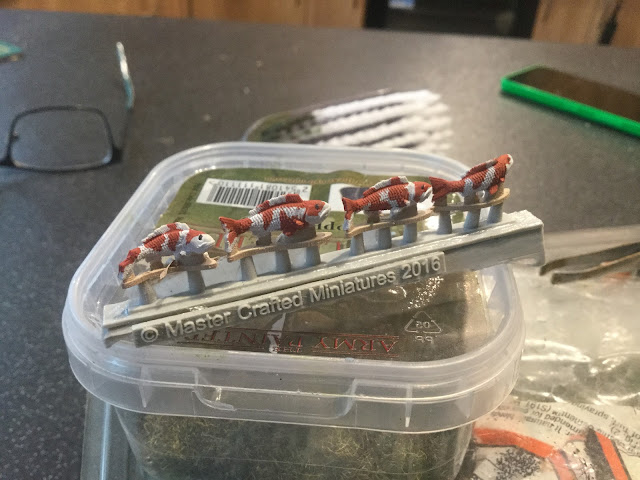 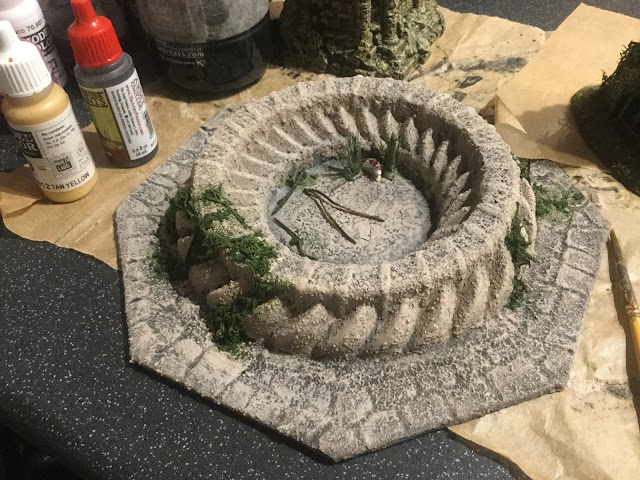 The next step was to fill the pond.  Now I could have used clear water effects to fill the pond but I wanted a slightly stagnant look to the water, no electric water pumps and filters here... So I used the cheap resin from Poundland to fill the pond adding 3 more Koi as I layered up the water.  I have to confess to rushing this bit as dinner was nearly ready so there are bubbles in the water but they don't look too out of place. 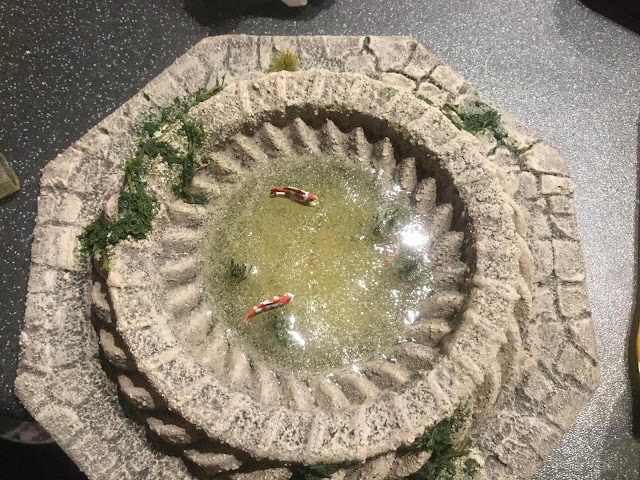 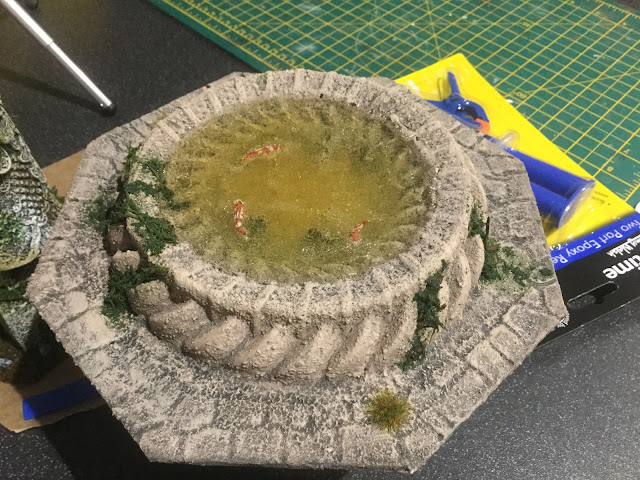 What I din't bank on was the plastic slightly melting in the heat of the reaction of the resin so I had o rebuild the wall a bit but this is the finished product.  Weirdly the models will fight across the top of the pond as they have to be in the zone to control it, but I like the idea of the fighters splashing through the serene pond in an effort to get at their foes, plus I like the look of it - so there!

Of course the scenarios in Bushido demand three such 4" zones so I had to put my thinking cap on. Yup I always had my circular disc cutter that my son had bought me for xmas and that I'd attempted to use before attached to a power drill resulting in the scars I'm currently sporting on my left hand... 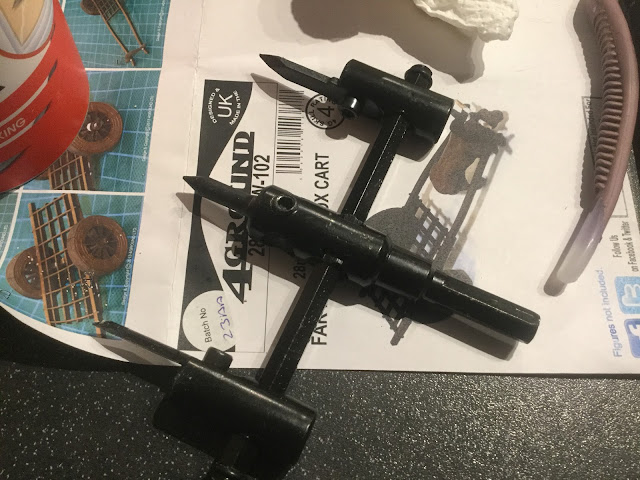 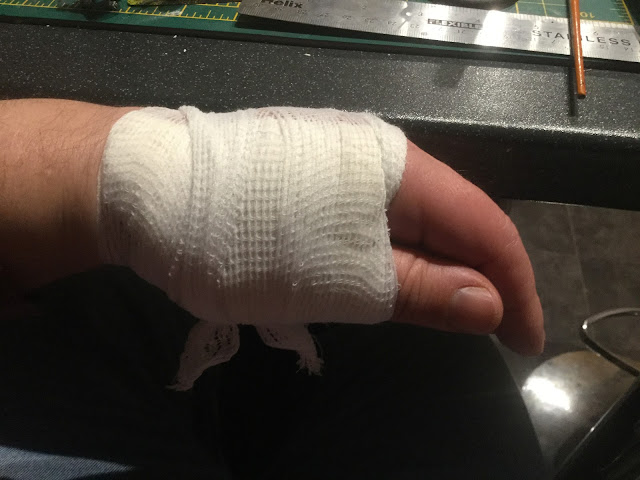 Not quite back to the drawing board but a little revision to the earlier plan was required.  Attaching the cutter to a hand powered drill and switching the clear acrylic for 3mm MDF and I came up with a nifty little idea.  I wanted to have faction specific control zones to mark each as friendly, neutral and enemy.  What I mean by that is a zone that is marked up with that factions symbol so as to easily identify which is which.  This should look visually pleasing and give an idea to a third party watching the game where the action is.  Now rather than make up 8 zones (or more when the range increases) I thought I would make three zones (I added a third in case I couldn't fit the Koi pond, which would be neutral, in to the available space) that could be adapted each game.  Rather than a slow, picture by picture tutorial on how I did it, I actually recorded me making the last one and have posted it to my YouTube channel the link to which is here.

Now each faction can have their symbol in the middle of their zone, simple and effective I think.

Lastly, while i was in the terrain making zone (sorry) I picked up some pieces from the Pet's at Home aquarium section as they are on special 3 for 2.  With a little bit of tweaking they make very acceptable Bushido terrain pieces. 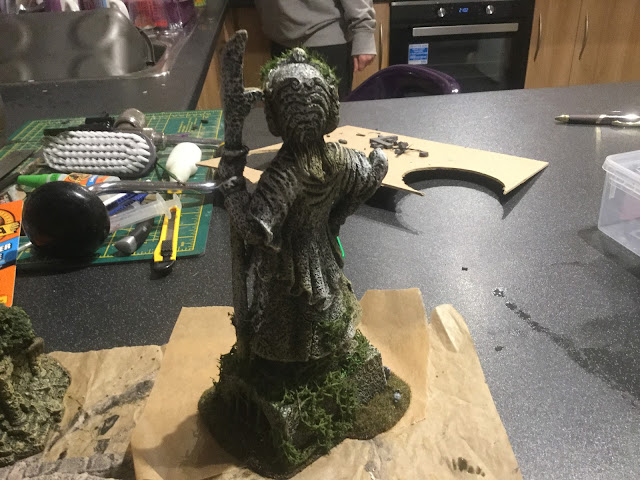 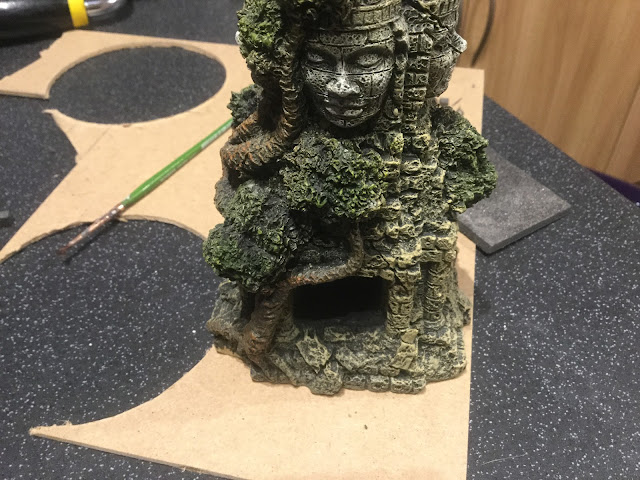 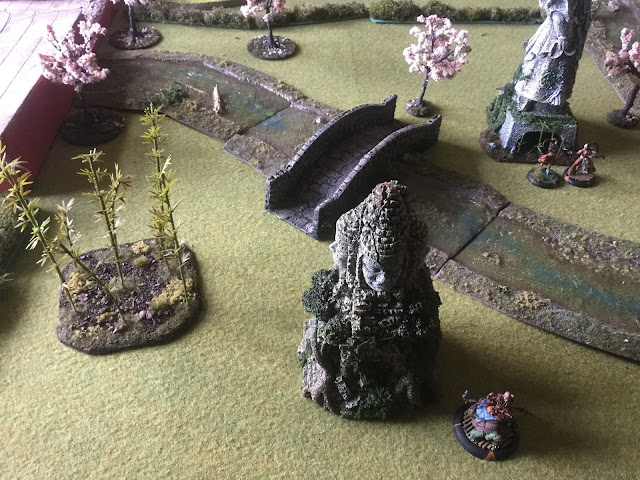 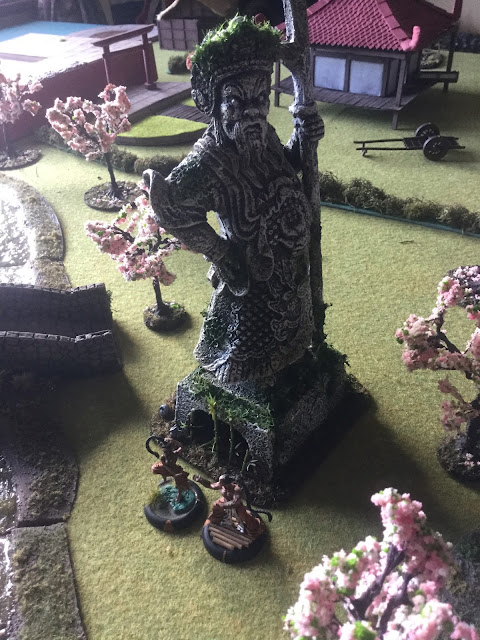 Email ThisBlogThis!Share to TwitterShare to FacebookShare to Pinterest
Labels: Bushido, terrain, You Tube, zones of control