During the US presidential elections the talented guys at Hasslefree Miniatures produced some eerily familiar faced models.  I'll let them introduce themselves... 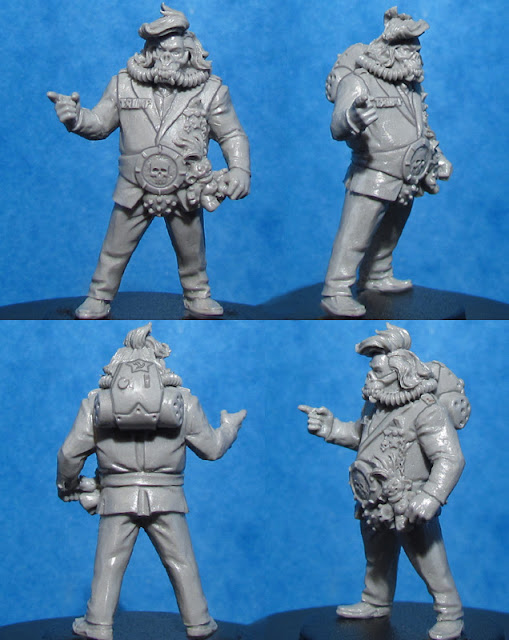 15 years after Drumpf became the leader of the Free World, the planet is in a catastrophic state. The oceans have run dry, the air is toxic, the bees have died and we have run out of spray tan.
Maintaining leadership via the simple process of ignoring reality, the Tangerine Titan continues to hold power and in fact has seemingly grown younger, hairier and more orange than ever. 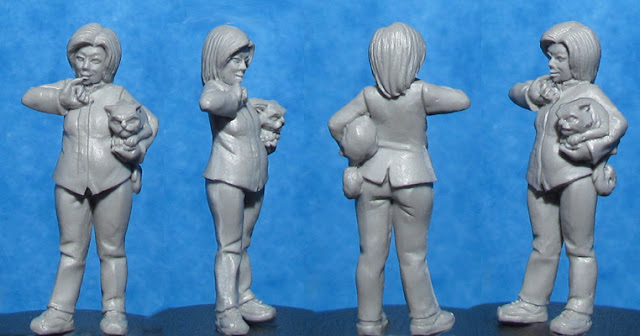 Leader of the opposition to Immortan Drumpf is the seemingly ageless warmonger Dr Evelyn Hill. Never seen without her equally ageless feline, Chairman Meow (Who some have guessed is just a series of carefully bred identical cats) or her unchangeable wardrobe.

Hill maintains her base of power from the gigantic nuclear bunker under Mount Rushmore and rumours persist that she has installed giant lasers into Washingtons eyes.

As you can imagine these quickly became a must have!  They were only produced in a limited run, in resin until the mold degraded to such a point where they could produce no more - even more of a reason to get them.  The only drawback is the price, these are very pricey models at £12.50 a pop.  A little eye-watering for some "funny little men".  However I was in luck as Missus Gobbo was in a fine mood, saw the humour in the miniatures and said I could get them.  Very quickly I placed an order, adding another miniature to the buy.  Some weeks later I received the parcel, it was weeks later because the guys at HF had had some medical problems (I really hope these are in the past now, if not get well soon guys!).  Not having any real plan for them I wasn't worried about a delay in the posting but as an apology the guys at HF added a free mini to the order! total result!  Anyhoo, a couple of weeks after receiving them I have got around to painting them.

Now I wanted to do something special with them as they were expensive and they were awesome minis so deserved the extra effort.  To this end I thought about the bases I wanted for them. To show you how I put the bases together I recorded the assembly and have uploaded it to YouTube the link to which is here. 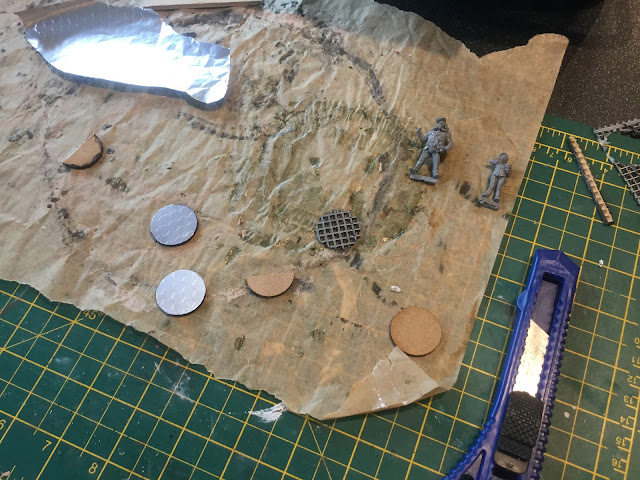 Paint wise, I used a limited palette for "not" Hilary, painting her Dr Evil/North Korean Dictator suit a muted grey.  Chairman Meow had to be painted in the classic Bond Villain white fur and just to add a bit of flair she is wearing light pink trainers/sneakers. 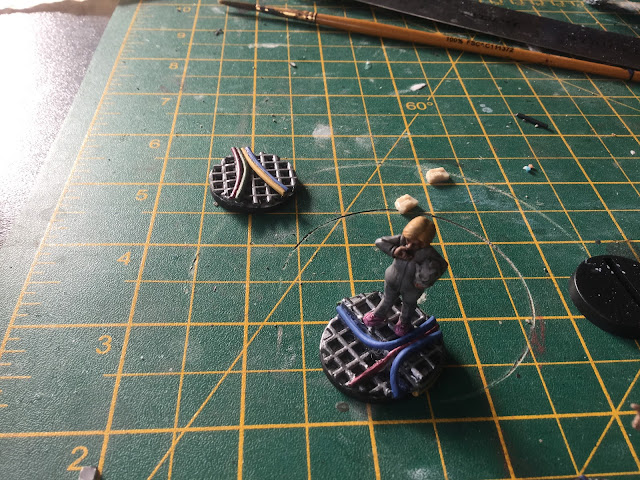 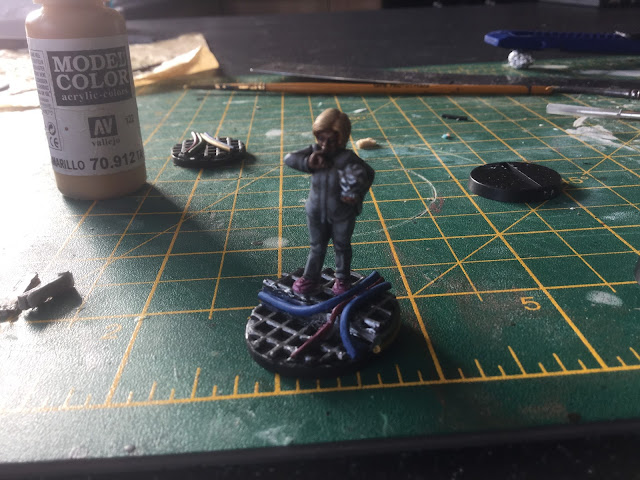 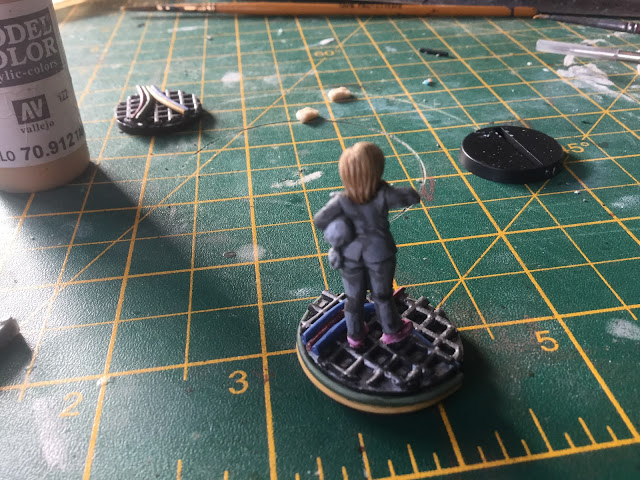 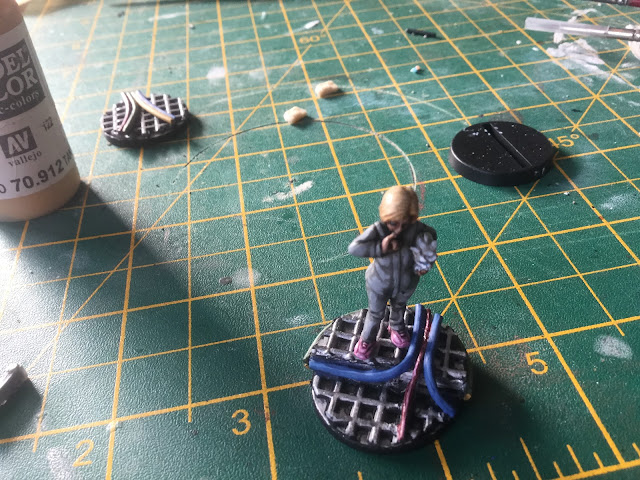 As for the "not" Donald, the skin tone had to have a very orangey feel so I added 50% Orange Brown to my flesh mix and shaded with reikland flesh wash before highlighting with the light tone mix and then adding more wash.  The Don's suit was based on recent images of the oaf's amazingly unattended inauguration with a power red tie and gold belt buckle.  I love the backwards "R" on his name tag suggesting his Russian connection or his idiocy - or both (I love the tongue in cheek humor in Kev's figures).  The troll doll is painted in the same flesh and hair tones as the main man himself. 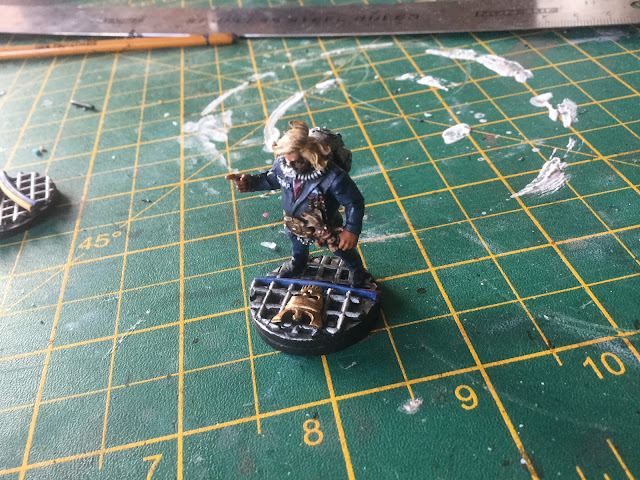 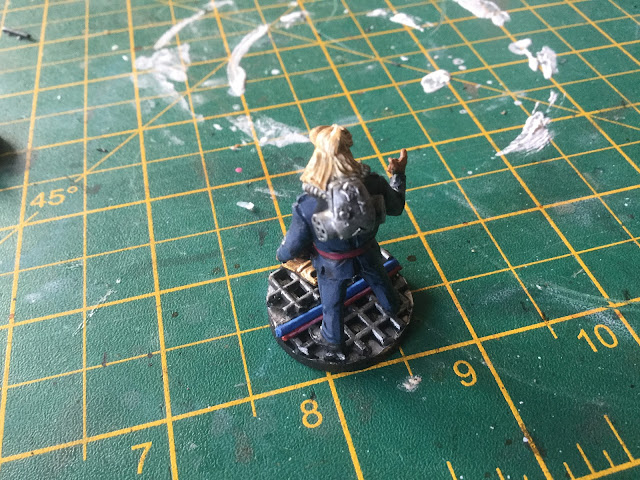 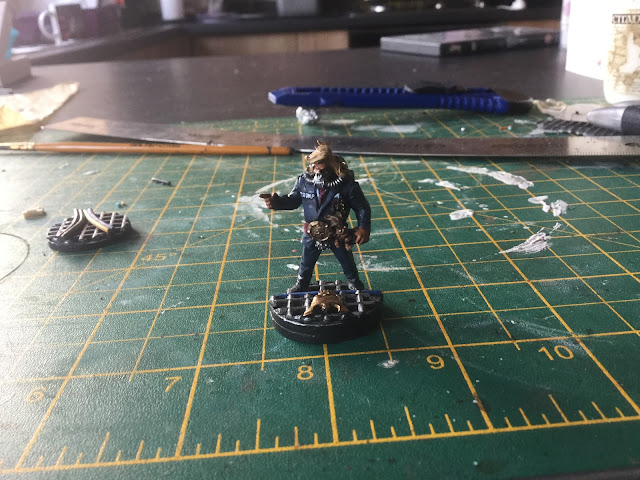 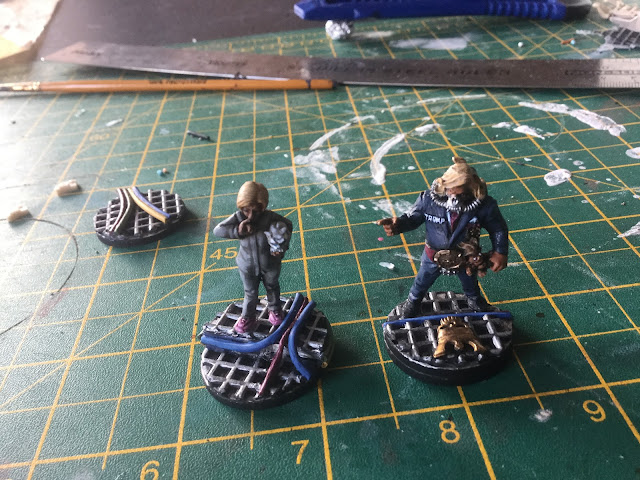 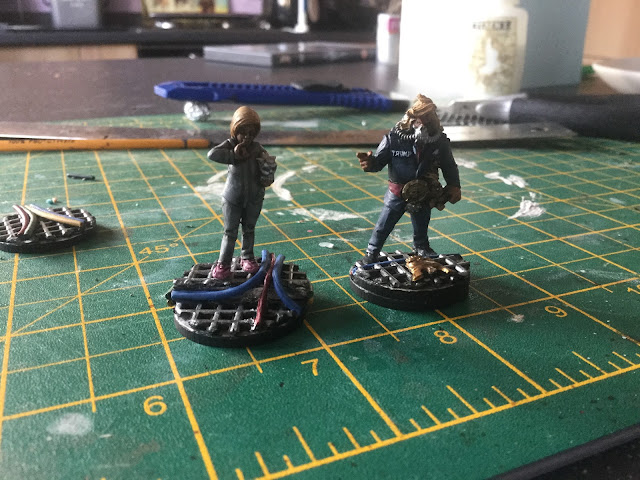 These miniatures won't be consigned to a dusty shelf though as I fully intend to use them in some 7TV2e games, I just need to find some suitable miniatures to represent the minions.  Once I find some then the two worst candidates in US presidential history can face each other again, this time away from the dispatch box!!

Leonard is a man with plans to match his frame, big. Starting as a lowly bouncer at a mob-owned club, moving up to enforcer he still has his sights set on larger goals.  Seen here in the best suit he can currently afford and armed with.. himself. It's enough, trust us.

So Leonard is a man on the rise not quite in the heady heights of super-villainary yet but surely its in his future.  He can either be used as a side kick to either Drumpf or Hill or a lower level villain to combat an emergent "good" faction or a street thug gang. My version has him in a darker grey suit and a pink shirt and red tie and added to my third sci-fi base. 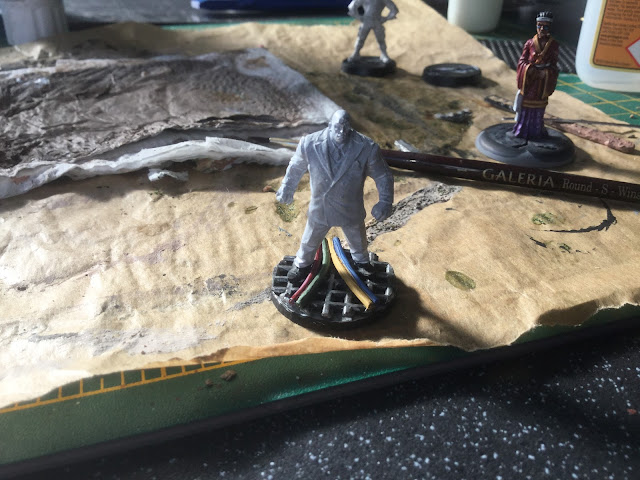 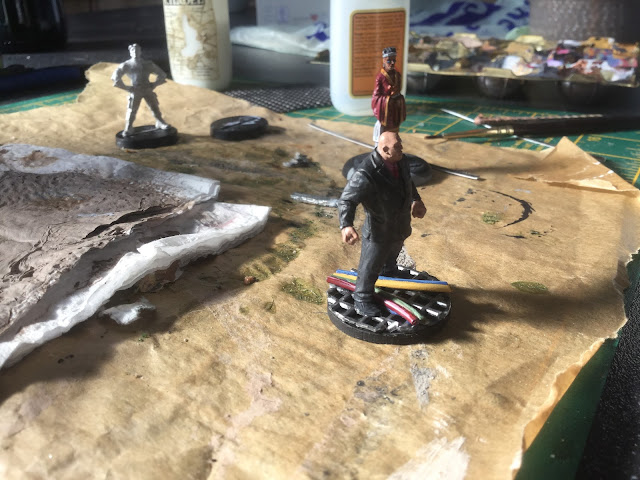 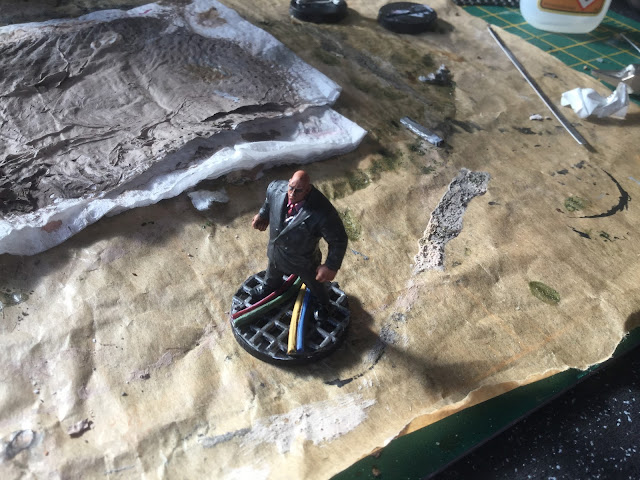 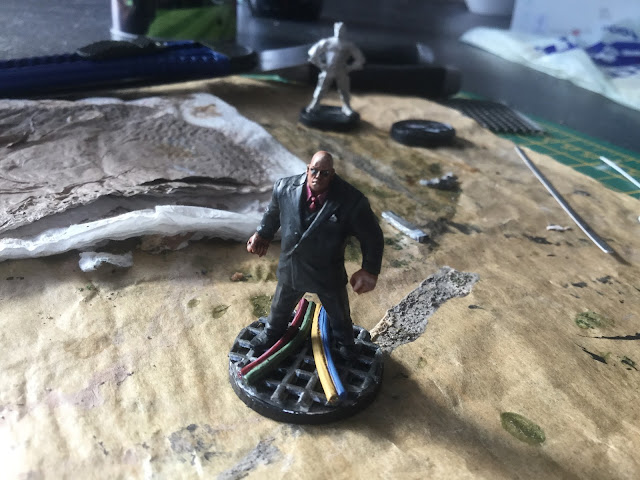 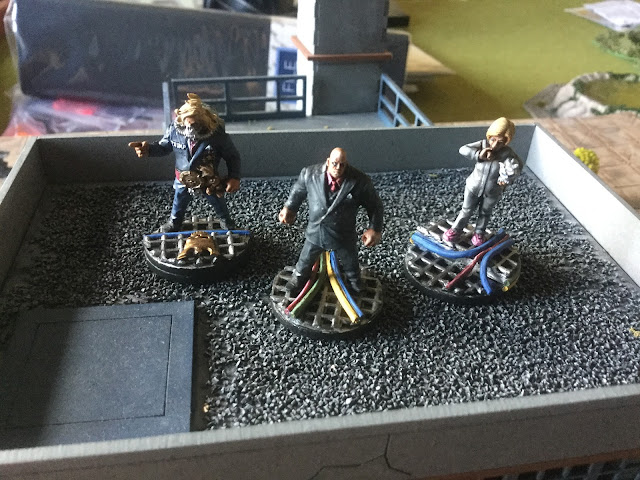 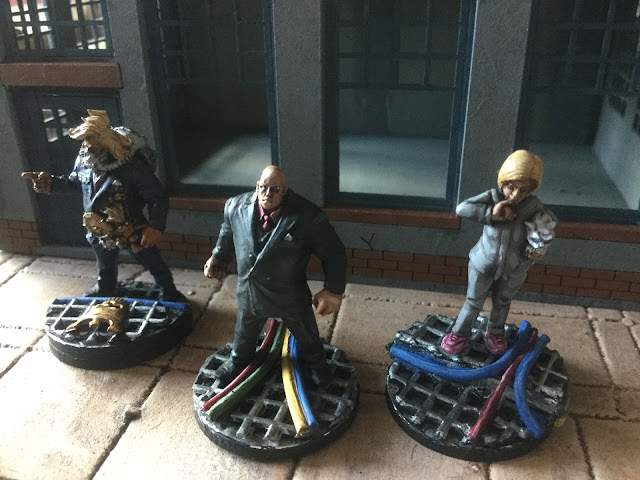 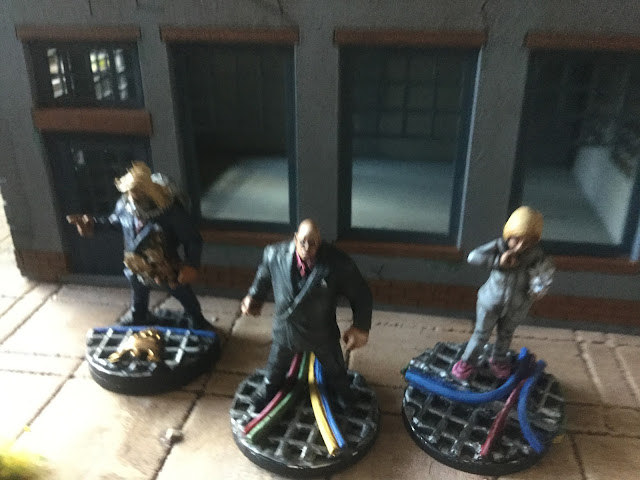 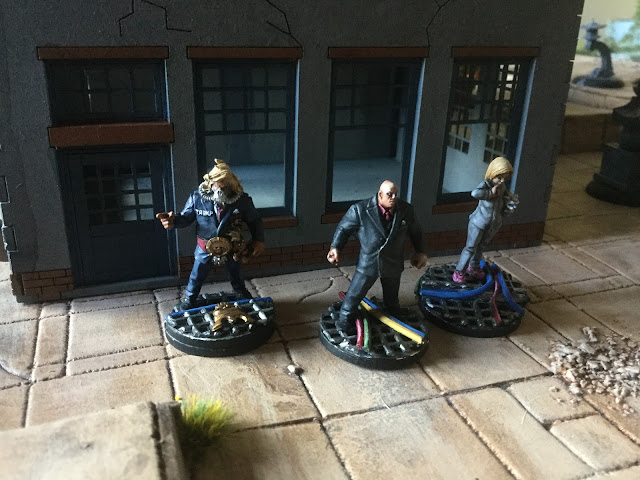 a fine trio of bad guys, now I need to find some gang members/minions for this lot and maybe even some good guys - TMNT anyone?