Just after xmas I posted a general, look what I got from Santa kinda post and it included Violet.  I rushed out a backstory to her and that was it.  Recently however following the demise of my Simpson family and hankering for some ATZ action, I took another look at Violet.  I've played some ATZ lately with my fellow blogger Damon of the newly started "Surviving the Zombie Apocalypse" his blog is here.

We have been running bands of survivors on the same boards, which has been interesting but we started at day 28, my band led by Violet and consisting of some well known faces has been doing well but how did Violet get to this point? I needed to do a better backstory for Violet to satisfy my love of RPGs and I thought why not play out the early days of the apocalypse and build her from there.

So we have - Violet Stardust a Rep 3 civilian. I roll for both of my skills as it adds an element of randomness and weirdly got Runt and Rage. 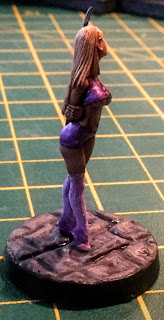 Violet Stardust (her stage name, her real name is Valda Stanislova) is the 21 year old daughter of a Russian “businessman”. She was classically trained as a dancer, and as a result is very slight and fragile looking, but underneath this exterior is a bubbling inferno. Kicked out of the Exclusive ballet studio for fracturing the cheek of her closest rival, Violet turned to other kinds of dancing to spite her overbearing father and escape from his claustrophobic love. 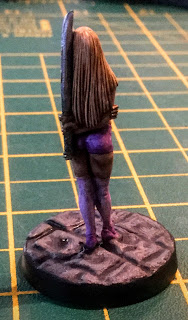 Just before the zombie outbreak started in the big cities, Violet was dancing in the club “Tits, Tassles and Tail” when a group of her father’s associates and his right hand man Vlad came for her in an effort to bring her home.  A struggle that pitted Violet and her bouncer friend Stefan against Vlad and co ended in the fatal stabbing of Stefan by Vlad, using his trademark Japanese katana “Ran’un” or “Storm Cloud”. 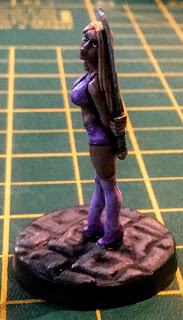 Violet grabbed Ran’un and used the ancient blade to cut her way free, wounding Vlad in the process. Still in her dancers costume she fled into the night, hitching a ride from the nearest driver.  They drove through the night but following a misguided attempt by the driver to seduce Violet and the subsequent broken nose, he dumped her at the side of the road 10 miles out of Jungville by a farm house. Cold and alone Violet needed to secure supplies for the trip into the city. Little does she know the outbreak has started.

So why stop there, here is the bat rep of day one. 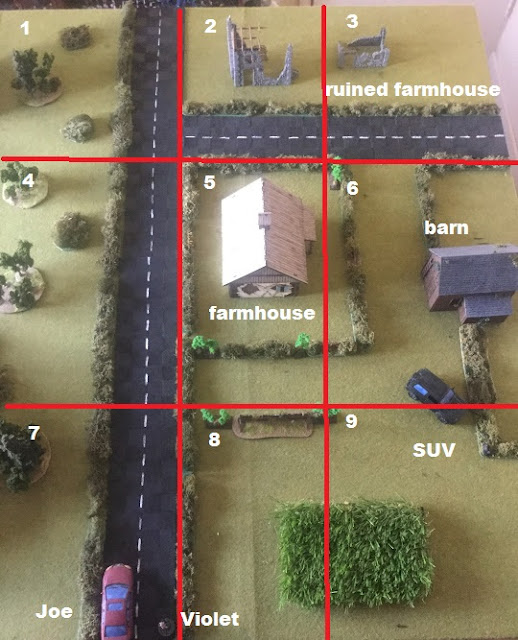 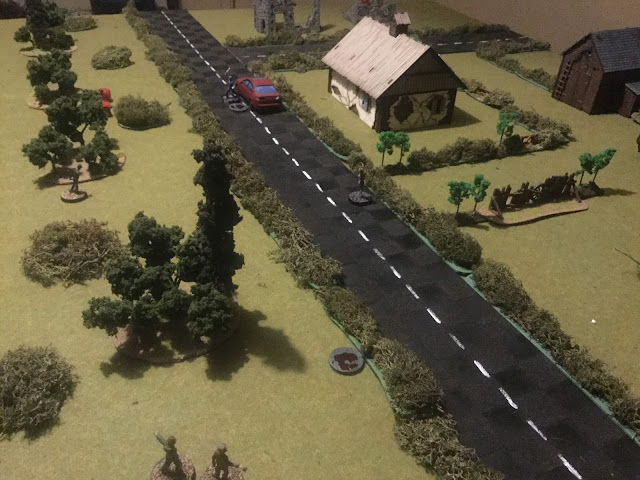 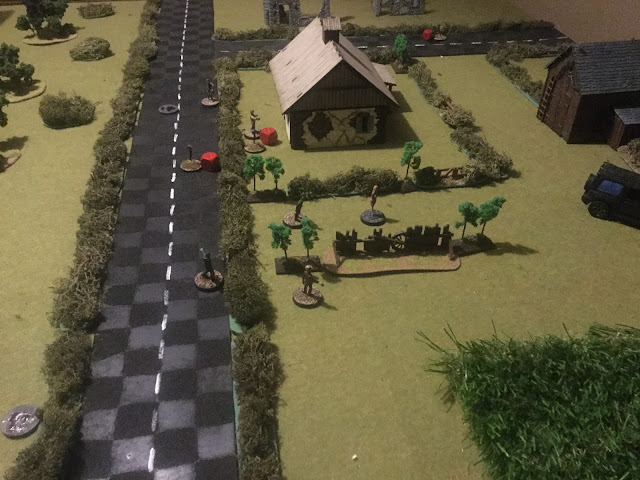 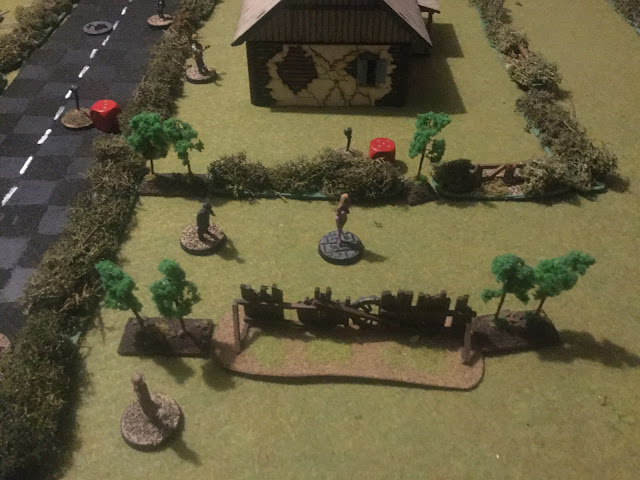 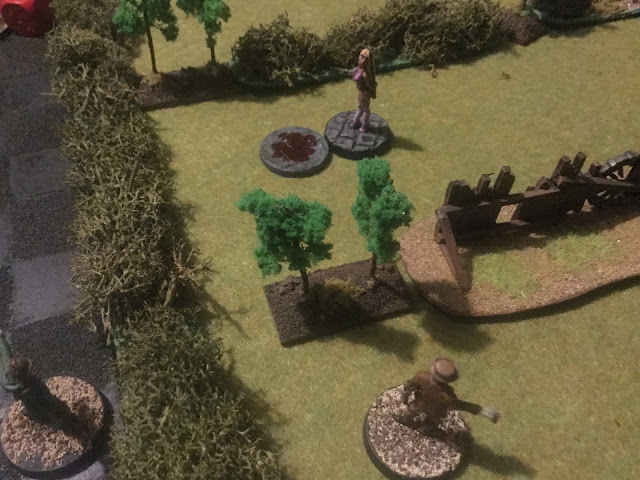 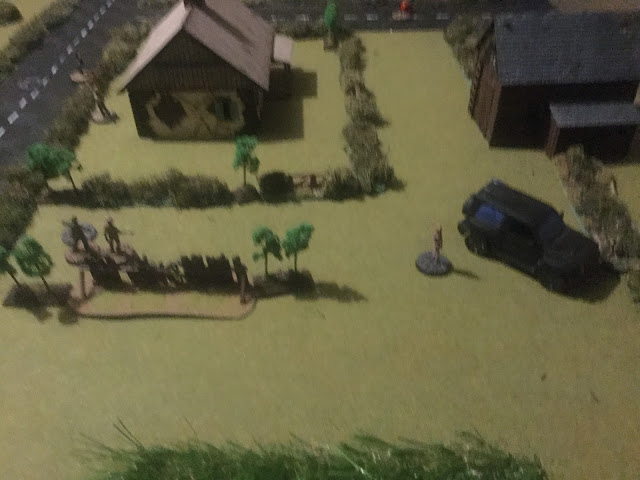 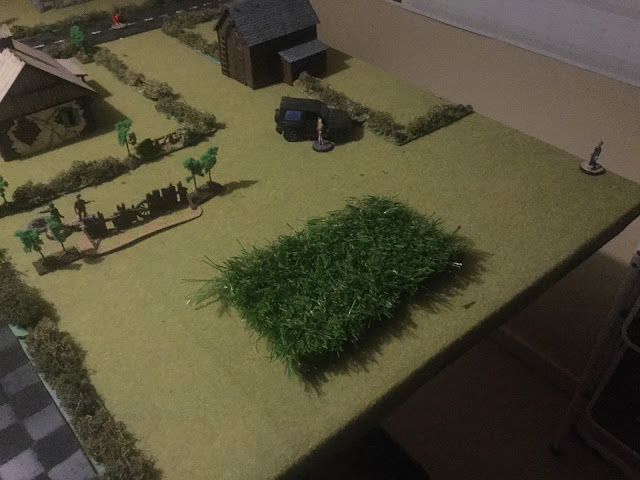 The strident sound of the SUV's car alarm pierced the night, causing a raucous cacophony of sounds from the wildlife.  Drawing Ru'un, Violet drove the ancient blade through the hood of the big car, silencing the alarm abruptly.  Gritting her teeth she swept her eyes across the yard of the old farm, cursing the gloom that caused shadows to deepen and conceal unfriendly predators.  Pulling Vlad's katana from the car she turned on her heels and headed toward the dark, foreboding structure of an old barn.  She needed supplies and fast before more of those things turned up. 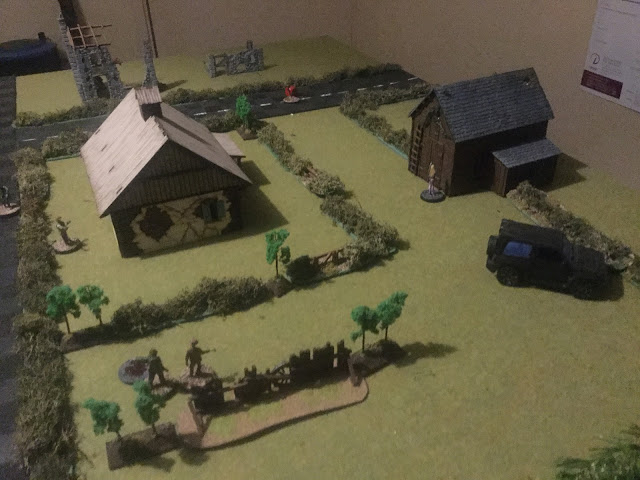 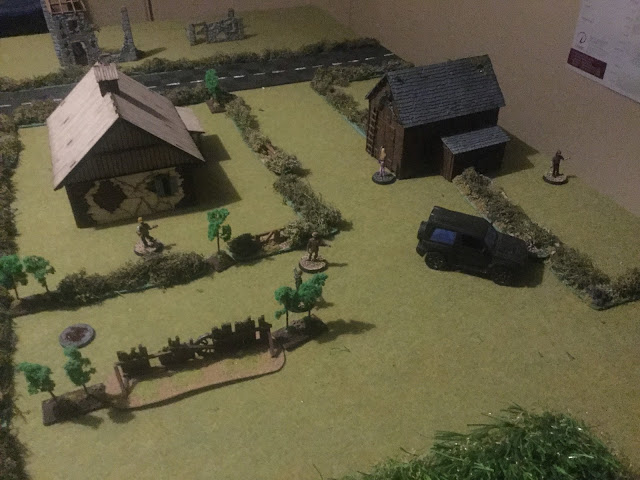 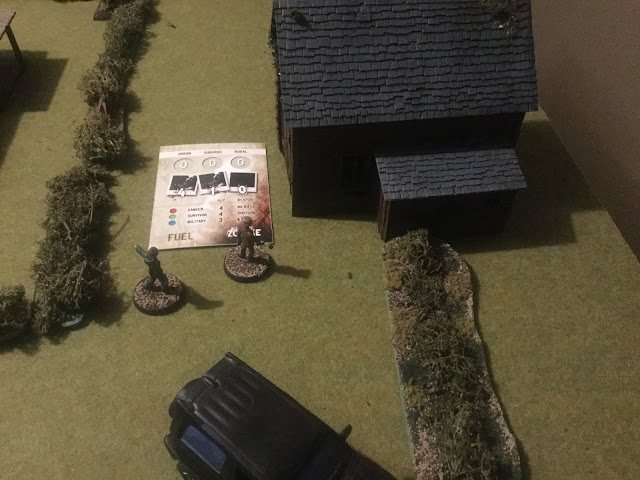 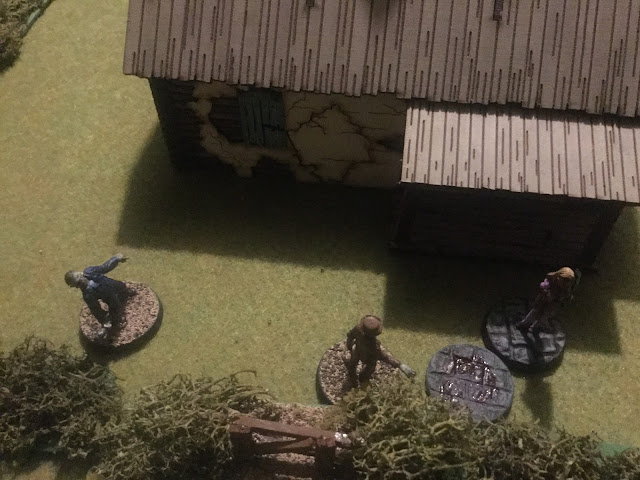 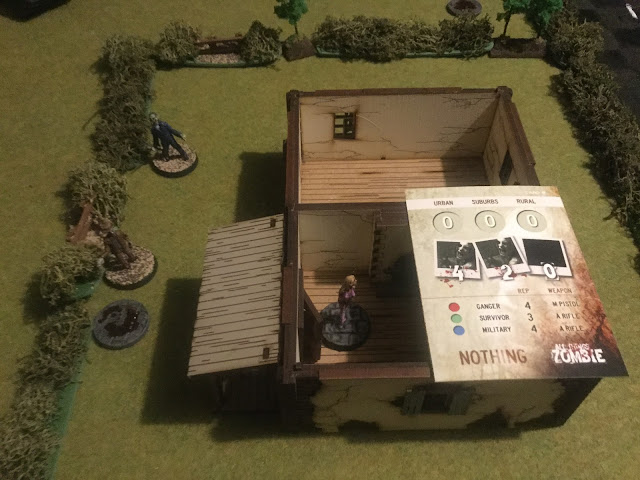 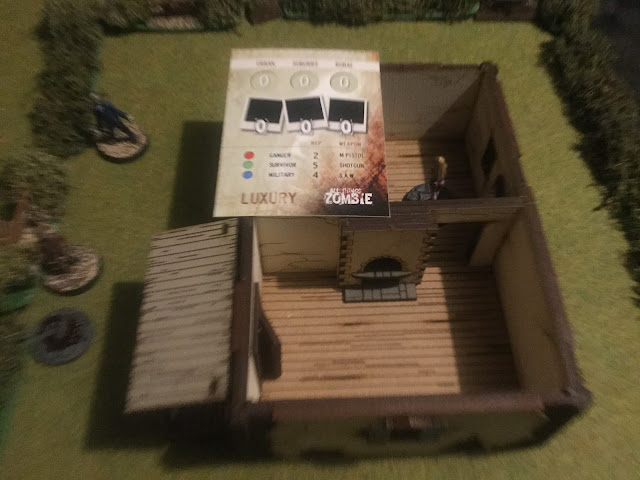 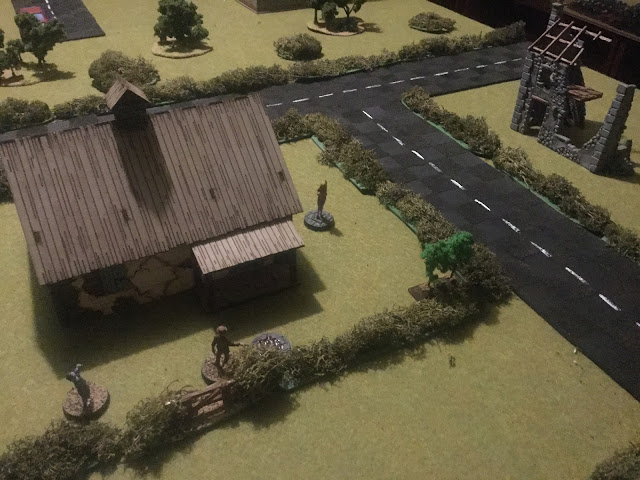 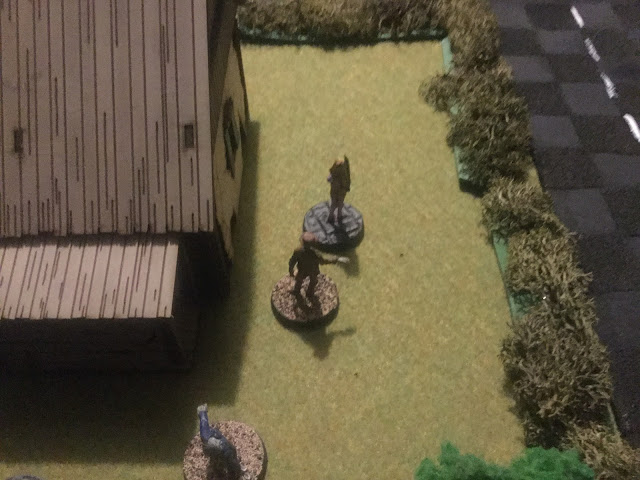 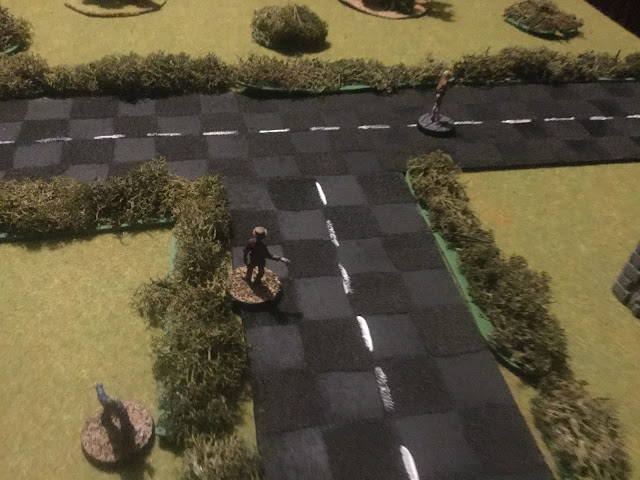 Violet put her head down and ran along the highway, glad that dancing at the TTT had kept up her cardio.  What the hell was going on she did not know! She had been studiously keeping up with current events in the hope of hearing that her father had been incarcerated for one or more of his "business dealings" but there had been no mention of some kind of outbreak! Were they really zombies? they certainly looked the part with their shambling walk and gnashing jaws, there had been a couple of times back then when they had nearly got her but thankfully Vlad's sword had kept them from getting the better of her. Pulling the farmer's jacket over her shoulders tighter (a tiny bit of guilt bloomed again for stealing from the farmer and his family) she glanced over her shoulder again.  satisfied that she was no longer being pursued she slowed her run to a fast walk and switched the fuel can to the other hand.  She would need a vehicle, food and other supplies, maybe find some people and find out what the hell was going on.....

So a successful mission for Violet, she got a jacket and a fuel cannister, shame no food but she has 1 unit of food already.  following the encounter V gets a bump in Rep to 4 and shes up and running!