Billy Ray looked over at his wife who was hunched over the wheel of the family SUV, trying to negotiate the detritus that littered the once pristine streets of Jungville.  Just two weeks ago there would have been signs of human activity everywhere you looked in the bustling residential areas. Folks mowing sparkling green lawns or putting out the trash, kids riding bikes up and down the street or playing street games.  Now the streets reminded him of downtown Baghdad during the bad ol' days when his unit kicked Saddam's ass all over the desert.  Bodies sprawled in alleyways, rubbish blew over those sparkling lawns and abandoned cars, some burnt out, were strewn across the tarmac and cobbles that characterized the once pleasant town.

They had liberated the SUV from the police impound lot the week before and had fled back to their family trailer to hunker down before trying to light out to relatives living in the country, well away from the infected who plagued the urban areas.  Billy-Ray's heart had been in his mouth when one of the dead heads had pounced upon his son and tried to take a bite out of him during the raid and he had spent the ride back, making plans and calculating how to get his family to safety ever since. They had used the week consolidating their resources and trying to rest before heading out. Looking at the kids in the back seat gripping weapons and mouthing off at each other in typical Simpson style, he was reminded of what he had to lose.  But he and Mary-Lou had discussed it and the supplies they had, had not amounted to much and they needed to remedy that in town where supplies were a bit more plentiful before bugging out.

Mary-Lou pulled to the curb as they entered the end of Lower High Street, the long road that bisected Jungville and shut the engine off.  Checking to make sure the string on his crossbow was taut, Billy-Ray placed a bolt in the firing groove and hefted the quiver over his broad back.  All around the car were the moaning, shuffling forms of the infected but there was no choice but to get out and get what they needed.  Flicking the safety off, he surged out of the vehicle and took aim at the nearest zed....

So its time for my Simpson family to get another run out before I pack away my urban boards for a little while.  Those of you who need a reminder check out my introduction to the trailer trash trouble makers here 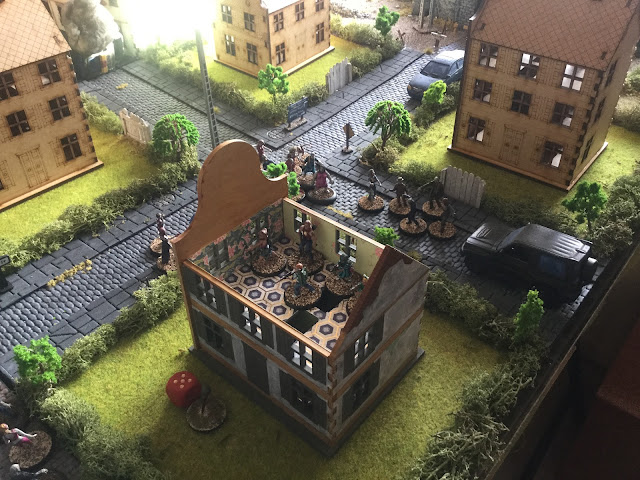 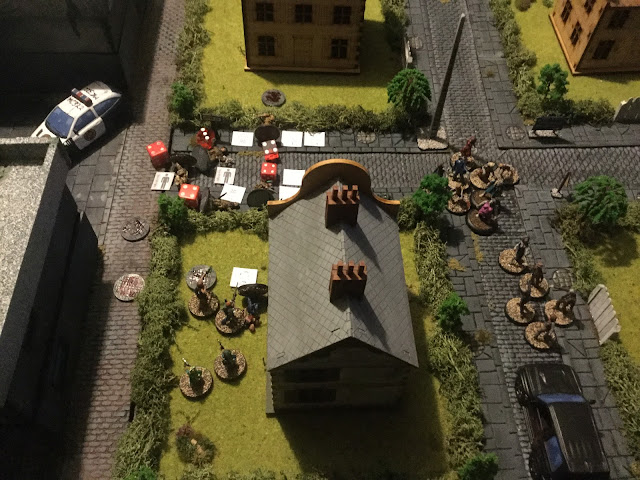 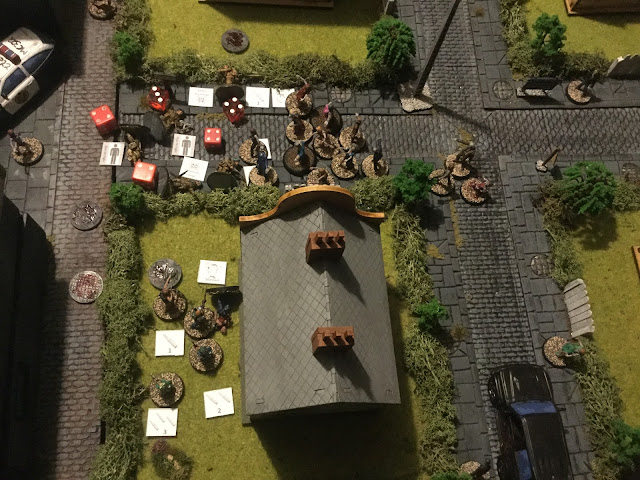 Mary-Lou pulled the arrow out of the head of the zombie that had crashed through the bushes at her and fitted it to the string of her compound bow, looking around she saw her husband on his knees, shaking his head like a dog trying to clear it after the bullet from the guardsman had grazed his temple, a thin trickle of blood marking the left side of his face.  The part-time army boys were sprawled over the road, dying or injured she wasn't sure, neither did she care! The sarge had put her family in danger by demanding that she hand over her weapons in a f**king apocalypse! the idiot and his idiot squad had paid the price by messing with the Simpsons.  Groaning from some of the guards indicated that they weren't finished, but that would soon change she thought, looking at the horde of infected Jungvillians about to descend on them.

"Should keep the monsters busy" she snorted as she gathered the twins up and got them to follow her, "Jr keep an eye on Pa and catch up when you can!" she hollered as she scooted around the side of the building, lifting her bow in anticipation. 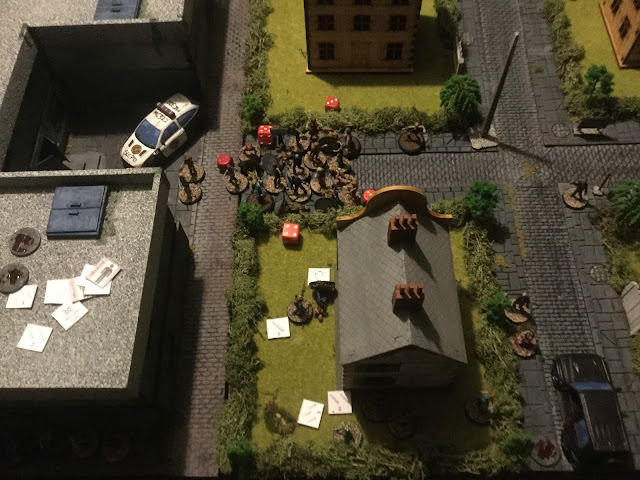 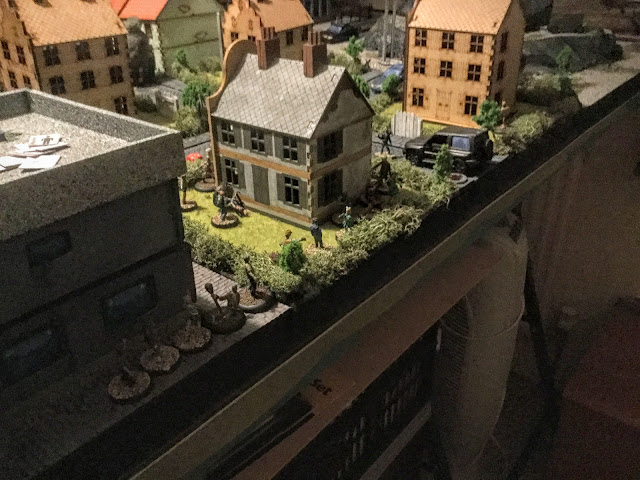 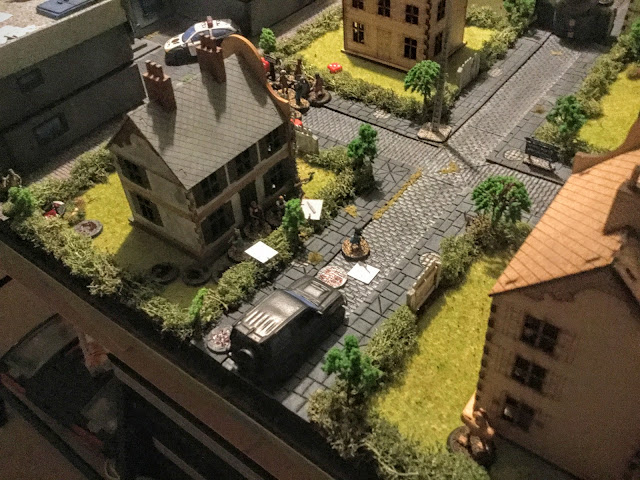 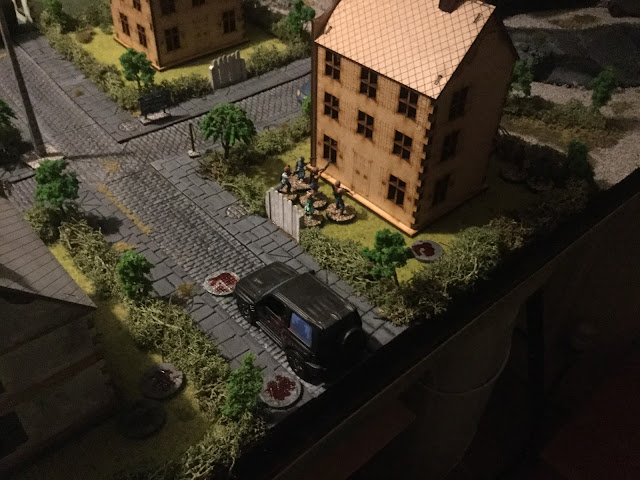 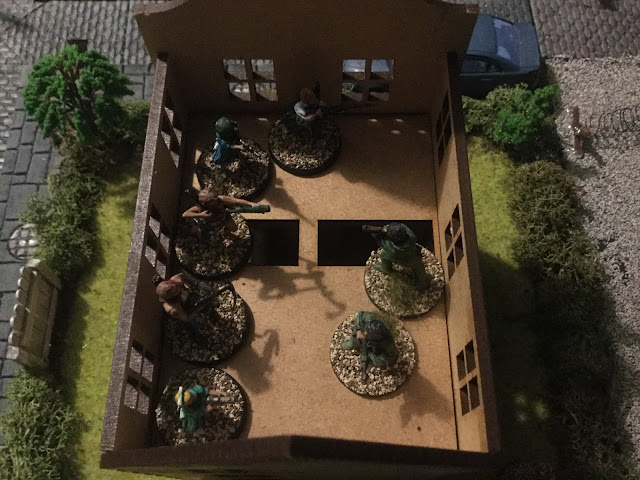 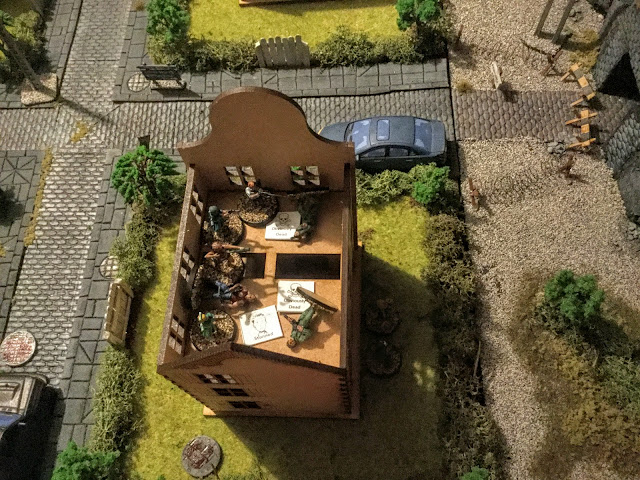 Bonnie-May looked around at the gun-smoke filled room, sprawled across the living room floor lay the two guard officers, Pa had transfixed the officer with a bolt to the brain just as the guard had dropped him with his service pistol.  Pa was on his knees with his head in his hands and trying to rub some sense back into his temples with yet another bullet track down the side of his head.  The other guard had a massive hole in the middle of his face where Bonnie had plugged the fool.  Her sister was already stripping the corpses of their body armour and relieving them of their weapons.  In the corner of the room was a large machine gun, she knew that her father was the only one capable of wielding it with any chance of success. Outside she could hear the moaning of the zeds as they shuffled nearer, drawn by the muffled sound of gunfire from inside the town house. 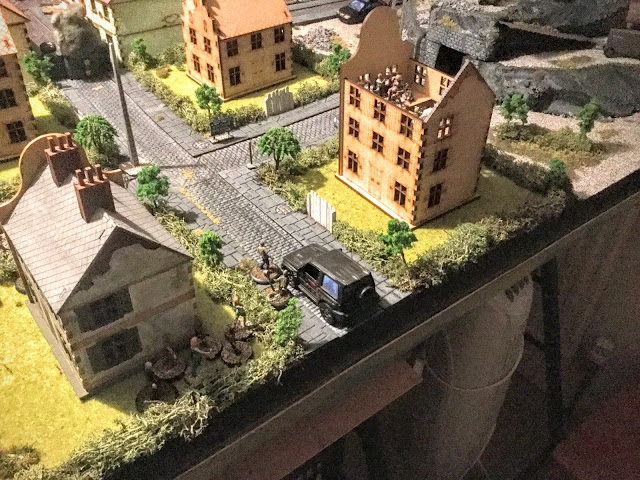 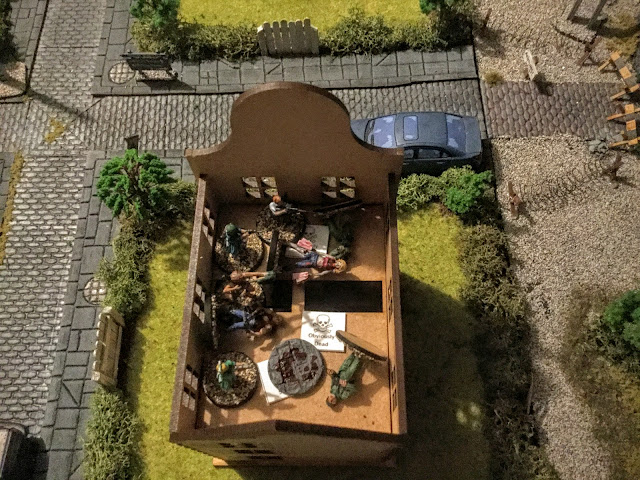 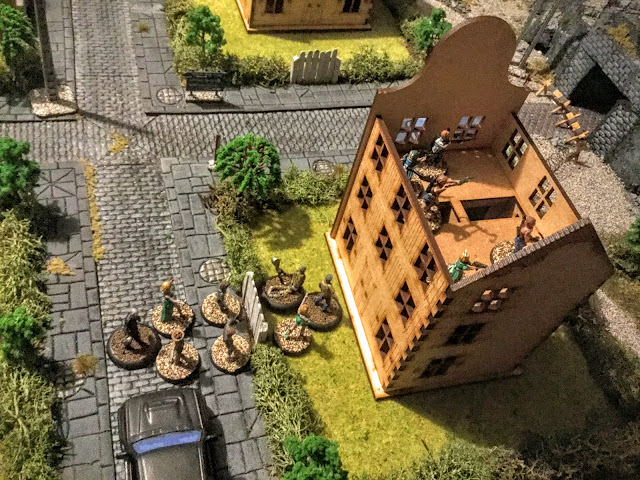 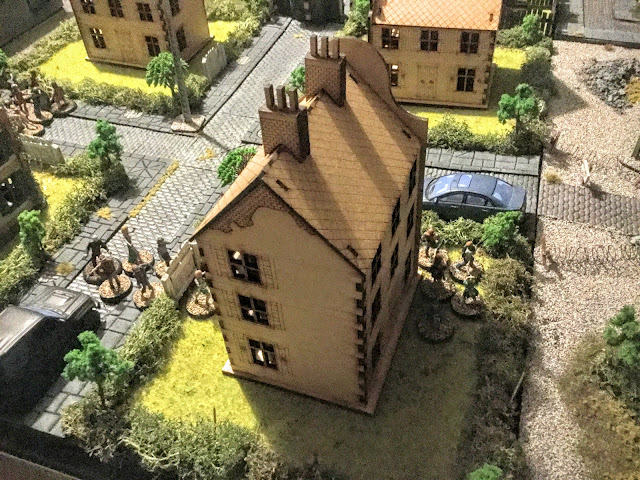 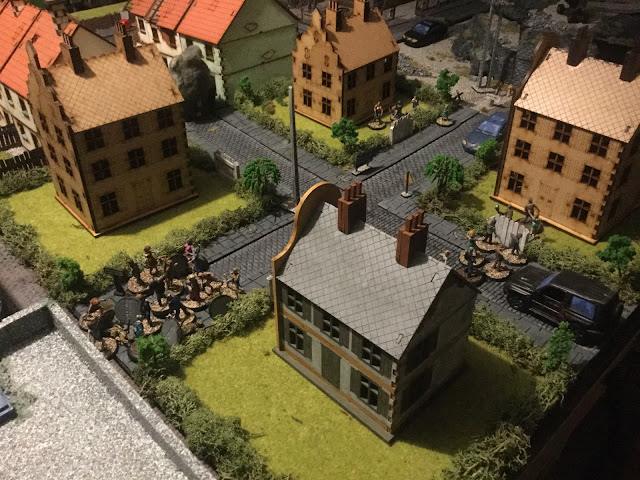 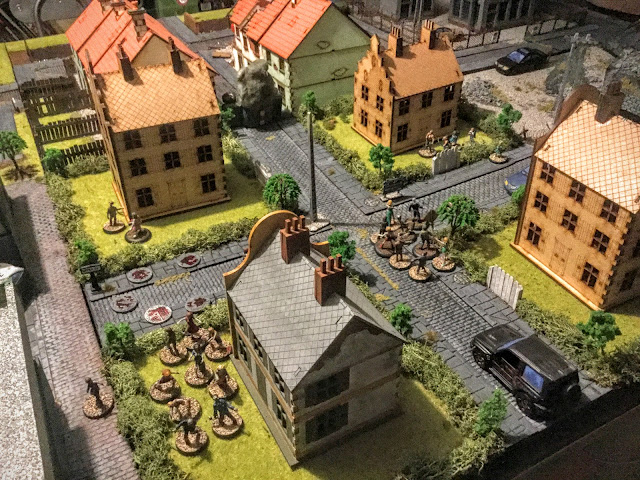 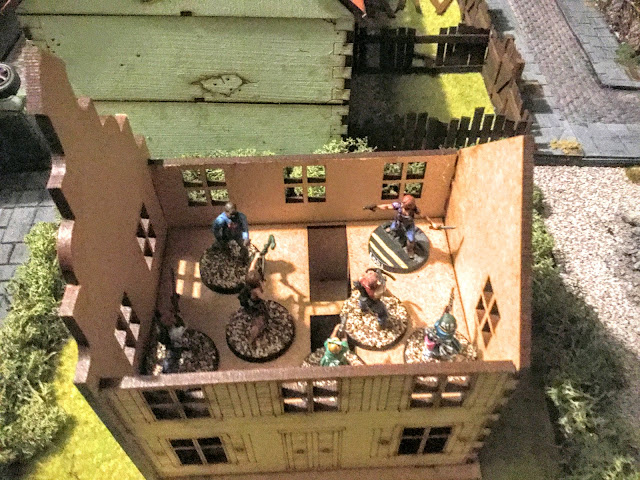 Bobby-Joe aka Junior watched the gang members slip out of the back door and leap nimbly over the hedgerow that bordered the property before disappearing from sight.  The zombies were stumbling closer out front while the family searched the ground floor of the town house, but it looked like the gang-bangers had stripped the place bare.  Ma's weak charm offensive against Leroy had backfired with his girlfriend Lori snarling at Mary-Lou and refusing to hand over any food. So now they needed to get out of here and search elsewhere for their supplies....