I was playing a recent series of ATZ games, that will be featuring soon on this blog have no fear :-) when I was struck by how many gaps i have in my support cast.  What i mean is, those folks that appear following the resolving of PEF markers or the searching of a building or random event.  I thought i had loads, turns out that I was struggling to cover quite a few different weapon combos and unarmed (or poorly armed) civilians.

To remedy this oversight i dived back into the comforting and now familiar sprues of the WGF "Men" and "Women of the Apocalypse" box sets.  These versatile models have helped me enormously in bringing the apocalypse to my games table.  So without further ado I give you..... 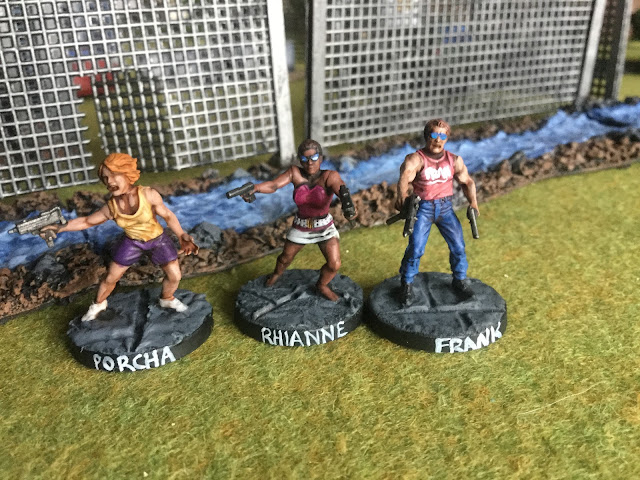 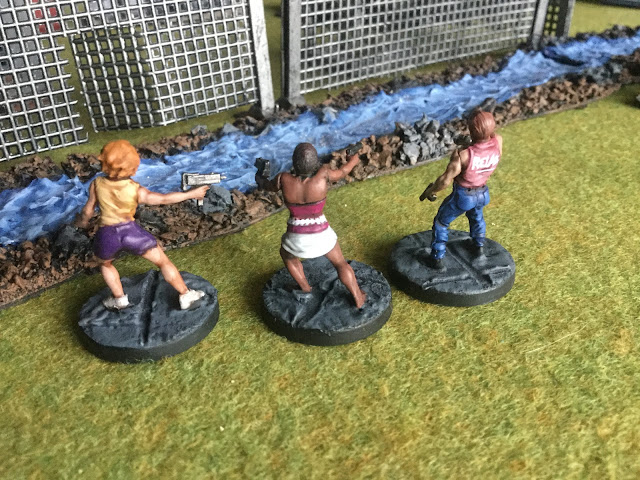 First up i give you the SMGs (and possibly my fave) group.  This was a weapon I haven't really represented at all, so i needed to remedy that asap. From left to right then we have Porcha, whose parents thought they were giving their only daughter a leg up by giving her a "posh" name, only to realise that their poor spelling would leave her sounding like a cheap copy of the famous car..... Next we have badass Rhianne she was dragging her 14 year old son from a crack house when the outbreak started, after an infected drug addict attacked and killed her son Rhianne grabbed some of the guns lying around and shot everything moving inside the building in a fit of grief.  Lastly we have Frank, who was at his girlfriends house when the infected broke in and tore the place up.  Grabbing the nearest items of clothing before running out the back door and abandoning his girlfriend, he didn't realise until after that he may have got the wrong shirt...... 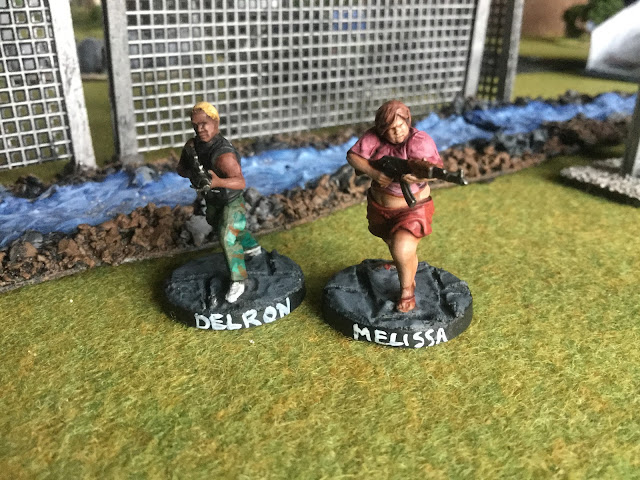 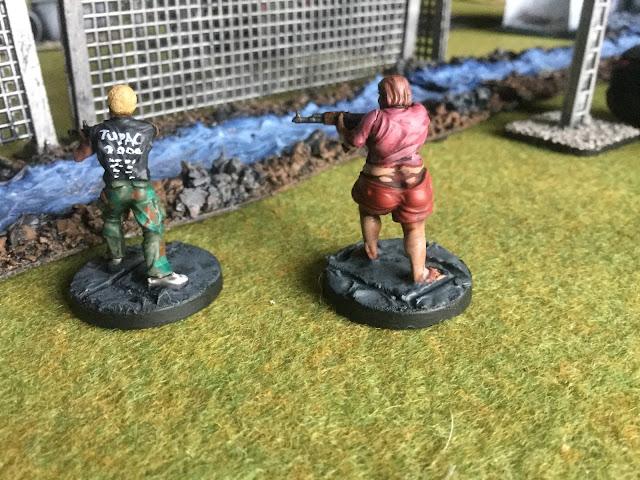 Next up is the assault rifle group.  Again not very well represented by me in the game despite the obvious advantages of the weapon. Both of these were straight builds so from L to R then we have Delron - "da Big D" is a gangsta wannabe, brought up on 1990's movies and drinking in the East LA gang culture that glorified gun violence, actually he is the only child of a middle class family and is the manager of the local cinema.  He always manages to get it horribly wrong as shown by his counterfeit Tupac T-shirt showing the rapper's last tour as being in 2000 (Tupac was shot in 1996).  He is dressed in camouflage combat pants and sporting an AR he dragged off a poor deceased soldier on Day One of the outbreak.  Melissa is/was a retail assistant at her local "Sprawl-Mart" after the outbreak, Mel grabbed an AK47 from the "sporting goods" section and blew away her boss (who may or may not have turned) before heading off home. 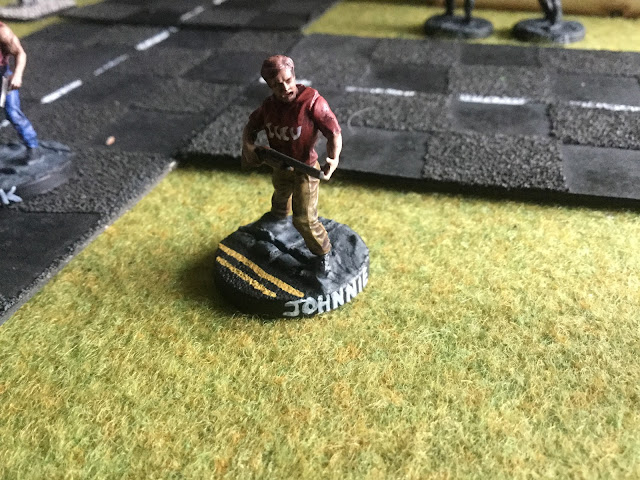 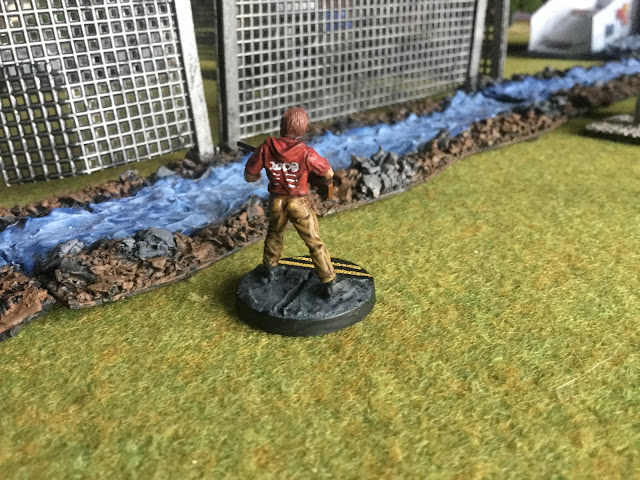 Next up is Johnnie, I realised that although I have lots of women touting shotguns but not very many men. Johnnie required a weapon change and I wanted it to have a little more movement so I tried to get it to look like he was slapping the barrel of the scatter gun into position. 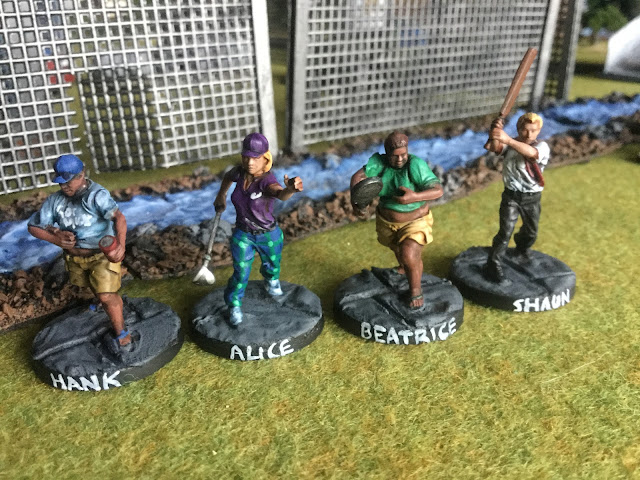 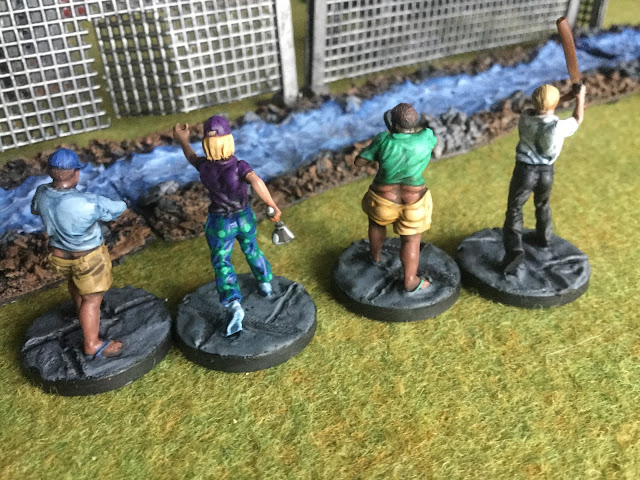 Last up is the civilians, I needed four more for my games and have come up with these guys; from L to R we have Hank - a beer swilling B ball fan (I forgot to paint the D on his ball cap - oops).  Next is Alice - straight from the golf course she sports the latest in tartan golfing trousers.  3rd in line is Beatrice - a house wife and wielding a skillet like a champion. Last but not least is a familiar face (perhaps) Shaun is the deputy manager of a white goods retail outlet, a very ordinary and very unlikely hero!

Email ThisBlogThis!Share to TwitterShare to FacebookShare to Pinterest
Labels: ATZ