Thanks to all the guys who commented on my milestone post last time, I'll be drawing a name at the end of the next week March 19th so if you want a chance at two vintage GW figs comment on the post by then.

I've been using the wargames factory male and female boxsets a lot recently.  The versatility of the sprues have plugged a lot of gaps that i had in my post apocalypse model collection - cops, gangs, survivors and my recent TWD project.  Which leads me to.... 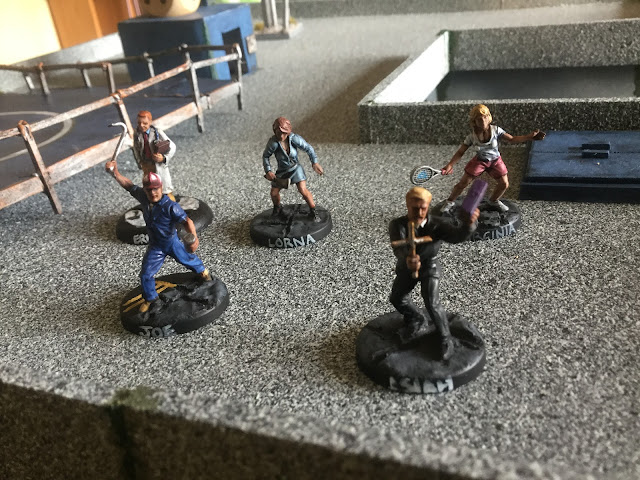 Particularly in the early days of the apocalypse, civilians are quite predominant in games and pop up in all situations. So i thought i would go for a lot of different looks and try to keep the firearms to a minimum.  Instead I would try to represent people getting caught out by the speed in which the contagion spreads, hence tennis rackets and bibles and crowbars being more prevalent than automatic weapons. 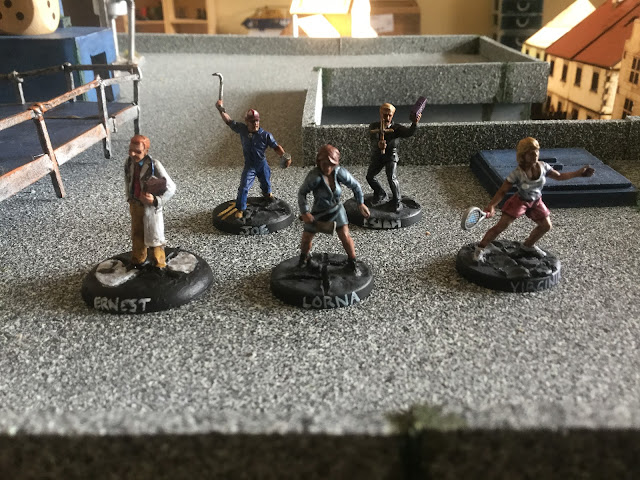 So from left to right we have Ernest, who was a gift from one of my blog buds and gaming friend Damon.  I'm not sure where he is from but I repainted him and put him to work in my hospital project, hence the tiled floor.  Dr Ernest is a medical researcher specializing in haematology and virology.

Next is Joe (back row), Joe was a straight build from the WGF and painted up as a mechanic, a typical blue collar worker he has a thermos cup in one hand and a tool of the trade in the other.

Next is Lorna (front row). Lorna is a restaurant owner who quickly grabbed a cleaver to defend herself when her head chef went crazy and tried to bite her.  Dressed in her smart business suit she is another straight build from the WGF set.

Behind her and to the right is Father Isiah, Isiah was a lost soul constantly questioning the validity of his faith until the apocalypse came along.  With a renewed determination and zeal he has taken up crucifix and bible and is taking on the ranks of the undead.  The WGF sprue contains many things but not a crucifix so i had to make a simple cross out of plastic sprue and replace the pistol hand with it.

Lastly on the far right is Virginia, Virginia is the spoilt wife of a minor local celebrity.  Her life was just how she liked it with lavish parties, shopping and daliances with her tennis instructor.  The apocalypse is dashed inconvenient and cut short the eh hem "private lesson" she was receiving....

so there you have it, more to come from these boxsets i'm sure
enjoy
dGG

Email ThisBlogThis!Share to TwitterShare to FacebookShare to Pinterest
Labels: ATZ