I've been teasing you with some of Silvermoon Trade Syndicate (STS) miniatures that I've painted up recently. The following models all make up the STS starter set and form a core of characters that would enhance any warband, so I thought it was time to introduce you to the sinister Oyabun (Japanese translation - The Father) behind the emergence of the latest Bushido faction from da Grotto. Accompanied by his bodyguard, Oyabun Harukichi controls "The Golden Kami" a notorious gambling den in the heart of the pleasure district of the trading city of Jima. Here is the blurb from the GCT website...

A seasoned and cunning tactician in all affairs. His razor sharp mind and unflinching resolve make Harukichi an exceptional businessman and leader. Those in his gumi display an unshakable faith in his decisions and follow his orders without question or pause. Those who follow the Five Fortunes believe that you make your own luck and this is particularly true in Harukichi’s case. It appears to his enemies that should Harukichi will it his followers are able to achieve the most unlikely feats, whilst their own trip, stumble and flail wildly.

With his "Leadership" skill his minions can use his Ki value when making opposed Ki tests such as "Fear"- very useful.  Tactician will help me decide who goes first in each turn and allow me to control the game more easily.  His Ki feats "Cheat Fate" and "Fortune's Favour" reflect his worship of the Five Fortunes and the Luck Kamis (more of which later in the post) and will allow me to reroll dice or even substitute results with predetermined ones! 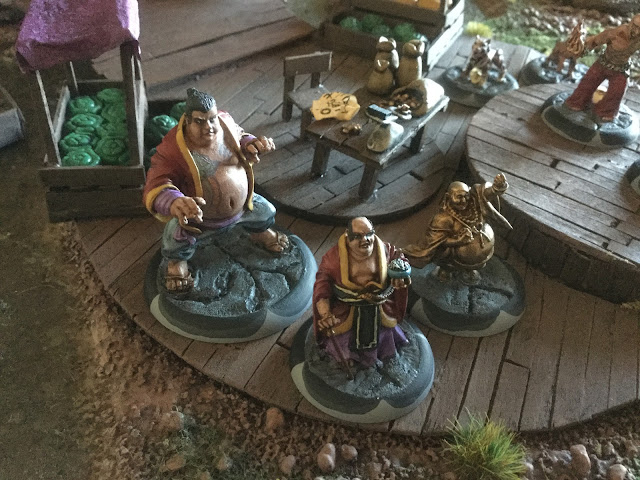 Also in the photo is Harukichi's bodyguard, the giant Buto - Manu...

This giant Buto is the personal bodyguard of Harukichi and was selected for obvious reasons. His prowess in the Jumo arenas quickly attracted attention, it was clear to most he was destined for a top position within the Syndicate, and he has not disappointed.

Butos are a race of giant humans native to the island of Wakasu, which also is home to the city of Jima.  A warrior race, the Butos are masters of Jumo - the martial art developed specifically for the size and strength of these gargantuan men.  Renowned for their excessive eating and drinking binges accompanied by bouts of Jumo, these giant warriors were perfect for the Oyabun's of the STS to recruit to form the core of a private army.

Obviously my tattoos for Manu aren't as bright as the official version, i'm still trying to get to grip with the whole tattooing thing with miniatures, none the less I'm pleased with the way he has come out.

Manu is an excellent bodyguard, relected by his special trait that can allow me to switch places with Harukichi if he gets into an unwanted melee.  He also has "awareness" and "sixth sense" which means he cannot be surprised by lurking ninjas or other nasties.  With "toughness", "Umbrella Block" and a large wound track he should last a good while in melee and although he only has "Fear (3)" it should mean that every now and again he should cause an attacker to lose a dice in combat.

Next up are Wasapu and Senpu.

Wasapu: It is unclear exactly where the Silvermoon source their knowledge of new technologies. Whether through a shrewd business deal or more nefarious means the Syndicate acquired the intricate, rapid, reloading mechanism showcased in their repeater crossbows. Wasapu wields this fearsome weapon with great skill and accuracy. Using the finest Minimoto steel, his bolts find the weak points in even the finest armours. On top of this Wasapu can identify the weak points of even the toughest beast.

Wasapu is as described above, armed with a repeating crossbow he provides long range support for the faction.  Senpu, who doesn't get a mention in the blurb is a shatei - "Younger Brothers", a rank in the the Yakuzu hierarchy and one that has been bought into the Jwar universe.  A low level enforcer for the STS wielding two blades he can protect the interests of his Oyabun.

Wasapu will be used to snipe my opponents powerful characters to reduce wounds or, if he can, take out support troops in a single "Strafe".  Senpu will mainly be used to run interference or take/hold/interact with scenario objectives.

Tsubaki - one of the Roses of Jima, a secret organisation of women controlled by their own Oyabun the "Queen of Flowers".  Tsubaki has joined Harukichi on behalf of the Queen in the spirit of co-operation.

The only thing to match the beguiling beauty of the Roses of Silvermoon Syndicate is their athletic physique. Experts in the arts of manipulation and misdirection, they pass through their unsuspecting enemies waiting for the moment to strike. Once the veil of safety drops Tsubaki’s opponents have to contend with their foe dancing rhythmically in and out of combat, whilst they swing wildly at thin air. This is not Tsubaki’s only trick for she, like many Roses, carries an exotic mix of flower petals which, when blown into a victim’s eyes induce blindness.

Tsubaki will fulfill many roles for me, with her disguise effect she can waltz passed weaker minded enemies and complete scenario objectives.  She can also waste enemy activations by causing stupidity and with her blinding bomb. 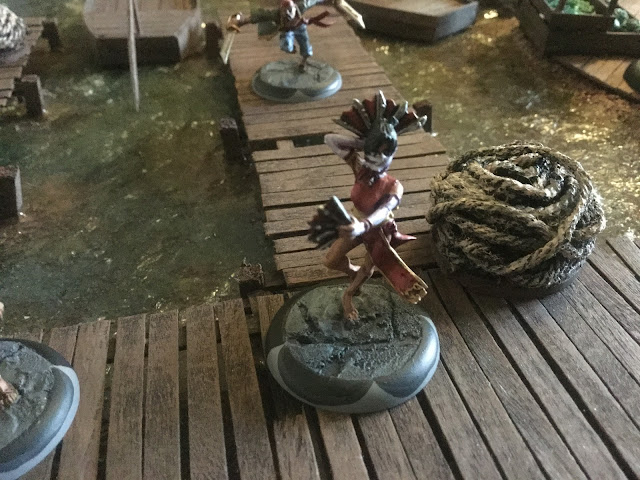 So that's the starter set for the STS faction. Not my best painting but good enough to take on the road for tournaments. 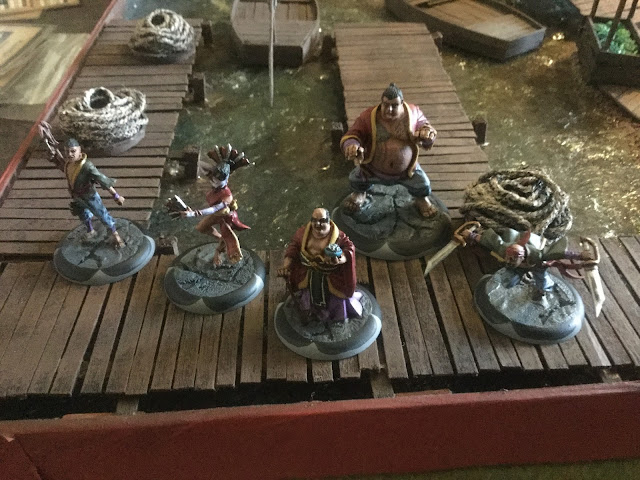 Now I know he's not part of the starter set but you've seen him as part of one of the photos above and i think is an integral part of the STS ethos, so here is the Luck Kami - Rakki.

Of the Five Fortunes the Rakki is the embodiment of Luck. They favour those that take fate into their own hands, gifting or cursing those as they see fit. The jolly laughing Rakki are unsurprisingly found in proximity to the luck houses of Jima, chuckling away as fortunes are won or lost on the roll of a dice. The Silvermoon can only benefit now that these unusual Kami have chosen to favour them with their talents.

Rakki as you can see will be able to influence/control dice rolls for my faction and will be quite useful.  He also has an alternative profile - Genzai, who allows rerolls so may be even more useful for the warband. 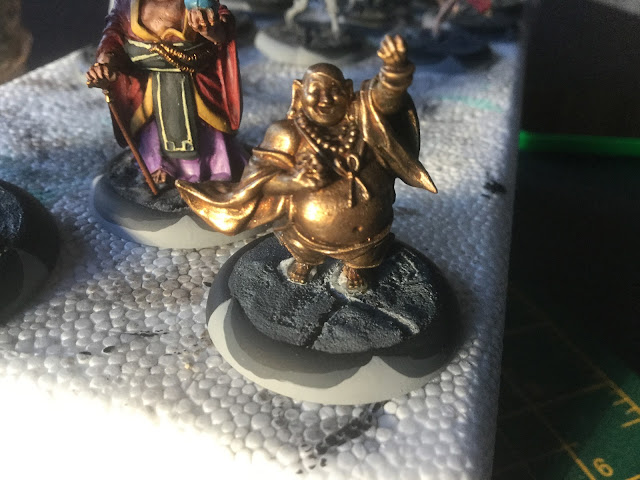 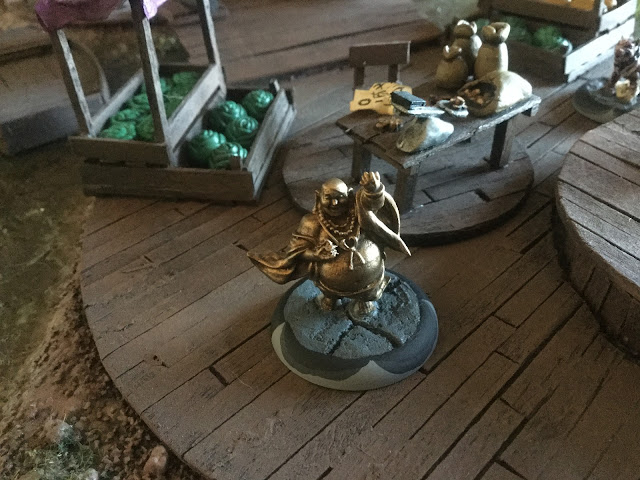 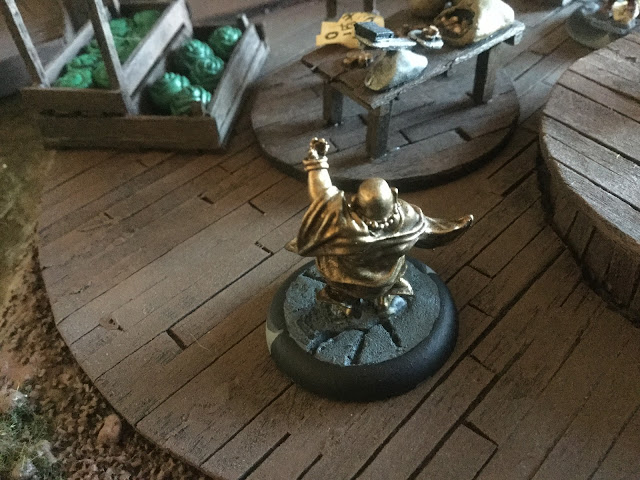 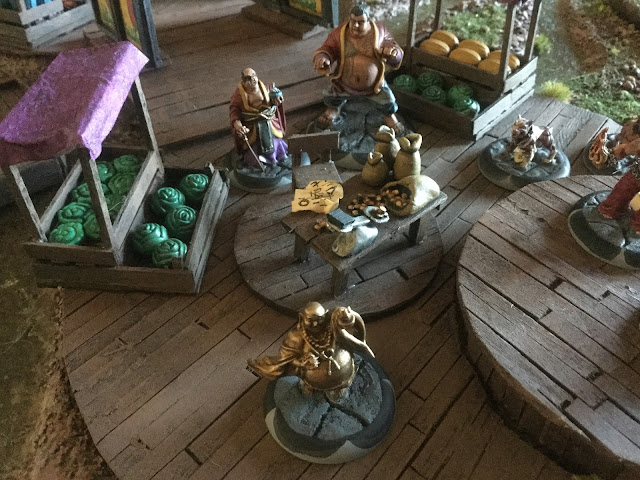