I'm going to hand you straight over to Chris "Naps" Thorne who has kindly penned this post and hopefully quite a few more... 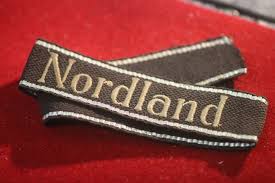 So before we start on the fun stuff I would just like to say a huge thanks to Da Gobbo for allowing me to document this new project of mine. Hopefully it will turn out a worthy addition to the Grotto. A true gentleman and a scholar is Da Gobbo.

I first picked up a copy of the Bolt Action rules when it was released. I hated them. But after a couple of games I changed my opinion of them and for a couple of years I've been toying with the idea of getting something painted.

I have a fascination and interest with the last year of the war and in particular the final horrific months on the eastern front. So I decided I would paint up a late war German formation but I didn't want to do something generic. I wanted to do some research, have a variety and mix of units and get this is accurate as possible.

Last year I read a book on Swedish volunteers in the Waffen-SS serving in the 11th SS Panzer-Grenadier Division "Nordland". Nordland ended the war fighting in the ruins of Berlin along with various other formations. With a bit more research I found a date and a location where I could pinpoint a variety of units operating in close proximity of each other.

So this Bolt Action platoon (I will call it a Kampfgruppe) is taken from the reinforced Platoon army list and it will represent the units desperately fighting in the vicinity of the Potsdamer Platz and Reichs Chancellory on the 29th and 30th April 1945. It will include elements of Nordland, Panzer Division Muncheberg, Kriegsmarine, Volkssturm and Hitler Youth. In game terms I think it will come in about 2500 points.

What I hope to do is paint a unit/vehicle, describe its history, personalities (briefly as this a gaming blog) and combine with some real photos for comparison. Hopefully it will be something slightly different and of interest and I would love to hear people's thoughts and feedback. So that's enough from me for now. I have a large box of minis to sort out, four types of camouflage clothing to work out how to paint.....catch you soon and happy gaming!!!!!

thanks Chris, lots more to come on this project I'm sure and I for one am really looking forward to seeing what he comes up with.