This is the final part to my series of narrative batreps from my tournament in November. As fun as they are to write, it's now been too long since the games and with only pictures and my poor memory I can't actually remember the detail of the game, so this is more of a final chapter to wrap up the series rather than just leave it hanging.  These are the previous episodes here, here, here and here.

Akari, Temple Master of Ro-Kan glided swiftly down the dimly lit corridor that led toward the Master’s sanctuary.  His quick mind churning through the mass of thoughts, information and possibilities and forming stratagems. The Cult of Yurei’s rise in the mountains of the Tengu and their subsequent attacks on the ancient one’s allies - the Hill tribes was a part of an elaborate plot, no doubt hoping to upset the delicate balance that the Temple of Ro-Kan fought so hard to maintain.  The monks of the Temple had to respond to this threat and fast,  before the playthings of the evil Yurei caused irreversible harm. Akari knew though, that his spiritual brothers were less likely to want to involve themselves or the Temple in the fights of others unless he could convince them of the danger to the balance ahead.

Darting through the shadowy archway leading to the private meditation chamber of the Temple masters, the diminutive Tanuki formulated his arguments.  Bowing to the statues of the great Kamis in turn, he dipped his paws in the temizuyu - cleansing them of the dust of the road before dropping into a simple prayer pose. With practised ease he calmed the turbulent thoughts and entered into a state of meditation, allowing him to sublimate the chaos and find a clear path. As he sank deeper into the meditative state a familiar presence made itself known, slow and thoughtful, steeped in ancient wisdom – Ekusa. The venerable Master, the eldest of the order of Ro-Kanese monks and currently several leagues away chasing Jung shadows had astrally projected himself into the meditation chamber.

“Master Akari, you are back from your mission to the mountains of the ancient ones, how fair the Tengu?” The sound of Ekusa’s voice soothed the troubled Tanuki, allowing him to show the elder monk the recent events as if he had witnessed them himself. The destruction of the Conduit and how the brave band of monks had pushed the darkness away at the last minute to secure the remaining Idols. The brief battle at the the Garden of Six with the Tengu and the skirmish in the passes of Ro-Kan with the Prefecture patrol, all this passed through Akari’s mind within seconds and Ekusa’s with it. “Aiko grows strong does she not?” Without waiting for the Yokai’s answer the Master continued, “I understand your concerns Akari, yes and indeed I share them. The Cult grows strong, while the forces that would oppose them are scattered and dispirit, squabbling amongst themselves like children. The Prefecture’s ruling clan – The Dragon are spread far and wide trying to contain the troubles and keep the Emperor’s peace, the Snakes oppose them at every turn and the long dead Eagles show signs of life yet and gather support for their rebellion, even the long forgotten Jung have returned much to our people's sorrow.”

“Master Ekusa, what would you have me do? The Balance is at risk and the fate of the Isles is on a razors edge.” Akari, tired from all the recent battles found his focus wavering and struggled to hear the faint reply from the venerable old man.

“The Emperor must know what is happening in this far flung Prefecture.  The path is clear, a message must be sent, more aid is required.  Send for the Imperial guards!”  With that last statement, the connection was broken and Akari felt his mundane senses returning. Times must be desperate indeed if Ekusa suggested sending for Imperial help! The Dragon clan would be extremely angry at the involvement of the Emperor’s personal army, the loss of honour would be extremely hard to bear and could incite the rebellion they so rightly feared. But the consequences of doing nothing would be much, much worse! The playthings of Yurei were getting more and more powerful and it wouldn't be long before a disaster happened. In fact…..

That thought was interrupted as Kenko came running through the archway at an unseemly pace. “Master Akari,” the newly arrived monk said, forgetting to bow in his haste, “come quick, the Cult has come to the Temple.” Looking at the horror in the younger monks face, Akari followed Kenko out of the chamber. “Monsters approach master, hideous beasts and Yokai.” The normally unflappable Kenko hurried to the window, pointing at the wall of unnatural looking fog as it rolled over the rocky ground surrounding the Temple walls.

Akari stared out at the approaching nightmarish beasts, familiar Nezumi and swarms of fat, black rats. A massive dark Kami at least ten feet in height with razor like fingers dominated the warband, towering over the form of a fat boy banging on a drum – Souta, the boy from the Conduits. A creeping Gaki, spewed the foul fog from its gaping maw, masking the approach of others further back. So be it, he thought to himself, the message must be sent, his small band of righteous brothers must hold off the hoard of evil in order for that message to get through. “Gather the younglings and their companions Kenko, we must prevail this day for the sake of the Jwar Isles and the Balance that we hold so dear!” 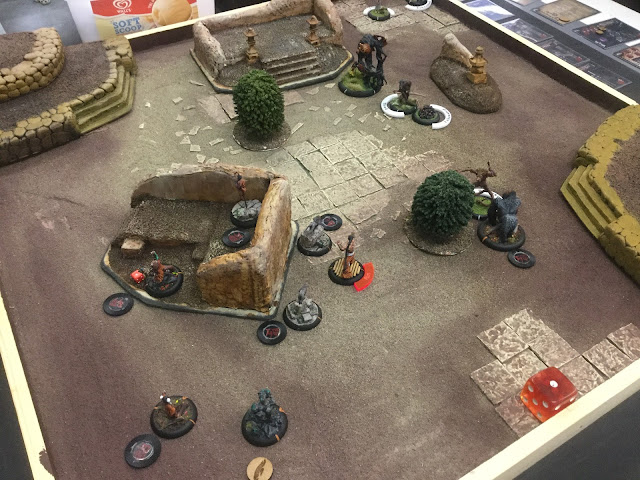 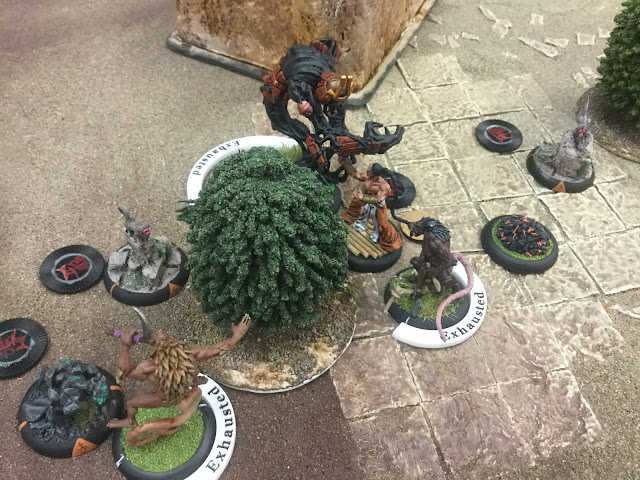 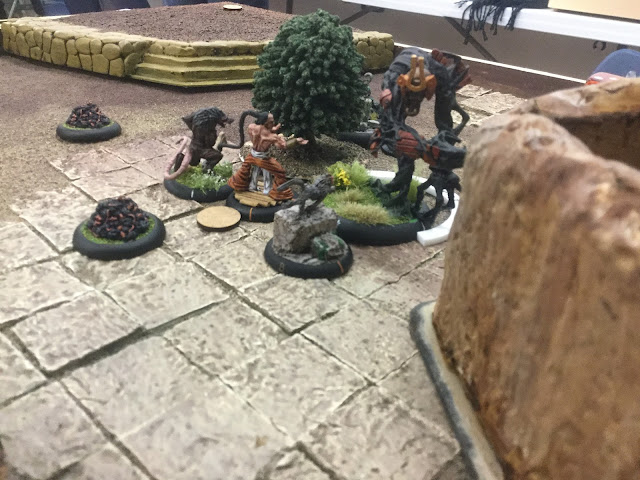