About 3 weeks ago, I was idly surfing the inter-webs looking for nothing in particular when I came across a picture of an Asian- themed terrain board for a samurai skirmish game that for the life I can't remember...  but the board, man the board was beautiful.  Star of the show was some cherry blossom trees which were just perfect, certainly perfect for my Bushido boards!  So I set forth with my feeble web-fu skills to see if I could find some suitable trees.  After a frustrating hour or so, all I could find were architect's trees that would have set me back £9 each - no way!

However not to be deterred I turned to the dark side and fired up e(vil)Bay and found a supplier in China that would sell 10 for £4.23, whats more P&P was free!  Now I was very cynical indeed.  Although I bought my excellent bamboo from China I had also bought some model trees that were the size of shrubs (relatively speaking). But at that price I thought it was worth a punt, so I clicked "Buy it Now!" and forgot all about them.

Fast forward to this week and a package from China arrived in da Grotto.  Still fairly cynical I opened the pack and was very, very pleasantly surprised to find some proper sized trees... 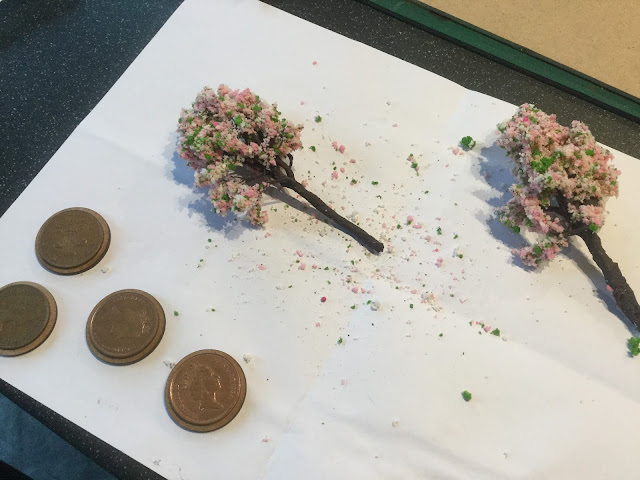 The trees are twisted wire trunks and covered in a filler (spackle) type coat and flocked with a mix of green, white and pink sponge and they measure a good 9-10cm high.  Shipped flat they just require a little tweaking to open the wires up to produce a good spread of branches and limbs. 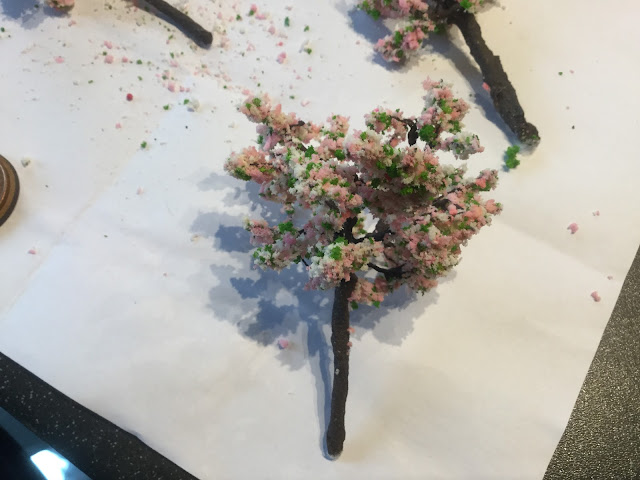 When you do tweak out the limbs, I suggest putting some paper down as they did shed quite a bit of the foliage! Thats ok though as they have loads, probably too much as they expect some to come off at this point.  Once I unpicked mine to the point I was happy, I collected the excess foliage and popped it to one side for later use, as you can see there was quite a bit.... 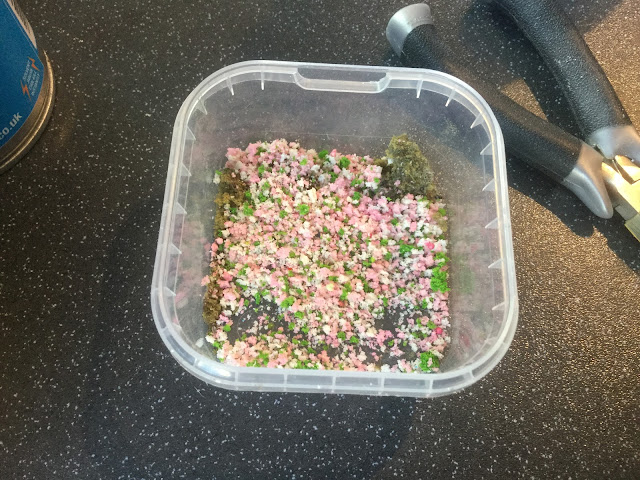 I then mounted the trees on bases, I wanted two different types of bases, some smaller ones so that they would fit in tighter spaces and some standard sizes for woodland areas etc.  Too hand I had 4x 30mm rounds which I added a 2p piece on top of for some extra weight/stability and 6x 60mm rounds. So out came my hot glue gun, I suppose I could have pinned them for extra support but there really wasn't any need as the next step would provide all the support I really required.  Inspired by a video by the terrain guru that is Luke Fellows (which you can watch here) I used the hot glue to layer at the base of the tree to give it some more stability and then drag the gun toward the edge of the base to create a root network. 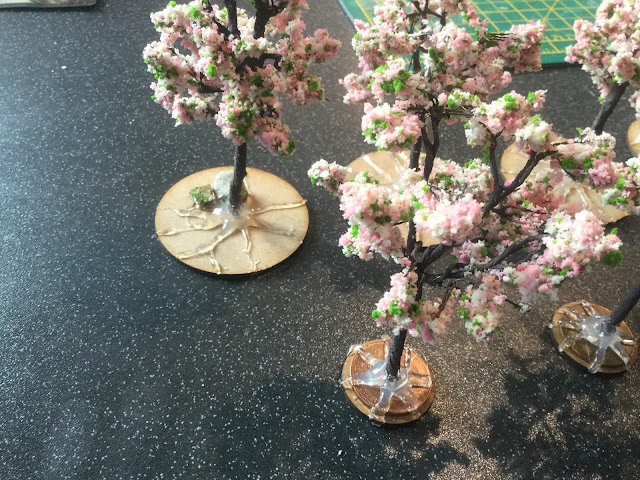 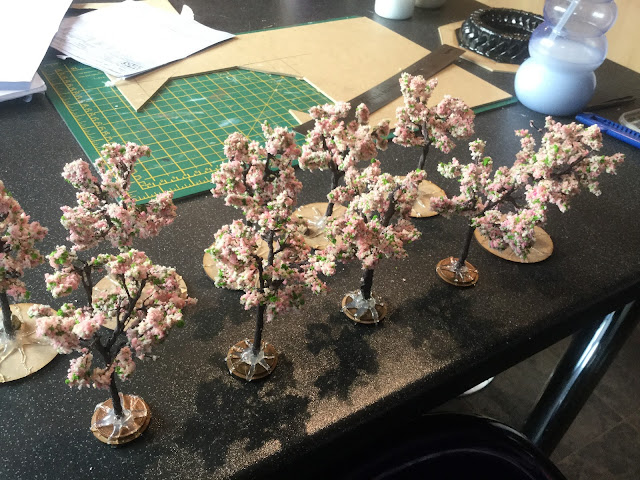 Next I covered the base and the bottom of the tree where the hot glue has been with a homemade "Stirland Mud" type textured paint, again masterminded by guru Fellows (video is here) I've coloured my paint to match my Temple board but you can colour yours however you like. 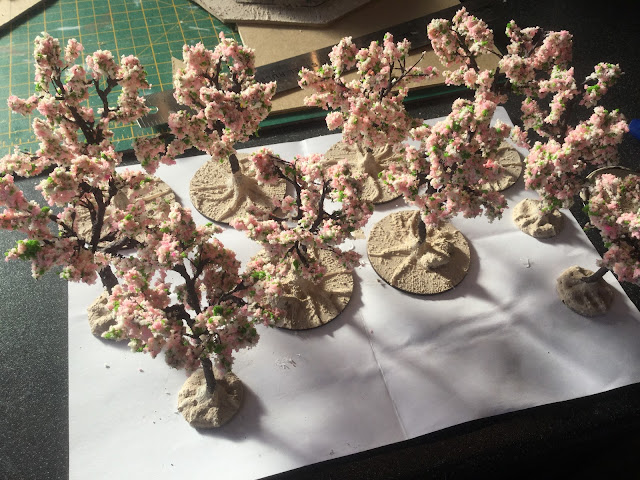 I then colour matched the trunk with a mix of browns and black and painted over the textured paint and drybrushed the earth and flocked the bases to match my usual style.  I didn't use too much grass as it doesn't grow well at the base of trees as the tree is generally taking all the nutrients... 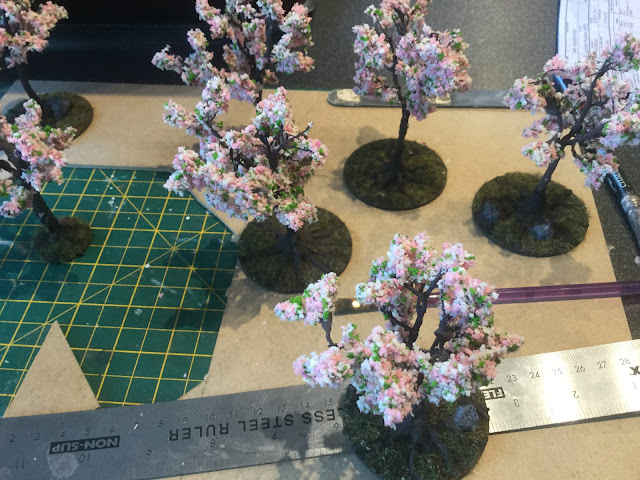 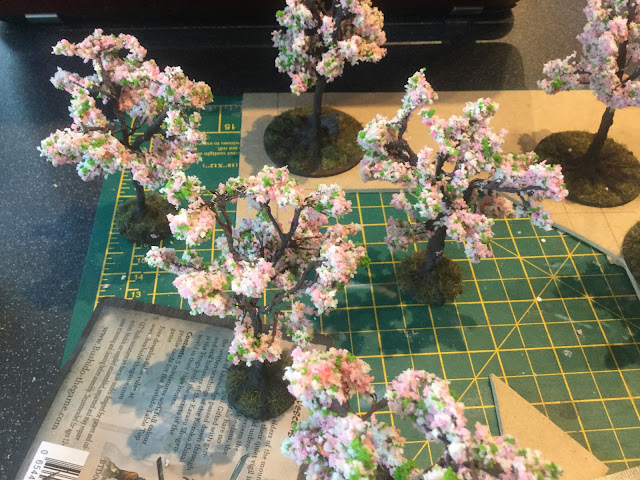 Obviously during all of this the trees were shedding foliage, which I dutifully collected so now it was time to seal the trees.  I could have done this at the beginning to prevent further loss but to be honest it was such a minimal loss it really wasn't a problem and I wanted to seal the base flocking too.  Before I did that though I wanted to use up some of the lost foliage, again I could have used some PVA and glued it back onto the branches but they were looking pretty healthy so instead I scattered some of it onto the bases to represent the falling of the blossoms that have inspired so much Haiku.

cherry blossoms fall--
come out and play
devil in me!

now it's time to seal all of the good stuff in, so outside I dutifully went in the subzero temps with my spray bottle of PVA/water mix and sprayed the trees/bases until they were sodden.  I then popped them on some greaseproof paper (waxed paper, baking sheets - whatever you call them) to dry. 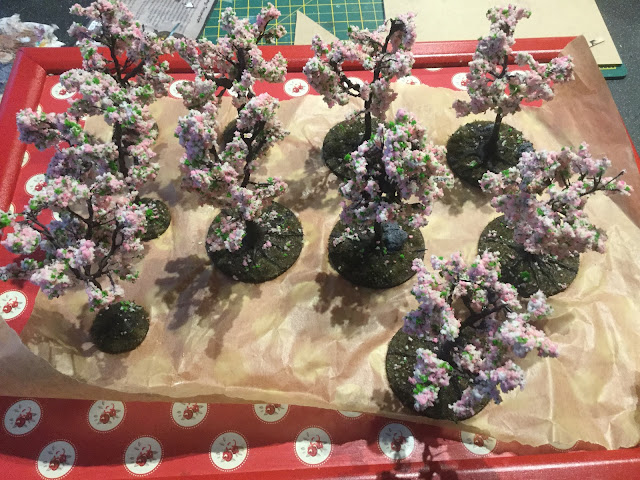 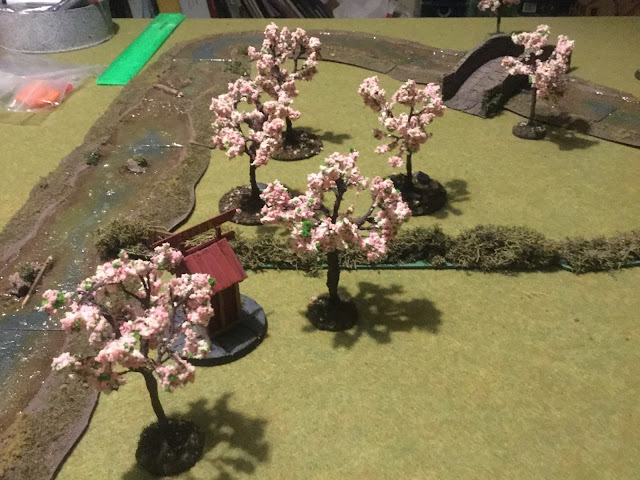 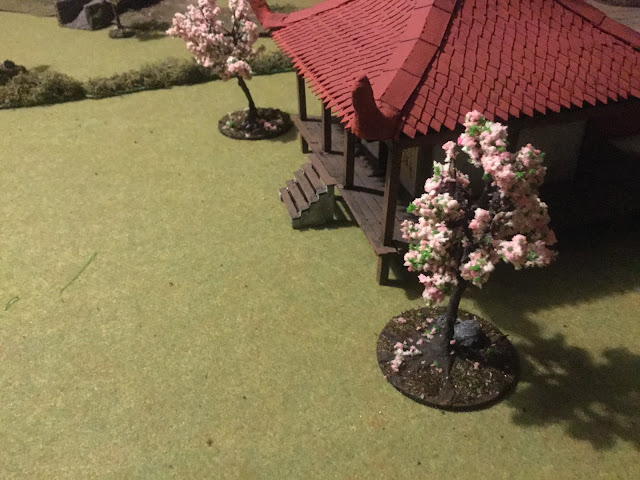 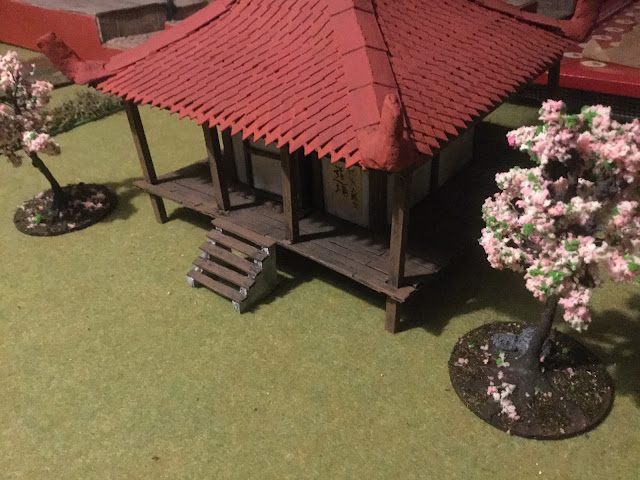 I still have a bit of the blossom foliage to play with for other terrain pieces.  So there you have it 10 cherry trees for any Asiatic terrain board for £4.23, the cost of some bases (which I already had) and the investment of a morning's work.  I'm think of buying a few more but 10 will do for most Bushido boards however if they've got some other colours that will pass for autumnal trees of even some decent green ones to pass for most deciduous trees then I think for such a paltry price I might just splash out...