please don't get too excited, rather than a full game that I have played, this AAR is based on a walk through game that I played solo recently in order to get used to the rules and get a feel for the game.  I will be using models from my Temple of Ro-Kan and Prefecture of Ryu factions.  There will be almost certainly no real tactical insight as there is no opponent and i'm doing the thinking for both sides with hopefully no bias. I hope that tactical thinking will come later in the day when I start to get used to playing the game and more confident in writing them up, the combat system is designed around secretly assigning dice to attack/defence so really requires 2 players to make it work as designed. Also this AAR will be a bit rules heavy compared to my normal write-ups, very similar in style to the eminent Bryan "Vampifan" Scotts approach to ATZ (hope you don't mind Bryan) and as I get more confident in the game that should start to become less and less.

In order to fully understand the flow of the game I think it's probably a good idea to introduce you to one of the most important concepts/mechanics of the game and that is the concept of "conditions". Each model will be in one of three conditions throughout the game, either "rested", "tired" or "exhausted".  This is really important to understand as it effects the type of actions you can take or whether the model can be used at all in a round.  Each model starts as "rested" at the beginning of each turn and then either becomes "tired" or "exhausted" depending on whether the make a simple or complex action.  If they are "tired" they can only make a simple action to become "exhausted".

Therefore models are able to make either one complex action per turn or two simple actions per turn each.  With this in mind, sit back and strap on your katana, we go to war.

"Know thy self, know thy enemy. A thousand battles, a thousand victories."
Sun Tzu

Scenario - This game will be based around the demo scenario I saw on the Bushido UK facebook page originally and then sourced on the Bushido Forum on the GCT website and you can find it here, it's also the demo game that I played at Salute 2016.  The idea behind it being that a faction influence a control zone 4" in diameter for a simple action and score 2 Victory Points (VP).  unlike most Bushido games the board is only 12" squared rather than 24" reflecting the smaller rice (points) cost of the factions and the walk-through nature of the game. 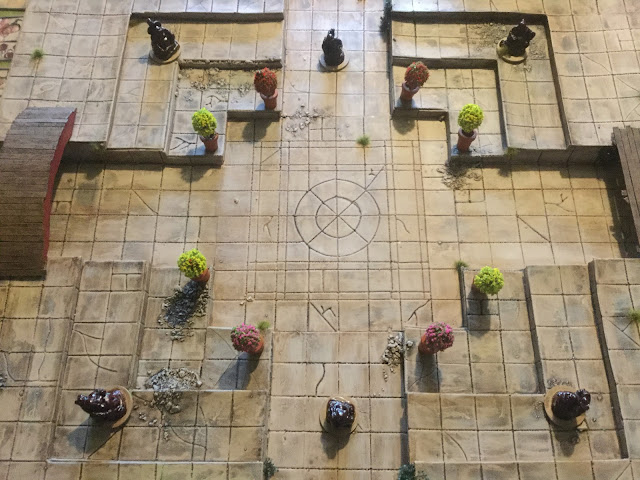 So this is the board, the Factions will enter on opposite sides around the foot bridges, the Buddha statues mark out the boundary of the board and the control zone is marked by the circle and the surrounding double tramline box surrounding it.  The factions are running at 23 rice each (halfway between the 20-25 rice recommended) and consist of... 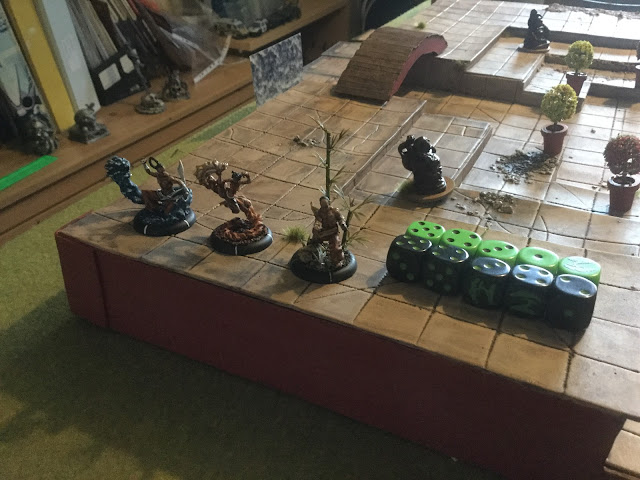 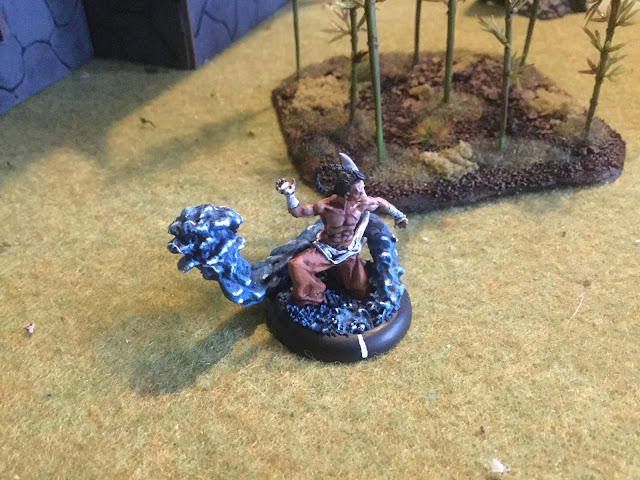 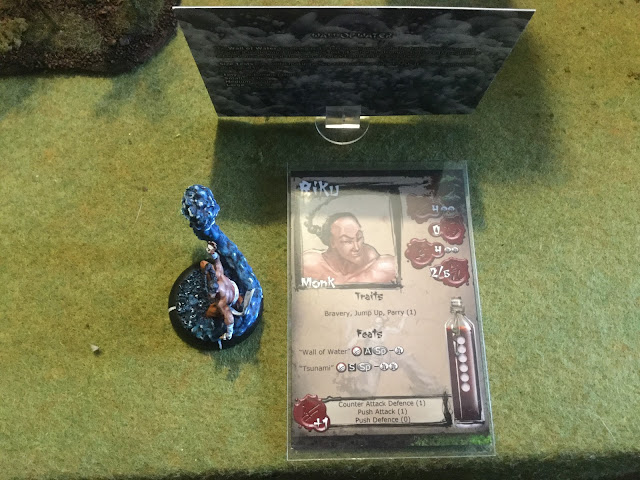 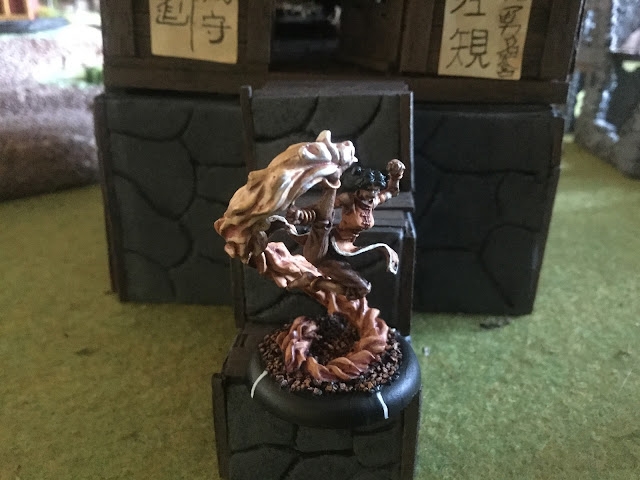 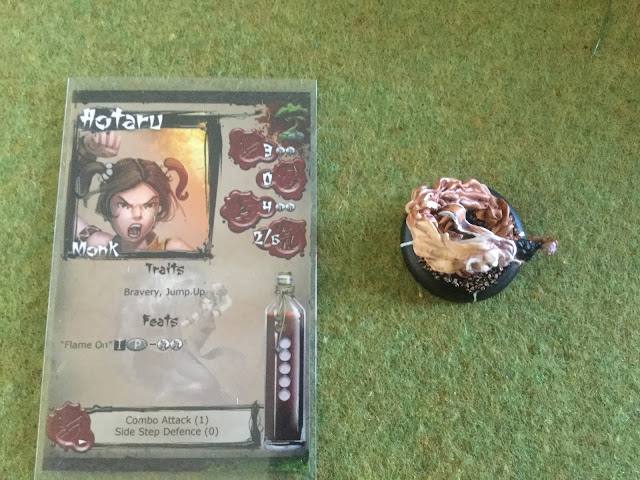 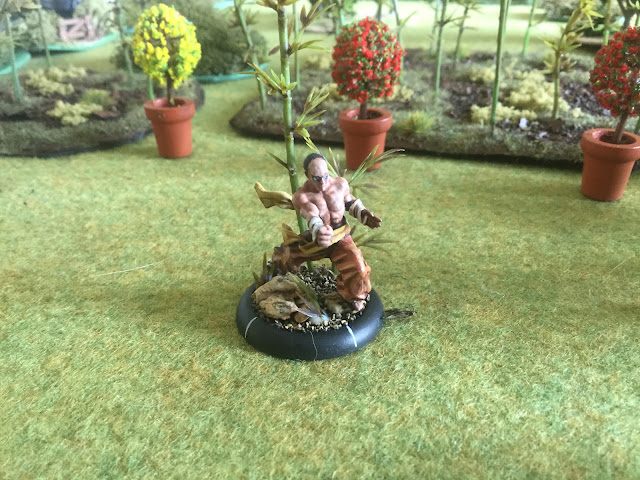 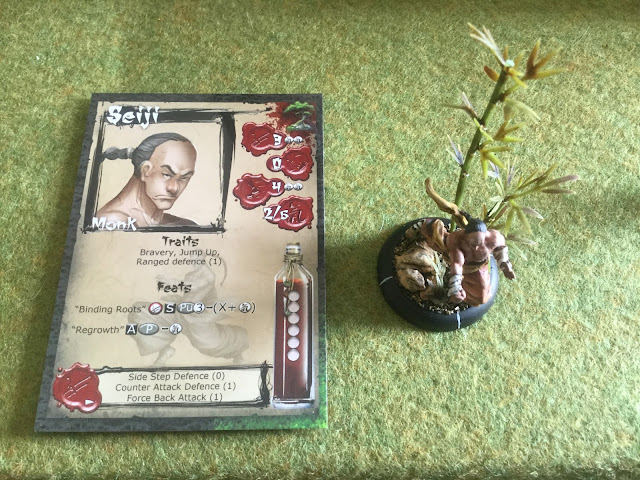 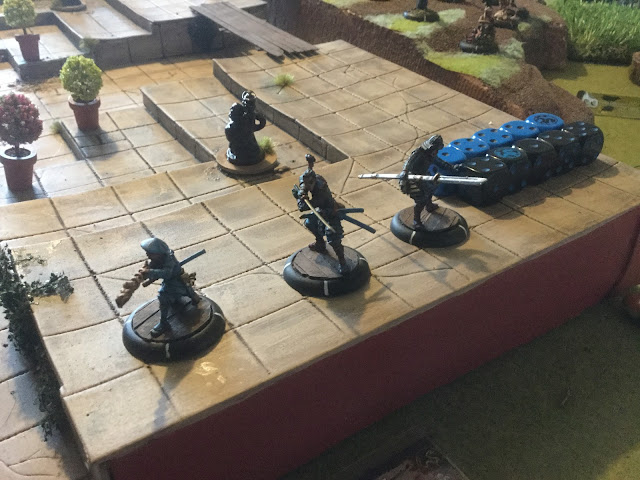 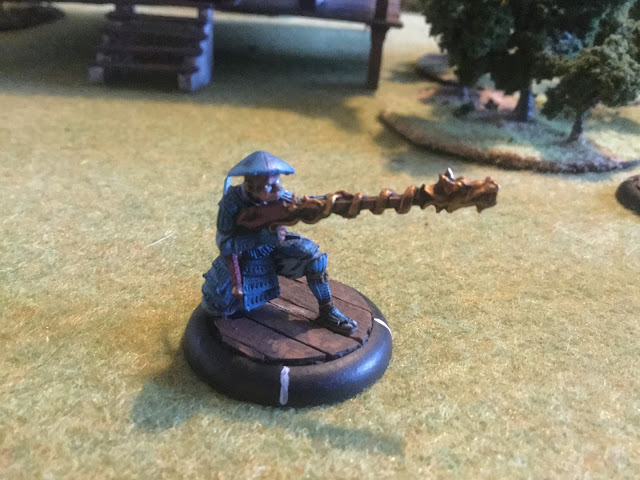 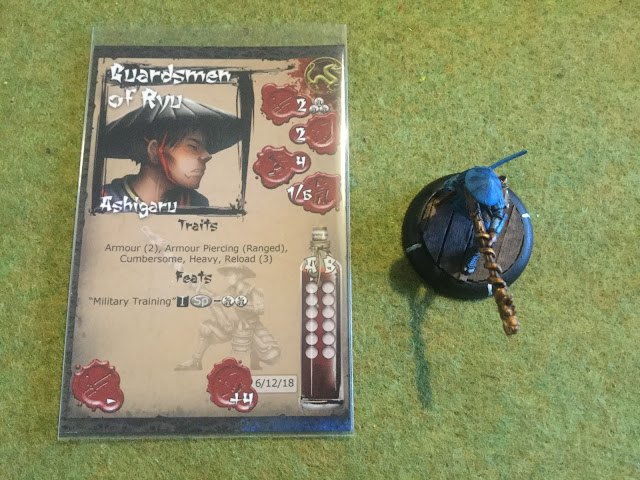 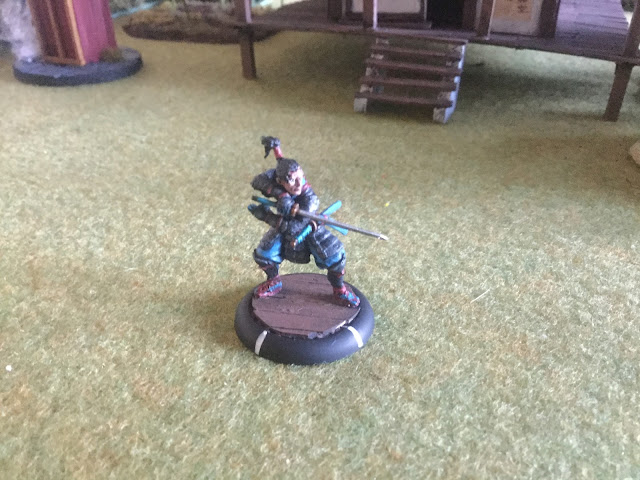 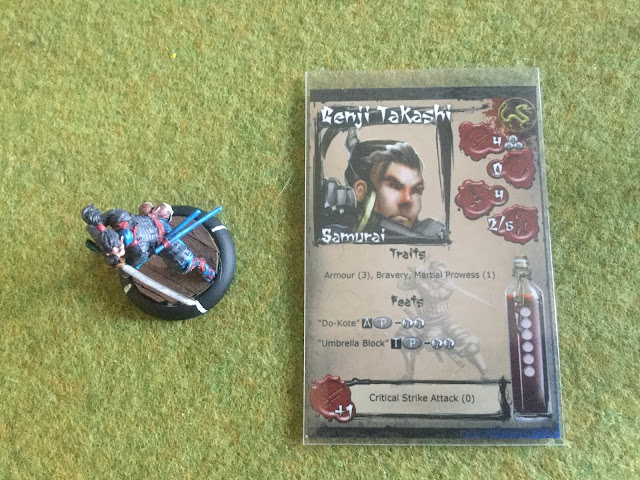 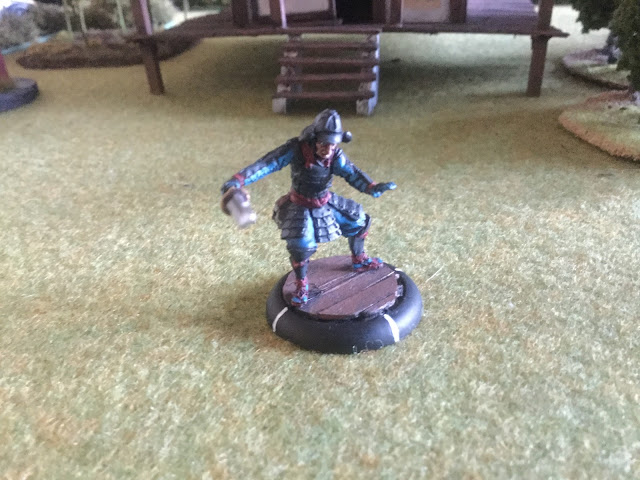 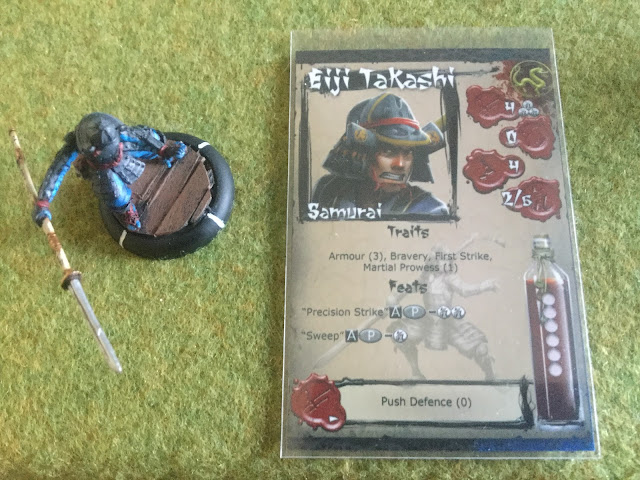 This is how they deployed.... 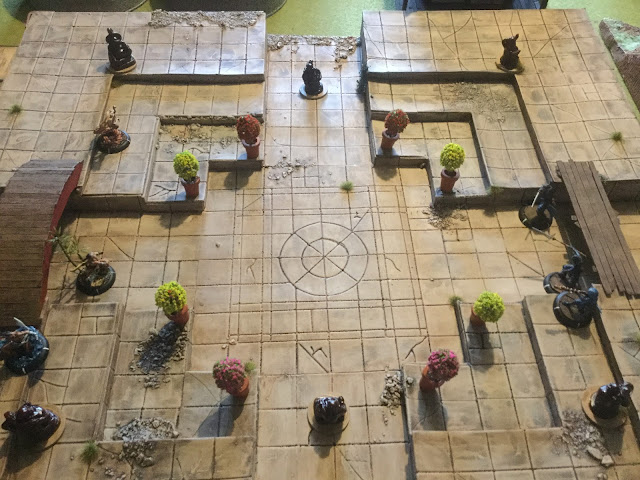 Temple deployed in the west with Hotaru most northern, Seiji more central and Riku more southerly. Opposing them from the east were Genji then Eiji with the guardsman at the most southern point.


Genji Takashi glanced across at his brother as they proceeded down the corridor.  His twin looked calm, and collected as always but his eyes, his eyes belied the nervousness that he was feeling as they probed deeper into the bowels of "Chikyū no tera" - the Temple of Earth, a sprawling structure that provided a huge tactical advantage in these troubled times. The corridor ceiling was hundreds of feet over head and footbridges spanned the steps of the indoor ziggurat. The corridor also acted like a sound tunnel and amplified the heavy steps of the guardsman father had insisted on accompanying them, Genji winced everytime the oaf clattered his cumbersome firearm against the exquisite but ancient tiles.

Up ahead the young samurai could see the "Nexus", a vital junction that would allow the Prefecture to extend it's influence in this part of the temple. Eiji's step matched his own as he increased his stride in order to get out of this confining corridor. Just as suddenly he stopped just shy of the entrance to the Nexus, his senses screaming at him that something was amiss.

"Come no further Son of the Dragon." came a sonorous voice from the gloom up ahead, "you will find naught but trouble, should you enter the Nexus without permission."

Genji, bristling at the command stepped into the room and scanned for the source of the authorative voice, he was therefore surprised when he saw it belonged to a young monk who had in turn stepped from a corridor opposite his own. The youth, accompanied by two other young monks looked no older than himself, indeed the others looked younger still! "Begone monk!" he snapped. "we claim this temple for Ryu" he added with a swagger, stepping fully into the chamber with his powerful brother and the firepower of the arquebusier behind him.

"Foolish samurai" the monk said in a doleful tone, shaking his head with a sadness that was surprisingly sincere. "you cannot claim this temple, it is here to serve the balance, as are we" he said indicating his fellow monks "and we cannot allow you to desecrate that balance" he said in a stronger tone, raising his hand and drawing on his Ki, the monk formed a spray of water from the air, with a twist of his hand the spray grew into a spout then a towering wall as he grimly advanced, beside him the female focused on her empty palms until they burst into flame that ran up her arms to cover her entire body.  The last of the trio stalked forward with a serene smile that was somehow more worrying than the fiery girl....

next time - the battle
hope you enjoy
dGG