One man and his dog (and a warrior woman)

And so to the last of my Bushido miniatures reviews...

I know I have concentrated a lot recently on these models, to the delight of some and consternation of others but I think this shows just how highly I regard these minis and the game itself as like most gamers I tend to flit between projects with actually very little completion before being pulled by the next shiny idea that grabs our fickle attentions.

In the case of Bushido I quite literally have not been able to stop, hence the high production of painting and terrain building I've managed to put out over recent months. It has grabbed my attention in an unbreakable arm lock to the point where only injury has slowed me down (I had some horrible RSI recently).  Tbh I still have other boards I want to put together, AAR's to write up (oh and the games to play!!), more terrain to build and more factions to collect, but for  the time being I have run out of Bushido models to paint and consider my factions (temporarily) completed even though there are "must have" models for those functional gaming lists (mine tend to be based on the models I like the look of...)

So onto today's post then, first up with have Atsushi and Shinobu - a hunter and dog team, here's the by now obligatory blurb...

The ronin of the Shiho remain a thorn in the Takashis' side. Without a fixed army the Takashi have found it almost impossible to hunt down and destroy the remaining rebels in the field, these cowed dogs hide in the woods and hills of the Dragon's lands. The solution has been somewhat answered in the excellent tracking and scouting skills of Atsushi, a former Satou family retainer now sworn to the Takashi. With his faithful hound Shinobu, rooting out those hiding in the dark, eager to savage any at the utterance of a single word from his master. 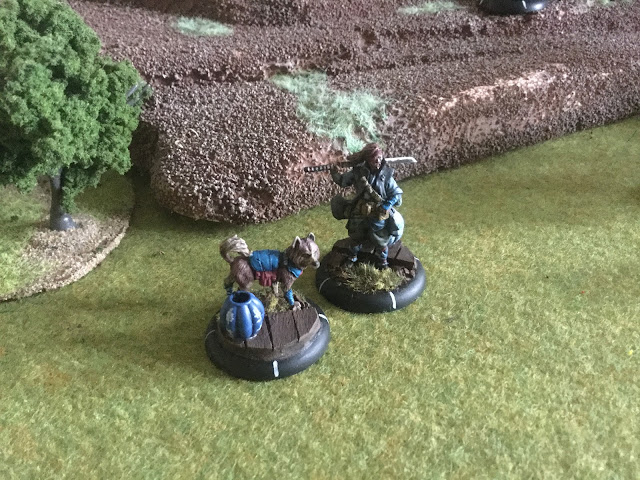 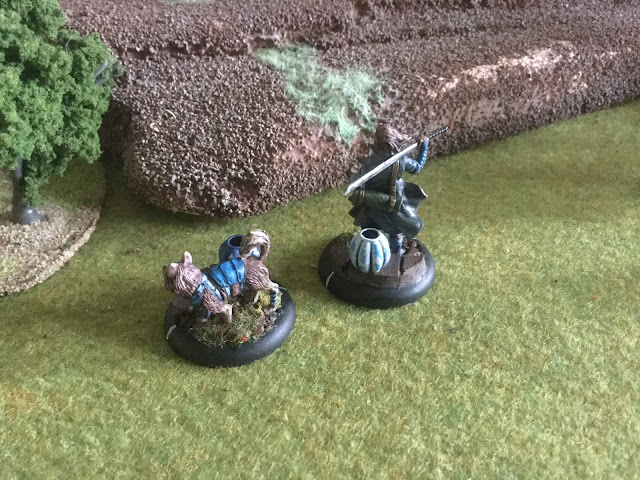 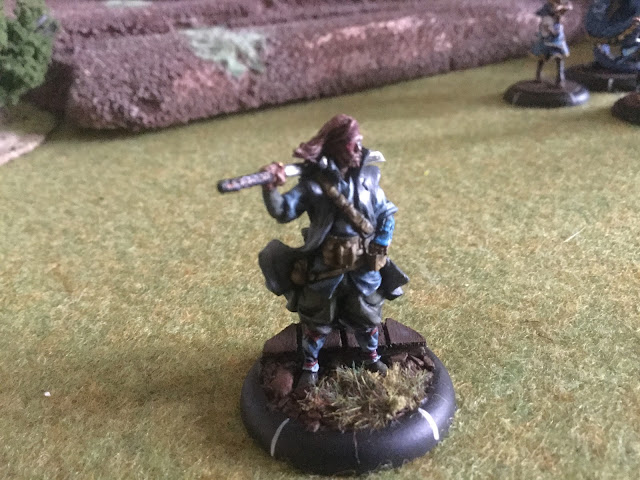 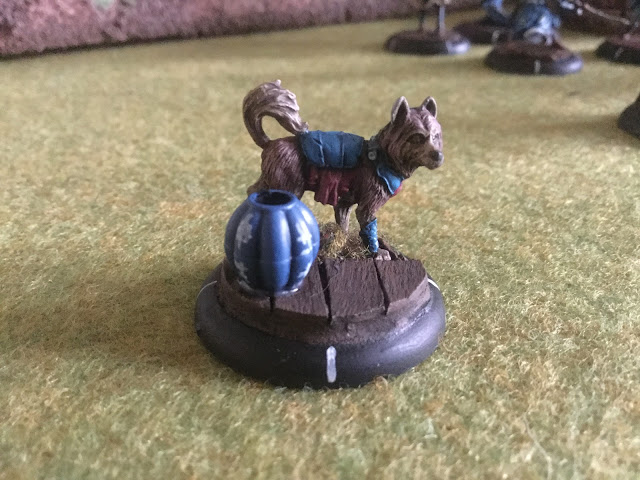 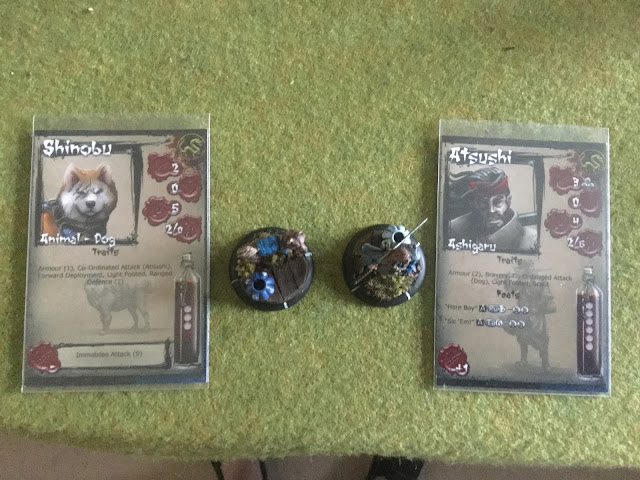 For painting purposes, I stuck to my limited palate that runs through my Prefecture faction ie "Lothern Blue" and "Fenrisian Steel" and used these on Atsushi's armour and breeches as well as  Shinobu's carapace.  Because Atsushi is working out in the wilds he's had some latitude in dropping the family colours, maybe in an attempt to operate more low-key? and subsequently has a grey duster that covers his allegiance.  The bases of my Prefecture faction were all meant to be the wooden flooring as per my blog post here but this didn't seem appropriate for these guys so I compromised and made it so it looked like they were outside these very important buildings.  Now because Japanese buildings are often raised off of the floor I couldn't just lay the planks flat on the base so used matchsticks to raise them slightly and sealed the edge with filler (spackle).  The other half I based with litter and flock as normal.  I'm v pleased with the effect it has created.  The vases are beads I found at "The Works" painted up and detailed with Kanji.

Gaming wise the pair will be used to cover a lot of ground and seize early objectives after which they can hunt down vulnerable support figures that lurk behind enemy lines.

Next up we have Tenchi, I think the blurb says it all really....

Tenchi, Seishin na Goei are an ancient order of highly skilled warrior women sworn to protect not only the bodies of the lords of Ryu, but also their souls. Offering their lives in service of their clan, fearless in the face of death and cold steel for those that oppose the Takashi. 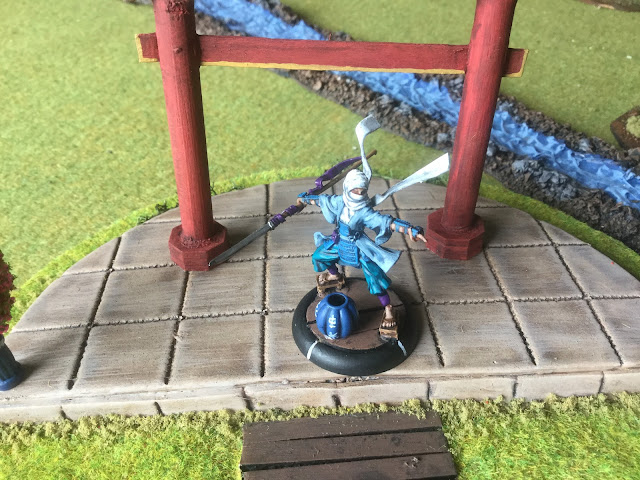 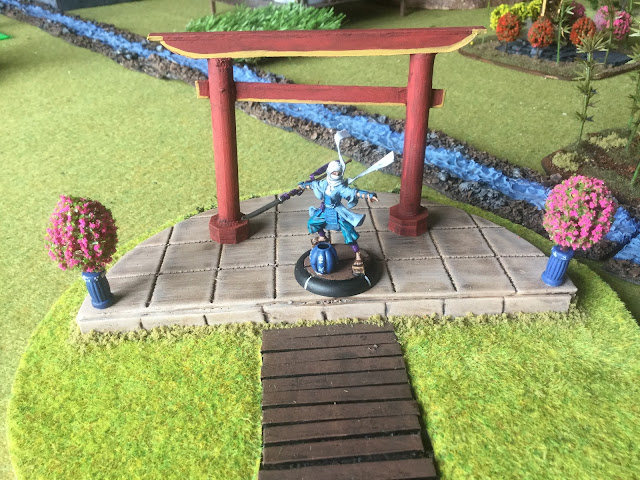 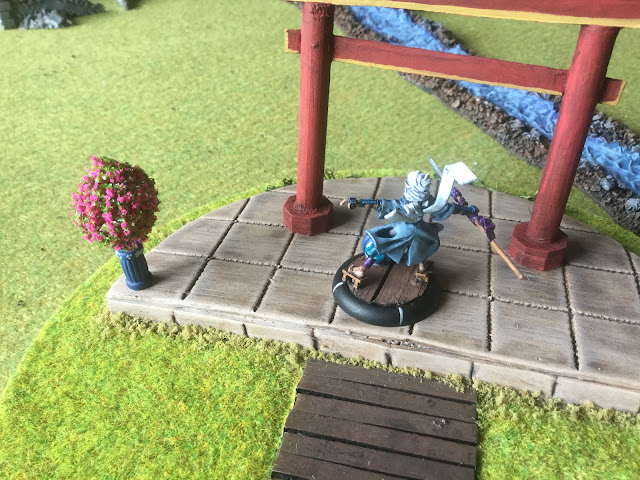 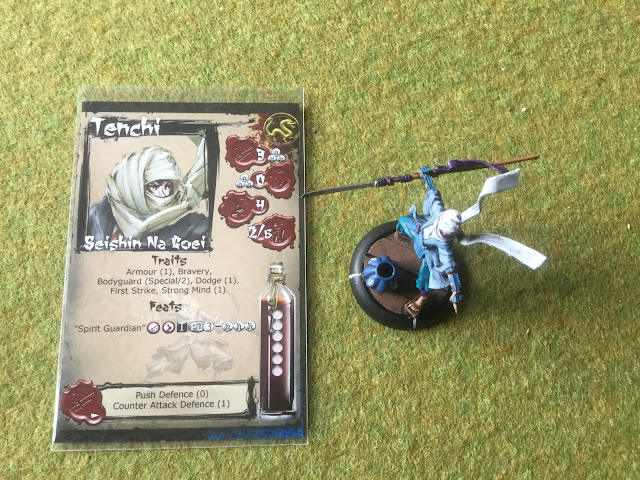 
I'm going to go with the term "Soul Guard"

Tenchi is painted pretty much the same as my other Prefecture.  She was a pain to put together as the yari was bent quite badly and the head scarfs that blow around her were quite tricky but not prohibitively so.  In the end though I think she has come out really well and i'm pleased with my paintjob, especially the white head scarf - white being a colour I really struggle with normally

In the game she will act as bodyguard for the weaker support models and taking the opposed Ki tests to prevent some of the worst effects of the enemy actions.

To finish the review then we'll have the obligatory end of faction photo.... 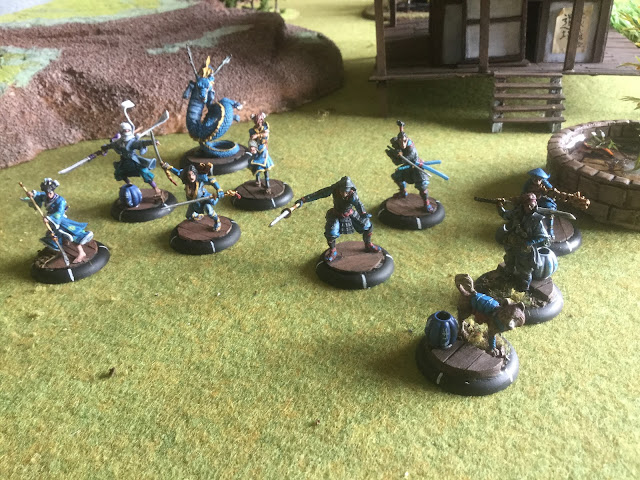 of course there are the other multi-faction models that can tag onto this faction, especially Bikou and the Golden Sentinel but you wouldn't want a picture of ALL of my Bushido collection to date........would you?