last time I set up the scenario and the board for my first Bushido AAR (warning this is a long post, get a cuppa in!)

Before each turn you have to roll a d6 for intiative adding any modifiers for traits and skills. You also need to generate Ki, each character having a generation statistic in order to fuel feats later on or boost melee, move or ranged statistics.


Riku, monk of Ro-Kan focused on the spout of water that had begun to funnel around his outstretched arm, the element responding intuitively with his requests - wrapped and warped itself around his body, drawing more moisture from the still air of the ancient temple until it formed a sheer wall of running water similar to the spectacular falls that dotted the mountains around Ro-Kan.  With a final flick of the hand he shut of all but a thin trickle of Ki to maintain the water wall obscuring him from the foul smelling arquebusier of Ryu across the junction. 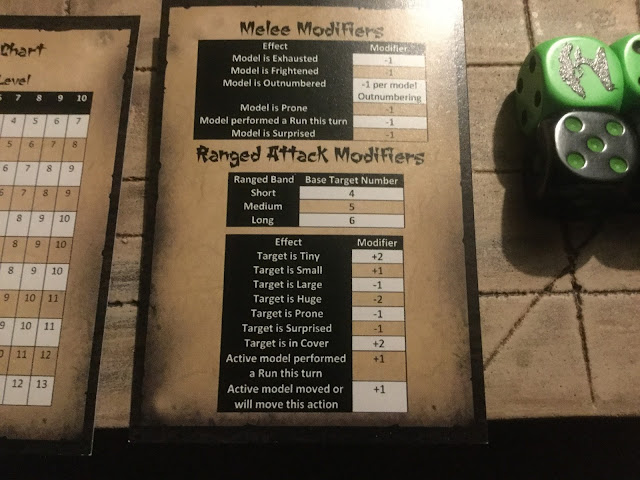 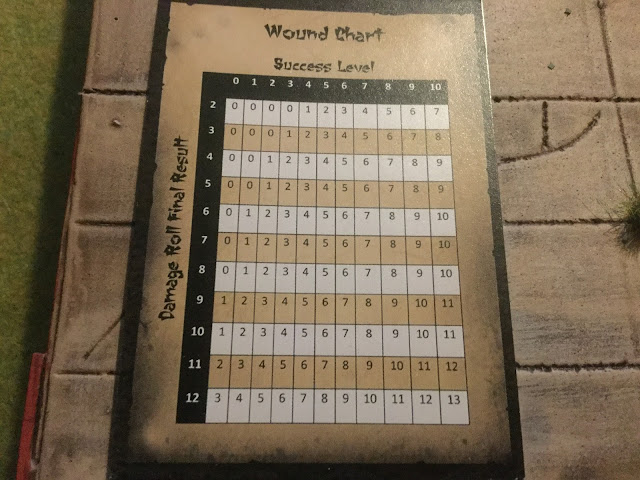 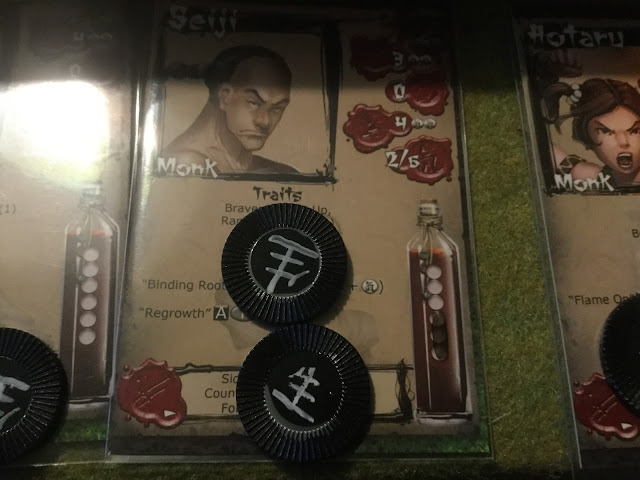 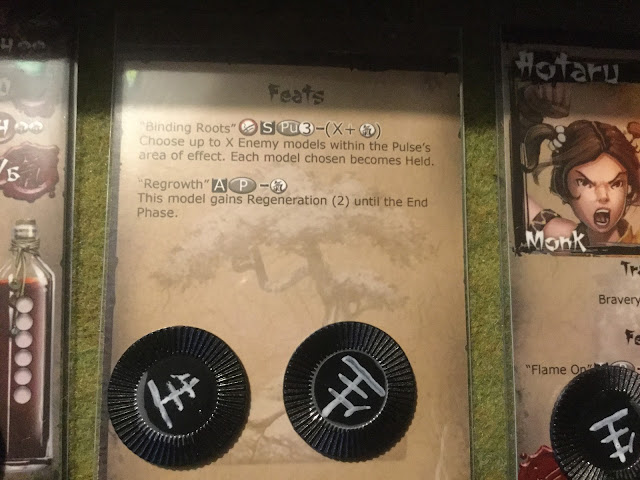 Riku's sudden attack had drawn the attention of the graceful Samurai that had pierced through Seiji's defences and sliced his stomach. Seiji gripped his shoulder where the Dragon soldier's bullet had passed through, the pain was intense but Seiji willed it into the background focussing on his Ki and reaching for his element - Earth.  Drawing strength from the solid rock beneath him and searching for the healing power of the root network that bound the world together, he slowly knit the wound closed easing some of the pain.  In front of him Riku and the Samurai whirled and span, a graceful ballet of controlled violence as monk and warrior deflected blows and counter blows.  The Samurai had so far failed to land a blow on the young monk but Riku's own attack had barely scratched at the tough plate that covered the Samurai's body.

Across the way, Seiji could see Hotaru was in trouble, fiery tears were pouring down her cheeks and she was clearly favouring her right leg following a cut from the other Samurai's katana.  As fierce as she was Hotaru was still only a child and Seiji felt a flash of guilt seeing her wounded.  Still the swordsman wasn't having it his own way as he was desperately trying to dowse a small fire that was bubbling the enamel on his "Haidate".  Seiji hoped that she could hold out until he could come to her aid. 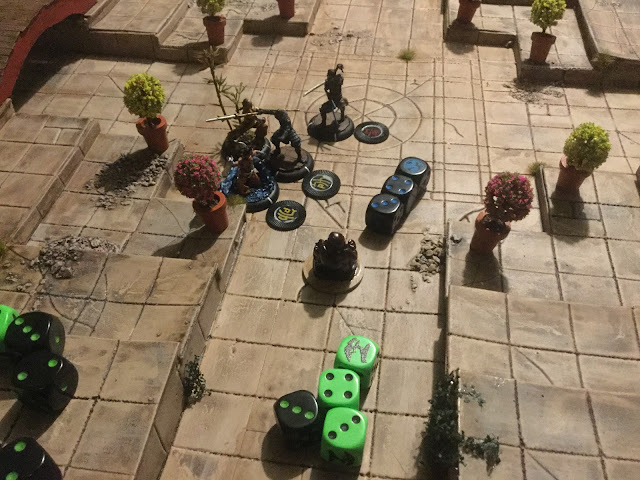 Genji, wiped the girl's blood off of his katana blade with a small scrap of her robe, he wasn't proud of putting her down but neither did it worry him, she was just an obstacle to securing the Takashi influence in this sector. Her fire magic had worried him and he looked mournfully at the sooted stain on his thigh plate.  the cries of his brother brought him back to his senses and he glanced over to see Eiji thrust and parry with great swoops of his Yari against the the male monks. Frowning he saw part of his brother's armour hanging loose where it had been dislodge by the monk's kicks and strikes and the wince as his twin took another blow to the chest.

Genji, dropped the rag and hurried over the hotly contested courtyard, seeking to come to Eiji's aid when a particularly solid roundhouse from one of the monks connected with his neck and he dropped to the ground with a clatter of metal armour striking the tiled floor.  The monk stalked around the stunned Samurai, as Genji stood over his brother's body tears rolling down his face, when he saw a slight movement of Eiji's chest indicating that his twin yet lived! More calmly he drew his wazaki and hefted his katana and prepared to defend his family's honour. 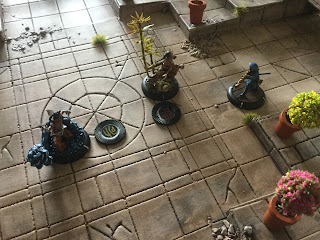 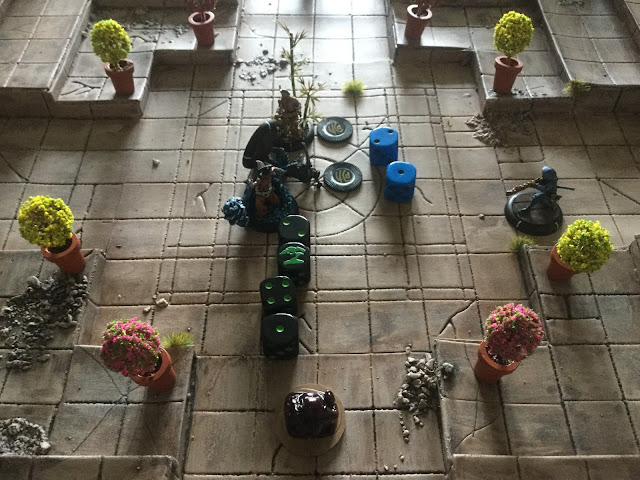 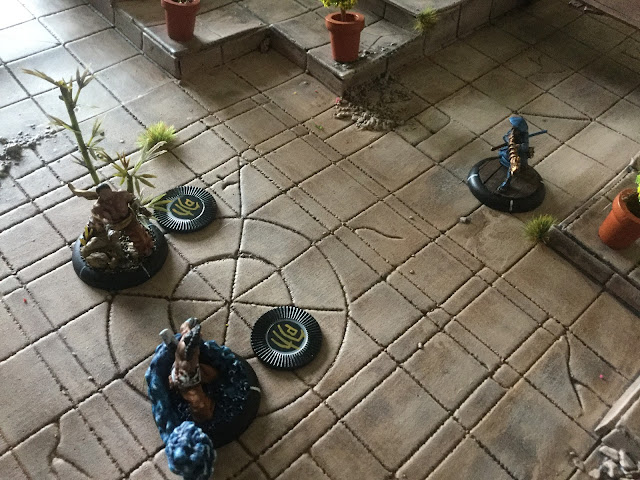 Hin desperately rammed the lead ball down the barrel of his firearm, his powerful lords were lying on the tiled floor and the Ro-Kan monks were stalking toward him with stern looks on their young faces. Behind them the fire surrounding the girl flickered and extinguished increasing the gloom in the cavernous courtyard. Hin was in big trouble, there was no way the cumbersome arquebus would be loaded in time, dropping the weapon he turned to flee.  Instantly roots and creeper vines burst out from between the tiles and twined around his legs and torso, binding him to the spot and tightening to restrict his breathing.

"Dragon man,  you live this day and will continue to do so.....if you deliver a message to your lords." the voice of the 'water' monk reverberated through the fear fog in Hin's mind.  "You may take these pups back to their family and tell the Takashi's that the balance will be maintained, with or without their help"

The vines held Hin tight as he watched the two monks stoop over the fallen girl and lift her without visible effort, heading back down the corridor and into the darkness beyond.

I hope you enjoyed my first AAR for Bushido, it was a little hard going at times as i tried to explain various rules, I completely forgot to use certain traits such as "martial prowess" for the twins which would have re-rolled certain combat dice rolls but it gave me a flavour (and hopefully you guys too) of the game and just how good it can be when played with two players.  I really can't wait to start playing it for real.

"Strategy without tactics is the slowest route to victory. Tactics without strategy is the noise before defeat."
Sun Tze

"But when you think you're safe, is when you are most vulnerable"
Seven Samurai