I've decided my new faction for Bushido.  Considering the starter set is due to be released in August and the minis look amazing - It has to be Jung Pirates.  Now the rest of the faction no doubt will take a while to drip, drip out but I don't mind as I haven't got any gaming tokens for a few months until wedding anniversary and Christmas have aided the cause. So this isn't a post about the pirates themselves but about what they fight across....but here's a quick pic from the GCT website of the faction anyway.....hehehe.

Now it wasn't just the awesomeness of the models that attracted me to the faction as lets face it GCT minis are ALL brilliant in their own way, but rather I was swayed by an unlikely source - the grumpy old boy himself - Joe of Zabadak's Zombie World fame.  His posts about his pirate project including his lovely ships which you can read here have really inspired me to build a special board for Bushido which might have passed for Silvermoon Trade Syndicate (a collection of street criminals and underworld merchants) which I really am interested in getting at some point, but instead what I had in mind just suits the Jung to a tee. Actually i would really like to see both factions battle across the board (in fact it has several times in my head....)

Anyway to the board, i wanted to build a themed board based around a harbour scene that not only looked the part but was fully functional i.e i could play most of the scenarios listed across it, a bit of a tall order considering how many there are. However recently I saw a board made by a chap called Richard Fairbrass, posting on a Bushido face book page I follow and it blew me away with how good it looked. 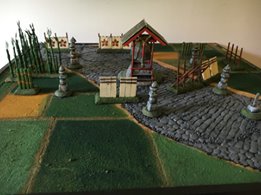 You can see the idol objectives around the middle of the board and the various circular control zones and even the corner deployment zones that Richard has made into terrain features on the board, brilliant and totally inspiring.

Seeing the possibilities in it, I reached for artists canvas....no  i'm not an artist lol but i do use them as they are 2'x2' squares and perfect for Bushido boards. The harbour would need to contain ships or boats (hence the Zabadak's inspiration part of this project) and these would also need to be playable across. This is what I've come up with. 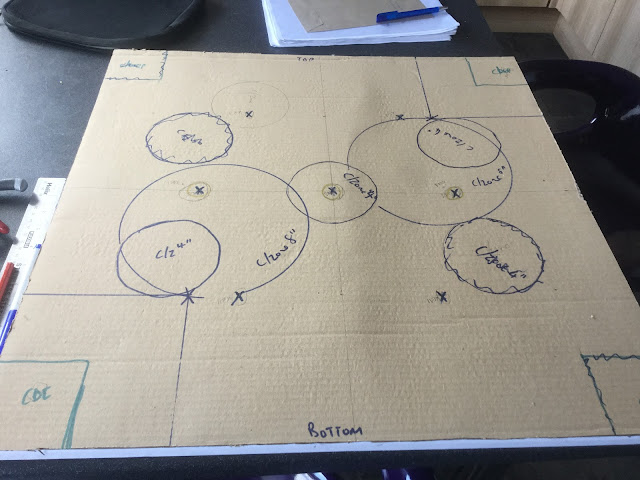 So firstly i covered the canvas with a large piece of corrugated cardboard that i "borrowed" from Tesco, I think it was a tray for baked beans cut to 2' square and glued to the canvas for strength.  I then layed out all of the objective points onto the card, initially I got a bit confused with where they went but after finally labelling the top and the bottom of the board (seriously!?!) I managed to work it out....

then I had to decide how the board features I wanted would interact with these points.  So the board would be at the mouth of a river and would feature wooden piers for the boats to tie up alongside.  Initially I also wanted some kind of inn or seedy buildings in and around the harbour but what I settled for was twin markets that covered both sides of the river and joined by a wide bridge, the first market would be the usual food and goods type thing and the other would be a flesh market for the pirates to sell slaves for the pits and brothels.  to this end I added some of my polystyrene ceiling tiles that I had from my Temple board and cut them up like so and gluing them to the board. This would provide the relief on the board and represent the river/estuary. I added a 4" circle to the land portions to represent a raised platform for the overseers and moneylenders to look over their respective markets, which would be represented by the 8" circles (these are objectives in the game) I also added a little wooden fencing to break up line of sight.

I also added cardboard edging to the board to make it look neater and to aid the resin pour for the water later on.  The whole board was then covered with filler that I got from a pound shop. 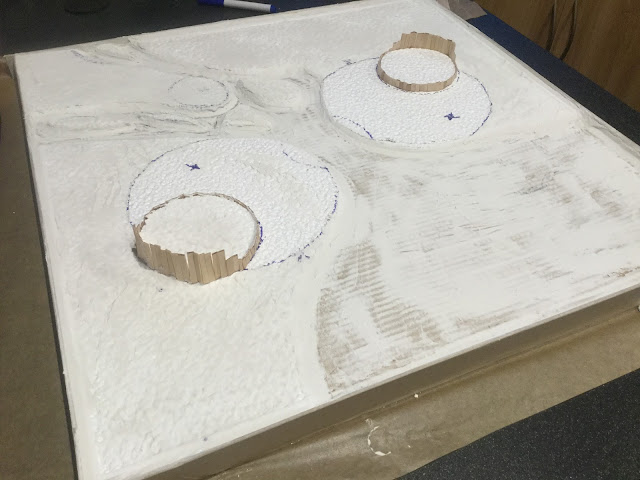 I then added some sand to the river bottom and the control zones and cat litter to the other areas to provide some general texture.  The board then received three coats of watered down PVA to seal the whole board and to provide some protection 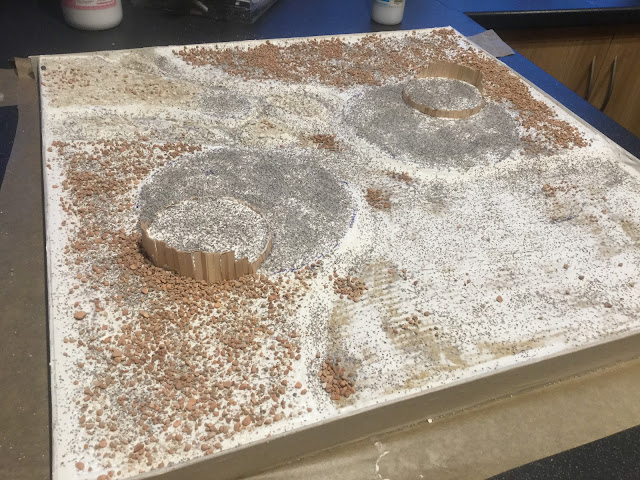 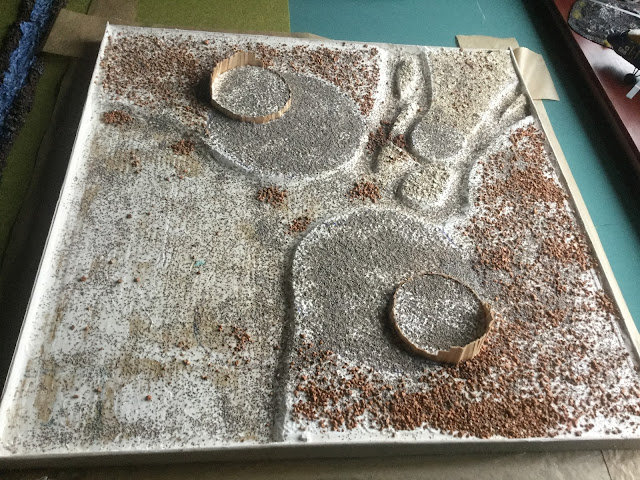 The next step will be to use a red primer spray to cover the piece and then a brown spray and other colours for the various parts after that I can get started on the detail.  To that end I've already started building the boats which i will show you in another post.

Email ThisBlogThis!Share to TwitterShare to FacebookShare to Pinterest
Labels: board, Bushido, terrain