In a previous post I showed you a teaser pic or two regarding a Temple board for my Bushido factions to fight over.  You can see the post here

So let me show you how I got on. The board itself was inspired by the demo board I played on at Salute.

Firstly I gathered the bits and pieces required, now this board is going to be relatively simple and unlike many of my other projects the details will be mostly removable so that I can vary the scenarios played out on it.

1. 2'x2' board, I went with an artists canvas. Sounds strange as the canvas gives but it has a wooden frame and a centre batten for strength and I'm going to cover it with....
2. Polystyrene ceiling tiles as close to 2' as you can get them mine were 50cmx50cm - I used 5
3. PVA glue
4. large sheets of foam (my fave!)
5. brown emulsion tester pot (Dulex cookie dough)
6. kitty litter


next up I mapped out how i wanted my board to look, I wanted a central area with a space to add my koi pond or other objective, with tiered areas like an ampithetre but levels rather than steps. I also wanted tunnel like entry points into the temple and this is what I came up with.


So first of all I glued tiles onto the canvas, completely covering the surface to give the board some stiffness, but keeping the board light for easier storage. Cutting the remainder of the tiles used into "L" shaped tiers, I stacked them to create the tiers, weighting it down with my entire collection of mugs....I then left it to dry overnight.

Next I drew and then scored a tile pattern onto the sheets of foam including a decorative pattern for the mid point of the temple and covered the entire surface area with the foam.  I did this for two reasons, firstly it will provide a level of protection for the polystyrene against knocks and accidental damage as well as stiffening up the canvas.  Secondly I could add lots of detail without cutting hundreds of individual tiles like I did with my hospital project (which you can see here)  I also added foam to the edges of the board just to tidy the ragged sides up.  I then added some kitty litter to cover some gaps and as rubble/detritus.  It can get a little fiddly but it is worth being accurate as you will get some tiles looking bent if the foam is not flat (I experienced this so you don't have too...)


next job was to cover the entire model in brown emulsion, in the end I put down 5 coats of watered down emulsion in order to keep the detail of the tiling.  I then used the "Red Spice" emulsion I bought for my dojo roof to paint the sides of the board. I used emulsion as it's cheaper with a better coverage, £1.49 per pot for quite a bit of paint compared to a tiny pot of acrylic paint for £2 plus. The most expensive bit was the brown ink wash that covered the tiles, GW's "Agrax Earthshade" was watered down and added liberally, even with the watering down it used nearly the whole big pot. 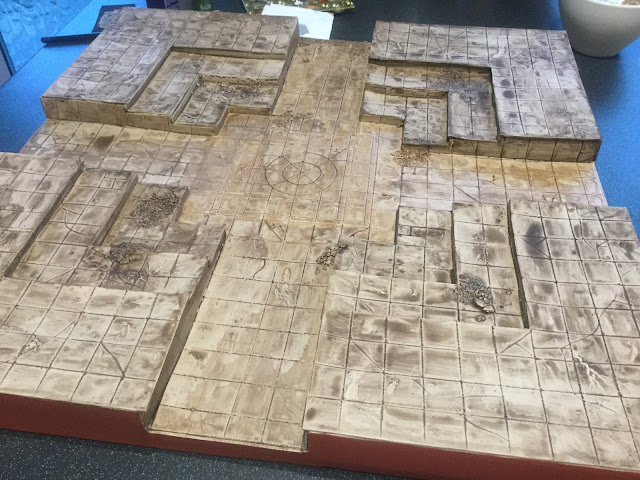 although this shaded the board nicely, it looked really messy so i needed to tidy it up with a bit of highlighting. The board is too big to highlight individually so it would need to be dry brushed.  i just used a single highlight with the Cookie Dough emulsion and we have.... 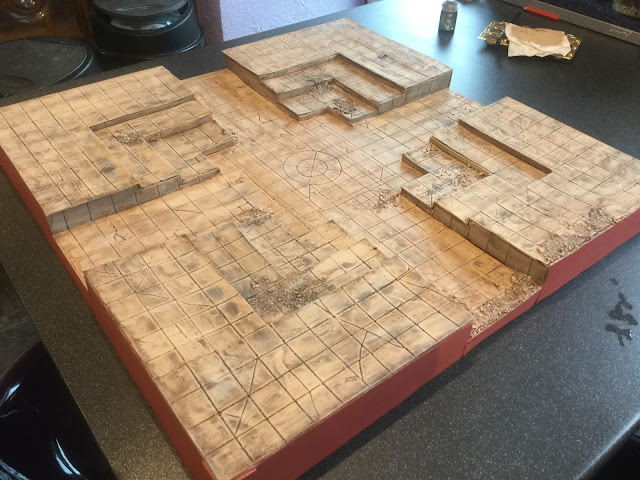 much better! so all there is to do is to use a clear paint sealing spray to keep the whole thing safe and then add on some moss and ivy to add some character and finally we have... 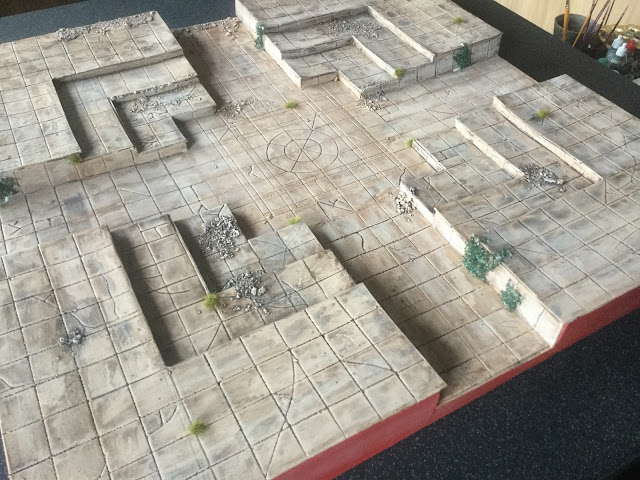 So here is my board. Hopefully it will have quite a lot of usage, I've completed a couple of bridges to cross the tunnels that can be removed and moved around the board.  With the objectives and Koi Pond that I've completed recently this should be a versatile board and some scatter terrain such as plants and rails/fencing/walls to finish it off. 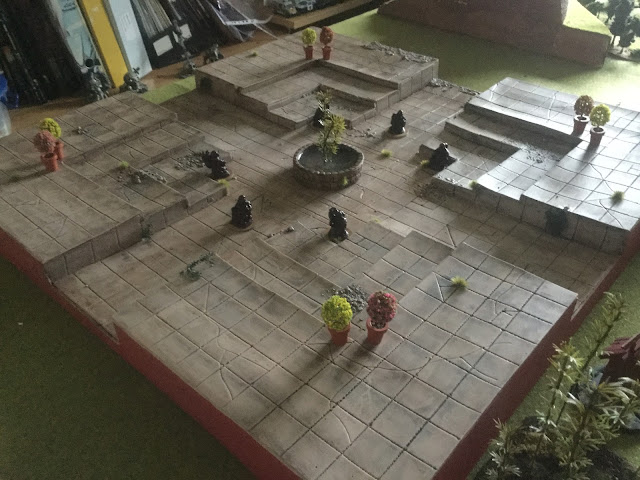 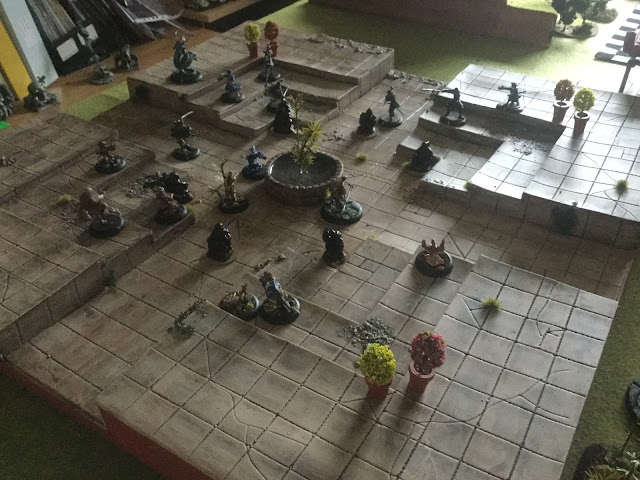 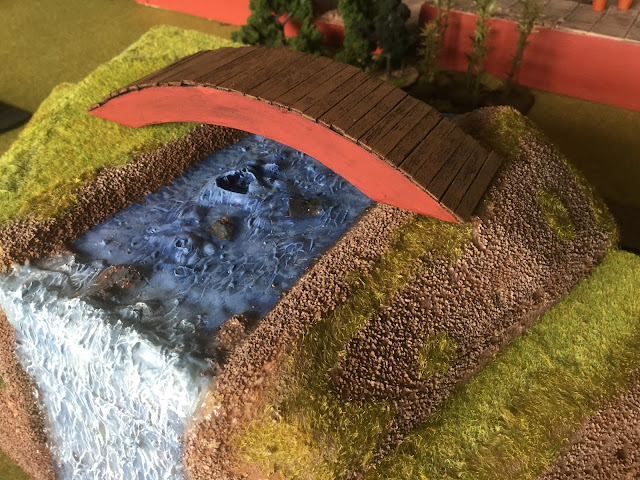 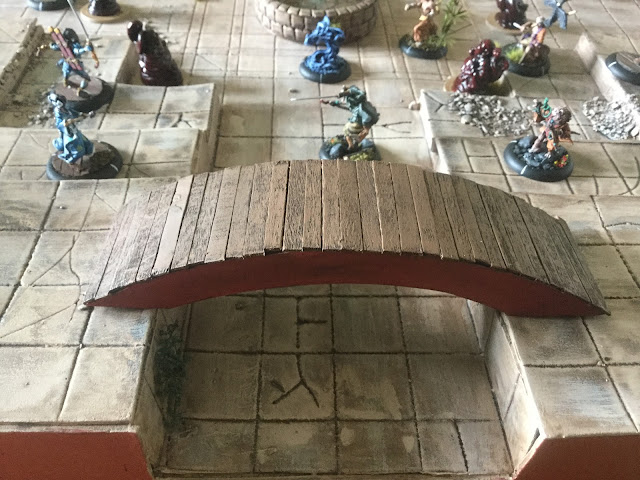 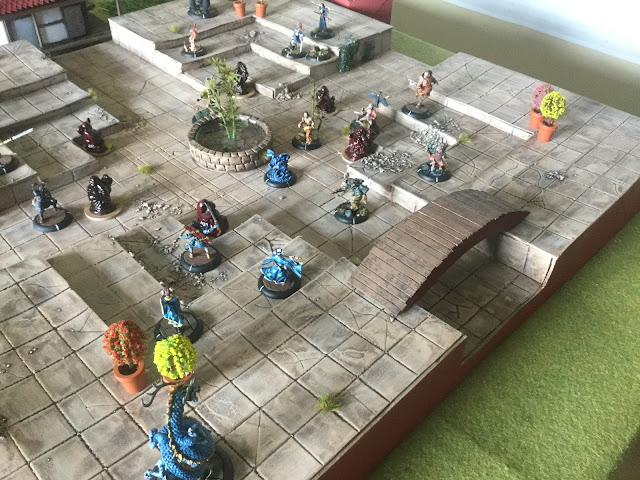 Hopefully I will finish off a few more models to complete the two factions I currently have (with an eye on a couple more in the future...) and one of the next Bushido posts should be an AAR.