following my "Tale of 3 Gamers" post last week a 4th has come out of the woodwork and very welcome he is too. Damon from "surviving the zombie apocalypse" like myself has come back to gaming after a long sabbatical, that said i gamed with this guy back in the 80's. We started out pretty much at the same time aged 14......

I'll let him introduce his warband.

Looks like I will become the fourth gamer in this series and to be fair and honest I am a bit of a follower, let me explain; We all went to salute to try out new games and I didn't play Saga as when watching for a short while it just seemed the same as most others and I went in search of different games but that's another story. So I felt I had to collect a saga force so that I wouldn't miss out on play dates so to speak (actually its what the wife calls them). So I read the rule book and wham I loved the concept as it fixed all that I thought was wrong with GW's fantasy battle rules. I know its not fantasy but its hand weapons and bows etc so hopely you'll follow what I'm saying. I had an uncanny knack of finding loop holes in the army lists to field a strong army as the Saga rule book states and I won more battles than I lost. Again a story for another day. My influences regarding the dark ages are out of context for the Saga timeline, as in my love for hand to hand battle and bows and crossbows comes from 3 sources. King Arthur about 500 years prior maybe more, maybe less depending which expert you want to listen to the most on that subject. So a warband representing the knights will have to be formed at some point in the future. 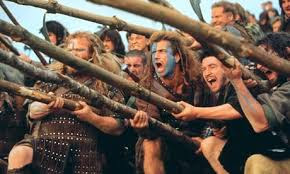 The other two are after the dark ages timeline, first we have Robin Hood not sure how I will be able to field a warband based on that character for sage. So that leaves my third Braveheart which also leeds to my first choice of warband the scots. Miniatures have been purchased and should be with me very soon. Here's my fluff then; Lachlan Carlton looked along the huge battle line, there he was William Wallace talking quietly to his close comrades in the distance. Lachlan looked around at the Toisech close to him as he surveyed the settelement below him, "My Toisech" he thought. Lachlan's thoughts wandered as he recalled how all this started, he'd come along way since tending his fields. His Viking acncestry gave him a big strong body kept firm by working the fields with his family. His mother was raped when the raiders came but she couldn't bring herself to abort the baby once she knew she was pregnant. The village took to calling him Lachlan so he owned it and soon became the largest and feared male in the village. His village was ransacked and burnt to the ground by a norman raid killing all but a handful of the men, Lachlan was one of the survivors and in a fit of rage after finding his dead wife and children, stole into the norman camp at night whilst they were raping the surviving women in their drunken victory celebrations. He was the only man to walk back out of that camp. After word of his heroic deed other men that had lost everything flocked to him and he started raiding the south attacking the Normans or anyone who stood in his way gathering wealth as he looted. He returned home a local hero with enough coin to buy enough land to build a farm and a small settelment. His Toisech settled with him and so did some of the Soer-chele that raided with him. Lachlan was never happy trying to start again and his Toisech got restless so with the rumours of invaders and rumours of a war brewing down south he left his settelment in capable hands and set off to fight once again, his loyal Toisech followed him and as word spread that he was leaving others joined him. Soer-chele from across the lands joined up along with some disgruntled Doer-chele on his journey south into Norman lands and beyond.

so there we have it, our fourth gamer and we can truly crack on with the series. I'm excited to see what the other lads have come up with and I hope you guys are too.