In Bushido like all other Wargames, miniatures fall into certain factions. As gamers we choose a faction based on the look of the models, the style of play and/or the history and mysticism that surrounds it.  For Bushido I love the idea of high kicking, mystic monks fighting for balance and harmony AND samurai and high Japanese society, hence my choice of factions - Temple of Ro-Kan and Prefecture of Ryu. I also love ninjas so I guess at some point I'll be looking at Kage Kaze at some point in the future (probably the end of this year), oh and pirates so Jung as well.....ooh demons and zombies - Savage Wave and Yurei.....erm

But there are some models that cross the faction lines and can actually fight for several different factions (the rascals!) although by doing so their rules change ever so slightly.  I like this as it allows the gamer to dip their toe into another faction and see how it plays, it offers a player different options and tactics not normally associated with their chosen faction and it presents different painting challenges for those who like that part of the hobby (there's only so many orange robes a guy can paint ya know!)

For me I went out and splashed the cash at Salute on these guys...

First up we have "The Grey Pilgrim" there is no blurb for her from the GCT studios so my thoughts are that she is a messenger of Raijin - the God of Thunder, with her lightning bolt ranged attack and "electrify" Ki feat. She is classed as a "Seshin no goei" who were a group of highly skilled warrior women and her stat line and traits reflect that.  Pilgrim can fight for either my Temple faction or my Prefecture faction so was a total must have. 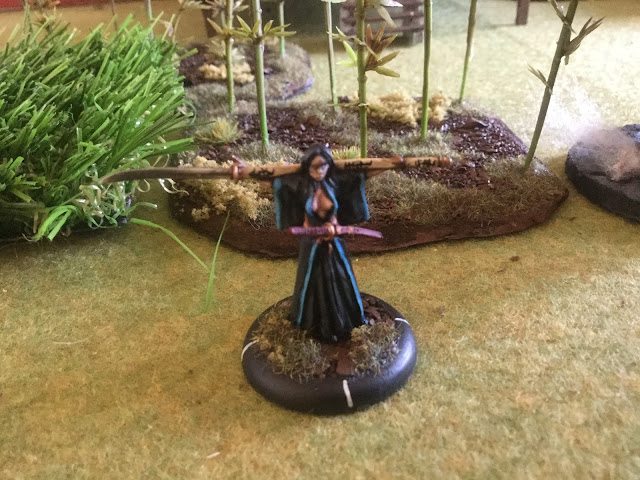 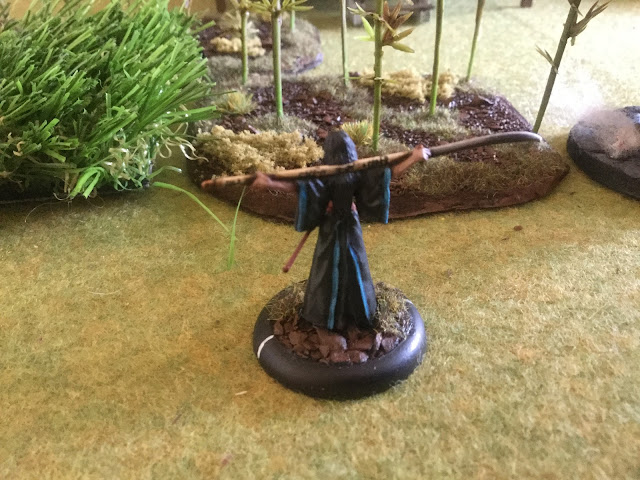 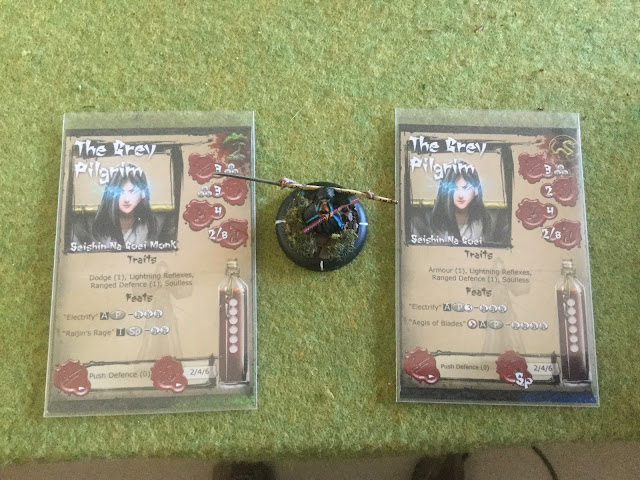 Next we have "Bikou", She was a special character bought at Salute and produced for the show. She is my first ninja and looks bloody awesome!! Armed with her Kasari she trips and slows her opponents while striking from the shadows. There are two versions of her and as I said I have the 2016 version which is great, I might at some point find the other version too as I like it so much.  This is her blurb from the Prefecture faction entry.

Bikou is a highly trained ninja. Skilled in the arts of stealth and distraction she strives to strike where her enemies least expect her.

but over Salute, GCT revealed Bikou to be a double agent see the revised blurb.

Her true affiliation is now revealed, an agent of the Kage Kaze Zoku right in the heart of the Prefecture, her true mission unclear, but it only goes to show the ninja can infiltrate anywhere. A ghost and skilled assassin, almost impossible to pin down in melee she is as elusive as the morning fog, as deadly as the Takifugi, her enemies can never know when or where she will strike. The danger only increased further as part of a Shadow Wind death squad.

so there we have it Bikou can be played as part of the Prefecture and as Kage Kaze operative which will probably be my next faction. 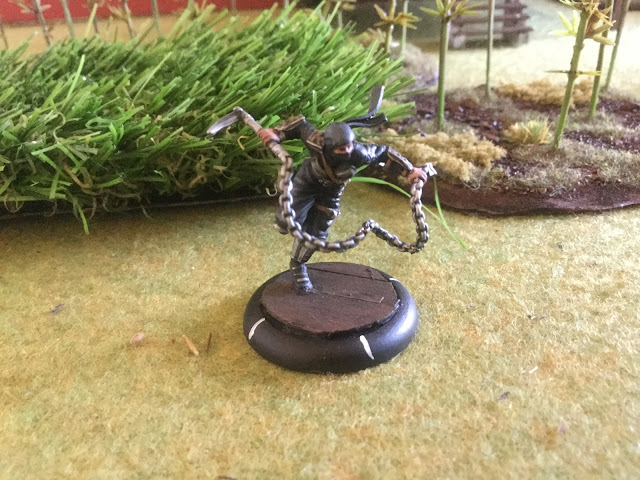 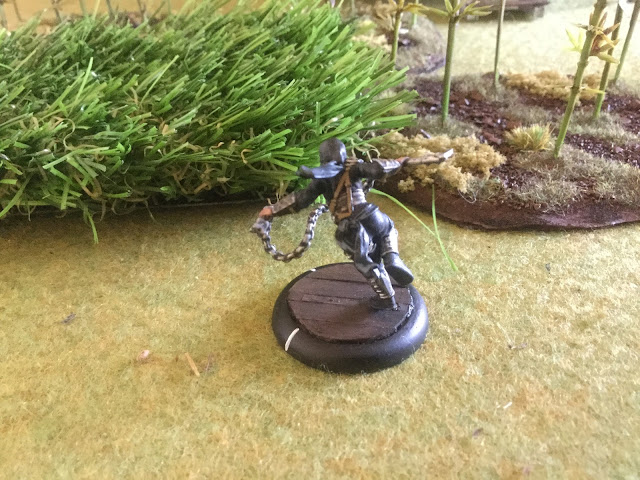 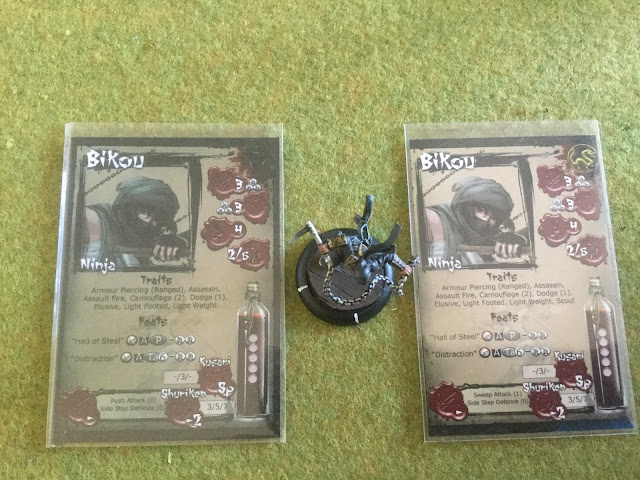 Next up is "the Golden Sentinel".  This guy just looks the business, tough and competent - which he most certainly is.  He will act as bodyguard to some of my weaker but important characters that influence the game without getting into combat, acting as their sword and shield. He is very useful as he can fight for Temple, Prefecture as well as Ito which I don't have or plan to have...... just yet :-)

The Golden Sentinels are the bodyguards of the Emperor’s clan, guarding the family on their travels, in their homes and in court. They also serve as escorts to his Teishin as they journey his Empire spreading his holy word. If the Teishin of the Imperial court are the Emperors voice in distant more barbaric lands, then the Golden Sentinels serve as his shield, all proven warriors, sworn to protect their charges with their lives if needed. 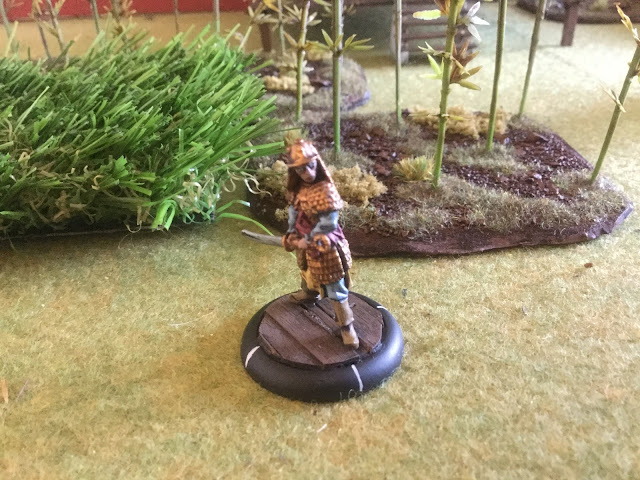 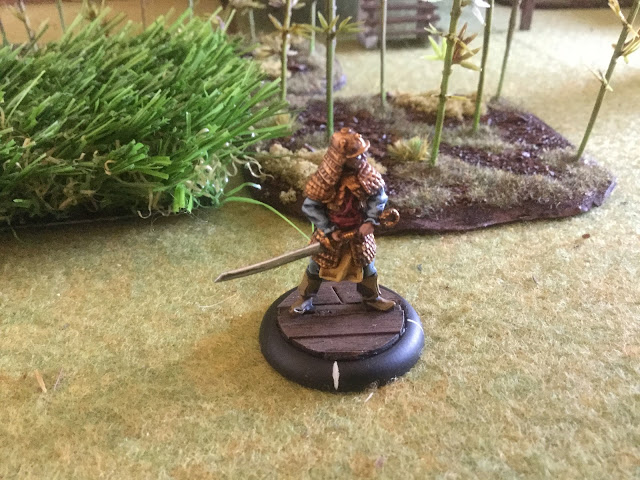 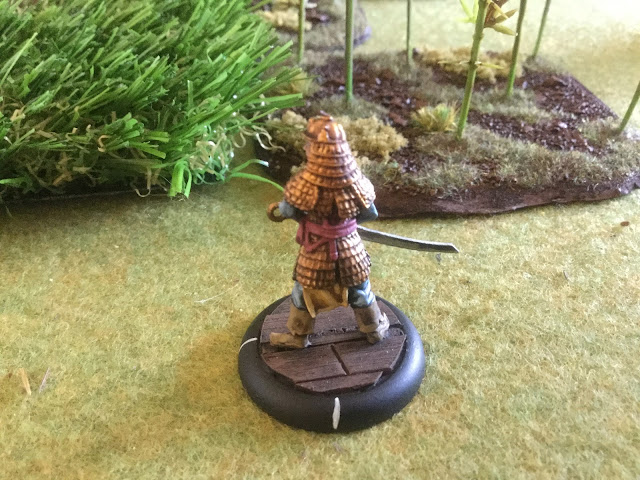 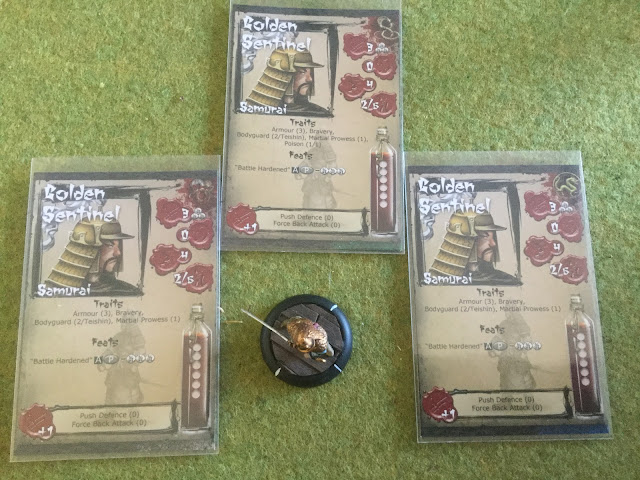 Lastly we have "the Kappa"  Again GCT haven't put out any blurb regarding this fellow but he looks to be based on the Japanese Yokai bearing the same name.  Kappa translates as "River Child" and is a Suijin or water deity. In folklore there are several conflicting ideas about the level of malevolence that the Kappa possess, ranging from the trickster to rapist and murderer.  Because of this GCT have opened Kappa up and he is available to all factions in the game and therefore ideal for me! There are more than eighty other names associated with the Kappa  in different regions, including kawappa,  gawappa,  kōgo,  mizushi,  mizuchi, enkō,  kawaso,  suitengu and dangame. Along with the oni and the tengu, the kappa is among the best-known yōkai in Japan. Important to note is that the name "kappa" is not the official name for the creature or even the most commonly used name so much as its the name most well known outside of Japan. 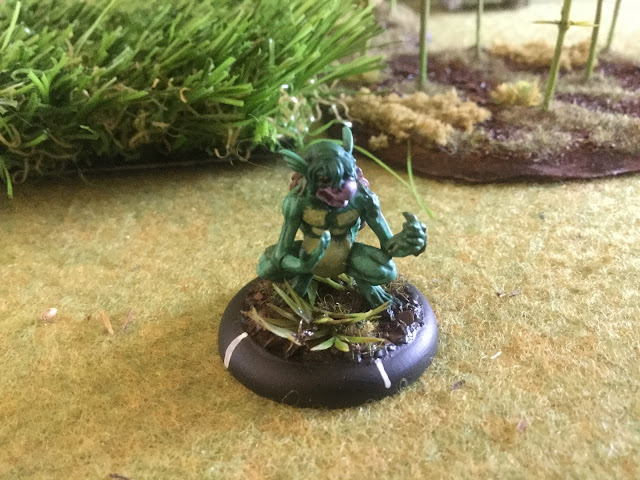 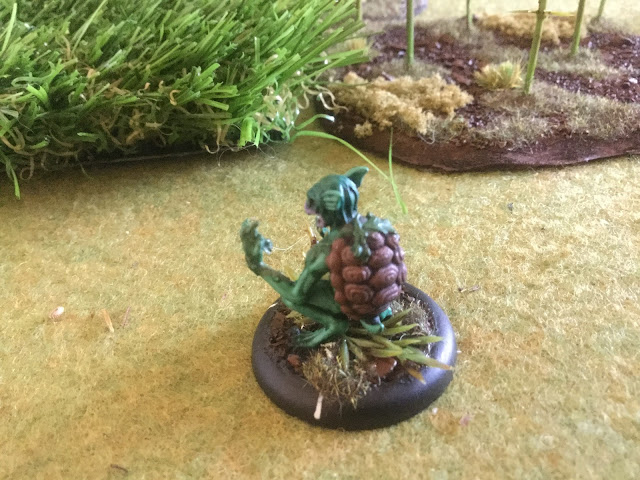 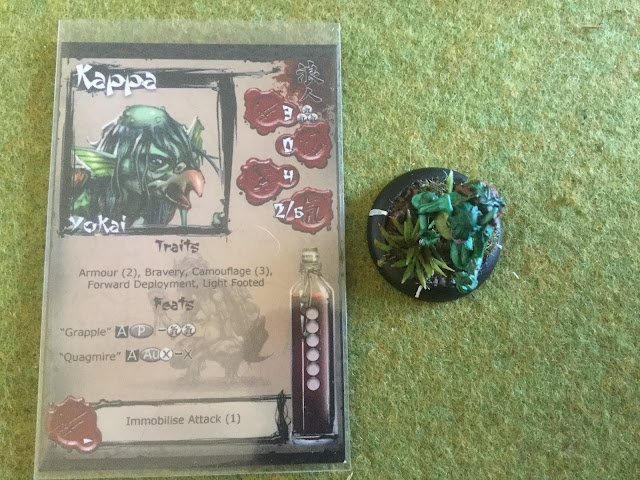 All of the above I painted more or less in line with how the Studio had them depicted (although not to that standard obviously) with only a few little deviations to tie them into my factions, hence the Grey Pilgrim has an orange sash as well as a blue stripe to her robe, also encouraged by some of the messages I received regarding kanji on Genji's yari, i replicated it on hers albeit with the kanji for lightning!  Bikou was a fairly neutral black combo as befits a ninja, there was an issue with a missing part - the ribbon sash flowing at the back of the miniature but a quick email to GCT and with some excellent customer service, quickly dispatched it out to me.  With the Golden Sentinel and Kappa I left the deviations out as they had to cover the most factions....

Another little side project that I've been working on is a safe place to roll some dice, i've been getting fed up with losing dice off the table, cocked dice and all the other misfortunes you can have and after seeing Bryan's (of Vampifan fame) excellent Goki Wooden dice plate earlier on this year, which you can see here, i decided to do something about it.  The project got sidelined with other priorities coming to the fore including my obsession with Bushido, but with another uni deadline coming up my procrastination skills rose to the fore and the dice plate became a distraction....

So with that in mind I cast about for a suitable vessel when I found the perfect thing.  A large (empty) coffee container i found lurking in my loft that I had chucked up there thinking one day it might come in useful (i don't even drink coffee, i think i'm part womble....lol). Now in Bushido both opponents roll dice at the same time, so as the container is so big, i thought why not do two! 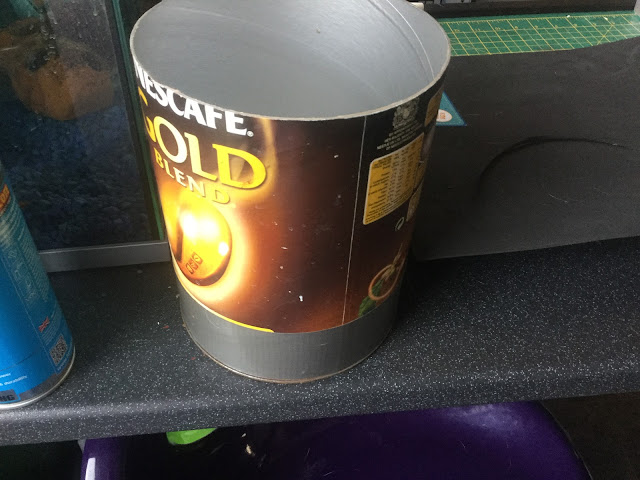 I used gaffer tape to mark a straight edge around the circumference at the top and the bottom of the container and to provide an extra level of strength to the cardboard body. 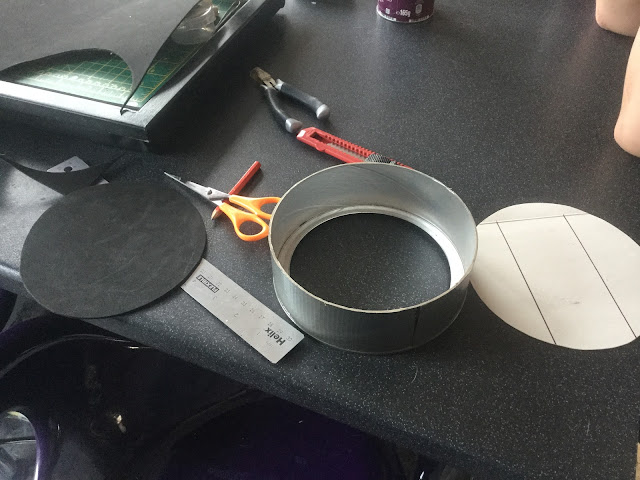 Obviously one end had a bottom already but for the other I had to cut a bottom out of a piece of cereal box. Which I then gaffer taped in place using the lip of the top of the container to hold the card in place.  I also cut a circle of my favourite foam which is nice and soft and will absorb some of the energy of the rolling dice and prevent them from bouncing out ready to line the bottom of the trays. 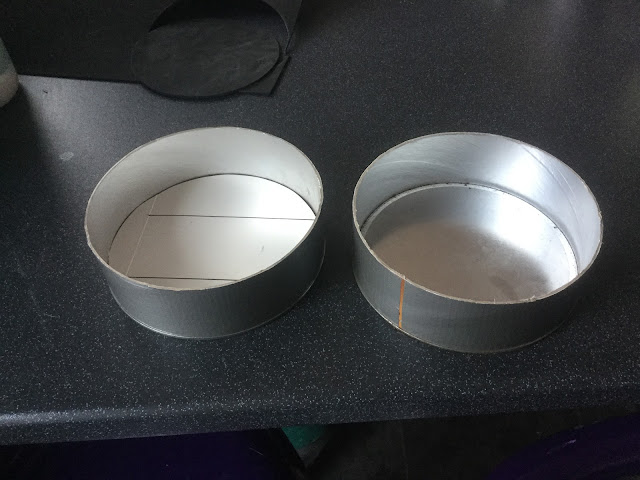 Ok, so I can't just leave it all rough and ready like that, although it will certainly do the job I do prefer to have things a little neater. 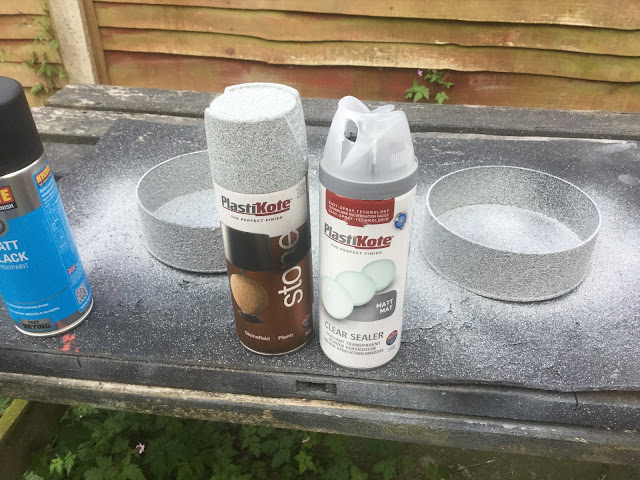 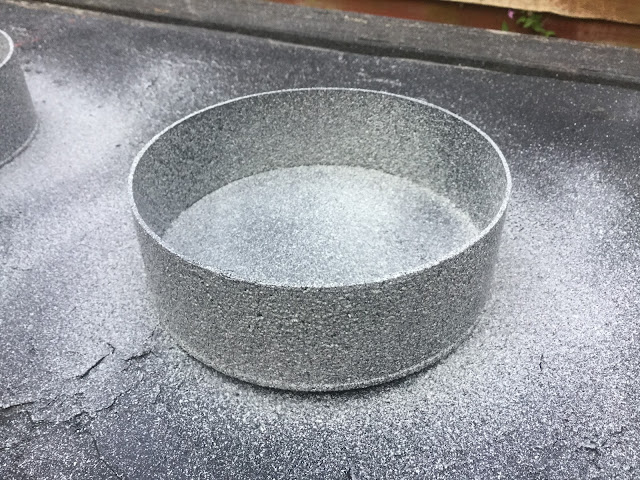 So we have the tray, I could just add the foam to line the bottom and it being black it would look neat and tidy but i took it a step further... 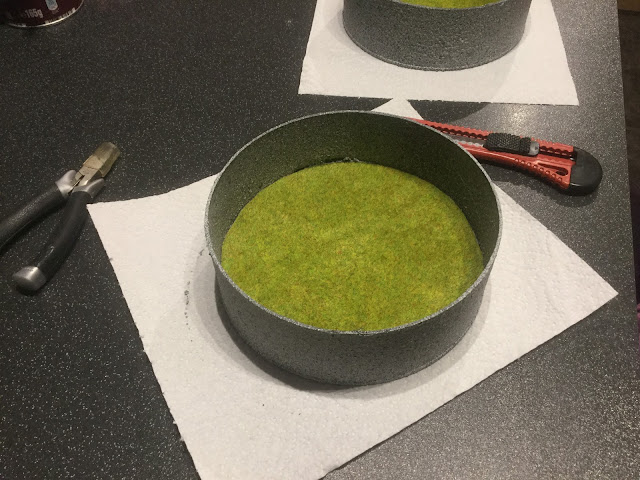 and added a grass mat that I've had lying around for years and have been chopping up for various projects including my terrain boards for ATZ and Bolt Action.  This looks aesthetically pleasing and has the added benefit of adding that extra energy absorbing power! 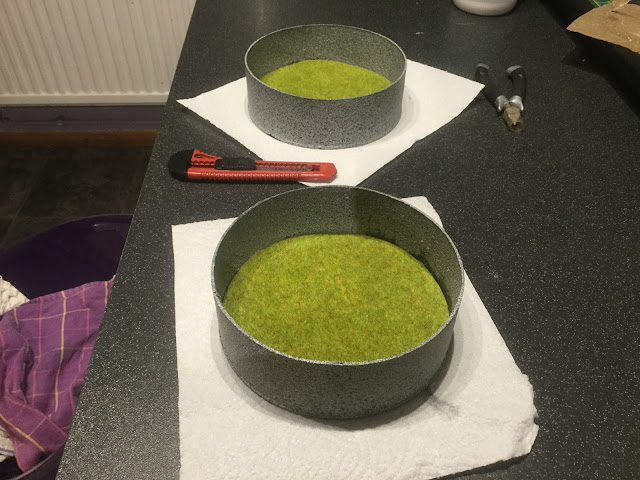 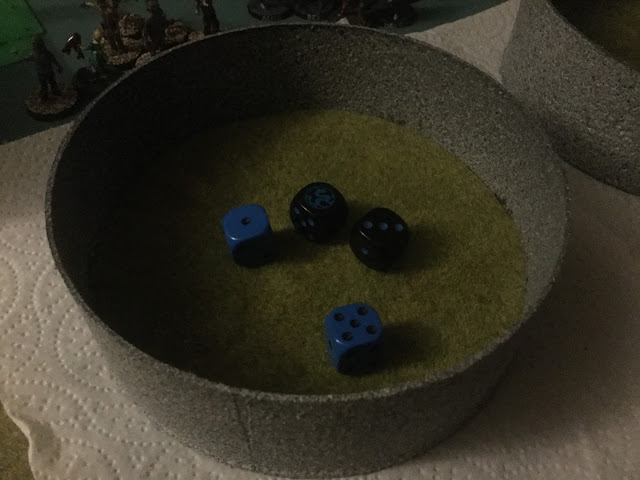 and with my Bushido dice in play. So there we have it a pair of dice trays ready for my first games. Thats all for now....