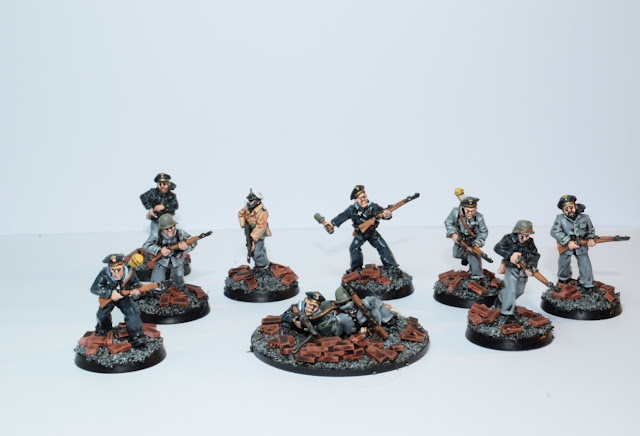 So my second infantry squad is a squad of 10 Kriegsmarine drafted in to fight in the dying city.
At midnight on the 24th April 1945 Hitler gave an order for 5000 Kriegsmarine sailors to be FLOWN into Berlin to assist in the defence of the city. These would predominantly come from training regiments situated on the Baltic coast and Baltic islands. A brief account of one of the units that was to be sent into Berlin:
1 Schiffstamm-Regiment (1st Naval Instruction Regiment) under the command of Kapitan zur See Herbert Zollenkopf and comprising three training battalions was one of the units ordered to Berlin. Orders were issued for Operation “Berlin” and the personnel were issued with food, ammunition, weapons, Panzerfaust and a few Panzerschrecks. An “alarm” battalion under the command of Kapitanleutnant Franz Kuhlman would be the first to be flown into Berlin. Flying these personnel into Berlin was given the highest clearance and a largest capacity transport squadron was to be used to fly them in. 5-6 JU-352 transports took off on the night of the 25th intending to land at the small Berlin airport at Gatow as the main Tempelhof aerodrome was already being fought over and under Russian control. Only one aircraft successfully landed after attempting to land for two hours. At least two planes suffered damaged and returned to their home airfields and one was shot down with the crew surviving. In all perhaps no more than 80-100 Kriegsmarine of the 5000 demanded personnel made it into Berlin where they were employed in the defence of the Reichs Chancellery until the surrender of the city. Kuhlman survived the fighting and the war and would go on to write his memoirs.

The figures here are the Warlord games Kriegsmarine. They are great figures, superbly sculpted and I think posed excellently – no overly “heroic” poses. Are they accurate for Berlin though? The predominant clothing is leathers and combined with beards easily marks the majority out as a U-Boat crew. The three in dress uniform are probably acceptable but it is more than likely that the majority would have been wearing the dark navy blue working dress as in the photo below.  I do think these figures are excellent and they stand out immediately as something “different” so I will continue to use them. 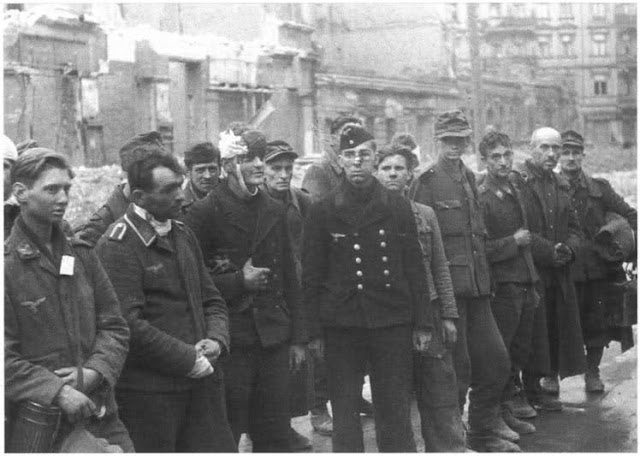 Please excuse the quality of the third photo – I’m no N4L behind the camera but I wanted to show a picture of the posters I managed to find in 28mm scale. 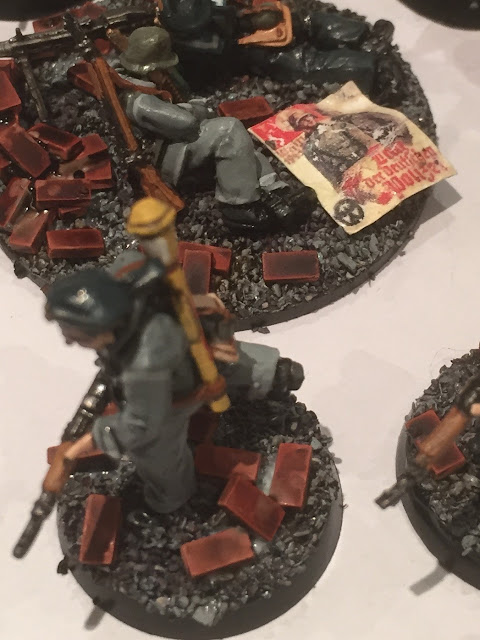 thanks Chris, this project just gets better and better