Tommy flinched as the first infected nurse reached for him, her snapping jaws coated in the fresh blood of her last victim.  At the last moment he remembered the golf club gripped in his sweaty hands.  With a savage swing he caught the nurse, whose name badge designated her as "Senior Sister Jo" under her chin, lifting Jo's head back with a snap.  Jabbing the club like a sword he smashed the heavy end in the ex-nurse's throat, shattering the trachea and collapsing the cervical spine.  With a crash, the ‘zombie’ fell to the tiled floor in a heap.  Tommy buoyed by his success, stepped over the former "Jo" and swung his club again aiming for the creature dressed in surgical scrubs.  This time he watched in horror as the 9 Iron bounced off the shoulder of the frenzied beast with no noticeable effect. Recoiling from the ‘zombie’, Tommy thrust out with the end of the club, forgetting in his desperation which end to use and poking the infected doctor in the eye with the grips.  Once again the creature ignored the petrified human’s pathetic attacks, almost lazily slashing the man’s forearm with it’s outstretched claw-like hand.  Tommy cried out in pain, pulling his wounded limb away and swinging the club in a wild arc.  With a crunch the heavy iron club pulped the temple of the beast and powered into the zombie’s skull, killing it instantly. 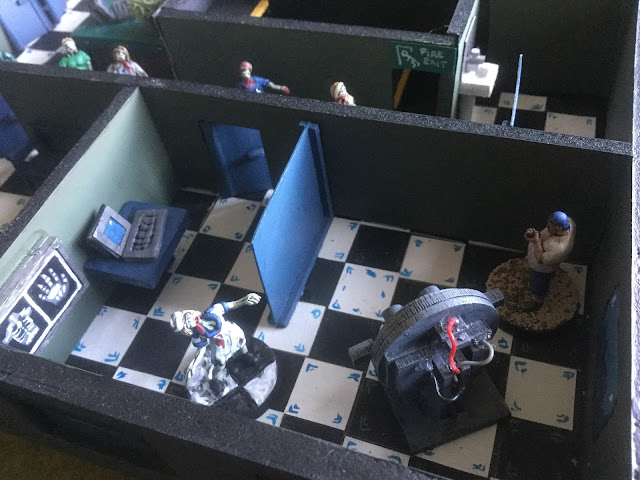 The long laceration to his forearm stung as sweat poured from Tommy as waves of fear, remorse, fear, revulsion and fear again swept over him. Turning his head, he emptied the contents of his stomach onto the blood covered tiles and over the two dead former medics. In a daze his eyes swept the room in time to see another of the infected lurching into the room, this time the sight however was too much for him to bear and the club dropped with a clang from suddenly nerveless fingers. 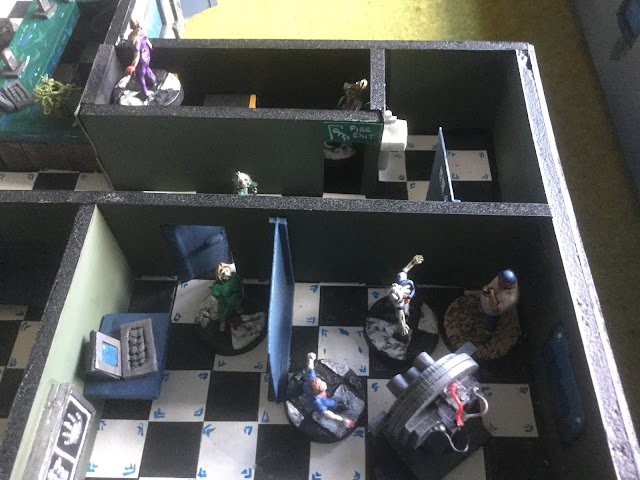 Gobbo pounded up the emergency stairs to the first floor, ahead of him Putters had at least stop screaming the name of her missing fiancé but the sound of her heavy, booted footsteps echoed down the eerily quiet, deserted corridors. Deserted that was, except for the cluster of infected at the far end by a door marked “pathology”. Determined not to lose sight of his crew mate, Gobbo put on an uncharacteristic burst of speed just in time to see Anna charge through the double doors leading to the wards. Hurrying to keep up, Gobbo thrust open the door to find the young medic staring wildly around the deserted ward. “CHRIS” she shrieked in a weird, half strangled cry that scared Andy who worrying about his crew mate almost forgot to pick up the packet of custard creams left by a former patient's relative, almost. 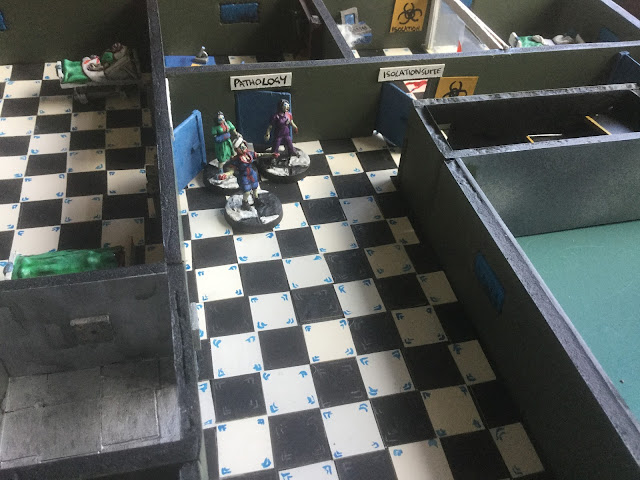 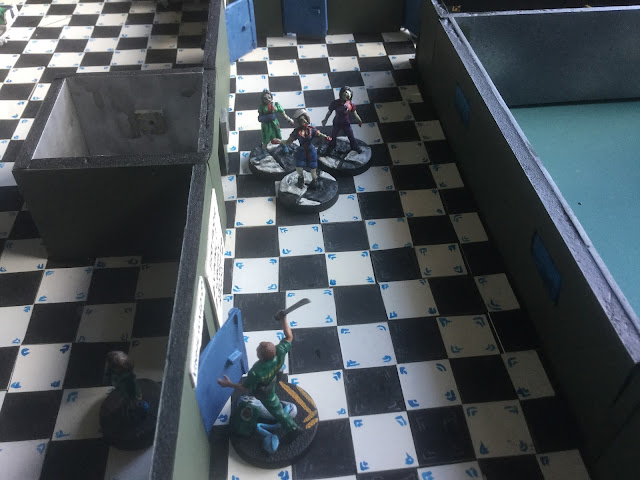 “Where can he be Gobbo?” Anna asked with a sob, “he's not here, tell me he's not one of those….things”she spat, her words laced with horror as she moved from one end of the long room to the other.

“lets search the rest of the floor first mate” Andy replied in his best soothing, don't poke the bear voice that he reserved for the worst of the angry drunks and off meds crazies.

“But…..” Anna’s voice trailed off as infected hospital staff and patients poured through the door that they had entered from. As one the medics sped toward the far door away from the ‘zombies’ and back out into the corridor. Ahead of them was a room marked “Pathology”, Gobbo grabbed the door handle and flung the door wide open revealing three ‘ex’ hospital staff lurking in the dark, hastily he slammed it shut and backed away. In the meantime Anna had reached a darker stretch of corridor down by the emergency stairs. In front of her a door, ominously marked up as the “Isolation Suite” and covered in bio-hazard markings loomed, a thin plume of smoke pencilled out from under the door jamb and an acrid stench leaked out from behind the portal. 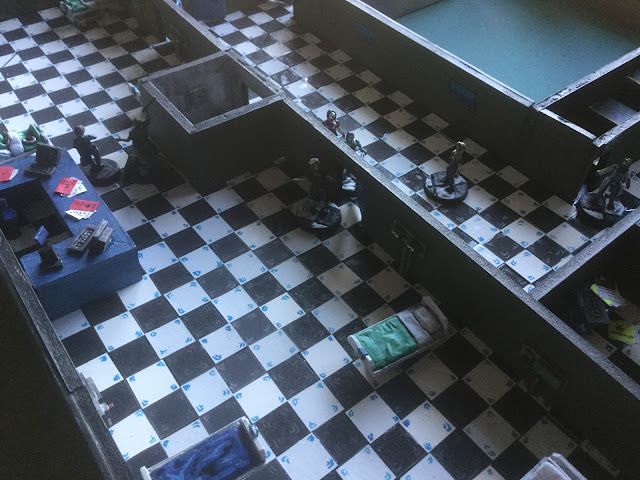 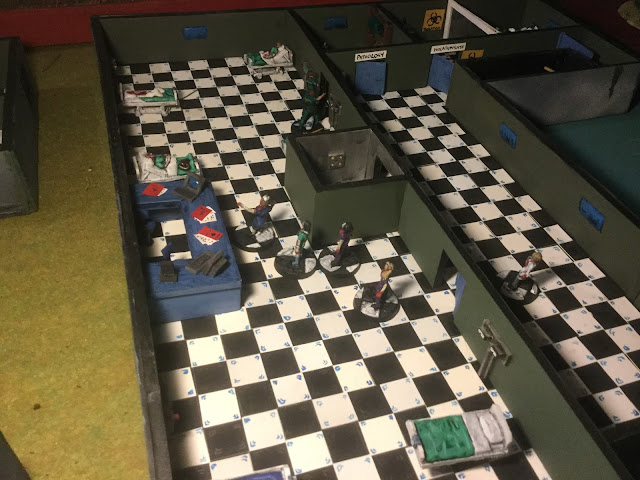 Tommy stared in horror as the clearly pregnant ‘zombie’ shuffled toward him, clutching her swollen abdomen. Bright blood swathed her upper thighs, visible below the hem of her hospital gown. Tommy backed away, his mind desperately trying to process the macabre sight of the poor woman who now staggered forward in an attempt to attack him. Sanity fled as the full weight of the events of the last 24 hours finally began to dawn on the former car salesman, the golf club forgotten he slapped her outstretched hands away and stepped back, bumping into the back wall. 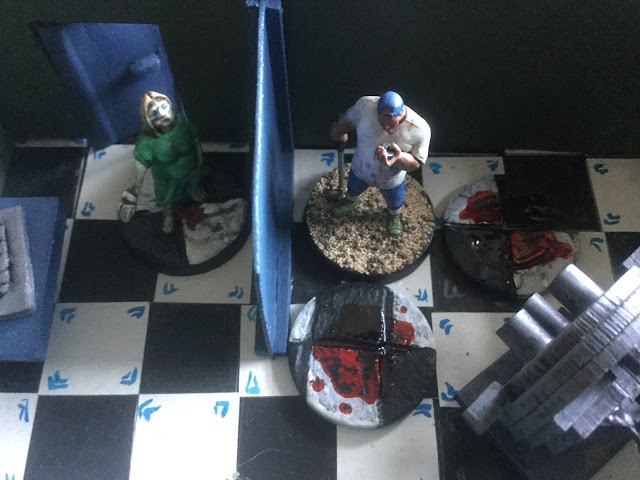