With a crash, Anna burst through the double doors at the far end of the emergency department.  Her agitation evident she hurriedly scanned the brightly lit corridor, looking for the signs to the Imaging department and oblivious to all else.  Gobbo following closely behind his crew-mate hefted the oxygen cylinder, acutely aware that the anxious paramedic was rushing blindly into danger, the infected had gained access to the hospital and could be anywhere.

As if in response to that thought, a low moan emanated from the far corner of the corridor to his left and the sound of shuffling feet drew his gaze toward an infected patient. Dragging his drip stand with him, the 'zombie' headed toward the medics moving slowly due to what could only have been poor mobility in life.  Gobbo grimaced as the smell of feaces and pus running from abscesses, that now were the least of the patient's concerns, wafted over to him with every swish of the patient's gaping hospital gown. 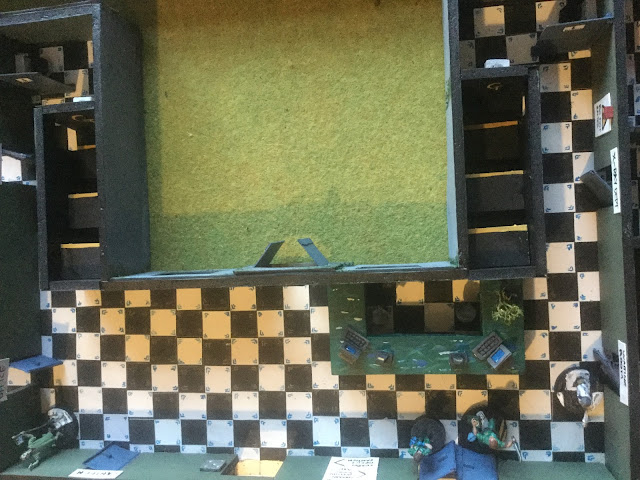 A growl from his immediate right tore his attention from the shuffling creature as an infected in a once pristine lab-coat stumbled from behind the reception desk.  With outstretched arms the once lab-tech desperately tried to reach the startled EMT, who stepped back in surprise.  Near gagging at the sight of fresh blood drooling from the infected's mouth, Gobbo thrust out with the heavy base of the cylinder smashing the bloody teeth back into it's throat.  With a roar of defiance, the medic chopped down with the metal tube onto the forehead of the former NHS worker, splitting it's skull and dropping it to the floor.

Putters stared at the approaching 'zombie' that staggered toward her, this was the closest she had got to the infected and the sight of the former patient tore at her heart.  First and foremost she was a paramedic, a person who had dedicated a sizeable portion of her young life to studying how to save lives and promote health in her patients.  The shambling creature in front of her was the antithesis of all that she had worked toward.  With a clang the oxygen cylinder she had carried with her dropped to the floor, rolling a few feet toward the struggling Gobbo. The infected patient reached out toward her, as if to embrace her.  Anna flinched as the cold, lifeless  hand brushed her face before entangling in her hair, pulling her toward the snapping teeth of the 'zombie'.  [Putters failed her citizen brown pants test and could only draw her break melee roll, she now counted as unarmed]

Seeing Anna frozen in the face of the patient, Gobbo kicked at the cylinder rolling around on the floor, sending it bumping into the paralysed paramedic with some force and causing her to stumble backwards away from the grasp of the 'zombie'.  With a cry of alarm, she lifted her arm as if to ward off the foul creature and somehow managed to topple the drip-stand that the infected was still, inexplicably dragging along.  Tangled up with the tall, metal pole and the plastic tubing, the former patient tripped and fell to the floor, landing awkwardly. With a loud crack that resounded down the corridor, the infected's head twisted backward, hyperextending it's neck and snapping the vertabrae.   With a final twitch, the infected human lay still in a heap of medical equipment.  [She still won the combat but after two draws]

Anna stood stock still as the implication of the sudden assault and the consequences of her subsequent actions hit her.  She had taken a life, albeit in self defence.  Her crew-mate had done the same and the bodies of their "victims" lay side by side in the hospital corridor. Doubt struck her hard, rocking her back on her heels, what if there was a cure for the infection that was driving these people to attack their fellow man?  What if she had been able to restrain him and let the doctors work on the disease that was the root cause of all this madness?  She and Gobbo had had their fair share of drunks and other patients attacking them in the course of their duty, diabetics in hypoglycaemic crisis often lashed out in their confusion, but this felt different somehow. This time the patient's looked different, they looked "hungry".

Gobbo could see that his crew-mate was struggling with what just happened, despite her tough exterior Anna was a sensitive soul, passionate about medicine and dedicated to saving life.  He however, was having no such crisis of conscience.  A veteran of B movies and horror flicks, he had sussed out the zombie angle back on the street when he was protecting the ambulance from the creatures. As far as he was concerned he was putting the poor (dangerous) creatures out of their misery.  Grabbing his crew-mate by the arm, he carefully steered her around the pooling blood that spilled from the infected tech's skull and toward the Imaging department. 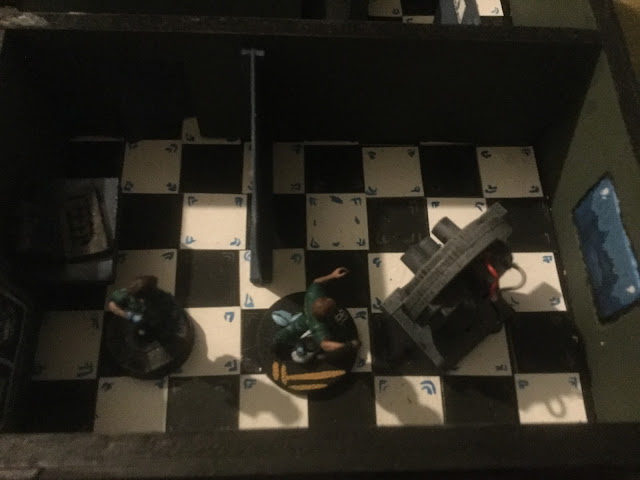 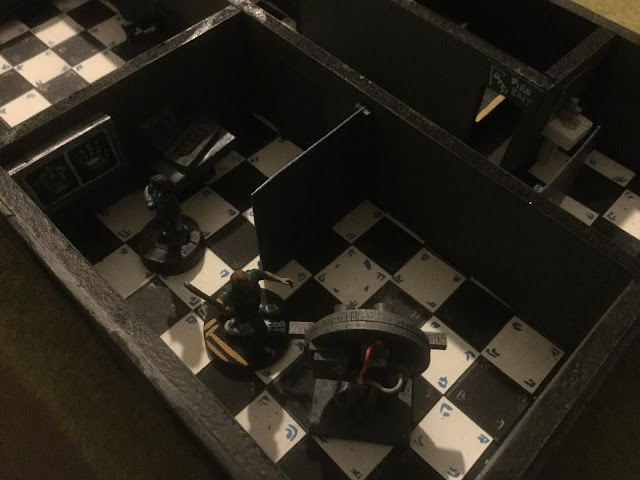 Just a short distance from the ED the medics skirted the waiting room that had previously been overflowing with desperate folk, cradling bloodied and broken limbs or looking for missing or injured loved ones.   Heading into the Imaging room, Gobbo lead the way, absent-mindedly pocketing the Snickers bar that was sitting on the radiographers  work station.  "Waste not, want not" He muttered to himself.

A high pitched scream shattered the relative quiet of the department causing the medics to spin round, a child – six or seven years if she was a day tore full pelt past the startled ambulance crew. Putters reached out to grab the child, who without breaking stride, deftly dropped her shoulder and shied away from the paramedic.   Behind the little girl, at the end of the long corridor, four snarling ‘zombies’ pursued her with outstretched arms, desperate to attack the fleeing child. [this was an event where the dog appears with a load of zombies following it, but as we're in a hospital…] The astonished medics watched as the girl flung herself at an air vent that had been pulled off the wall, barely big enough for her lithe form she wriggled once before disappearing from sight, leaving the adults to deal with the infected bearing down on them.

Closer and closer, the ‘zombies’ lurched toward the frozen medics. Gobbo slowly reached for his trusty oxygen bottle, his hand grasping for the handle as he scrutinised the approaching infected. “Wait a minute” he thought to himself as the ‘zombie’ closest to him appeared to wink in his direction, “what the hell?” He realised he'd said out loud as the lead monster stood more upright and stopped staggering closer. 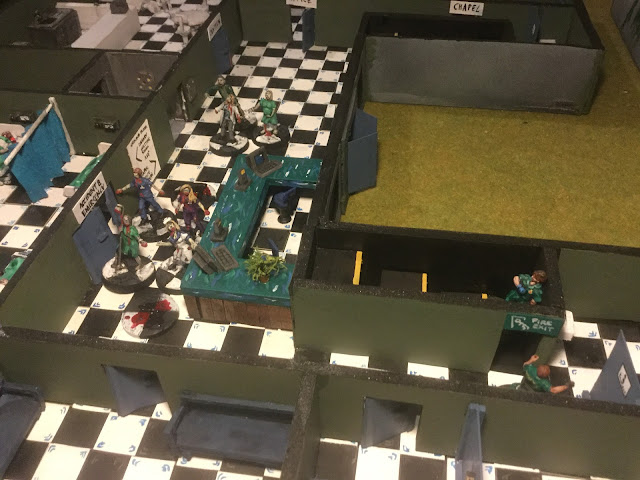 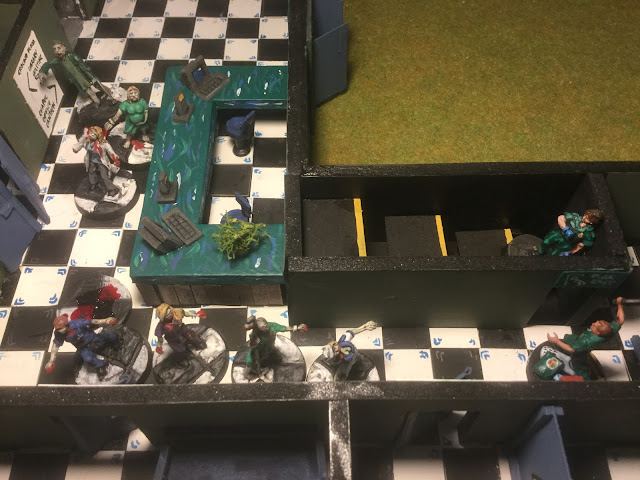 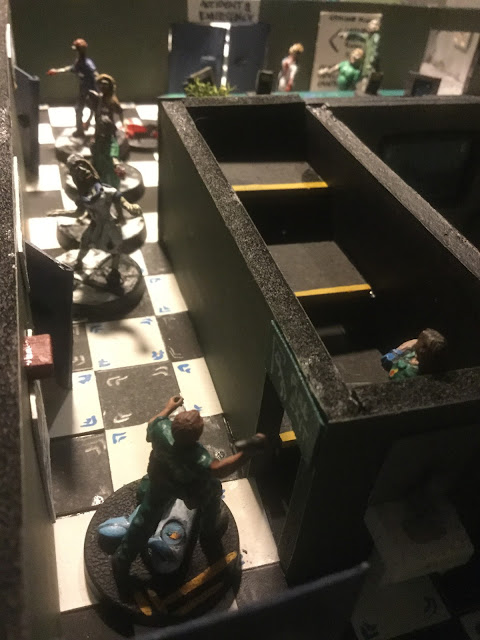 “Wait, wait, don't hit me with that thing!” Shouted the creature as, with a flourish, the ‘zed’ threw off the filthy, blood soaked gown to reveal itself to be an uninfected man armed with a golf club. Quickly stepping away from the ‘zombies’ the man, using the club to hold off the infected, shouted at the medics hysterically to help him. Andy lifted the heavy cylinder onto his shoulder and took a step forward intent on jumping into the desperate melee.  Behind him, Anna pounded up the stairwell screaming her fiancé’s name. Torn, the older medic took another step forward before loyalty to his crewmate won out, throwing an apologetic shrug at the struggling man he  ran up the stairs after his frantic partner. [event – one of the zombies reveal themselves to be a human, the meet and greet didn't go well]

Tommy watched the EMT pound up the stairs after the younger medic in despair.  swinging his nine iron in a wide arc to create some space he ducked into the imaging dept in an effort to put distance between him and the crazy people trying to eat him!   Hiding behind the looming X-Ray machine, Tommy tried desperately to catch his breath, he wasn't used to all this exercise – just the occasional evening at the Manston driving range and the massive surges of adrenaline was causing his heart to lurch in his chest. Since this morning he’d seen his best mate ripped apart by a group of school children, Bloody children for Christ's sake! With their milky eyes and jerking movements, they had scared the bloody life out of him.  The violence was something that he'd never witnessed before outside of films and he'd hidden behind some nearby bushes until the screams of terror and pain had turned to the pitiful mewling cries of a broken human.  Shamefaced at his cowardice and consumed by grief, he ignored the dark stain spreading across the front of his jeans and gripped the club’s handle with slippery palms. 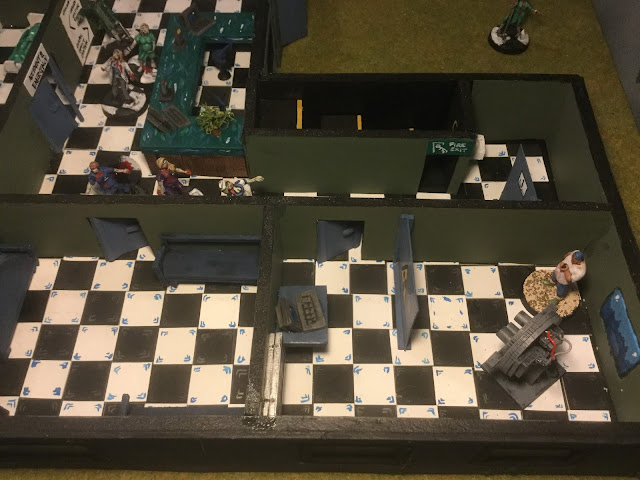 “Right” he muttered to himself, “let's not be a big girl’s blouse old son and fucking have them!” Tommy attempted to gee himself up, he needed to be angry not scared, he needed to use the adrenaline that flooded his systems to fight these things, he needed to…the dark stain got bigger as the doors to the imaging room crashed open and the infected poured through.

that's it for this part, concluding part next time
hope you enjoy
dGG
Posted by Da Gobbo at 07:54